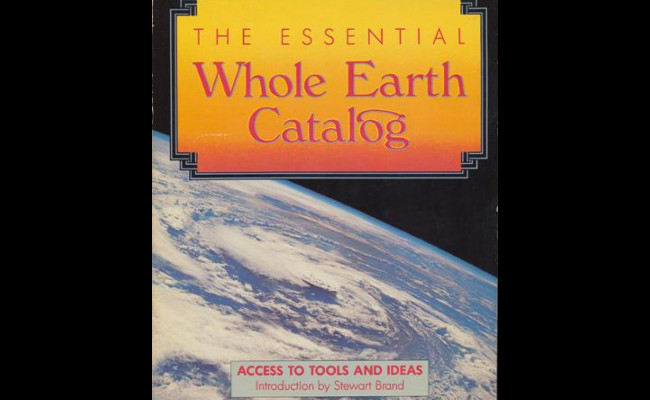 Beneath infrastructure lies a philosophy — but what happens if you trace it all the way down, back to the beginning? It’s been said that many decades ago a kind of proto-culture had begun to brew that allowed the information revolution to happen. And one of its chief tools was the strangely influential “Whole Earth Catalog,” which turns 50 this year.

The paper catalog, beloved by hippies and counter-culturals of the day, also turned out to be “at the core of the entire Silicon Valley revolution,” John Perry Barlow once quipped.

To celebrate the occasion John Markoff penned an op-ed in the Los Angeles Times in which he calls “The Whole Earth Catalog” the Google search engine of its day. It’s a comparison first made by Steve Jobs, who shared his own fond memories of the Whole Earth Catalog in a commencement speech in 2005, calling the magazine “one of the bibles of my generation… It was idealistic, and overflowing with neat tools and great notions.”

That gave it more impact than just a search engine in print, Markoff suggests. “Using a search engine is akin to taking a rapid trip down a long hall to find what you are hunting behind a door. In contrast, the ‘Whole Earth Catalog’ was like a seemingly endless hall of adjacent doors — all open, easy to peek into,” he wrote.

Markoff — who’s currently writing a biography about the catalog’s founder, Stewart Brand — argues that the magazine “resonated with a generation who had grown up in an upwardly mobile but stale society.” Some editions were more than an inch thick, and its mission was straightforward. From the first issue in 1968, the catalog’s tagline was “access to tools.”

And at the very front of that issue Brand laid out their affirming philosophy. An item would be listed in the catalog if it was deemed:

A companion essay on the purpose of the catalog begins “We are as gods and might as well get used to it.” Decrying a world where gross obscures actual gains, it claims that “a realm of intimate, personal power is developing power of the individual to conduct his own education, find his own inspiration, shape his own environment, and share his adventure with whoever is interested.

“Tools that aid this process are sought and promoted by the WHOLE EARTH CATALOG.”

Only a 1,000 copies were printed of that first issue — though eventually the magazine would sell more than two million copies. It spoke to that moment in time, according to Fred Turner, the author of “From Counterculture to Cyberculture: Stewart Brand, the Whole Earth Network, and the Rise of Digital Utopianism.” “Between 1966 and 1973, conservative estimates suggest that 10 million Americans were involved in communes,” he told one interviewer in 2006. “Brand speaks to that group by promoting the notion that small-scale technologies like LSD, stereos, books, Volkswagens; are tools for building new alternative communities.”

In that interview, Turner tries to trace its connection to the later information revolution. “We tend to think the internet’s arrival changes everything. My own sense is that the internet arrived in a cultural context that had already begun to change things.”

Last year author Tim Ferris quipped in a podcast that Stewart Brand is like Forrest Gump — he turns up at every historical moment. Brand reportedly operated the camera at “The mother of all demos” in 1968, which unveiled the first complete computer hardware and software system to the ACM/IEEE Computer Society’s Joint Computer Conference in San Francisco.

And in 1966 Brand made buttons to campaign for NASA to release its satellite images of the earth. The buttons’ simple message? “Why haven’t we seen a photograph of the whole Earth yet?” He famously included NASA’s image on the cover for the first issue of the “Whole Earth Catalog.”

A former army paratrooper, Brand was just 29 when he came up with his new big idea — while flying home from his father’s funeral in Nebraska, remembers one history. “He was reading a copy of Barbara Ward’s “Spaceship Earth“ and trying to answer a pair of questions: How can I help all my friends who are currently moving back to the land? And, more important, how can I help save the planet?”

Brand had originally visualized a tricked-up truck offering a store on wheels, distributing useful materials and advice, including “dandy survival and camping equipment” — and, as an adjunct, a catalog describing everything that the truck would have for sale. Brand and his wife actually did tour the USA in 1968 on a “commune road trip,” making educational stops with a 1963 Dodge truck — but it was more practical to distribute a catalog through which people could contact the vendors directly.

The End Was the Beginning

Brand’s visions seemed to keep finding their way out of the catalog and into the real world. For the last issue Brand even commissioned an entire novel from writer Gurney Norman, which was threaded throughout the catalog’s 452 pages and then published later as a separate book. (The novel tells the story of a hippie’s “awakening” during a cross-country road trip.) 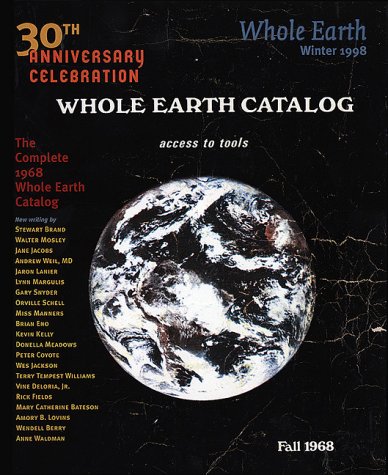 But the Whole Earth crew continued to have an impact in other ways, according to one series of interviews in 2009. Environmental activist Huey Johnson remembers saving six rivers in California in the late 1970s by gathering enough signatures to help pass a federal law — and he believes that it only happened because “the Whole Earth Catalog guys showed up with this massive, magical box. You put paper in one end and it came out somewhere else. It was this amazing machine called a fax.”

But its real influence was on the culture itself. In the same set of interviews, architect Richard Wurman remembered that “In the early ’70s, the public didn’t know what a yurt was, or where to buy one. But if you were interested in moving back to the land and needed sturdy, cheap housing, this was invaluable information. I think you can draw a pretty straight line from the Whole Earth Catalog to a lot of today’s culture.”

John Perry Barlow also remembered that the Whole Earth Catalog spawned several other influential projects, including an online community called the WELL (which stood for Whole Earth ‘Lectronic Link). It’s where Barlow first met John Gilmore and Mitch Kapor, the future founders of the Electronic Frontier Foundation. “Brand wanted a gathering place for people interested in new technology and he wanted to give those people a more interactive forum than they could get in the magazine. The WELL was it. Pre-Internet, this was the bulletin board for the digerati.

Brand and his Whole Earth associates also helped organize the Hackers Conference, attended by roughly 150 influential programmers, engineers, and designers, including Steve Wozniak, Richard Stallman, Ted Nelson, John Draper. It’s been said to have helped establish the independent spirit that underlies the internet today, and it’s at this conference that Brand himself coined the phrase “information wants to be free.” 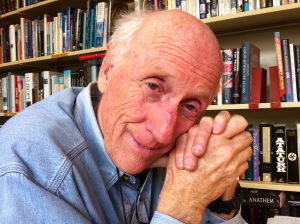 So maybe that revolution never really ended — and to this day you can still see echoes of Brand’s limitless faith in our human potential. Brand, now 79, is still at work on a project called “Revive & Restore“, a biotech-oriented conservation group that wants to revive extinct species like the passenger pigeon, putting to good use that biology degree he earned at Stanford in 1960. Its slogan is “building the 21st-century genetic rescue toolkit for conservation.”

“I find things and I found things,” Brand says on his web page. He writes modestly that he simply finds ideas (and tools) as well as people and books, “which I blend and purvey.”

The Move Toward Simplicity: Why a Single-Vendor Approach to AI-Powered Automation Matters
December 31, 1969