Why Do Contestants Keep Underbidding on ‘The Price Is Right’? A Behavioral Economist’s View

one economics writer explored 47 years worth of bids on "The Price is Right," the longest running U.S. game show in history, where contestants guess the prices of consumer items. Behavioral economist Jonathan S. Hartley at Harvard's public policy and public administration school wanted to understand why contestants seemed to be underbidding more often than they used to.
Dec 1st, 2019 6:00am by David Cassel 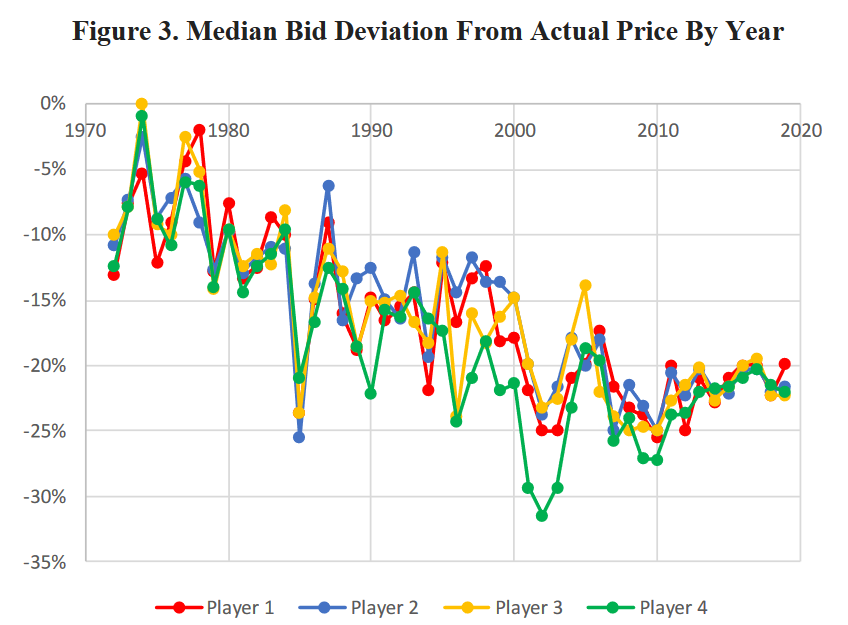 The first question confronting a data analyst is always: where can you find good data? And more than one researcher has apparently found a treasure trove in the annals of daytime television game shows.

This month saw another example, as one economics writer explored 47 years’ worth of bids on “The Price Is Right,” the longest-running U.S. game show in history, where contestants guess the prices of consumer items. Behavioral economist Jonathan S. Hartley at Harvard’s public policy and public administration school wanted to understand why contestants seemed to be underbidding more often than they used to.

But he also proposed some interesting theories which have real implications for understanding consumers — which is always a crucial first step in understanding whether an economy is heading towards a recession — and offer fresh insights into how new technologies may already be changing our everyday world. It’s another example of what seems like a silly question that could ultimately end up having real utility in the years ahead. And it shows how economists are tapping our modern online communities as a new source of data — while also offering a fun glimpse at the world of academic economists in action.

On his web page, Hartley describes himself as “an economics writer and researcher with interests in macroeconomics, finance, and sports analytics,” and with an MBA from Wharton and a B.A. in economics from the University of Chicago, it might be safe to call him an economics whiz kid. He’s previously worked at Goldman Sachs Asset Management as a Fixed Income Portfolio Construction and Risk Management Associate — and as a Dallas Cowboys Statistical Analyst. His personal site says he’s also had “various roles” at both the Federal Reserve Bank of New York and the Federal Reserve Bank of Chicago, and his writing has appeared in Forbes, the Wall Street Journal, and the Financial Times, among other outlets. In 2017 he appeared on Forbes’ “30 Under 30” Law & Policy list.

Hartley’s paper, “Inattention and Prices Over Time: Experimental Evidence From ‘The Price Is Right” argues that the show’s five decades of data makes it “a natural experiment to understand how attention to prices has changed in recent decades.” Nearly 30,000 times, the show’s jovial hosts have summoned four excited contestants from the audience to “come on down” to guess the price of a suite of prizes.

But over the years, Hartley notes, they’ve been underestimating those prices “with an increasingly greater magnitude.” Are we becoming less attentive to the price of goods?

With a total of 29,622 showdowns to consider — with four bidders each, or a total of 118,488 bids — Hartley recognized his own golden opportunity, to “draw several conclusions about how price-bidding behavior and information has evolved since 1972.”

Where does one even get such data? From The Price Is Right Episode Guide, of course, an online treasure trove of data “which houses over 5,000 show transcripts.” That site describes itself as “a project that is both epic and foolhardy in scale,” noting nearly a dozen and a half people who’ve recapped individual episodes, as well as dozens more who uploaded their videos of the episodes to YouTube. Thanks to the generosity of these volunteers, there’s data available from literally thousands and thousands of episodes available from most of the last five decades. He also double-checked the official Consumer Price Index for the last 47 years and found that the prices of the game show’s prizes were keeping up with the rate of inflation.

Variance in item prices hasn’t changed too much over time and the average and median price of the items have tracked inflation closely pic.twitter.com/mZeBRweiEU

After crunching all the data, a clear pattern emerged in the results. “The average bid deviations across recent decades… have fallen from approximately -5% in the 1970s to approximately-20% in the 2000s and 2010s.”

Of course, there’s another factor at work. The last bidder knows that all bids are disqualified if they’re over the actual price of the prizes — so one common strategy is to bid $1, signaling their cheeky confidence that everyone else has bid too high. If this happens more often, it obviously drags down the average bid, and Hartley reports that the final player is twice as likely as the others to offer up a bid of just $1 — and that this is happening more frequently the longer the show stayed on the air. “It’s possible that contestants learn from watching successful $1 bids on the show over time and that the frequency of $1 bids slowly influences more $1 bids.”

But fortunately, he’s ready to adjust his statistics for that, by re-running the calculations without those anomalous $1 bids, and by also calculating the average annual median deviations for each season of “The Price Is Right.” 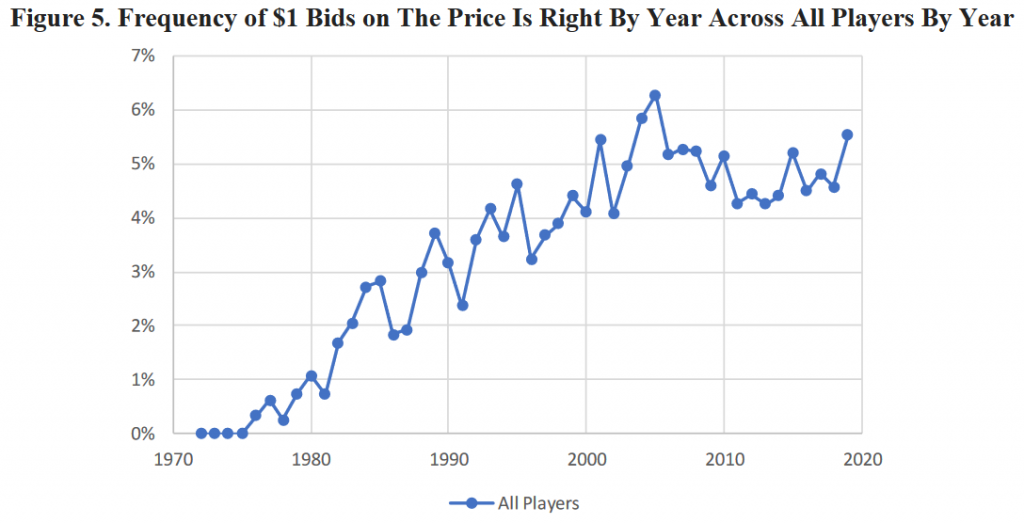 While it may seem like a trivial exercise, “These results have several implications for the formation of inflation expectations and price dynamics,” Hartley writes.

For example, Hartley also noticed that the deviation of the bids correlates to expectations for inflation, based on the official University of Michigan inflation expectation figures for the same month in which those bids were made. “A 1% increase in University of Michigan inflation expectations is associated with a 1.37%, 0.81%, 0.79%, and 2.63% in ‘The Price Is Right’ bids relative to the item price for Players 1-4 respectively…”

He posits that maybe people just stop paying attention to prices when inflation is low. But he also points out that over the last nine years there’s been less volatility in prices over time — so there’s been less overall benefit in knowing the prices of goods. And maybe younger generations just don’t have as much experience with inflation, he suggests, citing one 2016 study that found people “overweight” the inflation they’ve experienced throughout their lifetime when formulating their expectations for future inflation.

And for that matter, it also seems like consumers might simply be reacting to a technology-induced change in the marketplace. Hartley summarizes one 2018 study which reported that online competition “has raised both the frequency of price changes and the degree of uniform pricing across locations in the U.S. over the past 10 years.” Offline retailers follow the behavior of their online competitors, so that even if you wanted to track prices carefully, this higher frequency of price changes makes it harder to do. And there’s another possible factor: more product differentiations.

This all makes life difficult for contestants on “The Price Is Right,” Hartley suggests. “It may become exceedingly difficult to have the required price information [to] guess item prices more accurately.”

So while the rules of the game show haven’t changed, the world of consumers has gotten much more volatile. Life experiences have also changed, while even inflation itself has been somewhat tamed from the unpredictable spikes in the 1970s. It all offers one more way to assess the half-century gone by, and to reflect on the changes we’ve seen in our time — and the new technologies in our world today, as we head into December of 2019.

And if you’re picking up gifts for a special someone this year, it’s one more reason to ask yourself… if the price really is right?