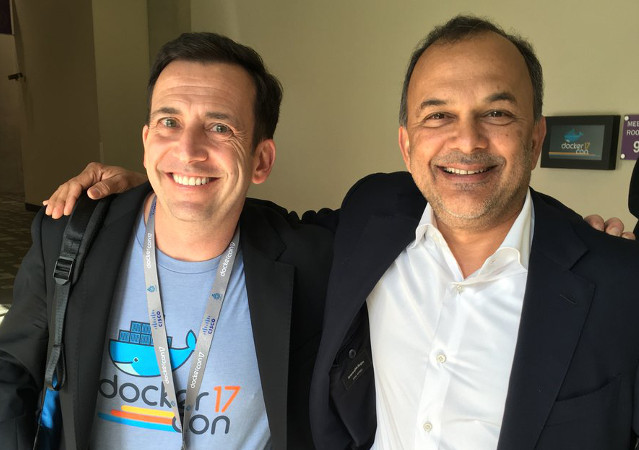 In a completely unanticipated job swap whose timing — two weeks after the company’s annual user conference — is raising eyebrows, Docker Inc. announced Tuesday morning that Ben Golub is leaving the chief executive’s post, stepping into a director’s role with the company.  Steve Singh, previously Docker’s chairman but, more importantly, the CEO of SAP-owned travel management firm Concur, will assume the CEO post, on a timetable that has yet to be announced.

“I am incredibly humbled and honored to have been a part of this journey,” wrote Golub in a company blog post published Tuesday morning.  “While there is always some uncertainty about changing roles, I am 100 percent certain that Steve is the right person for Docker.”

Although the idea of the transition may have been on the minds of Docker Inc.’s senior leadership since Singh was invited to join its board of directors in June 2016, during the company’s developer conference in Seattle, there’s evidence that the move to execute the transition was relatively sudden. Had a transition itinerary been in the works for some months, it could have been announced at DockerCon in Austin two weeks ago, giving the community an opportunity to celebrate.

Just last March — only weeks ago — Singh put his own face and voice behind an ambitious, next-generation corporate credit card project, called CenterCard, in a high-fanfare announcement. At that time, Singh told GeekWire he had invested his own money into Center, a joint-venture firm for the project along with Concur, for which he planned at the time to serve as chairman. It certainly appeared at that time that Singh’s future was paved, greased, and in high gear.

Then just after the last DockerCon — just five months after being brought onto Docker Inc.’s board last November — an obviously saddened Singh left Concur, a company he himself founded and guided to a successful acquisition by software giant SAP.  Judging from responses on LinkedIn, Singh’s Concur colleagues were heartbroken, giving the impression that he was much beloved and will be deeply missed.

So it’s interesting to hear Singh say that one of the key factors that triggered this decision was Docker’s people.

“I not only love the mission of Docker, but frankly, really like Ben and Solomon,” Singh told The New Stack Tuesday morning, just minutes after Docker Inc. broadcast its news.

“Look, I’m in a really fortunate position in life where I get to choose what people I want to hang out with, and what I want to work on,” the new CEO continued.  “And I love passionate people who work to create the opportunities. And that’s what Ben and Solomon are to me.”

Singh stated that Golub approached him a few months after joining the board, to ask the veteran CEO whether his experience would help Docker’s growth potential. At first, Singh said, he responded that Golub had everything Docker needed at the time to succeed. Golub had previously been CEO of virtual storage firm Gluster, including during its takeover by Red Hat, and before that was CEO of social business contact firm Plaxo.

At some point, Singh continued, the entire board became involved in the discussion, and a transition plan began to take shape.

Dan Scholnick, a general partner with venture capital firm Trinity Ventures and a member of Docker Inc.’s board himself, told The New Stack that Golub’s health was not an issue in the transition.  Rather, he characterized the move as a “natural transition” for the company.

“Even though the announcement would look like a kind of sudden, shocking thing,” said Scholnick, “decisions like this — especially with a company as important as Docker, and frankly with SAP and Concur — are not decisions that are taken lightly or done quickly. I know that it was a very difficult decision, personally and emotionally, for Steve to leave SAP, and to leave the company that he had been at for a very, very long time.”

Could there be a sudden urgency, however, to make a number of investment analysts’ predictions come true: to pre-condition Docker for a similar kind of acquisition as Concur with SAP?  Scholnick’s response, while on the negative side, was not without some wiggle room.

“It’s not specifically about conditioning Docker for an acquisition,” the VC leader told us, “but it’s definitely about growing our revenue aggressively and scaling the company aggressively. Docker’s revenue is already growing very quickly, and it’s getting to a scale where it needs somebody like Steve to help oversee the growth.

“My attitude, as a venture investor at Trinity Ventures and a board member at Docker is, you don’t build companies to sell them. You build companies with the intent of creating a valuable, long-lasting asset. And that’s what we’re trying to do at Docker. If somebody tried to buy it along the way, then you evaluate that when it happens.”

“Docker has the capital it needs to execute on its plan and become a cashflow-profitable business,” Singh told us. Having said that, we will certainly be opportunistic. And to the extent that we find capital available to us at compelling value, then we’ll look at it. But the sole purpose of doing it, should we raise any additional capital — and I emphasize the ‘should we’ part — is to accelerate our focus on innovation, and to accelerate our focus on the enterprise.

With respect to whether that acceleration to which Scholnick referred pertains to the long-anticipated initial public offering of Docker Inc. stock, the new CEO told us only this: “We see an incredible opportunity to build a great company, and an IPO is just a step in that process, and that will be some time, obviously, in the future.”