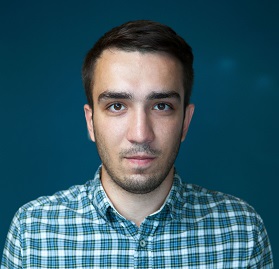 Myron Monets
Myron Monets is a Marketing Assistant at Mobilunity — provider of remote development teams. He is passionate about IT, sports and music. Being a part of Mobilunity team gives him the opportunity to do all of that, starting with learning about new technologies from experienced specialists to playing soccer and music with them.

The emergence of the Internet of Things (IoT) marks a huge milestone in the advancement of technology, as it has opened up a whole new world of possibilities in the technology sector. It has brought the full power of the internet into a plethora of devices, infrastructures, appliances, even to humans and animals who are implanted with or are connected to some electronic device. Thanks to the IoT, we now see homes with doors, lighting, heating and cooling systems controlled through smartphones and adjusting automatically as residents go about their daily lives; smartwatches and fitness bands that can automatically monitor your vital statistics throughout the day and alert you when something unusual is detected; and smart vehicles that can alert the driver when a component needs repair or special attention.

State of the Art in IoT Development

Here are some of the newest and most exciting IoT products currently in operation.

Smart buildings are simply buildings that use IoT technologies to achieve automation capabilities for controlling various systems within the building such as lighting, security, heating, and air conditioning. Smart buildings make use of different sensors and actuators installed in various parts of the structure to enable IoT devices to detect a wide range of environmental factors and automatically control various components within the structure. Benefits of adopting smart buildings include increased efficiency in energy usage, lower long-term operational costs, and better resource management.

Smart cities are basically cities that utilize IoT devices to collect large volumes of data on various activities in different locations, and then analyze and process these data to gain useful insights into the collective behavior of the general population. Such insights are useful to make data-driven decisions and to identify key areas that may be improved on. Smart cities typically combine smart buildings and smart infrastructures for this purpose. Among the primary motivations for adopting smart city, architectures are to increase operational efficiency, reduce operational costs, promote environmental sustainability, and improve overall management of the city.

Support for the smart city vision is growing, with around 72 percent of building managers who are familiar with IoT believing that IoT will define city operations in the coming two to three years.

An IoT developer is in charge of the implementation of an IoT product or solution, a task that is naturally multi-faceted and involves many different task categories. This includes, for instance, hardware prototyping, hardware programming, software programming, application deployment, network configuration, and data analytics.

One major concern that businesses have with adopting IoT solutions is the security aspect. With the proliferation of news on security breaches in internet-connected systems of different companies, it’s easy to get skeptical of embracing technological innovations, including IoT. However, security breaches are often a sign of weak integration of security measures in the architecture and design of a system, something that may be avoided by skilled developers who are knowledgeable with standard security best practices. An IoT developer is therefore responsible for ensuring that any IoT product implementation uses strong and state-of-the-art security measures to make it extremely difficult to break the system.

The easiest and quickest way to get started with IoT development is by using one of the many available IoT platforms. Here are three of the most popular platforms you can use right now.

Microsoft’s cloud solution, Microsoft Azure, offers a healthy amount of cloud services, including virtual machines, mobile applications services, storage solutions, database management systems, and messaging platforms, among many others. It also offers its own IoT platform, the Azure IoT Suite, which provides a collection of Microsoft Azure services that are targeted for use in IoT product development, including remote monitoring of IoT devices, downtime prediction, integration with existing systems, enhanced IoT security, and business intelligence. It pricing options are one of the lowest among the prominent IoT platforms. Microsoft Azure holds a 20 percent cloud market share, showing a year-over-year increase of around 25 percent, and is the second largest IoT platform today.

Google offers a similar cloud computing service in the form of Google Cloud, which is popular for its cloud computing services, platform as a service, scalable NoSQL database systems, machine learning engine using TensorFlow, and document-oriented database as a service. Its IoT capabilities are likewise collected within the Google Cloud IoT platform. In terms of pricing, it typically comes a bit more expensive than Microsoft Azure, but still less than Amazon Web Services. Google Cloud Platform holds a 12 percent cloud market share, up from 10 percent in the previous year for a 20 percent year-over-year growth, and is the third largest IoT platform available today.

Far in the lead in the cloud computing race is Amazon Web Services, Amazon’s own cloud offering. Among its main features are infrastructure as a service, cloud storage solutions, database system management, application and content migration, developer tools that make development faster, as well as machine learning capabilities. IoT-targeted features are available through the AWS IoT platform. It is arguably a more expensive option than the rest of the competition, but it’s far ahead of the pack in terms of market share, with a 62 percent cloud market share, over three times as much as the second most popular option, although this is down from last year’s 68 percent.

The Internet of Things is pushing current technologies to their limits, enabling individual and systems of objects to connect to the internet and communicate with other objects. Together, these objects facilitate the full automation of systems that can improve themselves through the analysis and processing of collected user data. We have taken a look at the promising applications of IoT, some useful IoT development skills, and a couple of popular IoT development platforms you can take advantage of to quickly develop IoT application and minimize IoT developers rates. There’s no better time but now to jump onto the IoT train and hire an IoT developer who can help adopt the IoT technology within your business.

SHARE THIS STORY
RELATED STORIES
How Prescient Devices Uses Time Series Data for IoT Automation 4 Supply Chain Security Threats and How to Handle Them Edge Computing vs. Cloud Computing 5 Supply Chain Security Trends Spotify: Bigger the Codebase, the More Challenging the Migration
Google and Microsoft are sponsors of The New Stack.
SHARE THIS STORY
RELATED STORIES
Making It Easier to Build Apps with Time Series Data Pinterest: Turbocharge Android Video with These Simple Steps Couchbase’s Managed Database Services: Computing at the Edge 7 Edge Computing Uses You Should Know Creating ‘Offline-First’ Applications for Wi-Fi Dead Zones
THE NEW STACK UPDATE A newsletter digest of the week’s most important stories & analyses.
The New stack does not sell your information or share it with unaffiliated third parties. By continuing, you agree to our Terms of Use and Privacy Policy.