An Israeli startup is bringing gamification to developer training to help software engineers skill up beyond "Hello World."
Dec 12th, 2022 8:21am by Loraine Lawson 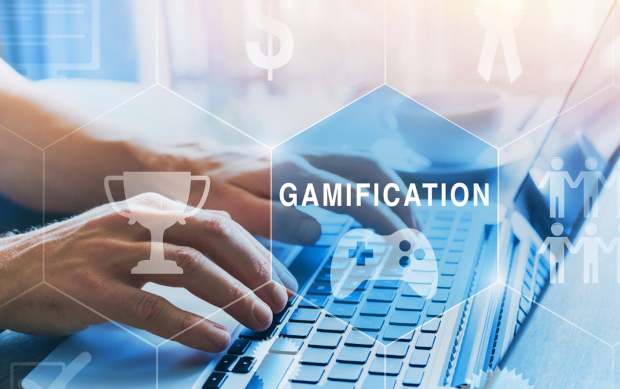 If you didn’t grow up with Choose Your Own Adventures stories from the 1980s, well … I’m sorry. They were awesome: You started the adventure, chose a path and it either moved you forward in the story or you died; in which case, you backed up and gave it another go. Good times.

What if you could bring that same element of play to your development as a software engineer? That’s basically the idea behind the startup Wilco, which offers simulated developer training games.

The Israeli startup released an SDK Tuesday that allows individuals to create and share their own development quests. Wilco is also running a quest-building hack-a-thon event through January to encourage developers to create games that teach a development skill.

A Quest in Short

The quests use a fantasy company — Anythink — to simulate real-world production-like systems with logging, monitoring, analytics, load balancing and real data sets tasks for developers. The simulations all revolve around real-world tasks, such as finding a performance problem in production and determining the root cause.

“When it comes to software engineering, people think that it all boils down to the language, but the skills required to be a good developer are the skills beyond coding — the combination of soft and hard skills that you pick up along the way, and you can pick it up in any stack,” On Freund, the company’s CEO and co-founder, told The New Stack. “That’s why if I had two candidates, one of them with 10 years of experience who has never touched my stack, the other with a year of experience solely in my stack, all things being equal, I’m going to prefer the one that has 10 years of experience, even though I have to teach them the specifics of my tech stack.”

Those are the types of high-level, veteran skills around which Wilco’s quests revolve. The quest happens within a faux Slack channel — called Snack in the game — where developers interact with virtual co-workers. You can be assigned a new task and co-workers can assist you with the development quests. Quests might be as “simple” as setting up your first Kubernetes instance (my current quest — and yes, I’m stuck) or building a frontend app that’s configured for cloud and integrates with a backend. Other quests in their catalog focus on bug fixes, observability, backend deployment, and identifying and resolving asynchrony issues in an application.

There’s support if you need it via the game’s own IT support guy, Joebroom Penalope Grantbranch, or Wilco’s Discord server. The game also connects with GitHub, allowing developers to build a portfolio of projects. 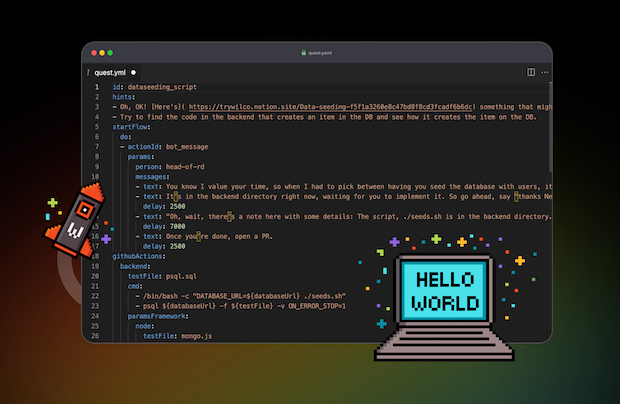 The SDK is mostly YAML-based, Freund said, allowing developers to create YAML files that detail the various scenarios. The platform is designed to teach developers skills rather than teaching languages, but currently, it supports practicing with Node.js, Python, Ruby on Rails and React. On the database side, it offers Postgres and MongoDB, according to Freund.

Wilco may be gamification, but the developer startup market drew about $37 billion in investments last year, according to Wilco. Frequently, though, these pieces of training are designed to let developers write their first code — “Hello, World” — rather than developing the more complex processes developers manage on the job.

“Demo sandbox apps and ‘Hello world’ tutorials don’t properly communicate the differentiators and value that a product offers,” Freund said in the press release announcing the SDK. “Developers need to get hands-on and use a product to solve a problem they’re facing, in order to fully understand its value.”

Early users of the editor include developer companies like CircleCI, Armory and Permit.io. Four observability-focused quests by New Relic, a design partner, have already been completed by thousands of developers. Other technology companies are leveraging the quests as educational or sales demos of their product to show how it would solve a real-world problem. At least one individual has used Wilco to build a job portfolio and land work, the company stated. 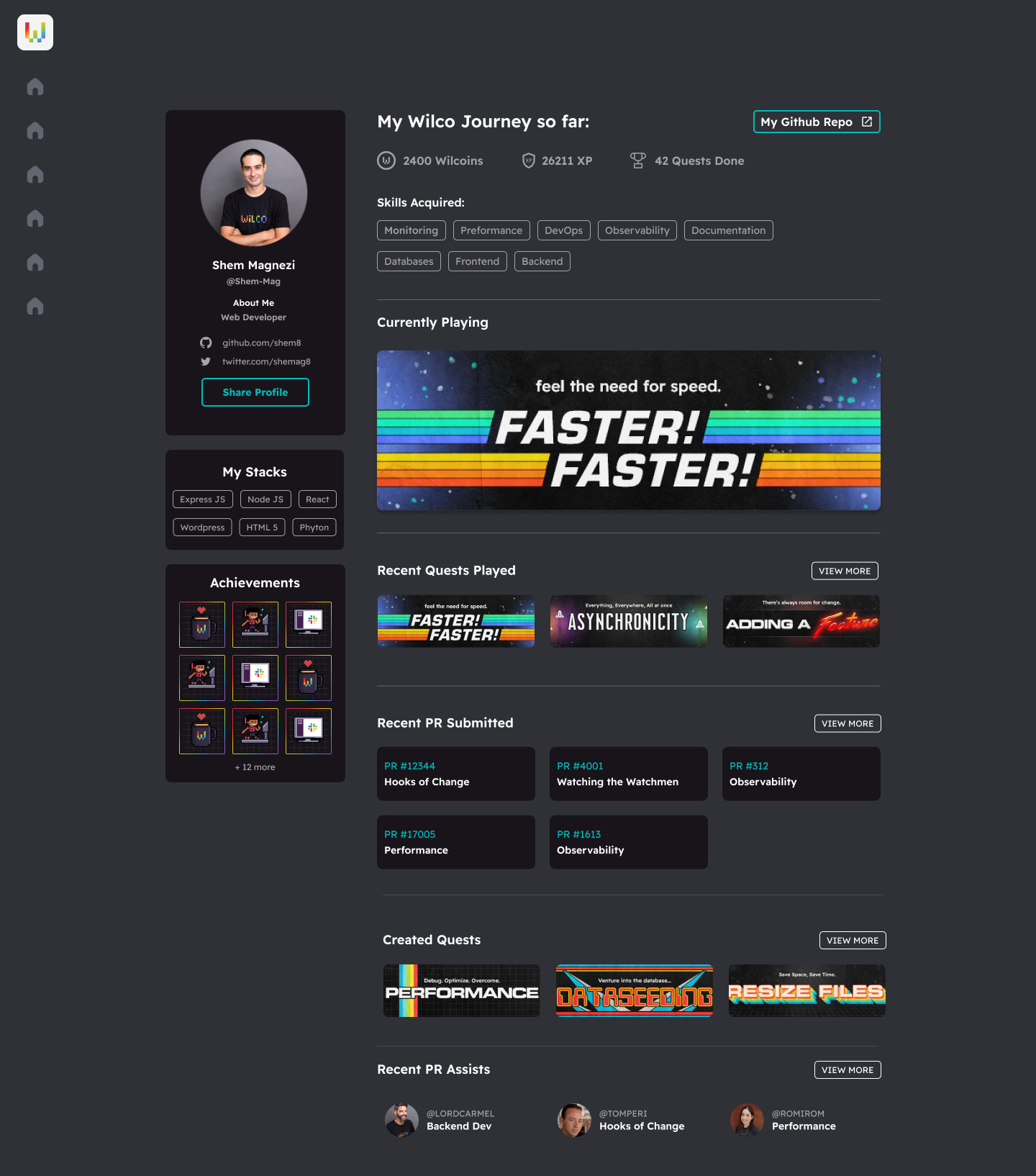 Another emerging use case Freund cited was using quests as a project post-mortem; rather than creating a tedious work document no one will ever read, it gamifies the process so it can be used as a learning experience for developers now and in the future. Quests are fairly quick to design, he added — during one hackathon with seven teams, in one afternoon, developers were able to create seven quests.

“What we suggest is what we call a quest mortem — build a quest that highlights that scenario and then people will not only get to experience it in a way more immersive form, they’ll actually want to experience it because they’re having fun,” Freund said. “Once you create enough of those quests mortems, you’re actually preserving the knowledge of the engineering team in the form of those quests. This is the knowledge that is basically disappearing in a regular team.”

Loraine Lawson is a veteran technology reporter who has covered technology issues from data integration to security for 25 years. Before joining The New Stack, she served as the editor of the banking technology site, Bank Automation News. She has...
Read more from Loraine Lawson
SHARE THIS STORY
RELATED STORIES
Google Roadmap: Flutter to Integrate with JavaScript, Wasm Why the Edge for Applications Is a Trend Heading into 2023 How to Support a Million Users on Your Website: A Success Story Prepping for 2023: What's Ahead for Frontend Developers 2022 a Golden Year as JavaScript Moves to the Edge
CircleCI and MongoDB are sponsors of The New Stack.
TNS owner Insight Partners is an investor in: The New Stack.
SHARE THIS STORY
RELATED STORIES
What It's Like to Run a Mastodon Server in the Musk Twitter Era An Inside Look at What GitLab’s Web IDE Offers Developers How to Work with Protocols and Get Started with ActivityPub Top 5 Internet Technologies of 2022 What Rust Brings to Frontend and Web Development
THE NEW STACK UPDATE A newsletter digest of the week’s most important stories & analyses.
The New stack does not sell your information or share it with unaffiliated third parties. By continuing, you agree to our Terms of Use and Privacy Policy.