Bluprint Teaches Kids to Code JavaScript in the Metaverse 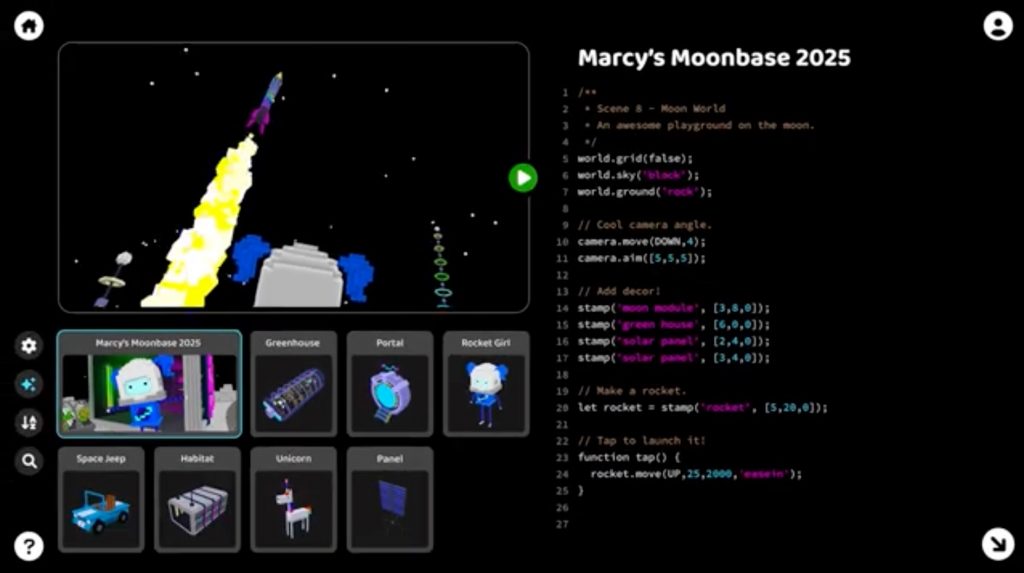 Bitsbox has been in the business of teaching kids how to code for the better part of a decade, and now the company is taking both its lessons and its code-teaching tools into the next level: the metaverse. Currently in development, a new app called Bluprint aims to be “a sneaky attempt to introduce real-life coding to kids who already love building 3D worlds (Minecraft) and playing online games (Roblox) with their friends.”

Bitsbox sought to teach kids how to code in much the same way that CEO/CTO Scott Lininger learned in the early 1980s, explained co-founder and chief creative officer Aidan Chopra in an interview with The New Stack.

“Scott was of the generation that learned to code with typing,” said Chopra. “If you wanted to run a program, you’d take the code out of the book, and then you had a game that you could play. From his point of view, that’s how you learned to program: you copy code off of something, and then it is sort of a muscle memory thing. It’s like learning to play music that someone else’s composed, you start to understand the patterns just by virtue of having copied it.”

Since its founding in 2014, Bitsbox has provided kids with a virtual tablet on a website, into which they copy the code that was mailed to them monthly. The code is a version of JavaScript and HTML5, as provided by a Bitsbox API, that reduces JavaScript into a “short and sweet library of programming commands, all carefully designed to be easy to type, easy to learn, and flexible,” according to a FAQ.

While this may have been how kids learned in the 1980s, Chopra said that it was the biggest complaint of users today.

“If you want to make anything of any complexity, it’s a few hundred lines of code, and typing that in is a pain in the butt, especially if you’re six,” said Chopra. “There’s a lot to be learned from actually reading existing code and interpreting it, especially if it’s commented well. It’s a really useful thing. So, we thought, let’s try something different.”

Moving to the Metaverse

That “something different” is Bluprint, the next iteration on Bitsbox. Bluprint not only moves its characters and interface into a three dimensional environment, it also alters its teaching tools to rely less on typing and more on reading and altering existing code — in much the same way developers can read, reuse, and alter code taken from the internet.

“There’s probably as much value in learning to read code as there is learning to write it, which is weird, because so much of coding education starts with a blank page,” said Chopra. “That’s not how we teach kids to read human languages. You start reading before you start writing. Everyone does. It’s odd that, to some extent, we teach coding in a very different way.”

The Bluprint metaverse comes pre-populated with objects and characters, which have code that can quickly be viewed and altered. It gives users a different way to interact with and learn code, one that can be layered from one level of difficulty to the next.

“We can actually scaffold the learning by saying: step one, look at the code and change something little about it (a string, a number) and then see what effect that has on its behavior. Or maybe add a new behavior by adding a couple of methods, or just activating them in some way, and see if that can work,” said Chopra. “It’s about changing something you see, it’s about adding something, and then, eventually, it’s about authoring things from scratch.”

The Bluprint metaverse is built with security and privacy in mind for its users (seeing as they’re often below the age of 12), and the worlds that they build are invite-only, with parental controls built-in. In terms of coding safety, Bitsbox and Bluprint co-founder Scott Lininger explained that “Kids can write any JavaScript they like. But… their code runs in a safe sandbox that doesn’t allow them to access private information, modify the webpage, open links, that sort of thing.”

Users can build objects in the metaverse itself using a familiar graphical editor, but the code for each object is just a click away, where users can not only edit attributes, but also get into topics such as functions and object-oriented programming. 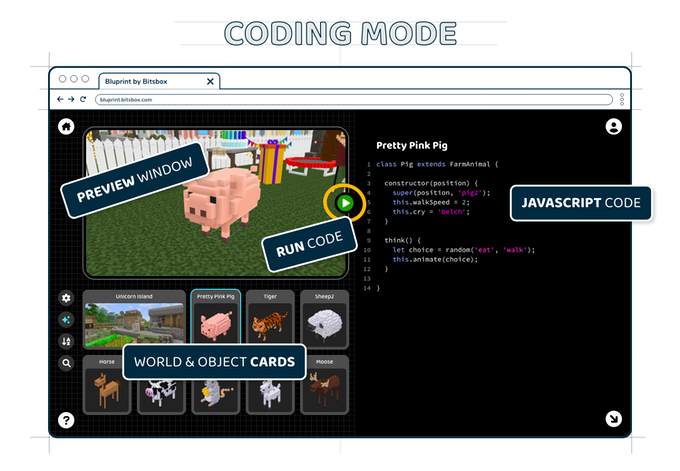 Differences from Minecraft and Roblox

Chopra explained that Blueprint came partly from seeing how excited kids were about Minecraft, yet unable to code for Minecraft, because doing so was far too difficult. With Bluprint, creating and altering code are intentionally integrated directly into the product; as opposed to coding for Minecraft, which Chopra said was “a little bit of a bolt-on and a bit hard.”

Much like its predecessor, Bluprint will teach kids JavaScript, although this time with a much larger and more functional JavaScript API. According to the Kickstarter for Bluprint, the company has taken the JavaScript API it used for Bitsbox and “extended it into 3D, added dozens of new methods, and added a file management system to make complicated projects possible.”

At the same time, the JavaScript API for Bluprint is still simple enough to teach kids how to code. Lininger offered a quick comparison between Roblox’s Luau, which provides an API on top of Lua, and Bluprint’s JavaScrip API, noting that “Roblox’s Lua API is fantastic, but it’s not terribly beginner-friendly.”

Lininger points to a LUA script in the Roblox documentation that takes 20-something lines of code to show the words “You pressed X” when you do so on the keyboard or a gamepad.

For even an amateur coder, the code offered can be a stretch to quickly understand. By contrast, the same effect is achieved with these five lines of code using Bluprint’s JavaScript API.

“We’ve heard from numerous parents that their kids haven’t been successful learning Roblox coding because it’s ‘too complicated,'” said Lininger. “We hope to make something that’s not intimidating, starts with success, and is really fun.”

Bluprint is currently in development, but Chopra said the team hopes to have an early version of Bluprint available in the coming months. And while Bluprint was first created with teaching kids to code in mind, he said it might just turn out to be something more, as well.

“It’s not like we’ve just created this Minecraft-y thing on the web with a really accessible API, so kids can learn to code with it. What we’ve actually done is maybe created the world’s most accessible Metaverse authoring tool,” said Chopra. “What if you actually made a tool so that it was possible for people who had never really programmed before, or made 3D stuff before, to participate in this Metaverse project? Could that be a force for good? And I think we’re sort of convinced that it might be, so at the same time that this is kind of a second product line for Bitsbox and our businesses teaching kids to code, we’ve also sort of developed this set of authoring tools for beginners to be able to build their own little corner of the metaverse.”

Mike is a freelance writer, editor, and all-around techie wordsmith. Mike has written for publications such as ReadWriteWeb, Venturebeat, and ProgrammableWeb. His first computer was a "portable" suitcase Compaq and he remembers 1200 baud quite clearly.
Read more from Mike Melanson
SHARE THIS STORY
RELATED STORIES
How Bad Are System Failures and Security Incidents? Wasm for the Frontend: A Look at Developer Use Cases Internal Developer Platforms Are for DevOps too Why Your Kubernetes Ship Is Sunk without Machine Learning End-to-End Test Troubleshooting
TNS owner Insight Partners is an investor in: The New Stack.
SHARE THIS STORY
RELATED STORIES
Nextdoor's Plan for Catching New Release Troubles Early on I Need to Talk to You about Kubernetes GitOps Microsoft Makes Azure Load Testing Generally Available How Bad Are System Failures and Security Incidents? Expedia: 3 Tips for More Effective Unit Testing
THE NEW STACK UPDATE A newsletter digest of the week’s most important stories & analyses.
The New stack does not sell your information or share it with unaffiliated third parties. By continuing, you agree to our Terms of Use and Privacy Policy.