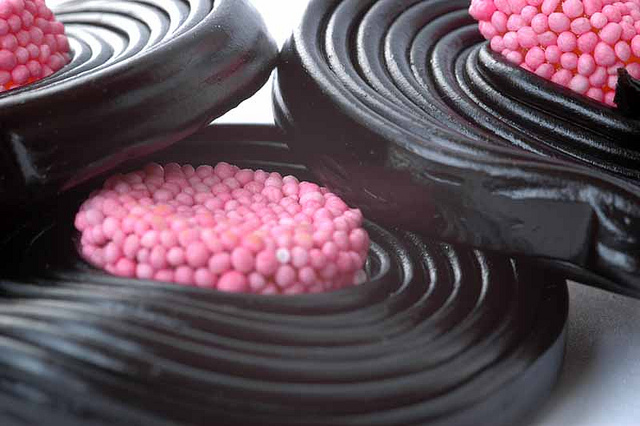 How can artificial intelligence help a food processor maximize yield from a licorice-extrusion machine? How can AI help a company that rents out LEGO sets quickly determine whether pieces are missing from returned sets?

If indeed software is eating the world, artificial intelligence is poised to take the next big bite, with highly targeted systems being developed for industries such as finance, healthcare, security and retail — and a bunch of other uses still in development.

IBM president and CEO Ginni Rometty recently predicted that within five years every important decision, whether in business or personal life, will be made with assistance with its Watson technology.

Yet in a Forrester survey, 58 percent of enterprises reported they are researching AI, but only 12 percent are now using it, underscoring the gap between its potential and actual practice.

The problem is that there are only about 18,000 data scientists and other pros with the skills to make use of AI technology. Berkeley, Calif.-based startup Bonsai aims to make AI technology more accessible to the world’s 18 million software developers, especially those who have little or no background in the technology.

“There’s a problem in the AI world that you have to pretty sophisticated with a lot of expertise in data science and machine learning to make effective use of it,” said Bonsai CEO and co-founder Mark Hammond. “We’re really trying to democratize it.

Market intelligence firm Tractica predicts the global market for AI applications will increase from $643.7 million in 2016 to $36.8 billion by 2025. It says low-cost, on-demand, and cloud-based AI frameworks will be key enablers of this growth.

There are three approaches to AI in the marketplace right now, with many organizations still trying to figure out how AI might be useful, according to Hammond:

Bonsai aims to provide a fourth option — to do for AI what databases did for data.

“Databases faced a similar challenge when they were brand new,” Hammond explained. “If you wanted to build an app that used data in a sophisticated way, you had to worry about a lot of low-level stuff, very much akin to using a toolkit.

“Databases said, ‘Let’s move the abstraction level up. Let’s give you an engine, the database engine, that’s going to manage all that low-level stuff for you. It can’t be magic, so it gave you a special programming language, SQL is a common one. Using that language, you can tell us about the abstractions around your data. Tell us what the data entities are, how they relate to one another, what kind of business questions you want to be able to ask about that data. And the database engine will use that information to go figure out how to do all that for you.’”

Similarly, Bonsai uses an AI programming language called Inkling, designed to represent AI in terms of what you want to teach instead of how it is learned. The key is focusing on teaching rather than learning, Hammond said. 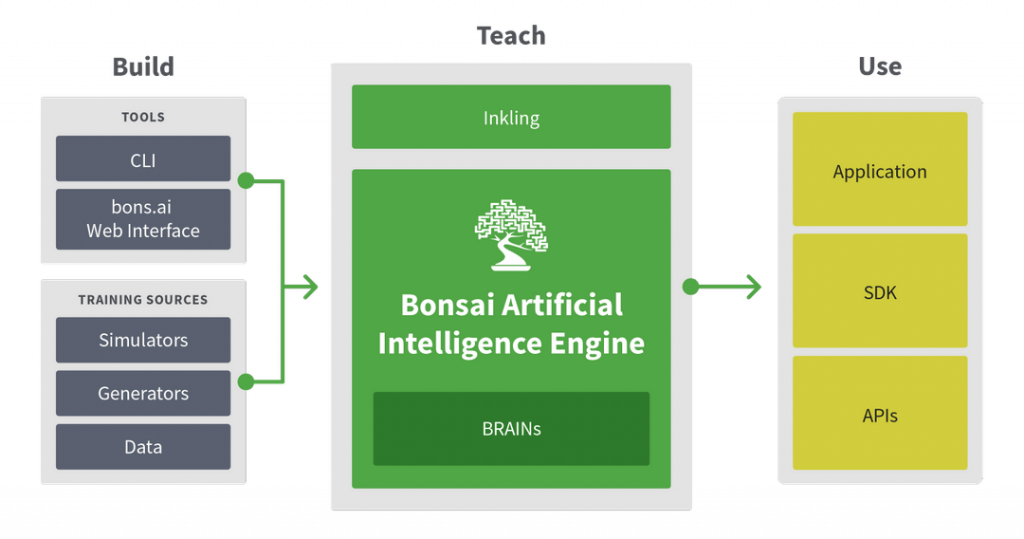 You define the concepts to be learned, the curricula for that learning, whether the learning is adequate or appropriate and how to best improve the learning. You can always go back and fine-tune the learning.

Each Inkling program is fed into the Bonsai Artificial Intelligence Engine in order to generate and train appropriate models, referred to as BRAINs. The AI Engine abstracts away and automates the low-level mechanics of artificial intelligence. EMA analyst Torsten Volk called it “Microservices for AI/ML,” where developers deconstruct the problem into components and then provide the Bonsai engine with text and visual data from which it can learn.

“This language lets you switch your thinking from all this low-level stuff to the business problem you’re trying to solve because you can take your domain and subject-matter expertise and teach it to the computer,” Hammond said.

You use using Inkling code to build the intelligence model, but you use that model the same way you would a database, connecting to it using Java or C++ or whatever language you use. Using the SDK, you would connect to the intelligence system server, then treat it like it’s a streaming data analytics system used in your application.

It can run in your datacenter, in the cloud, or it might run as an embedded process in a drone or other piece of robotics.

Bonsai.ai was founded in 2014 by Hammond — whose background is in neural networks and computing — and serial entrepreneur Keen Browne, whose previous startups include video game platform ECitySky Limited in China and job site Employ Insight with Hammond previously. The company, now with 25 employees, has raised $6 million.

The company, which won the Startup Showcase at the Strata + Hadoop World last March, launched a private beta program at the O’Reilly AI Conference in September. It also has been working with early design partners including NVIDIA and Siemens Technology to Business (TTB) to develop, test, and tune the platform. With Siemens, it has been working on industrial automation and robotics.

For now, it’s focused on control and optimization use cases, such as with the licorice machine.

“The sheer, vast array of problems where people are trying to add intelligence is fascinating,” Hammond said of the beta program. “It really underscores that APIs are wonderful for the 100 or 200-plus most common things people are trying to do, but when you look at real businesses trying to solve real problems, there’s this gigantic long tail. They need a general-purpose approach and platform to be able to solve those problems.”