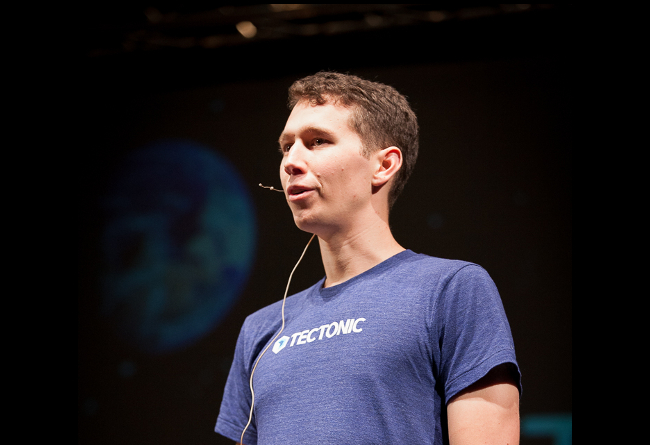 Gone are the days when open source was merely a hobby project for people working from their basement in their free time.

“The face of open source is evolving. Enterprises are investing in open source tools because they see their value, and want to take part in the community development of the hardest problems in infrastructure,” said Brandon Philips, chief technology officer and co-founder of open source enterprise software company CoreOS.

Though Philips rocks a youthful demeanor, don’t be fooled into thinking he is a novice in the open source space. In many ways, Philips’ own path, in fact, runs in parallel with the rise of open source itself.

As a computer science undergrad at Oregon State University (OSU), Philips co-founded and ran the local chapter of the Linux Users’ Group along with fellow students Alex Polvi and Michael Marineau. The trio also worked together at the OSU Open Source Lab where they shipped the first million downloads of Mozilla, hosted kernel.org for a time, and got their hands-on education in systems software.

While Philips was still at OSU, he interned at NASA and IBM. Then he worked at SUSE (Novell) Labs, as a Linux kernel developer. After that, he worked at Rackspace on the Cloud Monitoring product before eventually co-founding CoreOS with Polvi in 2013.

Philips is on the  bootstrap steering committee for Kubernetes, helping guide the project with other stakeholders. He also chairs the Technical Oversight Board of the Open Container Initiative, which is establishing standards for the container ecosystem.

It can be argued that CoreOS started the movement to create lightweight Linux based distributions for containerized workloads.

Philips and Polvi originally created a lightweight Linux-based operating system capable of automatically delivering the latest Linux kernel features and security updates across a distributed system, along with many of the other tools required to support a full stack based on software containers. They also realized early on that containers were the best vehicles to receive the latest updates for security, performance, and wide platform support.

Red Hat, Canonical and SUSE followed the suite to build their own competitors of the resulting operating system, now called Container Linux.

“The community grew with us, with the development of other major projects like Docker and Kubernetes. Open source software is the key to making this proliferation an asset, by collaborating across a diverse environment on the hardest operational problems, such as maintaining security, reliability, and portability,” said Philips. The etcd software, for instance, has gotten input from 400 outside contributors.

Philips maintains that no project can be evaluated by the number of contributors alone. “The number of contributors is not always the unit of measuring success — open source success is recognizable by a number of key results. Other factors we consider include how a project extends a diverse community contribution, creates a sustainability plan and sets governance framework for the project, establishes wide use/acceptance, and if there are meaningful external contributions help sustain project health,” he said.

Philips first came across open source software when he was working on a school robotics team. At that time he was most familiar with Windows kernel development and application development. Due to some latency issues with Windows at the time, the team evaluated and did an initial port of our robotics software to Linux (though the final project used Windows).

“Later, when I was studying at OSU, I started using Linux more seriously and got deeply involved in a number of open source projects and communities,” said Philips “And I’ve been an ardent advocate for open source development ever since. The more I took part in the community, the more I realized how open source software is a major driving force.”

In addition to the key projects mentioned above, Philips is also involved in with Luvit, a project that is bringing Node.js style asynchronous I/O programming to Lua programmers by bringing together luajit and libevent.

He was also behind CoreOS’ rkt project to build an alternative secure container runtime. CoreOS later donated the software to the Cloud Native Computing Foundation. He is involved with dex, standards-based identity provider and authentication solution, and Clair, an open source container analyzer that performs static analyses of container images and correlates their contents with public vulnerability databases.

Philips maintains that the open source model benefits most when it starts from upstream software, which the company delivers to customers as enterprise products. CoreOS always works upstream, meaning it works with the project’s developers to ensure requested features are added to the core codebase.

“When the upstream project releases its next update, the cycle begins anew. This model is beneficial to everyone involved: the enterprises get the features they need, and those features are then also made available to the community at large, thus creating a virtuous cycle,” said Philips.

He said that creating a business around open source allows them to reinvest into these projects to an increasing degree.

“We both saw an opportunity to bridge the gap between the community and enterprises running on Kubernetes; the entrepreneurial spirit is something we both have and I have enjoyed all of the challenges of developing the technology, creating the teams, and building the business,” said Philips.

Philips certainly belongs to the breed of open source innovators who have realized the value of building bridges between the community and the commercial world.

Swapnil is a journalist and writer who has been covering Linux & Open Source for 10 years. He is also a science fiction writer whose stories have been broadcast on Indian radio and published in leading Indian magazines.
Read more from Swapnil Bhartiya
SHARE THIS STORY
RELATED STORIES
Install Dozzle, a Simple Log File Viewer for Docker Acorn, a Lightweight, Portable PaaS for Kubernetes What Is Apptainer and How Do You Install It on Ubuntu Server? .NET 7 Simplifies Route from Code to Cloud for Developers Can Observability Platforms Prevail over Legacy APM?
TNS owner Insight Partners is an investor in: Docker.
SHARE THIS STORY
RELATED STORIES
Container Security: A Troubling Tale, but Hope on the Horizon Tutorial: Deploy a Full-Stack Application to a Docker Swarm Deploy a Container Stack in Portainer from a GitHub Repository Acorn from the Eyes of a Docker Compose User Can Observability Platforms Prevail over Legacy APM?
THE NEW STACK UPDATE A newsletter digest of the week’s most important stories & analyses.
The New stack does not sell your information or share it with unaffiliated third parties. By continuing, you agree to our Terms of Use and Privacy Policy.