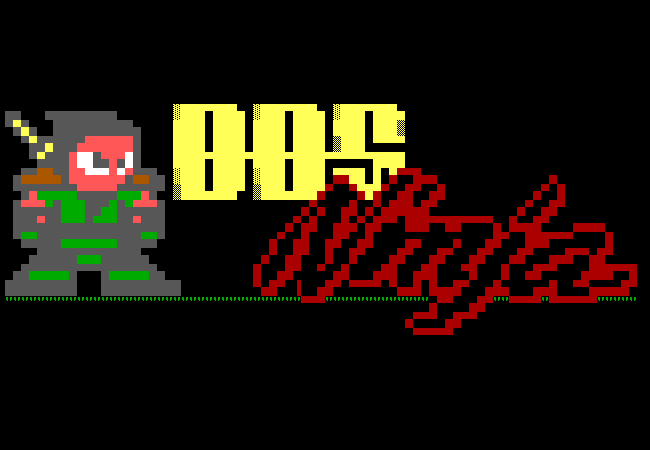 “Very few people know how the Internet became social,” argues a nostalgic article in IEEE Spectrum, written by Kevin Driscoll, an assistant Media Studies professor at the University of Virginia.

Driscoll remembers though. He remembers those unsung amateur computer enthusiasts who “blazed trails that would later be paved over in the construction of today’s information superhighway,” through the use of bulletin board systems (BBS). His article triggered a flood of memories online from former BBS users — and at least one odyssey to find out whether any of those old systems are still around.

The BBS craze started when one Chicago computer club decided to create an archive for their newsletters that could be accessed through a modem-equipped computer, eventually creating “Ward and Randy’s Computerized Bulletin Board System,” or CBBS. “In the hobbyist tradition of sharing information, Christensen and Suess wrote up a report about their project titled ‘Hobbyist Computerized Bulletin Board,’ which appeared in the November 1978 issue of the influential computer magazine Byte… Over the next few years, hundreds of small-scale systems like CBBS popped up around the country.”

Beyond the pioneers of networking technology, Driscoll argues, history should also remember that assortment of curious teenagers, gregarious geeks, and other random experimentalists who hooked their personal computers up to a phone line, waiting for connections from other PC owners who wanted to access their bulletin board software. Most callers were local — back then, phone companies charged more for calls outside their area code, and “Many BBS administrators, or ‘sysops,’ reinforced this sense of community by hosting regular in-person get-togethers, often at local parks or favorite watering holes.”

It’s a fascinating glimpse at a time when social media really was social, with meetups in real life. “Online disagreements — flame wars — could be kept in check as well, because the cost of being a jerk escalated with the likelihood of later seeing your interlocutor face to face.”

Driscoll gives a shout-out to Tom Jennings, who wrote a BBS-hosting program called Fido, and added a high-impact feature which let BBSes talk go each other. (Eventually; the messages lingered undelivered on the sysops hard drive for hours, often until after midnight when the rates for phone calls were cheaper). A series of Fido nodes popped up around the world, connecting together into Fidonet.

“Within a decade, FidoNet grew into a massive 20,000-node network reaching users as far away as South Africa and New Zealand,” Driscoll wrote. Years before the internet exploded in popularity, “FidoNet allowed BBS users to imagine themselves contributing to a vast conversation with people from all over the world.”

Forums were added — called Echoes — a variety of topics. In fact, several of the Internet Usenet newsgroups (themselves a pre-Facebook form of social media) out on the wilds of the internet began their life as online copies of traffic from Echoes. In 1986 some brave souls had started connecting their local BBS to “the nascent internet,” making it just another node on FidoNet — and one thing led to another…

The article remembers some great moments in BBS history. “Following the dissolution of the Soviet Union in 1991, a FidoNet user based in the United States circulated technical information about reading and writing Cyrillic messages and encouraged fellow FidoNet enthusiasts to reach out to the ‘overwhelming’ number of Russian users joining the network.”

The high-water mark was probably 1993, when one FidoNet advocate estimate the message-delivering network had 59 percent of its nodes — once estimated at 35,000 — in North America, 30 percent in Europe, 4 percent in Australia and New Zealand, and the rest in Africa, Asia, and Latin America. In fact, Sister Mary Elizabeth Clark ran a BBS out of her California home to share vital information AIDS with the rest of the world, remembers one of the article’s commenter. “Each day, Clark searched medical databases for the latest research about treatment and prevention and then used FidoNet to circulate this information to BBSs in more than 40 countries throughout North America, Europe, and Africa.”

It’s a fond reminder of a time when the tiny internet community existed in a world with an equally attractive alternative. “The internet at that point held no particular appeal for most BBS users, who were already enmeshed in their own lively online worlds,” wrote Driscoll. Because BBSes weren’t limited to academics or corporate technology sites, “they could be wacky and weird — independent free agents in cyberspace. Indeed, it may be more accurate to say that gateways exposed the relatively staid internet to the wild ways of BBSers.”

The article includes a couple of photos of the faces behind the BBSes — two sysops who kept the phone lines humming. And it points readers to BBS: The Documentary, an eight-episode opus (delivered on three DVDs) directed by Jason Scott. Scott has estimated that at least 106,418 BBSes operated at various times between 1978 and 2004.

How does the story end? “With the commercialization of the internet in the mid-1990s, thousands of BBSs seemed to vanish almost overnight. Some attempted to move, wholesale, to Usenet or the World Wide Web, while others simply pulled the plug and turned off the lights.” But maybe, like old soldiers, BBSes never really died; they just faded into something else. “A curious thing happened along the way to oblivion,” writes Driscoll. “Thousands of BBSs quietly metamorphosed into Internet Service Providers, or ISPs.”

His article seems to have struck a chord. After describing BBSes as “systems often running on little more than solder, duct tape, and a dream,” his comments began filling up with fond memories. “I ran 2 incarnations of BBS’s off of a Commodore Amiga 2000 in Reading PA between 1984 and 1994…” remembered one comment. “I have such awesome memories of those days.”

“I always tell everyone I was on social media before it was a thing,” added another.

“Those were such great days, or should I say long nights.”

And soon, they even began sharing their favorite BBS resources. One commenter pointed readers to two online archives of ANSI art — sixteencolors.net and BBS.ninja. A user named Rick Robinson chimed in, “Don’t forget the magazine I edited that covered the BBS world from 1989-1996!

And a commenter named “nolageek” ultimately added, “if you found this nostalgic or interesting — please call some of the few hundred boards that are up and running to this day” — sharing an online directory at telnetbbsguide.com.

That seems to have inspired a follow-up article in the Atlantic, where Benj Edwards does just that. Edwards accepted the challenge, and went on his own personal quest to re-visit today that “Lost Civilization of Dial-Up Bulletin Board Systems.” His motivation was personal — as a teenager, he’d been part of those glory days, and remembered how his 15-year-old brother visited fancifully-named systems like “Octopus’s Garden” and “Southern Pride.”

“I followed in his footsteps the next summer, spending hundreds of glorious hours online,” and eventually, he’d started his own BBS. “My best friend is someone I first met when he called my BBS in 1993.”

He writes poetically that BBSes were “like remote Pacific islands, each populated with pocket civilizations that communicate reluctantly via message-in-a-bottle.”

He began visiting the 337 BBSes listed on telnetBBSguide.com, and discovered at least 20 of them are still dial-up systems — a “small handful” of which have been running since the 1990s. “These are the true dinosaurs walking among us,” he writes — right before plugging a phone cord into the an old MS-DOS laptop with a built-in phone modem to see what’s on the other side.

First he discovers “The Keep BBS,” in Beaverton, Oregon — supposedly running “in various forms” for the last 33 years. “I encountered ample advice on how to avoid Y2K problems, browsed through a huge directory of games for the unpopular IBM OS/2 operating system, and read some messages left behind by users from 1997.”

He also visits Capitol City Online BBS in Frankfort, Kentucky — started by a 17-year-old in 1990, and running continuously ever since. It runs on an old IBM OS/2 machine (with a Pentium 1 chip). And by day, sysop Mike Powell is a COBOL programmer. He has one regular caller — a 50-something who downloads his FidoNet messages, then reads and replies to them all using an offline message reader — another reminder of that lost era when bandwidth was severely limited.

“A lot of people will leave a message and say, ‘Thanks for having the board up. I was able to hook up my old VIC-20 and test it out.’ So there are people who have a nostalgia thing going where they’re trying to test out their old computers. Or they haven’t seen a BBS in forever, and they’re shocked to find one.”

So there Edwards is, back in BBS-land. “I read several FidoNet echoes (a term for groups of messages by subject), many of which were not very active. I also perused an impressive library of classic files and even tried a few online door games, which provide exploration and adventure rendered in nothing but ASCII characters.

Then Edwards emailed six more sysops, and they all cited nostalgia as one of their motivators. Many also said that they wanted to preserve a piece of history. And “One of them hadn’t run a BBS at all back in the technology’s heyday; he just wanted to see what he had missed.” He writes wistfully that unfortunately, these poor late-comers “missed out on the elemental intimacy of the BBS.

“It was messy, it was personal, and it was profound.”

One commenter pointed out Taiwan’s PTT BBS, “which is STILL ALIVE since 1995. Every college student uses it here… Hundreds of thousands of posts are MADE DAILY, half a million comments MADE DAILY, over 20,000 boards, 1.5 million users, covering every aspect of life in Taiwan.:

And one poster even discovered the original BBS of the article’s author — which is now connected to the internet.

And just for the record, FidoNet is still there too, listed as having 2,500 nodes, Edwards article reports, though the number of active nodes now may be closer to 50. And yes, Edwards did pay a visit on one of them, a BBS called the Brazos Valley Hub, which he describes as a “Texas ghost town” that apparently exists solely to pass along FidoNet traffic. Its 77-year-old sysop returned Edwards’ phone call, then “spent most of our hour-long conversation talking about things like Area 51 and the Mafia.” He ran the system to provide a means of communication that he believed wouldn’t be monitored by the government — one last bastion of privacy.

“Eventually, Luther expressed grave concern for my safety given his complex life full of dangerous connections, so we exchanged polite goodbyes.”