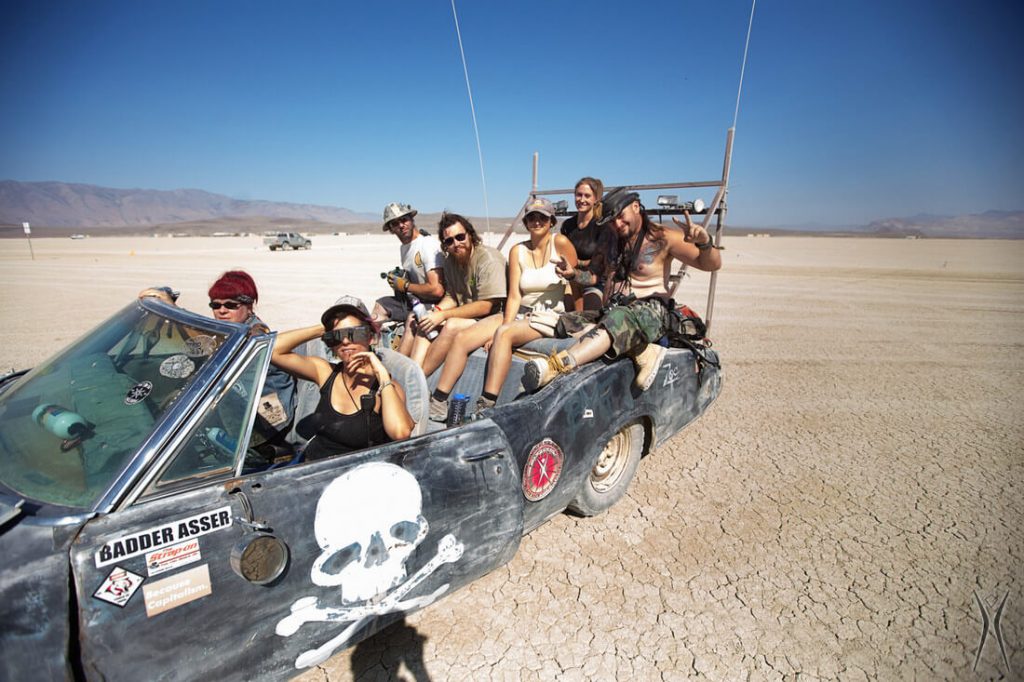 The 30th annual Burning Man festival officially ended Monday — and now attendees face the mental labor of making sense of all of the magic and madness that went down in their gathering in the desert. The week before Labor Day may be filled with strange and unexpected experiences, but the week that follows is traditionally dedicated to collecting up all of those strange memories. That is, after the 70,000 attendees finally make their way back to civilization.

As usual, there’s no shortage of cool videos around the web — capturing all the fire and the fireworks, smiling faces in the desert sunset, the sculptures and the crowds, often set to a funky techno beat.

A burner named Dexx Negron uploaded a special video to Facebook that offered an intimate look at some camps through the eyes of a drone. The footage opens as the drone hovers inside, as though the camera was achieving sentience before venturing out to explore its surroundings. One San Francisco film-maker condensed their footage into a trippy three-minute “hyperlapse” video. And there’s even a video showing someone who’s playing a burning tuba.

Technology has always found a home at Burning Man, but it’s now attracting some heavy hardware — specifically, helicopters and drones. Business Insider assembled a collection of “Eight aerial photos that show the madness of Burning Man from above.” Their series opens with a stunning photo of a nearly-naked man leaping from thousands of feet in the sky — a particularly adventurous burner who decided to parachute into the camp — and there’s also some thought-provoking aerial shots of the clustered cars and camper trailers. The series ends with a reminder that last year’s festival was reportedly even photographed from outer space by the International Space Station.

Though Mashable drew an entirely different message from an aerial photo taken as the festival was ending. Reno authorities searching for a missing 17-year-old prompted the organizers to close the exit gates — resulting in a massive traffic jam that lasted for hours.

Mashable called the image “the one photo that will make you want to avoid Burning Man,” citing a Twitter account for traffic updates from the festival which “described the gridlock as ‘extreme’ and at one point reported the wait time out of Burning Man’s gates as nine hours.”

Due to delays caused by the search for a missing minor, the present time on Gate Road is estimated at 9 hours.

But that’s not the only way that technology — and the law enforcement community — has made their presence felt. For at least five years, the FBI field-tested their new surveillance equipment at Burning Man, with the help of the local sheriff’s department. That’s according to documents obtained through a Freedom of Information Act request by MuckRock.com. Parts of the document were redacted, leaving the site to speculate about how the agency fared with its mysterious maneuverings. “I’d be curious to see how the FBI’s cell-phone tracking technology would fare up against Black Rock City’s notoriously bad cellular reception.”

It’s a reminder that as the festival grows, it continues to confront its own massive logistical challenges. The official Burning Man site describes the gathering as “A city in the desert. A culture of possibility. A network of dreamers and doers.” So like any city, Burning Man has created their own DMV — which in this case stands for Department of Mutant Vehicles. It requires the machines that roll through the city’s roadways “to be completely mutated — showing little or none of the original base vehicle” — before they’ll receive one of the coveted licenses granted for the event.

This year’s creations were lovingly documented by photographer Scott London, including the spectacular Anglerfish created by northern California artist Mark Whitman, and a giant three-masted frigate built over the hull of an old camper trailer that Bay Area artist Greg Barron named “The Monaco.” And of course, there was also an enormous mechanical rhinoceros.

Esquire seemed to sum up their perspective of the event with an article promising “Everything You Need to Know About Burning Man in 20 Photos (NSFW): Fire, nudity, and bikes in the desert.” But there was no shortage of truly creative art projects. The Equis Collective built something called the Automata Equis, which they described as “a small herd of unearthly horses, languidly traversing no distance across an immense playa. They howl with the wind, a lament of the freedom they lack to dance across the dust, still they carry their passengers forward into a reveling dusk.” Their full-sized animatronic horses were designed to make noises as the wind blew across a pipe of reeds, “lit from within glowing at night and casting eerie shadows out into their environment.”

Art projects come in all shapes and sizes, and at the end of the event, festival-goers burn more than just a giant wooden Man. There’s also been an elaborate Temple for each of the last 15 years — this year’s filled 2,500 square feet, featuring “a large altar, plenty of sitting room, and a huge chandelier that hung from its ceiling.”

Matt Mihály, CEO of the Iron Realms Entertainment, assembled video footage from the Temple and its burning into a tribute to David Bowie. “I think there’s no question he would have loved its combination of outrageous style and music,” Mihaly writes on YouTube (using his pseudonym, “Dr. Yes.”) And Wednesday, after the festival was over, he shared one more piece of news.

“Some of David Bowie’s ashes were in the Temple at Burning Man this year. Reportedly, his daughter Lexi brought them…”

Even celebrities got in on the act. Time magazine reported that the event was graced with the presence of Paris Hilton, as well as Katy Perry, and models Karlie Kloss and Heidi Klum. Back in California, Conan O’Brien’s sidekick, Andy Richter wondered if the whole event was staged just to make him feel left out.

It can be hard to re-adjust to normal life after returning from the festival. Or, as the New York Post put it, “New Yorkers back from Burning Man won’t stop whining.”

“You’re trying desperately to hold onto the good energy [of] Burning Man, but it is so hard to do that amid the bustle of NYC,” one burner tells the New York Post, remembering how a fellow burner cut in front of her in the cab line at the airport, and snarled “We’re not at Burning Man anymore.”

There’s already official “decompression” events planned in San Francisco on October 9th, as well as an “Autumnal Gathering” on November 19th — with more events being planned by burners around the country. But every once in a while, there’s a festival-goer who simply refuses to return to their boring old normal lives. On Salon, writer Liza Monroy shared a poignant story called “He went to Burning Man and never came back,” about how a visit to the festival became a stepping stone for her friend Andy’s perpetual pursuit of more magical moments. “I watched as his life became performance art, a spectacle of glitter, cartwheels and ’embracing your awesome’… He wore a furry vest with nothing underneath in the middle of Times Square. He helped the homeless in Reno in a pirate costume…”

It’s hard to measure exactly how the festival affects the people who attend it. But in the end, Burning Man 2016 was like any other — producing some stunning photos of the Nevada desert and lovingly-crafted art installations, along with some inspiring videos, and a few stories about what went wrong — and what went gloriously right. In fact, some of the festival-goers seem to apply the same creativity to their documentary videos as they did to the event itself.

And for the week that follows, the internet becomes a giant scrapbook, proving that maybe Burning Man really is a story that’s best told with pictures.