Burning Man Returns with a Quest for Sustainability, Meaning

After a three-year hiatus, Burning Man seems to be searching in the desert for a little extra meaning.
Sep 4th, 2022 5:08am by David Cassel 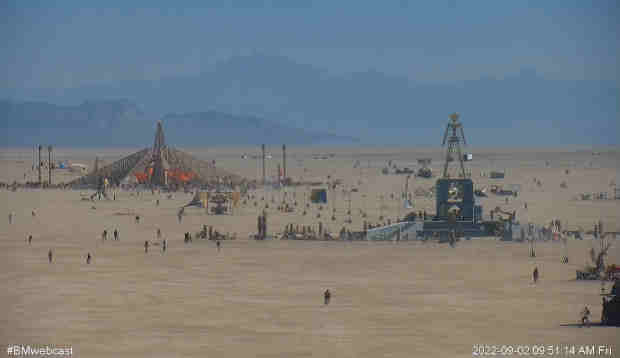 This week Burning Man returned to its traditional home on a dusty playa in Nevada. For the first time since 2019, crowds arrived again to build their art installations and theme camps, to make music and mingle — and to communally create one of the wildest cities in Nevada.

YouTube videos provide some precious glimpses from the festival. There’s the usual throng of tents, cars, and trailers, with crowds at concerts and trippy, fire-based sculptures. Archived footage from the event’s webcam shows the expected crowds, and this year’s official schedule highlighted the return of its two long-standing traditional events.

On Saturday night, the namesake Man was burned, and today will be the lighting of the Empyrean Temple, a spectacular structure representing “the region just beyond our physical realm … the highest point where one can interact with their own highest concept of the divine,” according to its creators.

But after a three-year hiatus, the tech-friendly event seems to be searching in the desert for a little extra meaning.

In 1986, San Francisco artist Larry Harvey made a 9-foot tall wooden sculpture of a man to burn on Baker Beach, and invited a few friends to witness the blaze for Summer Solstice. The event was such a success it became an annual thing, attracting more people each year and moving out to a playa near Gerlach, Nevada. People camp in front of the Man (which has grown in size each year), forming an entire city.

Each year, a theme is chosen for the event.  Last October the theme for 2022 was chosen: waking dreams. An official announcement urged participants to “explore the transformative power of dreams, both literal and figurative … Because, after all, what is Black Rock City if not a collective manifestation of the community’s dreams?

“After a long hazy blur of pandemic insomnia, unanchored in time and adrift between sleeping and waking, it’s time to start imagining the future again.”

That seems to include a self-conscious emphasis on sustainability. This year’s sculpture of the Man is 100% solar powered. The incredible installation “Paradisium” is an artsy artificial forest built sustainably using reclaimed wood, ropes and other materials.

“Paradisium,” a Sustainably-Built Forest under a #Starwarp starry sky and a meeting place for participatory engagement . . .

“The reason why I have taken so long to realize it, despite having conceptualized it 10 years ago, is that I wanted the work to be climate positive and climate responsible,” she said.

But even this year’s Burn itself will be powered by “the Baby Wookies and Unicorn solar units,” according to a recent announcement. It’s part of a larger push to make the event more sustainable. Last year Black Rock City organizers and Burning Man staff joined with local residents to build new infrastructure, sustainable systems and “community amenities,” with more than 2,500 people involved.

Amid plans for a 100-acre sculpture park and an art trail, there are also hopes to create a year-round warehouse/maker space near the playa called “the 360,” designed to reduce the event’s environmental impact by decreasing some of the art-installation freighting that happens every year. “Instead of having to ship theme camp containers and art cars from New York or Chicago or Vancouver, imagine being able to store them close to the playa,” wrote John Curley, a photographer, on The Burning Man Journal website.

And there are also plans to transition the entire event off of fossil fuels by 2030.

More Than a Mirage

The pandemic provided a long break for reflection. In the announcement they posted August 19 on The Burning Man Journal, the event’s organizers said they’ve emerged with a new vision of bringing economic growth to the local residents of Nevada.

“Every year, our dusty city rises in the midst of a region whose year-round residents live with extremely limited access to employment and education, unreliable utilities such as power and internet, and next to no services and amenities such as grocery stores, hospitals, and childcare.”

So their new hope is to create not just jobs but also infrastructure and services in the towns of Gerlach and Empire and the communities around them. And, in true Burning Man style, there’s a radical and ambitious hope to extend it far beyond the playa: “The model we set in motion can ultimately serve other towns and regions across the US that similarly lack economic opportunities and basic amenities.”

Matthew “Chef” Kwatinetz, Burning Man’s senior director of Nevada operations, sees it as a question of identity. “If we are to be something more than ephemeral, something more than a mirage rising in the desert once a year, we must leave a positive trace,” said Kwatinetz in the online announcement.

“When people ask us who we are, and where they can find us, they must be able to go to a place and see our influence the other 51 weeks of the year. That place most naturally is Gerlach.”

There are also plans to create joint programs with local universities to offer accredited courses. (Although one commenter posted skeptically that “It’ll be like living in TedX lectures – 24/7, all the time, forever and ever.”)

But the announcement ambitiously described the organizers’ ultimate vision as “building a new economy, a new community, a new rural way of being in the world. Our efforts are to stave off gentrification while simultaneously supporting culturally rich spaces that offer new, regenerative ways for people of all walks of life to thrive. And no, it’s not too much to ask.”

Still, there’s the Burning Man organization, and then there’s the celebratory festival itself, with an endless variety of one-of-a-kind experiences shared by thousands of attendees. This year’s event received permits for up to 80,000 people — and it will inevitably mean different things to different people.

“When we get back to Black Rock City in 2022, three years will have passed,” predicted last October’s announcement for this weekend’s event. “That’s more than a thousand days and nights of pent-up hopes and desires, all coiled up in our psyches and ready to burst out onto the blank canvas of the Black Rock Desert.

“Whether it’s a dream of artistic expression, a yearning to connect with others in a fractured society, or simply a desire to live a more meaningful and authentic life, Burning Man is the place where dreams can and do come true.”

SHARE THIS STORY
RELATED STORIES
Why 'Explainable AI' Can Benefit Business 2022 in Review: AI, IT Armies, and Poems about Food Snack Stack: Turning Winter Comfort Food up to 11 How Not to Waste a Senior Hire Donald Knuth's 2022 'Christmas Tree' Lecture Is about Trees
SHARE THIS STORY
RELATED STORIES
How Will Tech Jobs Change in 2023? Snack Stack: Turning Winter Comfort Food up to 11 Entrepreneurship for Engineers: Building for Customers’ Love It Happened to Me: How I Suddenly Owed AWS $13,000... AI Image Generation Models and the Ethics of 'Data Laundering'
THE NEW STACK UPDATE A newsletter digest of the week’s most important stories & analyses.
The New stack does not sell your information or share it with unaffiliated third parties. By continuing, you agree to our Terms of Use and Privacy Policy.