The programming languages and platforms of tomorrow — when code for machine learning and artificial intelligence code become as common as writing JavaScript — are beginning to emerge.
Nov 20th, 2018 2:13pm by B. Cameron Gain 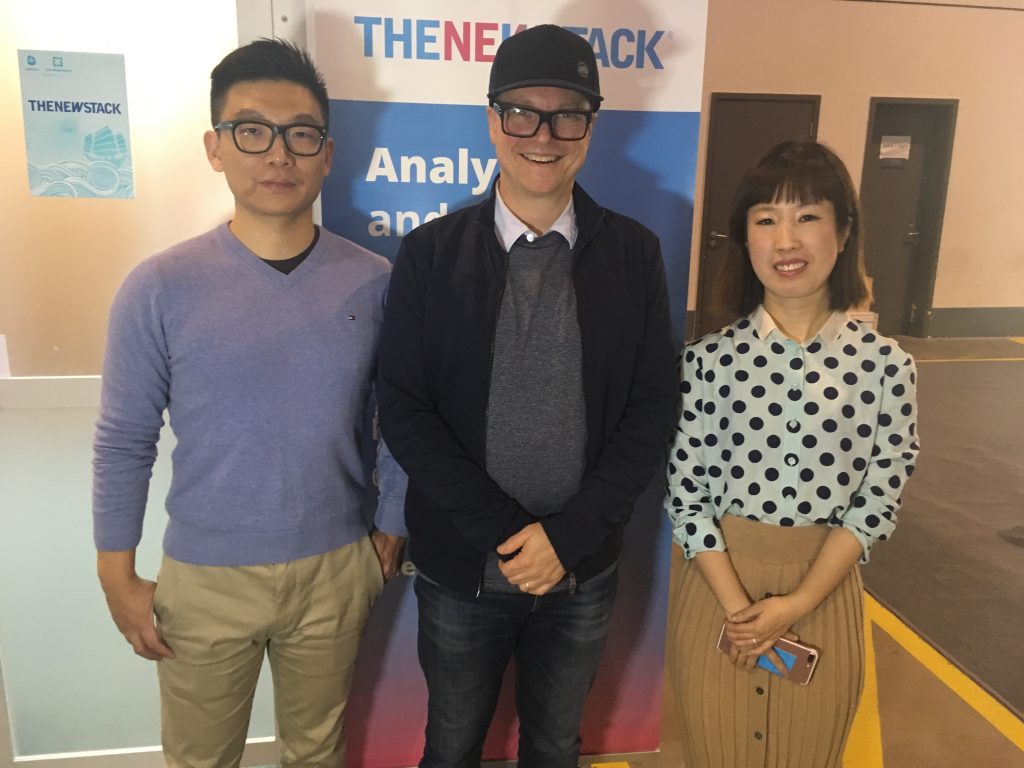 Caicloud COO And CEO On The New Age Of AI Programming

The programming languages and platforms of tomorrow — when code for machine learning and artificial intelligence code become as common as writing JavaScript — are beginning to emerge. They should also be Kubernetes- and cloud-native-centric, co-founder and COO Jiayao (Julia) Han and CEO Xin Zhang of Caicloud said, during a podcast Alex Williams, founder and editor-in-chief of The New Stack, hosted during KubeCon + CloudNativeCon 2018 in Shanghai.

While based in China, Caicloud also has very American origins. It was founded, for example, by several Googler engineers and developers and Carnegie Mellon University alumni. Its main mission: to create an operating system for the AI age,

“Our goal is to build an operating system It is definitely different than what Apple or Microsoft offers. We are not competing with them, but are building an OS in the AI age,” Zhang said. “We had Windows and Mac OS’ in the PC age and Android and iOS for the mobile age, but now, I can see every business is becoming data-driven, and machine learning and artificial intelligence are really surging,” Zhang said. “But we really need to have an operating system to empower every organization to utilize its data to make sense of its data more efficiently. That is the operating system we are building.”

Besides being much different than applications created with Ruby, Java and other workhorse languages; AI applications, besides requiring new types of languages and operating systems, will also be built to scale massively, rely heavily on parallelism and will be data- and native cloud-centric, Zhang said. “Today’s software is basically two-dimensional in complexity — you design the algorithm and implement it, but data-driven software is really four-dimensional,” Zhang said. “The complexity and workloads [of software it for AI] are much different. We are building an OS geared for these new types of workloads to make it more distributed and with more parallelism and also to change the workflow to keep data in mind.”

Kubernetes and Kubeflow should also play a big role in AI and machine learning software — all built for multicloud, Han said.

“[In China], we have seen a huge shift since last year towards private cloud in multicloud environments and an acceptance of [multicloud and cloud native computing.],” Han said. “I think the trend we will also see is continued diversity on native cloud infrastructure in China.”

As mentioned above, the applications should run on Kubernetes “because cloud native is designed to accelerate the software development cycle and also leverages parallel computing to speed up development,” Zhang said.

Beside using machine learning languages for AI such as Tensorflow, Zhang said his team uses “Kubernetes to accelerate the AI workflow and development cycle.”

“This makes it much easier to go to production,” Zhang said.

AI and machine learning will also require new hardware, such as GPUs; data storage systems and other new infrastructure, Zhang said. “When we talk about AI, people tend to only focus on the algorithmic part and what neural network to use,” Zhang said.

1:36: What is Caicloud?
4:55: Are you going to talk about this operating system in the context of Kubernetes? What is that bridge?
11:13: How are you monitoring that environment?
13:16: How do you believe that this is going to impact other industries?
17:48: The technology architecture behind the Caicloud OS
22:43: What impact will China’s development in Kubernetes have on the rest of the world?

KubeCon + CloudNativeCon 2018 paid for the travel of podcasting crew to attend this event.