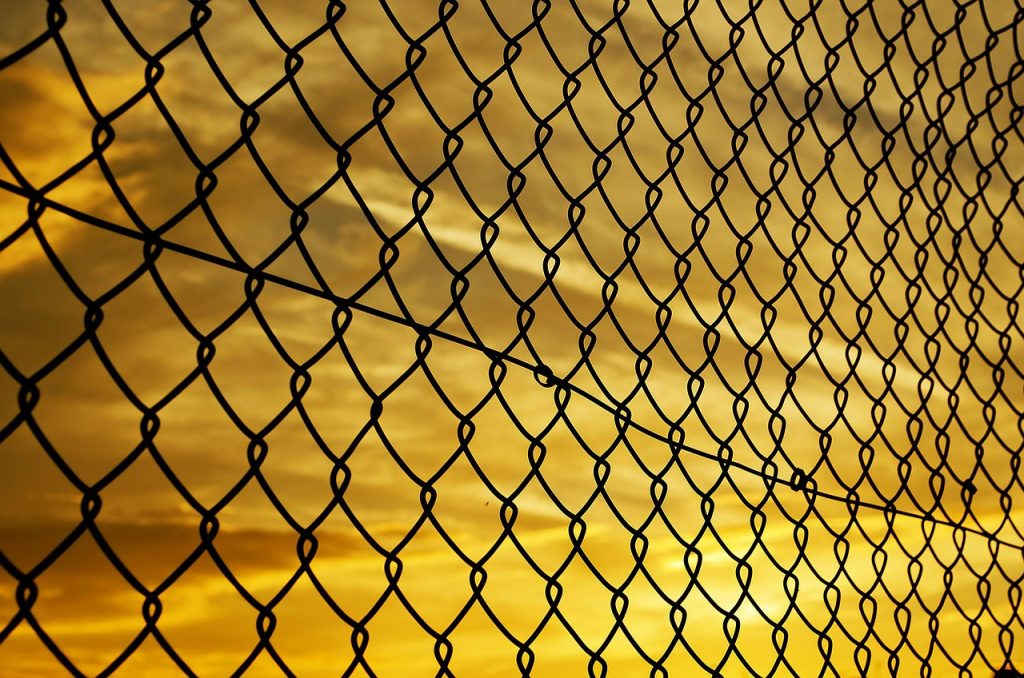 Peter Kelly
Peter is director of engineering at Tigera and site leader for Tigera's EMEA office in Cork, Ireland, where he and his team work on encryption and application security. Peter has two decades of experience in software development, including recently building control plane technology for open source proxies.

Last June, Tigera announced a first for Kubernetes: supporting open source WireGuard for encrypting data in transit within your cluster. We never like to sit still, so we have been working hard on some exciting new features for this technology, the first of which is support for WireGuard on Azure Kubernetes Service (AKS) using the Azure Container Networking Interface (CNI).

First, here’s a short recap about what WireGuard is and how we use it in Calico.

WireGuard is a VPN technology available in the Linux kernel since version 5.6 and is positioned as an alternative to IPsec and OpenVPN. It aims to be faster, simpler, leaner and more useful. To this end, WireGuard takes an opinionated stance on the configurability of supported ciphers and algorithms to reduce the attack surface and auditability of the technology. It is simple to configure with standard Linux networking commands, and it is only approximately 4,000 lines of code, making it easy to read, understand and audit.

While WireGuard is a VPN technology and is typically thought of as client/server, it can be configured and used equally effectively in a peer-to-peer mesh architecture, which is how we designed our solution at Tigera to work in Kubernetes. Using Calico, all nodes with WireGuard enabled will peer with each other, forming an encrypted mesh. We even support traffic still flowing with a cluster that has WireGuard on some nodes and not on others. 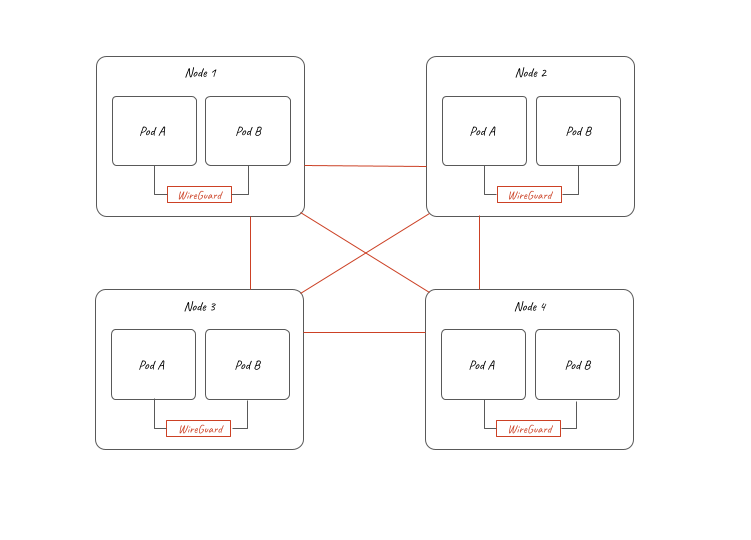 Our goal with leveraging WireGuard was not to compromise. We wanted to offer the simplest, most secure and fastest way to encrypt data in transit in a Kubernetes cluster without needing mTLS, IPsec or complicated configuration requirements. In fact, you can think of WireGuard as just another overlay with the added benefit of encryption.

The user simply enables WireGuard with one command, and Calico looks after everything else, including:

You just specify the intent; the cluster does everything else.

The diagram below shows the various packet flow scenarios in a cluster with WireGuard enabled. 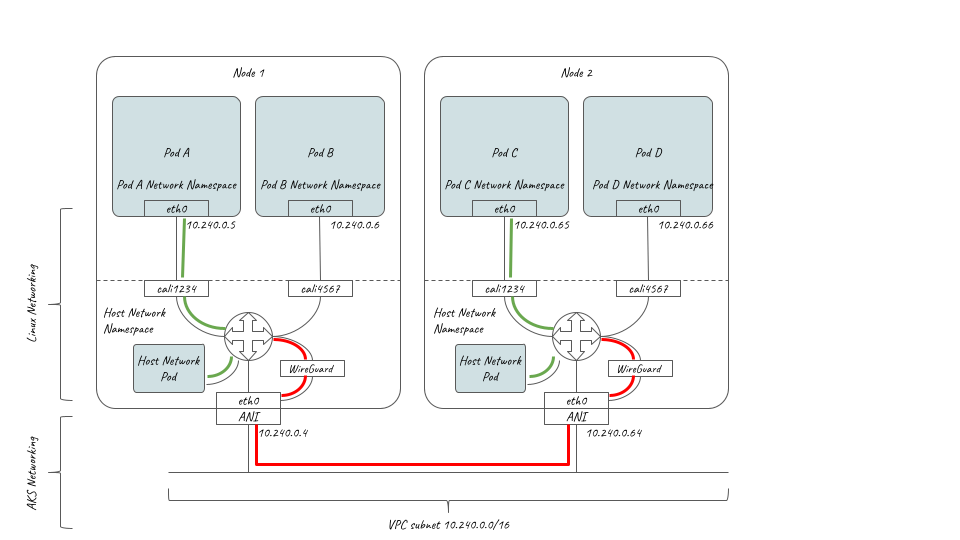 Pods on the same host:

In the following animation, you can see 3 flows:

AKS with the Azure CNI presents some really interesting challenges for WireGuard support.

First of all, using the Azure CNI means IP addresses for pods are not allocated using Calico IP address management (IPAM) and classless inter-domain routing (CIDR) blocks. Instead, they are allocated from the underlying VNet in the same way as node IPs. This proves an interesting challenge for WireGuard routing, where before we could add a CIDR block to the AllowedIPs list in the WireGuard configuration. In contrast, we now have to write out a list of all pod IPs for that node. This requires Calico to have a configuration setting for routeSource set to workloadIPs. If you are using our operator to deploy to AKS, this is already handled for you.

Tigera provides an active Cloud-Native Application Protection Platform (CNAPP) with full-stack observability for containers and Kubernetes that prevents, detects, troubleshoots, and automatically mitigates exposure risks of security issues in build, deploy, and runtime stages. Tigera and TNS are under common control.
Read the latest from Tigera

Using the excellent wg utility from wireguard-tools, here you can see a list of allowed IPs for each peer that would include the set of pod IPs for each peer as well as the host IP (note the endpoint IP is also in the allowed IP list). On AKS, this provides workload encryption and also host-to-host encryption.

The second challenge is handling the correct maximum transmission unit (MTU). Azure sets an MTU of 1500 and WireGuard sets a DF (Don’t Fragment) mark on the packets. Without adjusting the WireGuard MTU correctly, we see packet loss and low bandwidth with WireGuard enabled. We can solve this by auto-detecting AKS in Calico and setting the correct overhead and MTU for WireGuard.

We can also add the node IP itself as an allowed IP for each peer and handle host-networked pods and host-to-host communication all over WireGuard in AKS. The trick with host-to-host is to get the response to route back through the WireGuard interface when RPF (reverse-path forwarding) occurs. We can solve this by setting a mark on the packet on the destination node for incoming packets and then configuring the kernel to respect that mark for RPF in sysctl.

Now, on AKS you have full support for workload and host encryption between nodes. You just specify the intent; the cluster does everything else.

The New Stack is a wholly owned subsidiary of Insight Partners, an investor in the following companies mentioned in this article: Tigera.