CALMS Is DevOps for Cloud Engineering

DevOpsDays's Matty Stratton offers how to apply the DevOps principles of CALMS to emerging practice of cloud engineering.
Oct 19th, 2022 4:00am by Jennifer Riggins 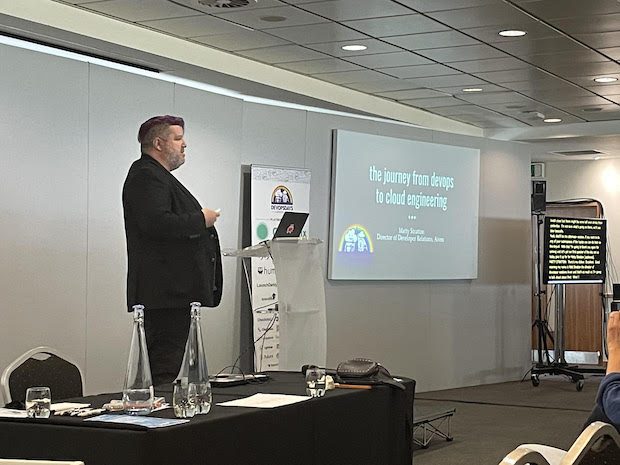 LONDON — “I like definitions. Definitions help us create common vocabularies.” That’s how Matty Stratton kicked off his DevOpsDays London keynote. The director of developer relations for Aiven pointed out, however, it took a couple years for the tech industry to settle around a definition for DevOps, which Donovan Brown nailed down as the union of people, process and products. Still, the term DevOps isn’t very inclusive of all the silos it’s breaking down, which has led to portmanteaus like DevSecOps, AIops and beyond.

In comes cloud engineering, which, Stratton contends, applies standard software engineering practices and tools across application development, infrastructure and compliance — usually just the first — pursuant to leveraging the cloud effectively. His talk offered how to combine the basics of DevOps’ CALMS — culture, automation, lean, measurement, and sharing — with the foundation of cloud engineering — build, deploy, manage — all with a cloud native mindset. Let’s dive into his breakdown now.

Keep CALMS and Carry On.

This is what CALMS stands for, and why each word in the acronym matters:

“DevOps is not just automation or Kubernetes,” Stratton emphasized. DevOps from the start was not very prescriptive which is when folks started selling magic solutions. But, he warned, “You can’t buy DevOps but I can definitely sell it to you,” with consultancies abound propagating their own secret sauce.

DevOps success all comes down to communication, which is why he advocates for combining CALMS with the emergent practice of cloud engineering to put everyone in the same direction.

So far DevOps has been most likely applied to development and operations teams — it’s in the name. But if it doesn’t factor in governance, security and finance, to mention a few important siloes, an organizational DevOps transformation can only go so far. Stratton offers cloud engineering as a way to apply those standard software engineering practices and tools across the whole software development lifecycle, folding application development, infrastructure and compliance into build, deploy and manage. 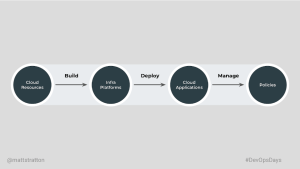 Basically, in a DevOps way of cloud engineering, Stratton explained in a follow-up conversation, “We use cloud resources to build infrastructure platforms upon which we deploy cloud applications, which we manage with policies.” So how does that new cloud native build stage work?

“The build part of cloud engineering is about creating the services and the infrastructures that provide what our customers need,” Stratton explained.  Stratton cited James Governor in pointing out how everyone is in a race to the bottom to create their own Heroku, when they aren’t in fact platform-as-a-service companies.

“A lot of orgs, we want to create things because it’s fun,” explained Stratton, with government agencies and the biggest companies “building tools that don’t exist to retain great engineers. It’s never your most important thing,” and then, he continued, “your side project doesn’t get the funding and attention.”

Now, if you apply CALMS to this build stage, it one-ups everything.

You guide culture with a focus on building differentiators, creating a common developer experience, and driving empathy. A lack of empathy, Stratton explains, comes from a lack of understanding. The build-driven automation zeros in on reusable components, leveraging ecosystems, and creating rationally crafted pipelines, avoiding bespoke implementations. Building with lean software development practices comes with a focus on increasing value, driving efficiency, and reviewing for continuous improvement.

“Deployment processes that take too long or require too many minimal steps can absolutely block us from getting new features to customers or resolving service issues,” Stratton said. This is why he argues it is essential to deploy the same way, every time. And enforce it by applying continuous delivery practices to infrastructure, too — because otherwise, he says, humans make exceptions.

“When you have an exception process, everything becomes an exception,” he continued. “It’s a common practice to apply CI/CD to application development but not infrastructure.” He continued, “when we pick these same principles with our infrastructure that means our new updated infrastructure resources meet our quality controls and help us understand that we know what changed.”

Deploying the same way every time, Stratton further explained, includes quality and security checks. Make sure infrastructure is part of the application. You should even automate checklists, he says.

“The wonderful and frustrating thing about computers is they are jerks. So when we have a process that a person has to approve, people do favors for each other sometimes,” which is why Stratton advocates for enforcing the same thing, all the time. Which makes it easier to measure everything with ample visibility.

In a deploy culture, he says, “It doesn’t count until it’s in prod.” The deploy culture embraces iterative deployment, breaking a larger application into much smaller parts , and enables continuous improvement

Just remember that the measurements will be different depending on the org. “It’s not about speed — it is the ability to move at the speed that’s appropriate for what your business needs to drive value,” Stratton said. Only then can the sharing be grounded in everyone having a clear answer to: What’s changed?

Stratton kicked off the third pillar of his CALMS cloud engineering with another pedantic exploration. DevOps is all about shifting left, but that isn’t typically explained well. “We want to shift the attention to the left, not the workload,” he reminded DevOpsDays London.

The manage side of cloud engineering comes down to creating this level of visibility across a development and deployment cycle, with a common vocabulary that connects to business objectives. At this stage, Stratton explains that security is everyone’s job, not just shifting that responsibility on new shoulders.

Cloud engineering aims to put controls and process in place to enable, enhance and automate as much as possible, especially around security and compliance, taking the blame away from the individual. “Treat policies as code and it gives security visibility no matter where they sit in an org,” Stratton said. “Security is everyone’s responsibility,” he reiterated. And security and quality are so closely linked, however, only the latter is considered early on.

Guardrails are actually very powerful culture influences, he explained, allowing everyone to be more confident in their deployment and management, increasing a common understanding across disciplines, he explained.

So how do you manage automation in a cloud native way? “Computers can’t lie,” he said. They also can’t be persuaded to approve something without the proper processes and checks in place. This way, policy goes from vague to understood across siloes, in a common, standardized, codified checklist.

Then, the manage stage of measurement brings visibility into the current, executable policy — with metrics both tech and business understand. This includes a current state of compliance, with an understanding of where policy and value collide.

Then, by embracing a shared vocabulary, enforced by policy as code, it “helps us utilize success patterns and helps us share the learning,” Stratton said.

Jennifer Riggins is a culture side of tech storyteller, journalist, writer, and event and podcast host, helping to share the stories where culture and technology collide and to translate the impact of the tech we are building. Currently in London,...
Read more from Jennifer Riggins
SHARE THIS STORY
RELATED STORIES
What Do 'Cloud Native' and 'Kubernetes' Even Mean? How Donating Open Source Code Can Advance Your Career Spotify's Backstage: A Strategic Guide Open Source Underpins a Home Furnishings Provider’s Global Ambitions Can Observability Platforms Prevail over Legacy APM?
SHARE THIS STORY
RELATED STORIES
Docker versus Kubernetes: Start Here Realizing the Dream of Cloud Native Application Portability How Paylocity Scaled Up Community in the Cloud with MongoDB Open Source Underpins a Home Furnishings Provider’s Global Ambitions .NET 7 Simplifies Route from Code to Cloud for Developers
THE NEW STACK UPDATE A newsletter digest of the week’s most important stories & analyses.
The New stack does not sell your information or share it with unaffiliated third parties. By continuing, you agree to our Terms of Use and Privacy Policy.