Can NFT Technology Expand Beyond Digital Apes and Punks?

Speculation and status is what’s driving the NFT market today. But the bubble will likely burst at some point, so what else can NFTs do?
Feb 28th, 2022 6:00am by Richard MacManus 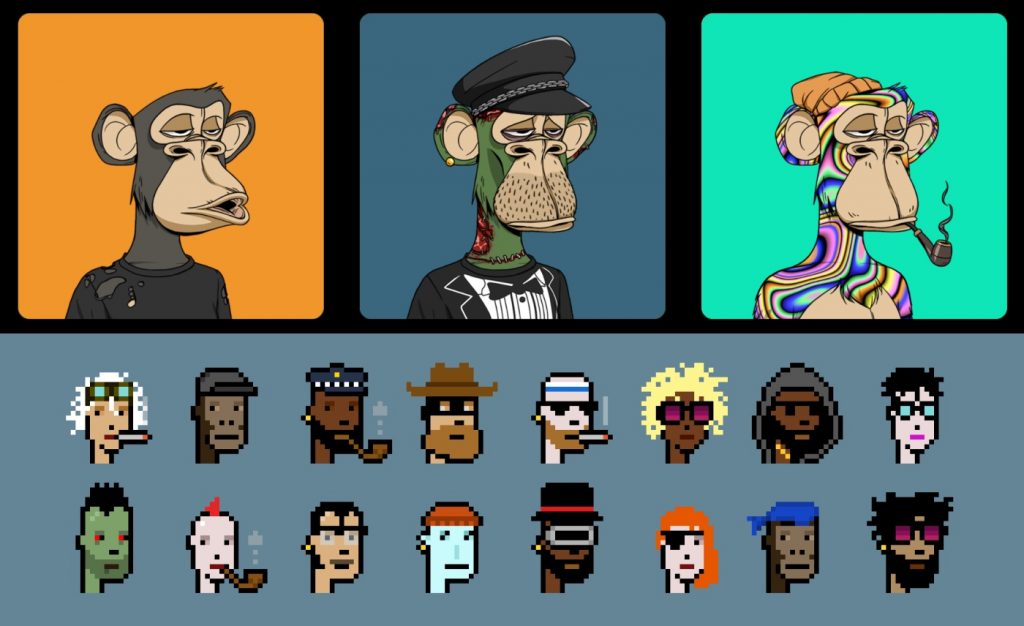 NFTs (Non-Fungible Tokens) have taken the internet world by storm over the past year or two. When we think of NFTs today, we mostly think of the digital cartoons that have saturated our social media screens — apes, punks and everything in-between. There have also been massive NFT art sales, epitomized by this era’s answer to Damien Hirst: Beeple, who famously sold an NFT art work for $69 million in March 2021.

However, there is a sense that NFT technology has only scratched the surface of its true potential. The fact that some NFTs are apparently worth millions of dollars is all part of the financial bubble around cryptocurrencies that we’re currently living through. Speculation and status are driving the NFT market today. The bubble will likely burst at some point, though, so the question is: what else can NFTs do? Do they have legitimate use cases beyond digital collectibles and art investment?

The “bored ape” on the extreme left last sold, in September 2021, for over US$2 million; source: OpenSea.

The Technology Behind NFTs

To answer these questions, we first need to understand how NFTs are built.

NFTs are largely based on a single protocol: ERC-721. It’s an Ethereum standard that was released in early 2018, based on code written by Dieter Shirley, the founder of a digital collectibles product called CryptoKitties. From about December 2017 on, CryptoKitties set the template for the NFT craze of today, with the non-fungible felines selling for up to hundreds of thousands of dollars.

The “non-fungible” part of NFTs simply means that each NFT is unique — unlike, say, a cryptocurrency like ETH, which is fungible (one ETH is exactly the same as another ETH). This “uniqueness” is only specified on a blockchain though, it is not necessarily legally binding. ERC-721 is how NFT ownership is claimed on the Ethereum blockchain, via a smart contract.

After ERC-721, ERC-1155 is the next most suitable for NFTs — but it tends to be used more for gaming applications. For example, in a game you might spend money to buy a mix of fungible and non-fungible digital assets (a magic sword, a piece of clothing, etc).

How ERC-721 Works and How Platforms Extend It

What ERC-721 does is implement an API for tokens within smart contracts, which specifies ownership for each unique NFT and allows it to be bought and sold. ERC-721 is a fairly basic protocol and has limited functionality. As the NFT marketplace OpenSea described it, “it [ERC-721] provides a mapping of unique identifiers (each of which represents a single asset) to addresses, which represent the owner of that identifier,” as well as “a permissioned way to transfer these assets, using the transferFrom method.”

The limited functionality of ERC-721 has prompted some crypto critics to note that the standard risks being marginalized by platform players, like OpenSea. Moxie Marlinspike, the founder of encrypted instant messaging service Signal, recently experimented with NFT development and pointed out that OpenSea has already begun to add proprietary features that extend ERC-721. “Protocols can’t move as quickly as platforms,” he commented on Twitter, “so opensea iterates as a platform to enable all the things missing from erc721 (royalties, bids, auctions, social features, etc).”

This, of course, is the same pattern that we saw in Web 2.0 — where open protocols like RSS were eventually pushed aside by proprietary technologies (Facebook’s news feed, Twitter’s feed, etc).

Collectibles Rule NFTs, but for How Long?

Regardless of whether OpenSea and other centralized NFT platforms eventually take control of the NFT market (if they haven’t already), NFTs seem poised for expansion. Four years ago, OpenSea described itself as a “peer-to-peer marketplace for rare digital items.” CryptoKitties and CryptoPunks (the first popular set of NFT profile images for social media) were among the leading NFT collections at that time. 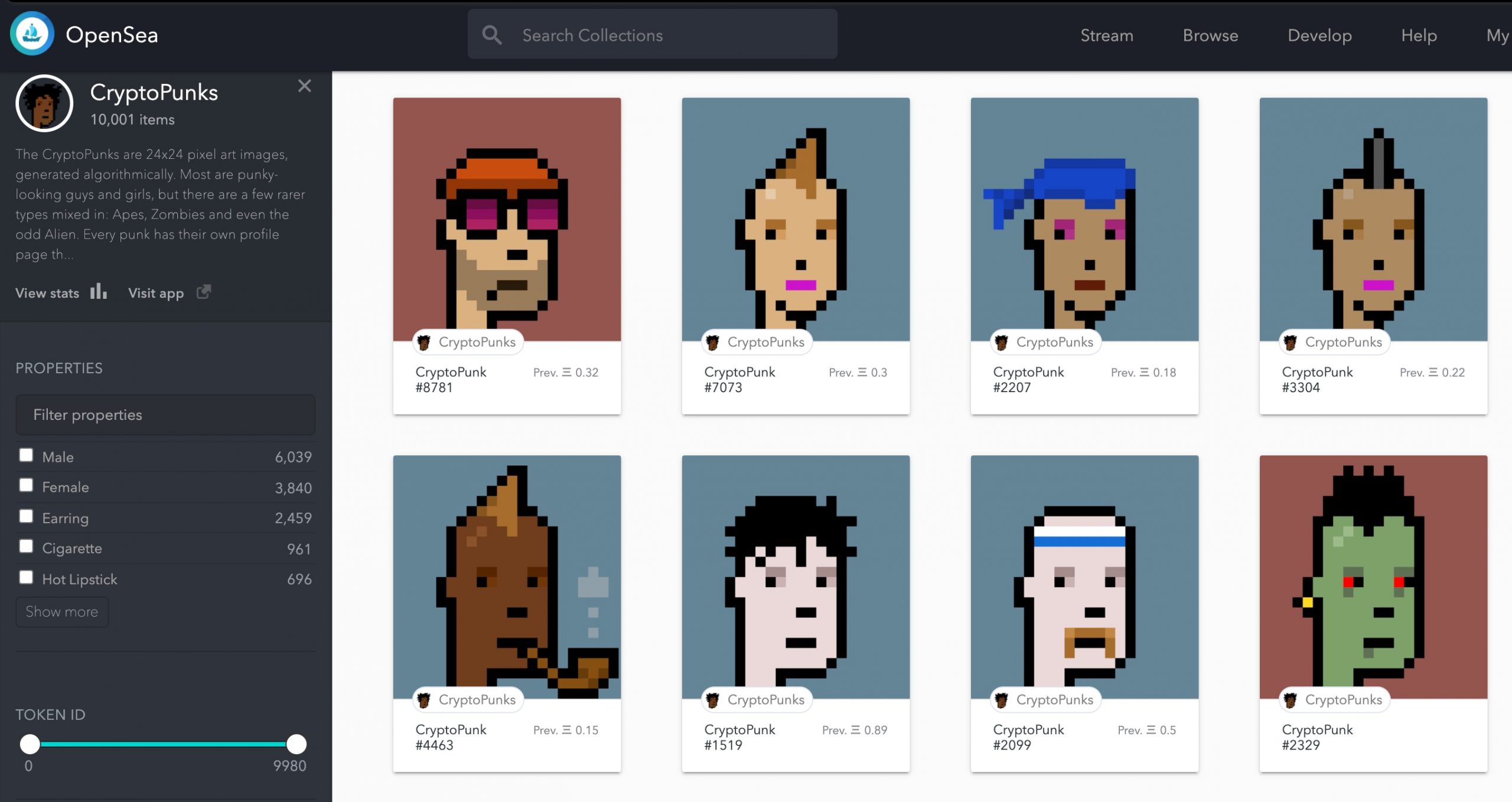 CryptoPunks in August 2018, during the first wave of NFTs; source: Internet Archive.

Incidentally, the original CryptoPunks were created before ERC-721 existed, so they were developed by “modifying the ERC-20 code just enough to produce non-fungible items.” They’ve since been “wrapped” into ERC-721 tokens, allowing them to be traded in marketplaces like OpenSea.

Fast forward to February 2022, and OpenSea describes itself as “the NFT marketplace with everything for everyone.” In an introductory video, OpenSea defines NFTs as “any digital unique ‘thing’ that can be bought, sold, or traded online.” Examples include “art, virtual experiences, your favorite band’s demo, virtual property.”

Despite expanding the definition of NFTs over time to include “everything,” OpenSea’s top five collections as of today are all collectibles.

OpenSea Top NFTs over the past 30 days

Beyond Apes and Punks: NFT = Rights

So when will we see a breakthrough non-collectible NFT? One person more qualified than most to answer that question is William Entriken, the project lead when ERC-721 was created and now an independent consultant for blockchain projects. In a recent interview, Entriken said that the next wave of NFT growth will be driven by “influencers of non-technology things — makeup, fashion, art, […] musicians.” He thinks these new NFTs won’t get caught up in a speculative frenzy.

“Right now, everything’s like talking about dollars and Coinbase and money and trading,” he said. “Trading doesn’t really apply so much to some of these new NFTs that we’re going to see, because there’s not really monetary value.”

He didn’t mention specific examples, but one I can think of is NFTs from musicians. Buying an NFT from a musician you’re a fan of might confer certain benefits to you that only you and other super-fans are interested in — advance tickets to their concerts, a behind-the-scenes blog, etc. As Substack author Dan Fowler nicely put it, in this scenario “an NFT is predominantly a vehicle in which to sell rights.”

This is already starting to happen with early adopter musicians. Steve Aoki, a popular DJ, is launching an Ethereum NFT membership club called A0K1VERSE. According to crypto news site Decrypt, “holders of Aoki’s NFT Passport will gain access to various benefits, including live and metaverse concerts and events.” 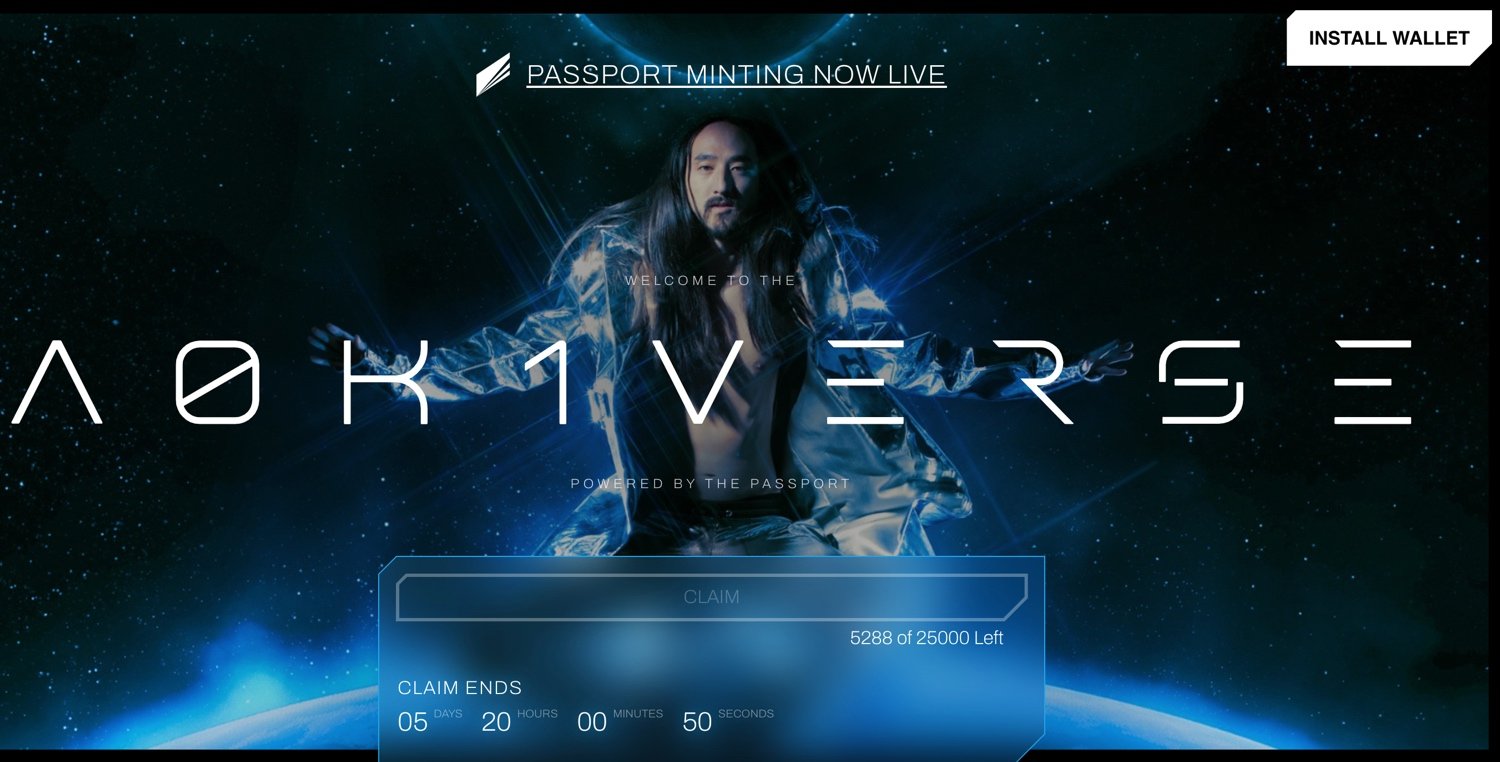 It’s a fascinating time for NFTs. Firstly, because there is a “threat” of centralization by NFT platforms like OpenSea (I put that word in air quotes only because Web3 proponents claim to be anti-centralization). Secondly, and in my view more importantly, the true market for NFTs would seem to be more of a rights-based use case rather than the speculation-based one we’re experiencing right now. Creators selling an NFT to confer rights makes a lot more economic sense to me than buying a digital cartoon or artwork and hoping you can on-sell it to another sucker for more money.