Can You GitOps Your APIs? 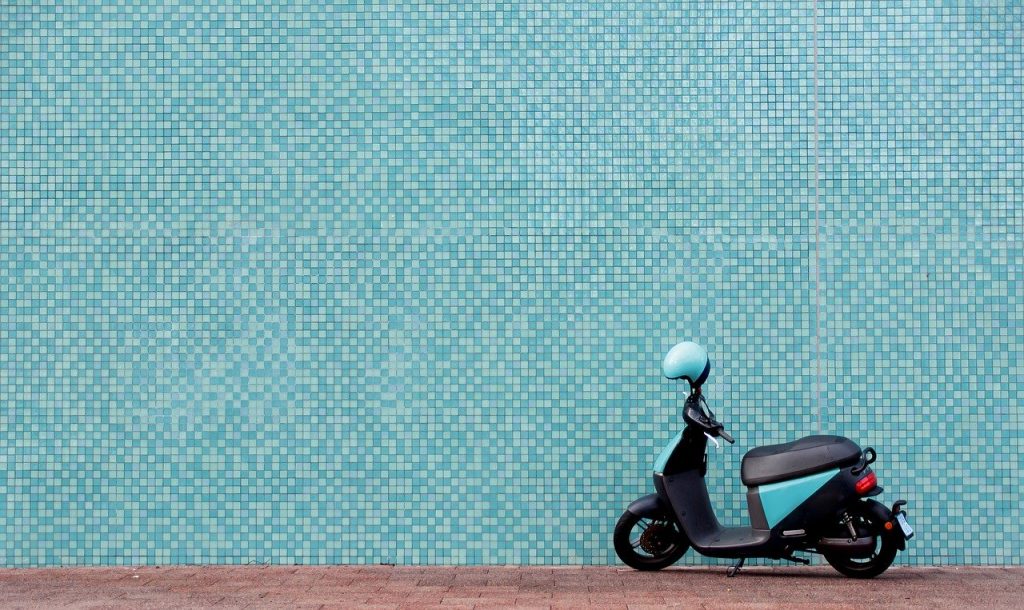 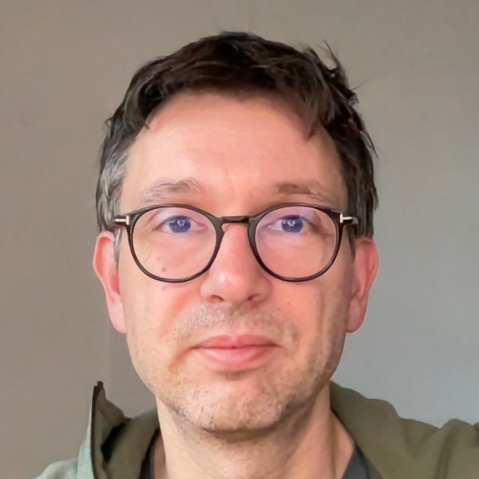 Ole Lensmar
Ole is CTO of Kubeshop. Ole started building HTTP/XML-based APIs in the late '90s and has served as CTO at several startups and companies since then, including SmartBear, and as product architect at Ambassador Labs. He was co-founder of base8, an XML-oriented consulting company, and Eviware Software, where he created SoapUI, one of the most used open source testing tools. He served as the chairman of the OpenAPI Initiative from its inception in early 2016 until late 2020.

The management of large-scale infrastructure is increasingly turning toward GitOps and Infrastructure as Code. In the classic pets-vs.-cattle analogy (sorry to the vegans), these techniques allow you to easily replicate and replace infrastructure when things go wrong, dramatically reducing the cost and complexity of management.

In addition, they become a single source of truth to understand the current state of your infrastructure and what has changed.

At the same time, just like “Software is eating the world,” APIs are eating software. OK, maybe not eating, but certainly powering.

They are everywhere and have become the standard way to expose functionality. However, the way we currently create and build our APIs does not always match our best practices for running infrastructure.

A code-first approach to APIs is a more traditional approach. Developers receive business requirements and code the API, leaving the formal documentation until later, or most commonly, not at all. Platform teams will be blocked until the initial release then be required to do a lot of manual testing to make sure everything is configured correctly.

On the other hand, in a design-first approach to API development, APIs are first defined then coded. This definition provides clear and unambiguous documentation and acts as the “source of truth” for all aspects of the team’s development from frontend to backend to microservices, similar to the way Git becomes your source of truth in GitOps. Design-first APIs create a common understanding of both functional and non-functional aspects of your software’s behavior. In a nutshell, it answers the question: “What can I make this API do?”

The OpenAPI specification has become ubiquitous in the modern world of developing APIs because it is a simple and standard way to describe and document your APIs. In addition, one major benefit of OpenAPI is that it is machine-readable. Based on the content of your OpenAPI definition, software can be written that interacts with your API. For example, Swagger UI provides a nice user interface where developers can test and become familiar with your API and OpenAPIGenerator can generate clients and servers from your OpenAPI definition.

Once defined, this definition can drive a multitude of downstream activities, including generating stubs to ensure developers adhere to the API, creating mocks to enable testing, building and integrating documentation, and constructing deployment artifacts. These tasks can often be done in parallel and in an automated fashion. 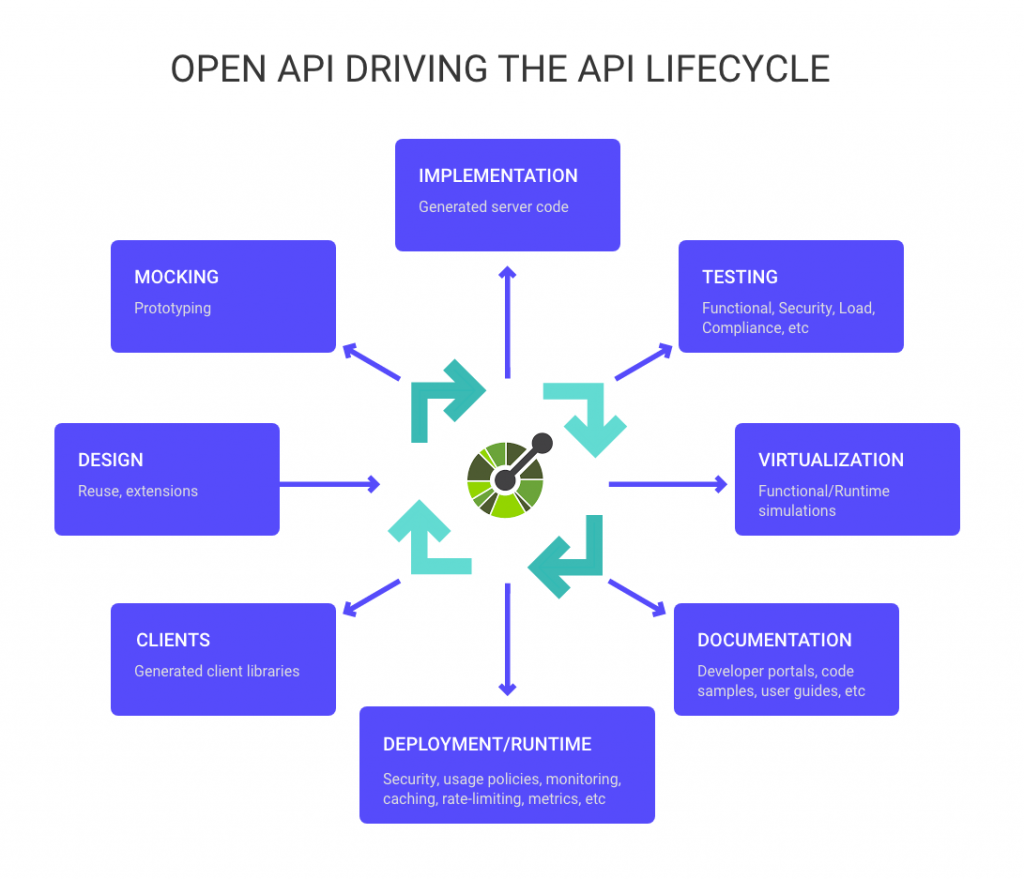 State of APIs in Kubernetes

Therefore, to successfully deploy their APIs to Kubernetes, developers or their DevOps teammates currently need to spend their time learning new Kubernetes resource formats and keeping those up to date as their API evolves, rather than actually designing and implementing their APIs. And their DevOps engineers need to worry about developers tampering with meticulously crafted Helm charts rather than just writing their APIs!

We are a team of experienced technologists creating open-source tools, which help teams build cloud native applications easier, better, faster. Kubeshop is backed by the most successful investors in the software industry who see Kubernetes as the foundation for building the software of tomorrow. Kubeshop and TNS are under common control.
Read the latest from Kubeshop

Kubernetes needs a “single pane of glass” source of truth of the app’s configuration and how the API works to bring it into the GitOps era.

Bringing GitOps to Your Kubernetes APIs With OpenAPI and Kusk

The OpenAPI specification gives us the ability to declaratively define APIs. It also already contains most of the information we need for an ingress configuration, is extensible via extension annotations, and given the ubiquity of OpenAPI, many API developers are comfortable with this format. Using OpenAPI as a source of truth reduces repetition by bringing information already in your OpenAPI specification into ingress resources. It also eliminates the need to learn how to write ingress resources.

Enter Kusk and Kusk Gateway, an open source attempt to fill that gap in the OpenAPI-Kubernetes toolchain.

(overly simplified Kusk workflow)
These are the basics of Kusk Gateway.

Kusk (Swedish for coachman) automates the generation of ingress resources for various popular ingress controllers by treating your OpenAPI specification as the source of truth for their configuration. Kusk currently supports generating configurations for Ambassador, Traefik, Linkerd and Nginx-Ingress. And thanks to an x-kusk OpenAPI extension, API developers can add Kubernetes and QoS-related metadata to their OpenAPI definition, which Kusk will automatically transform to ingress-controller-specific configurations, including things like:

Platform teams can feed Kusk the API’s specification and have ingress resources ready to go and up to date with any changes being made to the API. And just like with GitOps, this can be automated as part of the CI/CD pipeline, meaning no manual editing and fewer errors.

While Kusk helps you adopt an OpenAPI-first approach to API development with an existing ingress controller, it doesn’t really allow you to tap into the full potential of your OpenAPI definition, which is why the Kusk project also includes a dedicated ingress controller that uses OpenAPI as its primary source of configuration: Kusk Gateway. Using Kusk Gateway as the ingress controller, API developers and DevOps engineers can use an OpenAPI definition directly to configure the exposure of their APIs — no intermediate configuration generation necessary! 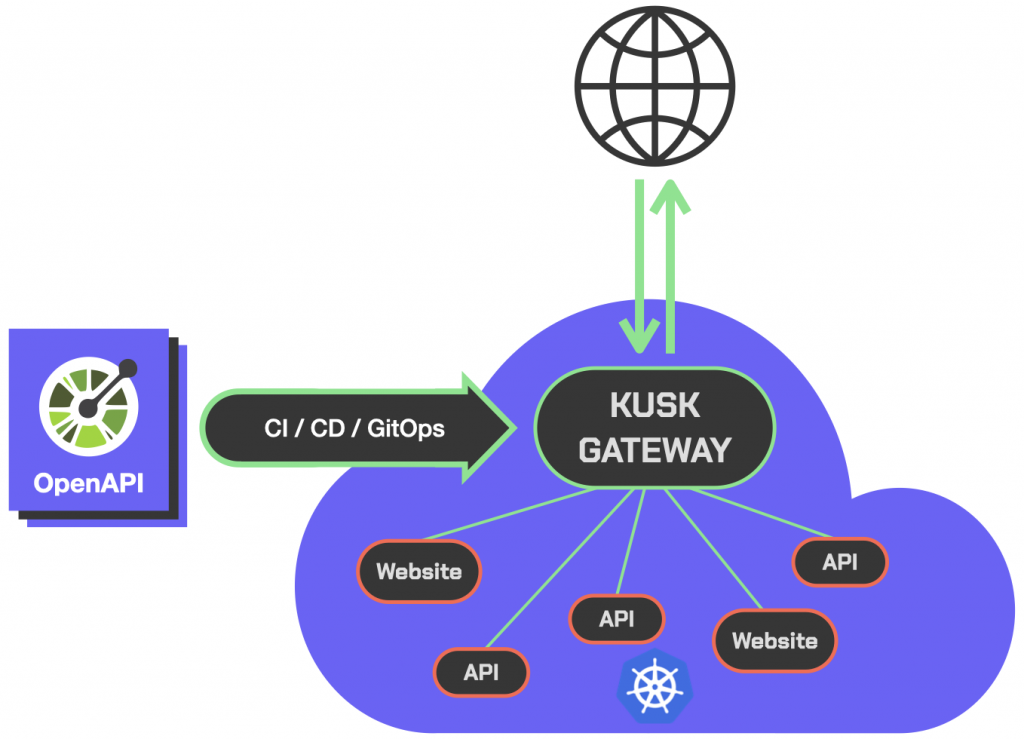 The Kusk Gateway approach to OpenAPI-first development provides a number of benefits:

Under the hood, Kusk Gateway is powered by Envoy Proxy, a battle-tested, and production-ready proxy that routes traffic to services defined in your OpenAPI specification.

If you’re adopting a design-first approach for your APIs (which you should be!) and are moving into Kubernetes, Kusk enables you to:

Give Kusk or Kusk Gateway a try and let us know if it does (or doesn’t) help your developers and/or platform engineers improve their everyday API development workflows.

Check out the GitHub repo and full documentation to learn more about Kusk and Kusk Gateway and download their latest releases. Leave a star on the repo to stay updated on new features and improvements, and join our Discord community to connect with others and get in touch with the Kusk team on any issues or suggestions you might have. We’re looking forward to it!

Kubeshop is a sponsor of The New Stack.