Contributing to the Open Source Ecosystem 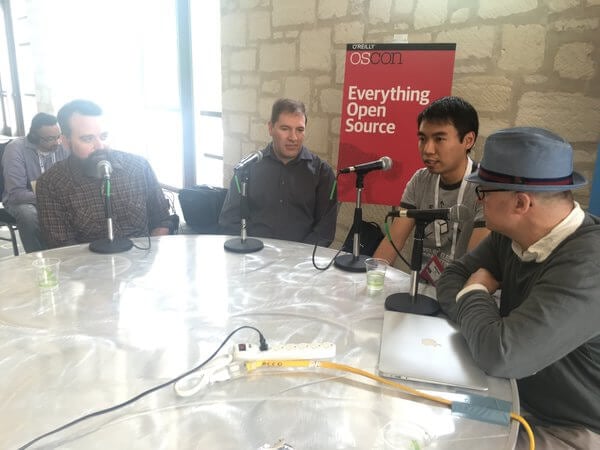 In this episode of The New Stack Makers, we learn more about Capital One’s progression in open source, its forthcoming open source project Hydrograph, and how other companies can embrace open source in their own stacks. At OSCON 2016, the New Stack founder Alex Williams spoke with William Ma, Capital One senior software engineer; Jared Smith, who manages Capital One’s open source community outreach, and Michael Coté, director of technical marketing at Pivotal.

Capital One at OSCON: What’s in Your Captain’s Log?

Ma kicked off the discussion by offering some background surrounding the next of Capital One’s open source projects, an ETL extraction tool for Hadoop processes, dubbed Hydrograph. Though not yet open source, Capital One plans to have the project open sourced later in the year. “Why we open sourced Hydrograph is, we believe this is a need in a lot of different organizations, such as Capital One. By open sourcing this, we can get contributions from other organizations that have similar interests,” Ma said.

Open-sourcing Capital One’s software is something Smith focuses on in his role, with many projects slated to be open from the beginning. He noted that new projects in particular are started by asking if they should be open source. Doing so requires commitment, though.

“The number one thing is open and transparent communication. That’s key for every open source community. Two, is trying to — whether it’s via documentation or other methods — to help save that institutional knowledge and transfer it to the next generation of users. Whether that’s with a good wiki, a search engine on the site, or documentation,” Smith said.

Promoting one’s open source project has become simpler with code repositories such as GitHub, Coté noted. “I think nowadays you are basically doing things in GitHub. That’s your captain’s log. What something like that does, is it automates your self promotion. You have a centralized place where all your code, your website, and issue tracking is happening.”

Discussing open source, Coté highlighted that over the last twenty years, the focus has shifted away from “Crusading against the money barons,” of the late 1990s, to wanting to analyze, discuss, and explain the ideas and concept behind open source. That being said, he admitted that getting enterprises involved in open source has always been “a bit of a let-down,” in terms of getting them to be more open.

Some of the questions @topopal had to start answering when #capitalone started its open source journey. #OSCON pic.twitter.com/52yYPVGBFa

Smith countered that by offering what enterprises can do to become better open source citizens. “I’d like to see more of enterprises step up and contribute more to the base layers. A good example of that is some of the flaws we’ve seen in OpenSSL lately. A lot of people were using the software, but not a lot were contributing back. If you depend on a particular library or a particular piece of your stack, contribute back, contribute time, developer resources, or even a space for a meetup to come talk about it.”

“I think the beauty of Hydrograph is we’re using it internally as well as open sourcing it. We’re not just doing it to create something open source. We’re using it ourselves,” Smith said.