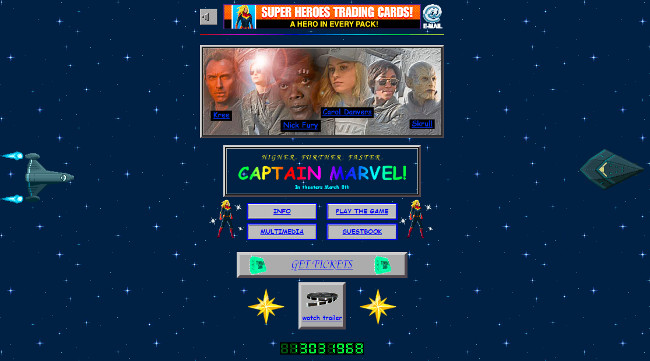 Last week saw a poignant reminder of how technology confronts the passage of time, when Marvel Entertainment quietly launched a new website for its upcoming movie “Captain Marvel” with an intentionally late 1990s retro design, bringing back some design memories for the geeks of that day.

Designer and front-end web developer John Ossoway tweeted, “I love this so much. Me to my kids: ‘Kids, kids, come and look at what the internet looked like when I was younger!'”

MovieWeb joked that the site “will have you nostalgic for dial-up,” adding, “The only thing that could have made the Captain Marvel site even better is slow page loading, just to give it a real touch of what it was like surfing the net in the dark ages.”

Where is Netscape Navigator when you really need it? pic.twitter.com/P9XwRChfor

The movie is set in the 1990s. When renegade space soldier Carol Danvers falls to earth, she lands in a Blockbuster video — and the site was intended to play up this aspect. The words “Captain Marvel” even blink, as though they’re using the infamous <BLINK> tag — introduced in the original Netscape Navigator browser in the mid-1990s — which has long since stopped being supported by major web browsers.

The site uses old-school .gifs for images — in some cases, animated .gifs. There are even some animated American flags, and the movie’s trailer is only available in an embedded grey media player — complete with clunky 1990s controls. Alluding to the movie’s race of good-guy aliens, its blue title bar identifies it as a Kree Player 1.0. It’s the same 30-second ad broadcast during this year’s Super Bowl (below) — but the retro site reduces it to a height of just one inch. (Back in the bandwidth-constrained ’90s, videos were smaller to reduce their file size and download times.)

“The size of the video in the player at the bottom is spot-on,” raved the Hollywood Reporter, “and was considered cutting edge at the time.” MovieWeb calls it “a take on the old Real Player.” 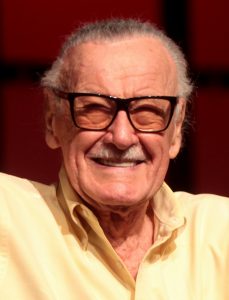 Even its defects have a hidden poignancy. A Twitter user named Monte Thigpen spotted a clever use of “Excelsior!” the catchphrase for Marvel Comics editor Stan Lee, who died three months ago at the age of 95. “The missing photo in the ‘Top Secret’ section is titled excelsior.jpg :/ RIP Stan!!”

Neon-green digits display the number of visitors, though it seems to be stuck on 13,031,968. Comic book geeks will remind you that Carol Danvers made her debut as the missile base head of security in issue #13 of Marvel Super-Heroes, which appeared in March of 1968.

But the site comes with some sly improvement as well. It improved on ’90s web-design standards by adjusting to fit the user’s screen size, whereas many sites in the 1990s simply displayed a message that they were “optimized for 800×600 screen resolutions.”

It’s interesting to see which memories from the 1990s made it into this retro site. The first comment in the guestbook says “All your base are belong to us!” — an allusion to a badly-translated line of dialogue from a 1989 video game that became a viral meme in 2001.

“Is anyone else concerned about Y2K?!?” asks another comment, evoking the memorable dread about whether the world’s computer programmers had adequately prepared for the moment went the world’s dates switched from the 1900s to the 2000s.

Of course, there’s also the inevitable nay-sayer posting “This whole ‘Internet’ thing is a fad.”

Marvel Entertainment’s director of software engineering, Lori Lombert, revealed that behind the scenes, there was even more authenticity. She acknowledged on Twitter that they’d used a discontinued HTML editor — specifically, Microsoft’s FrontPage — to create the webpage. And then they’d hosted it on Angelfire, one of the few web-hosting sites from 1996 that’s still around.

It’s been fun to see which memories came flooding back for the geeks of 2019 with this site.

David C. Bilas, now the director of mobile apps at Progressive insurance, tweeted “Dang, I forgot about FrontPage. Those were good days.”

One user even cropped the site’s main image, and made it into a custom skin for their vintage Winamp media player.

Dieter Bohn, the executive editor at the Verge, points out that the simple site still has a relatively large file size, which would take a long time to download on a 90s-era 28.8k modem. And below each face in the image is a blue hyperlink that takes you to the appropriate part of the page — though Bohn remembers that it wasn’t that simple. In the 1990s webmasters would actually map different hyperlinks to different clickable regions hidden within the same image.

“In 1995 WE CUSTOM SLICED IMAGE MAPS,” he posted on Twitter, adding “AND WALKED TO SCHOOL UPHILL THROUGH THE SNOW BOTH WAYS.”

Bohn also noted that the source code for the site’s body fits into a single tweet. In fact, the page’s entire source code is just 5,173 characters. It’s being assembled by JavaScript (that’s hosted on an external server), including a compact 26,334-character stylesheet (with superfluous whitespace removed).

Bohn still calls it “a very clever and fun website” that “plays on what we would like to imagine the web looked like in 1995.” And a few other Twitter users seemed to be looking for some of the worst features of 1990s web design.

“I hope there is a wav file that only plays after downloading it for over 10 minutes.”

James Thomson, the indie Mac/iOS developer behind the original PCalc app, actually tested the web site in some 90s-era browsers on a virtual machine — only to discover that it wouldn’t load. Netscape gave an error message about files “of type application/javascript.”

A Twitter user named nivrig, who describes himself as a “respawned 80s game developer” observed that it also wouldn’t load in an Amiga IBrowse 2.4 due to an “unsupported encryption protocol” error.

So there was lots of discussion about what we remember from the 1990s — but maybe that ultimately says something about all of us. Using nostalgia as a marketing tool tends to be “hugely effective,” Marlene Towns, a professor of marketing at Georgetown University’s McDonough School of Business, told Wired.

Share this story
RELATED STORIES
Platform Engineering Is DevOps Evolved, New Report Shows How Is Platform Engineering Different from DevOps and SRE? Why Jump from the Safety of a Big Tech Job into Risky Web3? Entrepreneurship for Engineers: Founders Need Community, too Charity Majors: Taking an Outsider's Approach to a Startup
Share this story
RELATED STORIES
How to Bridge the Developer-Designer Gap Engineers Must Work With Product Managers for Success A Technical Guide to Burning Down a Troll Farm Entrepreneurship for Engineers: Founders Need Community, too Adobe's Internal Developer Platform Journey and Lessons
THE NEW STACK UPDATE A newsletter digest of the week’s most important stories & analyses.
We don't sell or share your email. By continuing, you agree to our Terms of Use and Privacy Policy.
TNS owner Insight Partners is an investor in: Real.