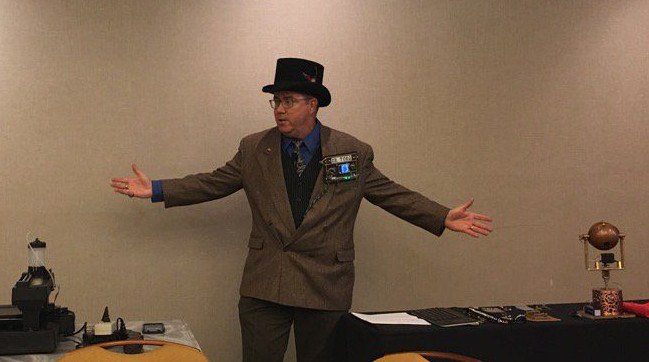 As an engineer, writer and speaker, my job is to introduce and help people interact with new technology.

For a long time, I believed everybody was just as enthusiastic about the awesomely interesting microcontrollers, radios, mechanisms, software, systems, and networking as I was.

In fact, even techies frequently struggle to warm up to late-model technology. So really, my job is one of persuasion.

The first step on that journey is to grab attention and get conversations started. Here are a couple of success techniques that have worked for me for introducing new technology. Feel free to try them when pitching your ideas, products and services.

Years ago, I combined an Arduino microcontroller with a Dallas DS18B20 digital thermometer chip and a 60-mW Xbee transceiver. The device was placed on a little picnic table at my subdivision’s beach lot. I then drove around the roughly 1.5-mile diameter lake, with a matching Xbee transceiver hooked up to my Linux notebook. During the lake’s circumnavigation, a Linux terminal displayed the temperature data coming from the Dallas sensor once per second. There were a few spots where I lost the signal and didn’t see any new data. How crazy is that?

While wowing my family, friends and associates with this absolutely astounding technology, it gradually sank in that showing them a breadboard, a tangle of jumper wires and scrolling lines of text on a terminal screen simply wasn’t all that interesting. Who cares, right? There was no connection to day-to-day things, which made it hard for people to even ask questions. Lot’s of “That’s nice” and not much more.

Of course, every marketer knows the solution.

You need a hook. Something that gives the tech context. Something that relates how it’s useful, or has a purpose or is at least interesting to someone. The hook piques the observer’s curiosity.

Steampunk is one of my hooks.

We’ve all heard of the value of students learning STEM (science, technology, engineering and math). Add “art” in there and you have STEAM. The brass and copper parts, exaggerated mechanisms, antique feel all attach “steampunk” to ideas that techies, educators, engineers and “creatives” frequently encounter.

Giving a project the steampunk treatment requires knowledge of textures, colors, style, arrangement, physical look and so on. Falling under the realm of the artist, steampunk provides an audience framework, at the subconscious level.

The other reason I like steampunk is that it’s easily recognized by people outside the tech world. There are even communities, organizations, and events that promote the steampunk lifestyle. Many people like steampunk because it’s fun, positive and provocative. It tends to be outlandish and not always entirely serious. People look at it and just have to say “Whhhaaat?”

My steampunk-themed prototype gadgets, like the eyeball, conference badges, and the MQTT/CHIP data hub have all been popular with readers and conference show attendees.

Wrapping your microcontroller-based physical computing gadget in a steampunk theme isn’t always enough to get people interested. Lots of people are simply too shy to approach you or are too “head down, plowing forward” to be curious about one of your one-off gadgets and the potentially important new tech trend behind it.

My solution was to create a fictional character who lets me easily break the ice when I walk around and socialize. I take the initiative and actively approach people in my Dr. Torq persona. 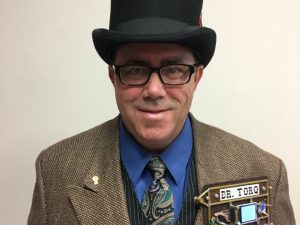 People don’t expect you to wear 1880’s attire and demo steampunk physical computing systems. Leverage that subtle departure from reality to your advantage.

Give It a Try

I think the art of persuasion is an important skill for off-the-shelf hackers. I’m thankful to have found a fun way to integrate it into my tech activities.

Keep in mind that stepping out in unusual clothes and carrying around one-off, DIY devices might be a little intimidating the first few times you try it. Just keep it classy and proper and with passion and respect. I promise that responses will be positive.

People will share their attention if you give them a good show.

Rob "drtorq" Reilly is an independent consultant, writer, and speaker specializing in Linux/OSS, physical computing, hardware hacking, the tech media, and the DIY/Maker movement. He provides a variety of engineering, business and special project services to individual clients and companies....
Read more from drtorq
SHARE THIS STORY
RELATED STORIES
What’s the Future of Feature Management? Kathleen Booth, Creator of the First Assembly Language eBay: Betting on Open Source Is Great for Your Business The Process Equation (Cadence Is Everything, Part 2) The Graph of Life in a Post-Relational World
TNS owner Insight Partners is an investor in: Torq.
SHARE THIS STORY
RELATED STORIES
AWS Brings AI/ML Training to Community, Historically Black Colleges eBay: Betting on Open Source Is Great for Your Business It's No Longer about How You Write Code but How You Operate It How and Why to Respond to Incidents the Right Way Tackling 3 Misconceptions to Mitigate Employee Burnout
THE NEW STACK UPDATE A newsletter digest of the week’s most important stories & analyses.
The New stack does not sell your information or share it with unaffiliated third parties. By continuing, you agree to our Terms of Use and Privacy Policy.