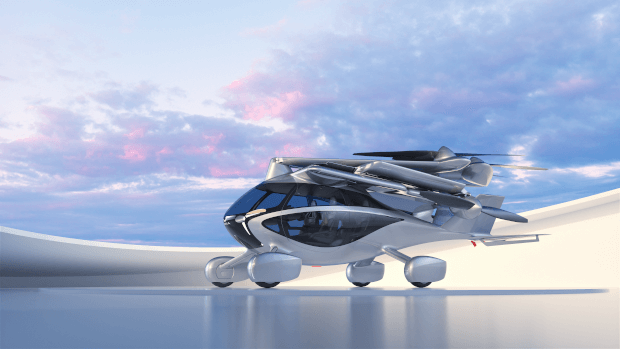 Last week, over 3,200 exhibitors sprawled out in the Las Vegas Convention Center for the 2023 of the legendary Consumer Electronics Show. According to the convention’s web site, there were even more reporters covering those exhibitors —  over 4,700 — as the technology press scrambled enthusiastically for their chance to glimpse the shape of things to come.

And in our futuristic society of 2023, still more people attended the event virtually — even teleconferencing in from outer space. (On Friday astronauts on the International Space Station made a downlink connection to the Las Vegas Convention Center to wow attendees during a special interview with CNN Business’s Jackie Wattles.)

The astronauts were showing off their own new technology — higher-resolution communications bandwidth. Their mission? “[E]ducating the CES community on avenues to utilize this one-of-a-kind incubator in low Earth orbit,” according to a press release.

It’s all part of the fun and the flash, that jumbled mix of surprises and the technologies — along with a little showmanship — that gives the annual CES show its own unique razzle-dazzle.

The Freedom to Fly

This year saw an announcement that everyone’s been waiting for: a flying car. (Specifically, the ASKA A5.) Its makers describe it as a fully functional prototype of “the world’s first four-seater electric vehicle that can travel by road, and up to 250 miles by air on a single charge.” (Offering the “freedom to drive and fly,” as its website puts it.) 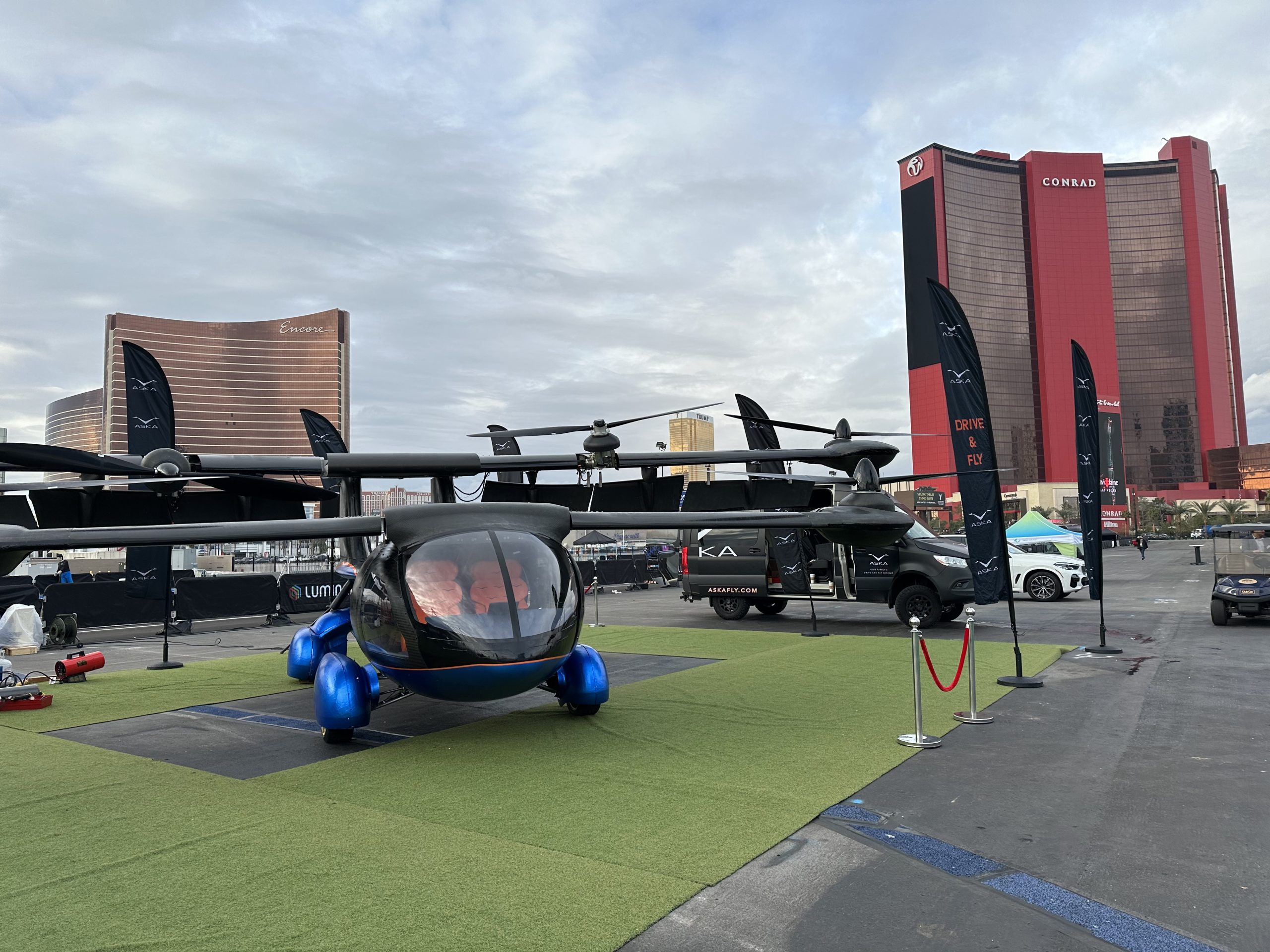 While the vehicle still fits in a conventional parking space, it’s also equipped with wings that can be folded out, after which it can perform vertical take-offs and landings.

The YouTube channel Flying Car News has footage of the device in action, while the company also announced an on-demand ride service “in major cities” targetted for 2026 (“subject to standard regulatory approval and certification”). Beyond that, they’re also ambitiously predicting that their product has “significant business potential in emergency response use, military use, as well as on-demand ride-sharing mobility services.”

The #ASUS ProArt Studiobook 16 now comes with a #3D display, and as gimmicky as it sounds, it was one of the coolest things at #CES this year so far…

But it was far from the only gee-whiz moments at this year’s CES. Sweden’s Candela unveiled a $390,000 electric hydrofoil that, according to CNET, “hovers above the water and features a completely redesigned propulsion system that operates underwater, making a quiet ride almost silent.” Or, as CNET’s Bridget Carey puts it in a video report, “It’s really cracking the code for electric-powered, long-range high-speed travel at sea.”

For the first time, Amazon demoed its rolling “household robot” Amazon Astro — a $999 device introduced a little over a year ago, but still only available “exclusively by invitation”

CES has always been a nurturing ground for the dream of robot-powered consumer interactions — and this year’s exhibitors showed off their latest attempts. In August Ottonomy.io launched their “Ottobot 2.0” robot for “hyperlocal deliveries.” (As it rolls around, a display on its front beams messages like “Hi, I’m Ottobot. Scan the QR code, shop online, and receive at the gate”.) To unlock the onboard “cabins” with their ordered items, shoppers simply hold up their phones — and there are also apps for vendors.

After its release in August, Ottobot 2.0 is already servicing 14 different locations around the world, according to a promotional video released Wednesday, and the Associated Press reports that Ottobots are already delivering tasty snacks ordered by travelers in airports in Cincinnati, Pittsburgh, and Rome.

Now for 2023, they’re announcing Ottobot Yeti, promising it’s “reinventing last-mile deliveries with a new automated dispense mechanism” in case no one’s around to receive the package. The company’s website proudly touts its “Robotics as a Service” model, with promotional materials detailing the “Ottonomy Cloud,” part of its Ottonomous Vehicle Software Stack offering functionalities like “fleet management”. Although the company’s promotional video seems to culminate by showing the dramatic moment when a delivered package misses a shelf and bounces onto the ground.

Rise of the Machines

So why exactly was there an appearance by Arnold Schwarzenegger? Because he’s appeared in several futuristic science fiction films, the CEO of BMW explained, so “If you want to know something about the future, he’s the man to ask!” Schwarzenegger struck a vague philosophical note, telling his audience that “In most of my movies, the machines were the enemy, but today we’ve found ways to use technology as an ally.”

And then he showed humanity’s latest triumph: a color-changing electric car.

But that’s just the beginning. “E Ink panels allow you to program emotive, human-like faces into the car’s grille,” reports CNET, “and sophisticated AI technology is able to talk to you less like a servant and more like a buddy.” They note that while it’s just a concept car — that is, a one-off prototype made to showcase upcoming technologies — “some of its features will trickle out to BMW’s actual cars.”

Watch how the room is made of projected walls that change with the LG TV #CES pic.twitter.com/1SJtXdg7SQ

Color changing seemed to be a theme. LG introduced its color-changing refrigerator MoodUp.

And when Volkswagen revealed its upcoming electric sedan, the ID.7, it also presented its own special concept vehicle with a unique paint job that lit up (thanks to the electronic lights underneath each of its 22 different sections of paint).

While that may not be available to customers when they launch the vehicle (“by 2026”), the company press release argues that the light show “symbolizes the next step in the digitalization of the future flagship model of Volkswagen’s EV family.”

Other high-tech features demoed included voice-activated “smart air vents” that move to better cool or heat the car’s interior (even warming the steering wheel so your hands don’t get cold). And in addition, Volkswagen says the ID.7 “can detect when the driver is approaching with their key and can start to cool the interior on hot summer days or heat the interior on cold days before the driver gets into the vehicle.”

Maybe Volkswagen is just looking ahead to the consumer products we’ll need on an increasingly warming planet. This year’s CES picked up the theme, showcasing several environmentally-conscious, but USA Today’s reporter spotted one particularly 21st-century marvel: “a palm-sized baby houseplant bioengineered to capture and contain the most dangerous indoor air pollutants in our homes.”

“The future of plants is here,” promises the website for Neoplants, arguing that the most powerful piece of technology in the world is — nature. “It’s time we magnify its power to heal our environment…” explains a video on their site, teasing their first generation of genetically modified plants, “bioengineered by our team of 20 scientists to capture and recycle some of the most dangerous indoor pollutants. Good for the world, gorgeous for your home. This is a super plant with superpowers.” (The plants are priced starting at $179.)

Of course, technology can have a role in hurting the environment too. iFixit even released a sardonic video awarding their “2023 CES Worst in Show Awards,” arguing that this year’s only theme seemed to be “throwing everything at the wall to see what sticks.”

Sometimes literally, in the case of the Displace Window TV, a 55-inch screen which according to Engadget “uses active-loop vacuum technology to suction itself into place.” Declaring it to be the environmentally worst product at CES was Shanika Whitehurst, the associate director for Consumer Reports’ Product Sustainability team. In iFixit’s video, she explains the behemoth of a TV screen is all powered by just four lithium-ion batteries — which, while rechargeable, last for only one day.

“The real question that comes to my mind is why?” Whitehurst asks. “You could’ve just made a plug, like most TVs do!”

But in true CES spirit, one person who was still bullish on the potential of green tech was presenter Arnold Schwarzenegger. “I often tell people that when it comes to our environment, ‘Technology will save us all’,” Schwarzenegger told his audience.

Could technology really “save us all?” As Neoplants says in its own video “When we allow our imaginations to create the magical, extraordinary missions become achievable.”

But maybe Arnold Schwarzenegger summed up the spirit of CES more completely, when he told the audience, “The bottom line is technology can solve all of the biggest problems. It can change the world.

“And like you’ve just seen — it can be really, really fun.”

SHARE THIS STORY
RELATED STORIES
Op-Ed: The Rise of AI Content Generators Is an Affront to Creativity Why 'Explainable AI' Can Benefit Business How to Support a Million Users on Your Website: A Success Story Java's James Gosling on Fame, Freedom, Failure Modes and Fun 5 Ways ChatGPT Could Supercharge Chatbots
SHARE THIS STORY
RELATED STORIES
What It's Like to Run a Mastodon Server in the Musk Twitter Era How Will Tech Jobs Change in 2023? Entrepreneurship for Engineers: Building for Customers’ Love How Not to Waste a Senior Hire Donald Knuth's 2022 'Christmas Tree' Lecture Is about Trees
THE NEW STACK UPDATE A newsletter digest of the week’s most important stories & analyses.
The New stack does not sell your information or share it with unaffiliated third parties. By continuing, you agree to our Terms of Use and Privacy Policy.