ChaosNative announced at its Chaos Carnival conference two new versions of its chaos engineering tool built for large organizations.
Jan 31st, 2022 10:58am by B. Cameron Gain 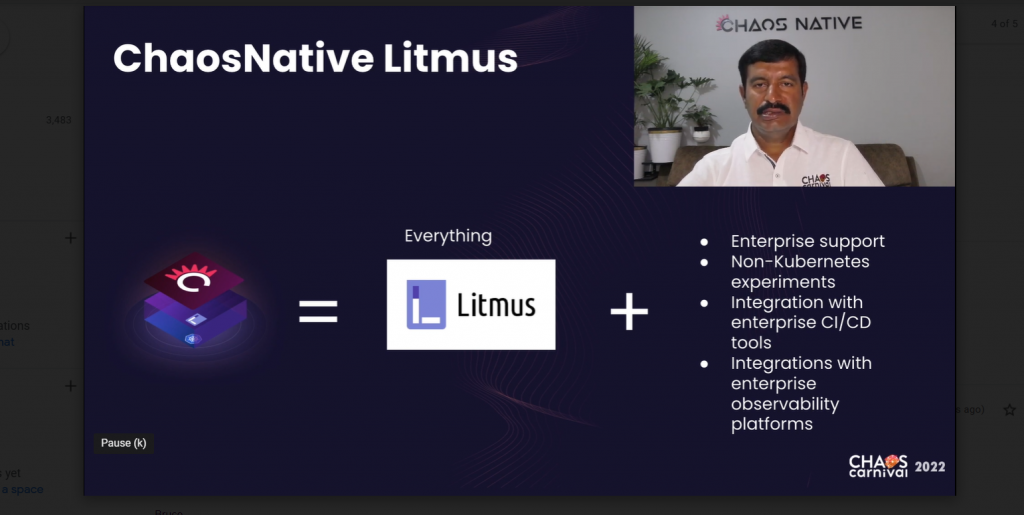 Chaos engineering has emerged as an increasingly essential process to maintain reliability for applications in cloud native environments. Unlike pre-production testing, chaos engineering involves determining when and how software might break in production by testing it in a non-production scenario.

Think of chaos engineering as an overlap between reliability testing and experimenting with code and applications across a continuous integration/continuous delivery (CI/CD) pipeline, by obtaining metrics and data about how an application might fail when certain errors are induced.

LitmusChaos is one of the more popular open source alternatives for chaos engineering, with 2,500 GitHub stars and 400 forks. ChaosNative, LitmusChaos’ creator, announced on Friday the general availability of two enterprise versions of the platform during its annual users’ conference, Chaos Carnival 2022.

During his Chaos Carnival keynote, Uma Mukkara, ChaosNative’s CEO and maintainer of LitmusChaos, described how his company’s newest version of Litmus, built on top of open source Litmus, offers plugins that integrate with CI/CD or observability platforms.

More importantly, it also provides a lot of advanced experiments for non-Kubernetes targets, such as VMware and other cloud platforms and bare metals as well, Mukkara said.

LitmusChaos will develop “more chaos experiments for different applications: not just for Kubernetes, but applications that run on cloud native ecosystem or otherwise, and legacy ecosystems as well,” Mukkara said.

“So, in other words, we can say that we are democratizing chaos experiments,” he added. “We can expect more application-based experiments” to become available.

During the course of 2022, “experiments will become a commodity,” Mukkara said. “What this means is that you won’t need to write basic chaos experiments yourself because they’ll be made available to you.”

@LitmusChaos CEO @Uma_Mukkara says “the execution environment” of litmus may “not be just for cloud native” and is applicable to “non-cloud native solution environments as well.” https://t.co/v8KzrcYmIL #ChaosCarnival2022 #keynote @thenewstack pic.twitter.com/JZPdLRymYS

LitmusChaos was created in 2017 and was approved to become a Cloud Native Computing Foundation (CNCF) incubation project from a CNCF sandbox level in January.

The open source platform supports more than 50 chaos experiments “that cover the entire range of Kubernetes resources,” Mukkara said. These include major cloud platforms such as those Amazon Web Services, Google Cloud Platform and Azure offer, as well as applications such as Cassandra and Kafka.

For the enterprise versions, organizations seeking to integrate self-managed chaos engineering into their workflow can download the 30-day trial version. DevOps engineers, SREs and organizations seeking chaos as a service can sign up for free, get instant access to their own Litmus control plane, and connect their chaos targets.