Charity Majors: Taking an Outsider’s Approach to a Startup

In this episode of the Tech Founder Odyssey series, the co-founder of Honeycomb.io told how dropping out of college and solving sticky problems guided her path.
Sep 21st, 2022 1:04pm by Heather Joslyn 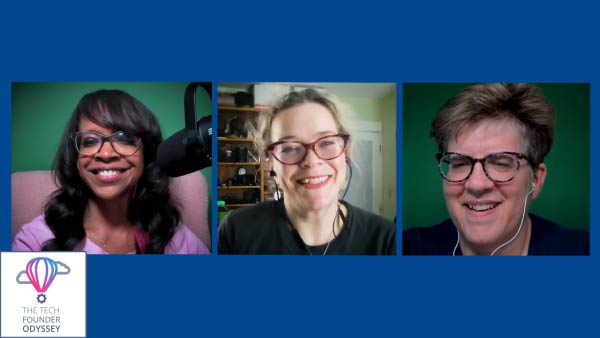 In the early 2000s, Charity Majors was a homeschooled kid who’d gotten a scholarship to study classical piano performance at the University of Idaho.

“I realized, over the course of that first year, that music majors tended to still be hanging around the music department in their 30s and 40s,” she said. “And nobody really had very much money, and they were all doing it for the love of the game. And I was just like, I don’t want to be poor for the rest of my life.”

Fortunately, she said, it was pretty easy at that time to jump into the much more lucrative tech world. “It was buzzing, they were willing to take anyone who knew what Unix was,” she said of her first tech job, running computer systems for the university.

Eventually, she dropped out of college, she said, “made my way to Silicon Valley, and I’ve been here ever since.”

Charity Majors: Taking an Outsider’s Approach to a Startup

Majors, co-founder and chief technology officer of the six-year-old Honeycomb.io, an observability platform company, told her story for The New Stack’s podcast series, The Tech Founder Odyssey, which spotlights the personal journeys of some of the most interesting technical startup creators in the cloud native industry.

It’s been a busy year for her and the company she co-founded with Christine Yen, a colleague from Parse, a mobile application development company that was bought by Facebook. In May, O’Reilly published “Observability Engineering,” which Majors co-wrote with George Miranda and Liz Fong-Jones. In June, Gartner named Honeycomb.io as a Leader in the Magic Quadrant for Application Performance Monitoring and Observability.

Thus far Honeycomb.io, now employing about 200 people, has raised just under $97 million, including a $50 million Series C funding round it closed in October, led by Insight Partners (which owns The New Stack).

This Tech Founder Odyssey conversation was co-hosted by Colleen Coll and Heather Joslyn of TNS.

Honeycomb.io grew from efforts at Parse to solve a stubborn observability problem: systems crashed frequently, and rarely for the same reasons each time. “We invested a lot in the last generation of monitoring technology, we had all these dashboards, we have all these graphs,” Majors said. “But in order to figure out what’s going on, you kind of had to know in advance what was going to break.”

Once Parse was acquired by Facebook, Majors, Yen and their teams began piping data into a Facebook tool called Scuba, which ”was aggressively hostile to users,” she recalled.

But, “it did one thing really well, which is let you slice and dice in real time on dimensions that have very high cardinality,” meaning those that contain lots of unique terms. This set it apart from the then-current monitoring technologies, which were built around assessing low cardinality dimensions.

Scuba allowed Majors’ organization to gain more control over its reliability problem. And it got her and Yen thinking about how a platform tool that could analyze high cardinality data about system health in real time. “Everything is a high cardinality dimension now,” Majors said. “And [with] the old generation of tools, you hit a wall really fast and really hard.”

And so, Honeycomb.io was created to build that platform. “My entire career has been rage-driven development,” she said. “Like: sounds cool, I’m gonna go play with that. This isn’t working — I’m gonna go fix it from anger.”

Yen now holds the CEO role at Honeycomb.io, but Majors wound up with the job for roughly the first half of the company’s life.

Did Majors like being the boss? “Hated it,” she said. “Constitutionally what you want in a CEO is someone who is reliable, predictable, dependable, someone who doesn’t mind showing up every Tuesday at 10:30 to talk to the same people.

“I am not structured. I really chafe against that stuff.”

However, she acknowledged, she may have been the right leader in the startup’s beginning: “It was a state of chaos, like we didn’t think we were going to survive. And that’s where I thrive.”

Fortunately, in Honeycomb.io’s early days, raising money wasn’t a huge challenge, due to its founders’ background at Facebook. “There were people who were coming to us, like, do you want $2 million for a seed thing? Which is good, because I’ve seen the slides that we put together, and they are laughable. If I had seen those slides as an investor, I would have run the other way.”

The “pedigree” conferred on her by investors due to her association with Facebook didn’t sit comfortably with her. “I really hated it,” she said. “Because I did not learn to be a better engineer at Facebook. And part of me kind of wanted to just reject it. But I also felt this like responsibility on behalf of all dropouts, and queer women everywhere, to take the money and do something with it. So that worked out.”

Majors, a frequent speaker at tech conferences, has established herself as a thought leader in not only observability but also engineering management. For other women, people of color, or people in the tech field with an unconventional story, she advised “investing a little bit in your public speaking skills, and making yourself a bit of a profile. Being externally known for what you do is really helpful because it counterbalances the default assumptions that you’re not technical or that you’re not as good.”

She added, “if someone can Google your name plus a technology, and something comes up, you’re assumed to be an expert. And I think that that really works to people’s advantage.“

Majors had a lot more to say about how her outsider perspective has shaped the way she approaches hiring, leadership and scaling up her organization. Check out this latest episode of the Tech Founder Odyssey.

Heather Joslyn is features editor of The New Stack, with a special interest in management and careers issues that are relevant to software developers and engineers. She previously worked as editor-in-chief of Container Solutions, a Cloud Native consulting company, and as...
Read more from Heather Joslyn
SHARE THIS STORY
RELATED STORIES
SLO vs SLA: What's the Difference and How Does SLI Relate? Internal Developer Portal: What It Is and Why You Need One Not All Superheroes Monitor APIs. Here Is Why They Should Optimization and Efficiency: How to Go All In on the Cloud P99 CONF: Sharpening our Axes to Battle Latency Misery
Honeycomb.io is a sponsor of The New Stack.
TNS owner Insight Partners is an investor in: The New Stack, Honeycomb.io.
SHARE THIS STORY
RELATED STORIES
P99 CONF: Sharpening our Axes to Battle Latency Misery PromCon 2022: Why Prometheus Had to Change Observability in 2022: It Pays to Learn Groundcover: Simplifying Observability with eBPF How We Manage Incident Response at Honeycomb
THE NEW STACK UPDATE A newsletter digest of the week’s most important stories & analyses.
The New stack does not sell your information or share it with unaffiliated third parties. By continuing, you agree to our Terms of Use and Privacy Policy.