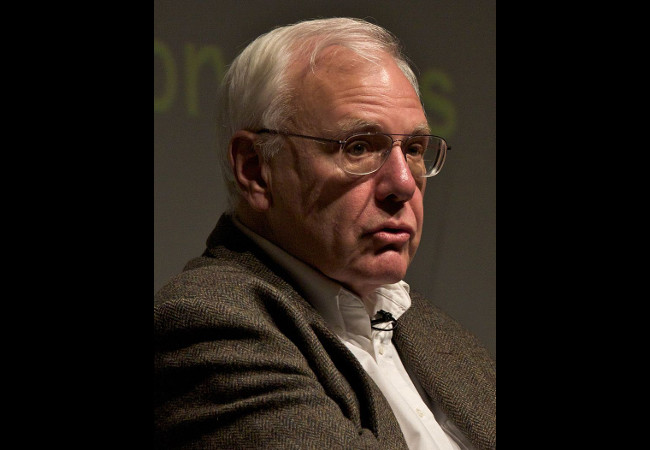 Word of the death of Charles P. Thacker spread quickly throughout the internet this week. What was a little slower in coming, however, were a full accounting of Thacker’s life, and his legacy. In truth, my writing of this post and your reading of it is a direct product of  Thacker’s legacy: the desktop computer. Indeed, one could even consider phones and other touch-screen devices to be his legacy as well.

He also played pivotal roles in the development of Ethernet and time-sharing hardware, among other innovations.

Before we dive in further, it should be noted that discussing computers and technology across the decades when Thacker worked results in a tangled spaghetti of stories: it was a very small world, and work in one place inevitably found its way into work somewhere else. Thus, to tell the story of Charles P. Thacker, we must veer off into some side-lanes of travel, to contextualize just what it was that inspired Thacker to pursue the types of projects he took on.

Thacker started his computer career in the late 1960s at University of California Berkeley, where he’d just finished up a degree in physics. In 1968, he joined the team on Project Genie, which would go on to develop the Berkeley Time-Sharing System. At the time, time-sharing was a big deal, still vaguely cutting edge, despite having been invented on the PDP-1 in 1957.

In Thacker’s day, one of the principle points of discussion, oddly enough, was just how a single computer could be divvied up for use across a large network. The work here was spawned by the legendary J. C. R. Licklider, who had purchased the first DEC PDP-1 as vice president of Bolt Beranek and Newman, Inc (BBN). It was this same PDP-1 on which Licklider’s team would demonstrate time sharing: the act of slicing up computer processing time for distribution amongst multiple users.

Licklider went on to take a position at DARPA, first as head of the Information Processing Techniques Office, and then as the director of Behavioral Science Command and Control Research. It was in this capacity that he released a memo in 1963 detailing the difficulties associated with designing a network of time-sharing systems. The software of the day was just not up to the challenge, but that memo laid out a vision for what would become ARPAnet, the precursor of the internet.

The following year, work began on the Multics operating system, the most important OS you’ve never heard of. Multics began to fall apart, somewhat in 1969 when Bell Labs pulled out of the project, leaving it in the hands of GE, which then sold the whole shebang off to Honeywell. Honeywell continued to make Multics machines for the next three decades.

Multics pioneered the concept of a single-level store for data access, meaning the operating system itself handled all the writing and reading of files, and the process just used simple CPU instructions. Multics also supported dynamic linking and shared libraries.

Naturally, you’re thinking that the name “Multics” sounds vaguely familiar. And that’s because when Bell Labs pulled out of the project, it was due to the fact that the company was already building UNIX, internally.

But UNIX wasn’t just UNIX. UNIX was also the C programming language. At the time, building an operating system was part and parcel with creating a new programming environment and language.

Into this world, Thacker was cast with his freshly minted physics degree. And it was a competitive world, indeed. Licklider’s team at the Massachusetts Institute of Technology had produced the Compatible Time-Sharing System, Dartmouth College had its own time-sharing system, and the University of Manchester had produced the Atlas Supervisor.

By the time Thacker arrived in 1968, the Berkeley Time-Sharing System was already in version 2.0 and was shipping with the Scientific Data Systems 940, a variant of the more common SDS 930. The 940 had a 24-bit CPU made mostly of integrated circuits and was the first SDS machine to natively support a time-sharing system.

Because the SDS 940 had basically come to be due to the work at Berkeley, and despite the skepticism of SDS’ upper management, Thacker and others on the Berkeley Time-Sharing System team saw that there was an opportunity to start a company, here. They formed the Berkeley Computer Corporation: Thacker and Ed McCreight were in charge of designing the hardware, while Butler Lampson and Peter Deutsch would handle the software.

The BCC was not a successful company. The single BCC-500 the company produced ended up at the University of Hawaii, where it formed the backbone of its Aloha time-sharing system. This manual explains some of the details behind this dual-CPU, multiprocessor machine. It was quirky, inspired by the Burroughs B-5000 architecture, and Multics.

Despite its failure, the Berkeley Computer Corporation went on to some lofty achievements, although those were accomplished under a different banner. In what could be considered the ultimate in cross-Bay collaboration, Xerox PARC snatched up the BCC founders and employed them to head up the development of a new computer system; a personal computer system.

Thacker would go on to become the head of the Xerox Alto project, after the BCC team formed the core of the Computer Systems Laboratory at PARC. Alto was considered by many to be a prototype of the first personal computer.

When he began working at Xerox PARC, all of the pieces needed to assemble the most revolutionary personal computer ever conceived were there. Indeed, the Imlac PDS-1 was already the first personal computer in 1972. While PARC was definitely the progenitor of many modern computing paradigms, a great many of those “inventions” already existed when PARC was formed. None of them, however, were particularly well implemented or marketed.

While PARC didn’t exactly make Xerox into the biggest computer company in the world, the repercussions of what was built there are still with us today. Thacker and his team invented, for example, Ethernet, which remains in use today. They were also the folks who invented the laser printer, the WYSIWIG text editor, and eventually, Postscript.

Thacker’s work made those systems usable, understandable, and most importantly: reality. Thacker was an incredible hardware engineer who was able to take difficult computing concepts and actually implement them in a replicable fashion.

Thacker would go on to found the DEC Systems Research Center with others from the PARC Computer Science Laboratory. While there, the team was able to start a lot of its primary projects over. In particular, the team at PARC had been building Mesa, an Algol-like language built just for the Xerox Alto. Once again, the PARC team had built a language and an operating system.

By the time they got to DEC, that idea had fallen out of favor, and the team set to work on making Modula-2, a fresh start. Indeed, some things never change in computing: a chance to start over is always a great way to fix the mistakes that accumulated in a past project.

Said Lampson, in an interview, “When we left PARC and went to DEC we were able to cast off all the legacy trappings of Mesa and start over. We said we don’t want to spend five years designing and implementing a programming language. What can we do; Modula was a very comfortable place for us to start because, first of all, it’s not very complex, and secondly, it has all this heritage that we were familiar with. So we asked ourselves what are the things we could add; what do we see as the current needs for a serious programming language?”

Eventually, Thacker ended up at Microsoft Research in 1997, where he designed the hardware for Microsoft’s Tablet PC. Despite being incredibly early to that party, Thacker was no stranger to the idea of a portable, screen-interface-focused computer. He’d already seen and worked on such an idea at PARC: Alan Kay‘s concept computer known as the Dynabook. And he’d already attempted to build the thing at DEC under the codename Lectrice.

While many other influential developers and designers are able to lay claim to innovative technologies and ideas, a great many of them are also pioneers who got scalped: Even the most charitable assessment of the work at Xerox PARC has to admit that the innovations designed there were fully monetized elsewhere.

But that ignores the incredible difficulty in bringing a new technology to market and doing it before anyone else. That’s something that Chuck Thacker was able to do in spades. While his work wasn’t as flashy or well known as some of his contemporaries, without it, it’s doubtful that many of the innovations we take for granted today would ever have made it out of the lab without Thacker there to make them practical.

Feature image of Charles Thacker by Marcin Wichary via a cc 2.0 license.

A 20 year veteran technology journalist, Alex Handy cut his teeth covering the launch of the first iMac. His work has appeared in Wired, the Atlanta Journal Constitution, and The Austin American Statesman. He is also the founder and director...
Read more from Alex Handy
SHARE THIS STORY
RELATED STORIES
Data, Analytics and AI: What Will Happen in 2023 I Need to Talk to You about Kubernetes GitOps Kubernetes App Deployment from the Command Line Entrepreneurship for Engineers: Building for Customers’ Love Agent-Based vs. Agentless Security: Which Approach Is Better?
SHARE THIS STORY
RELATED STORIES
What Trouble Awaits Cloud Native Security in 2023? Swarm, a User-Friendly Alternative to Kubernetes I Need to Talk to You about Kubernetes GitOps 5 Best Practices for DevSecOps Teams to Ensure Compliance What TNS Readers Want in 2023: More DevOps, API Coverage
THE NEW STACK UPDATE A newsletter digest of the week’s most important stories & analyses.
The New stack does not sell your information or share it with unaffiliated third parties. By continuing, you agree to our Terms of Use and Privacy Policy.