A tutorial on using Podman as drop-in replacement for Docker.
Jan 6th, 2020 12:46pm by Jack Wallen 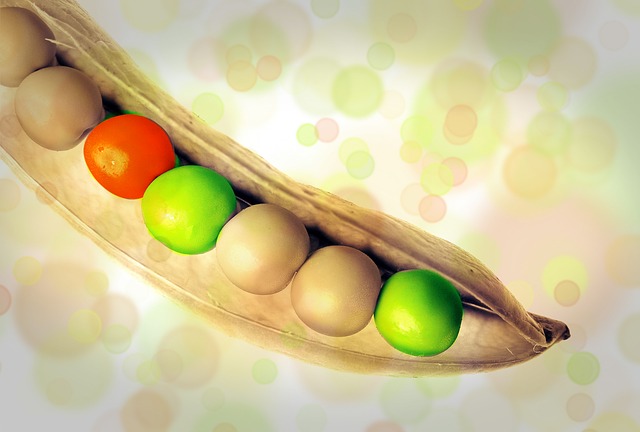 Did you know that both Red Hat Enterprise Linux 8 and CentOS 8 have dropped official support for the Docker container runtime engine? Yes, it’s true. Because of this, you have two choices:

Although you can install the community edition of the Docker engine, there’s an issue with containerd.io that will keep you on your toes. That may be okay with you, but other admins would prefer using an officially supported tool, which won’t require the constant hassle that can accompany such an installation.

Podman is a new, open source, container engine that works seamlessly with containers as well as pods (groups of containers deployed together on the same host). Podman is a unique take on the container engine, as it doesn’t actually depend on a daemon, but instead launches containers and pods as child processes. Podman is the CLI tool for interacting with libpod, a library that allows other tools to manage pods and containers. Anyone that has used the Docker CLI will feel immediately at home with Podman, so migration to from Docker to Podman should be seamless.

I want to walk you through the process of installing and using Podman. I’ll be demonstrating on CentOS 8.

Other than having a working knowledge of the Docker CLI and containers in general, you’ll need to have:

A Word of Warning

Podman is under heavy development. One issue you must know about is that, at the moment, certain Podman commands must be run as root. One example is when using port bindings. Say you want to bind external port 80 to internal port 8080 (with -p 80:8080). In order to do that, the container deploy command must be run with sudo.

Because Podman doesn’t use a daemon, it’s hard to say if this should be a security risk or not. However, my guess is the developers will be adding the ability to use port bindings without sudo in coming releases.

And now, on to the installation.

There are two routes to take for the installation of Podman. You can either install only Podman with the command:

Or you can install the entire container tools suite (of which Podman is included) with the command:

And that’s all there is to the installation of podman.

Let’s dive right into using Podman. If you’ve used the Docker CLI, much of what Podman has to offer will be quite familiar.

For example, in order to pull the official NGINX image you’d issue the command:

First, Podman will check registry.redhat.io for the latest version of the NGINX image. It won’t find it there, so it will move on to docker.io (where it will locate the image in question). Once the image has been pulled, you can make sure it’s there by viewing all of your downloaded images with the command:

You should see the newly-pulled image listed with its tag, image ID, the day it was created, and size (Figure 1). 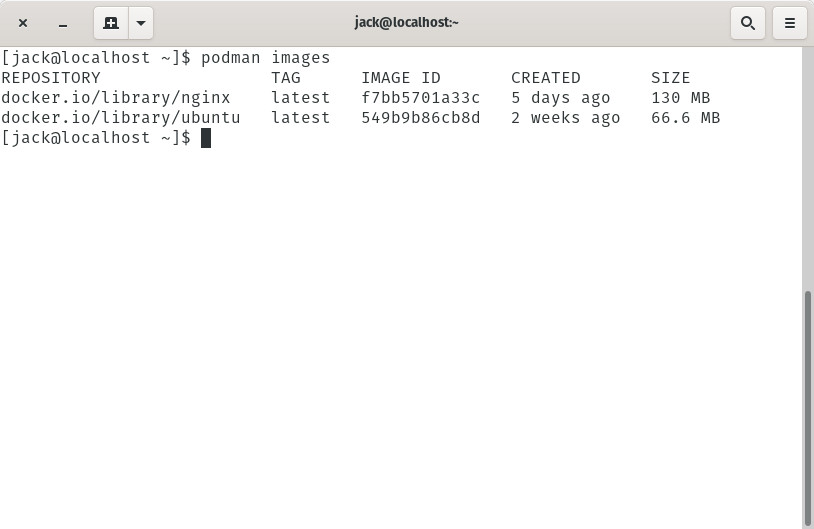 Figure 1: The NGINX image has successfully been pulled.

To delete an image, issue the command:

Where ID is the first four or five characters of the image ID.

Now let’s deploy a simple container. We’ll pull the official Debian image and then have it use it’s internal echo command to print out the message, “Hello, New Stack!” The deployment command for this would be:

The official Debian image will be pulled and our message printed (Figure 2). 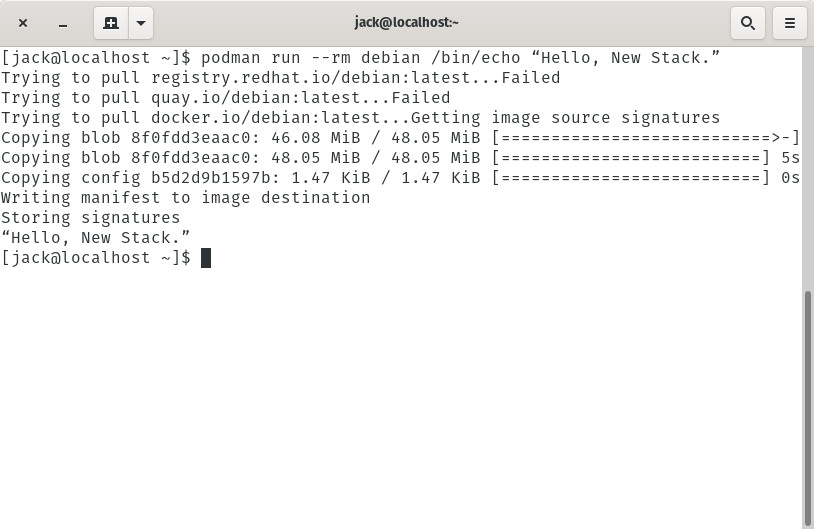 Figure 2: Our simple container has run.

You can now check to see what containers are running with the command:

Of course, the container we deployed wasn’t run in detached mode, so it ended almost as soon as it started. Let’s run a more complicated container. This time we’ll deploy a basic web server with the command:

Notice we had to employ sudo. This is because we are mapping external port 8081 to internal port 80. The container will deploy. You can see it running (Figure 3) with the command:

Figure 3: Our container is listed as running.

To stop that container, we’d issue the command:

Where ID is the first four or five characters of the container ID.

Finally, to remove the container, we issue the command:

Where ID is the first four or five characters of the container ID.

Let’s deploy a container that includes a webserver we can access. We’ll use the official NGINX image and deploy it with the command:

Once the container is deployed, locate it’s IP address with the command: 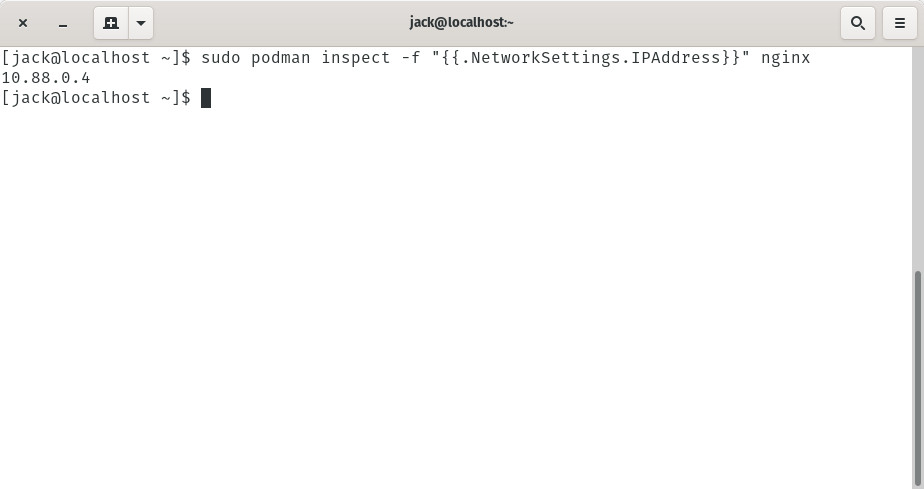 Let’s access the containers bash shell with the command:

You should now see a prompt (by way of the # character). Install the w3m text-based browser with the commands:

Once w3m is installed, make sure the NGINX server is serving up content with the command:

Where IP is the IP address of the running container. You should see the NGINX greeting (Figure 5). 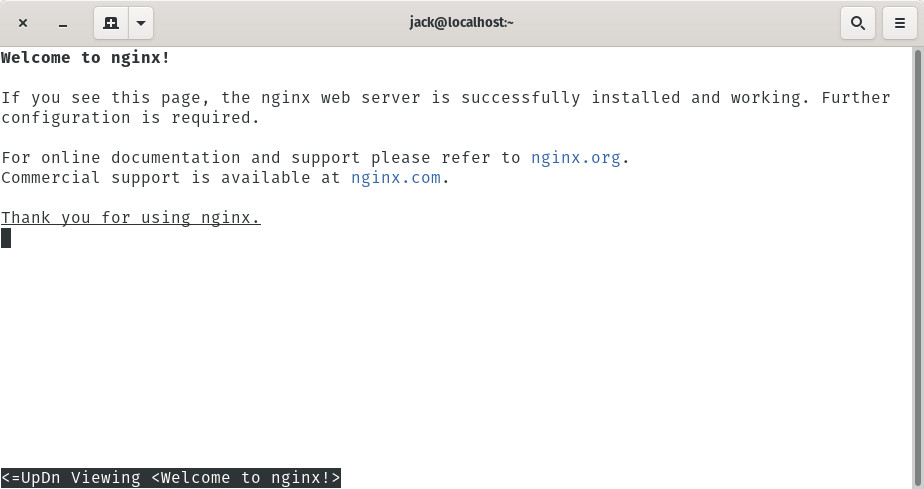 And that’s the basics of installing and using Podman. There is, of course, much more to it, so we’ll dive back into more use cases later on. Happy podding!

SHARE THIS STORY
RELATED STORIES
The Next Evolution of Virtualization Infrastructure How to Deploy Containers with nerdctl .NET 7 Simplifies Route from Code to Cloud for Developers How to Implement a Security Scanner for Docker Images Can Observability Platforms Prevail over Legacy APM?
Red Hat is a sponsor of The New Stack.
TNS owner Insight Partners is an investor in: Docker.
SHARE THIS STORY
RELATED STORIES
Connect to Remote Docker Machines with Docker Context WebAssembly vs. Kubernetes 3 Container Practices to Boost Your Security Posture Kubernetes Needs to Take a Lesson from Portainer on Ease-of-Use Can Observability Platforms Prevail over Legacy APM?
THE NEW STACK UPDATE A newsletter digest of the week’s most important stories & analyses.
The New stack does not sell your information or share it with unaffiliated third parties. By continuing, you agree to our Terms of Use and Privacy Policy.