China Joins the Search for Extraterrestrials 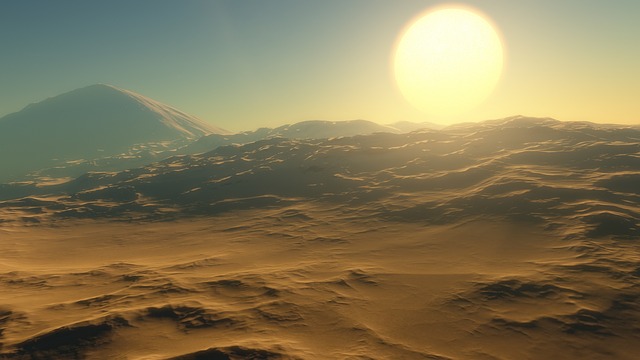 China unveiled the world’s most powerful radio telescope in 2016, with the hope that it could find evidence for life on other planets, noted a new article in the Atlantic, “What Happens If China Makes First Contact?”

The facility’s chief scientist has pointed out proudly that “We look for not only television signals but also atomic bomb signals. We’ll give full play to our imaginations when processing the signals… as we don’t know what an alien is like.”

China’s Five-hundred-meter Aperture Spherical radio Telescope (or FAST) will also be able to hear aircraft-radar waves, according to the Atlantic, or another “fading artifact of a civilization’s first blush with radio technology” in its ongoing search of “tens of thousands” of star systems.

The Atlantic describes the telescope, nestled in the Karst mountains, as “a radical expansion of the human search for the cosmic other.” The site’s senior science and technology editor ponders the massive human construct that would listen for aliens: “Five football fields wide, and deep enough to hold two bowls of rice for every human being on the planet, it was a genuine instance of the technological sublime.” 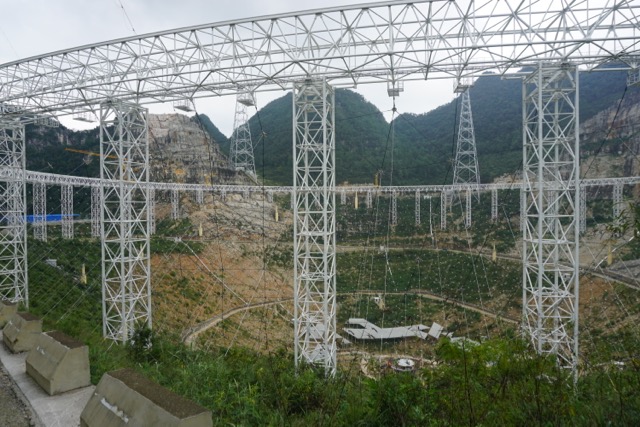 Of course, China isn’t the only country involved in the hunt for alien life. The article cites a growing number of radio observatories that will cooperate on research, including new space observatories in Australia, New Zealand, and South Africa. Russian billionaire Yuri Milner also invested $100 million in a new program in 2015. The article suggests that through this ongoing effort, “we may come to know a new metaphysics,” as it reaches its grand conclusion. “We may be humbled to one day find ourselves joined, across the distance of stars, to a more ancient web of minds, fellow travelers in the long journey of time.”

The Atlantic piece argues that researchers from SETI Institute, an organization entirely dedicated to searching for life elsewhere in the universe, have taken the search to the next level, becoming “philosophers of the future.”

They have tried to imagine what technologies an advanced civilization might use, and what imprints those technologies would make on the observable universe. They have figured out how to spot the chemical traces of artificial pollutants from afar. They know how to scan dense star fields for giant structures designed to shield planets from a supernova’s shock waves.

The SETI Institute also has a whole page dedicated to “the Fermi Paradox,” named after the nuclear physicist “best remembered for building a working atomic reactor in a squash court.” Given the age of the universe — ample time for leaving some sign of existence — Fermi had asked the question: where is everybody? Why are there no signs, anywhere, of alien lifeforms, given this vast universe, and a vast scale of time?

Counter-arguments have been proposed — for example, that “early extinction could be the cosmic default for life in the universe” because the earliest habitable conditions for any planet also tend to be unstable. Another theory says we’re just too early in the dawn of the universe to see other advanced civilizations. Others argue we’re too late — that advanced civilizations invariably extinguish themselves. Or maybe the relics that aliens left behind are the laws of physics embedded in our reality.

There’s even been some discussion of a “postbiological artificial intelligence that had taken control of its planet.” (The Atlantic argues that “Maybe the self-replicating machinery required to spread rapidly across 100 billion stars would be doomed by runaway coding errors.”) And this is where theories become indistinguishable from science fiction.

It might have transformed its entire planet into a supercomputer, and, according to a trio of Oxford researchers, it might find the current cosmos too warm for truly long-term, energy-efficient computing. It might cloak itself from observation, and power down into a dreamless sleep lasting hundreds of millions of years, until such time when the universe has expanded and cooled to a temperature that allows for many more epochs of computing.

Famed Chinese science fiction writer Liu Cixin shares a similar theory with The Atlantic: that the absence of signals just means extraterrestrial civilizations are really good at hiding. An older civilization would, after all these years, surely know by now the risks of making contact. Cixin believes that no alien civilization would ever send a beacon — unless it was a “death monument” announcing their civilization’s impending extinction.

Can we even be sure we’d recognize signals from a civilization that’s had billions of more years to evolve?

And yet, we search…

So what happens if these researchers actually do hear something? First, there’s the prosaic answer. “International protocols require the disclosure of first contact,” reports The Atlantic. But then there’s an important caveat: these protocols “are nonbinding.”

Maybe China would go public with the signal but withhold its star of origin, lest a fringe group send Earth’s first response. Maybe China would make the signal a state secret. Even then, one of its international partners could go rogue. Or maybe one of China’s own scientists would convert the signal into light pulses and send it out beyond the great firewall, to fly freely around the messy snarl of fiber-optic cables that spans our planet.

But beyond that, there’s already a surprising amount of serious consideration being given to the inevitable follow-up question: if aliens do contact us, how should we reply? Science fiction writer Cixin advises humankind not to detail our own history to the aliens, because “It’s very dark. It might make us appear more threatening.” The Atlantic editor counters that aliens may already have spotted the flash of our atomic weapons, adding “The decision about whether to reveal our history might not be ours to make.”

But some of the great minds of astronomy are also weighing in.

Stephen Hawking has also said if we do hear an alien signal, we should be wary of answering back at all. The Atlantic’s author remembers a lesson from the novel Blindsight by Peter Watts — that “mere reference to the individual self is enough to get us profiled as an existential threat.” And Hawking has argued that aliens could be “vastly more powerful and may not see us as any more valuable than we see bacteria.”

The Atlantic’s editor held on to his optimism. “No civilization could last tens of millions of years without learning to live in peace internally. Human beings have already created weapons that put our entire species at risk; an advanced civilization’s weapons would likely far outstrip ours.” And this leads to a second even more speculative conclusion. “Anyone we make contact with will almost certainly be older, and perhaps wiser.”

And one SETI astronomer argues that Hawking is wrong, simply because aliens have already had half a century to pick up our TV and radio signals as they leak into outer space. “If you really think there’s a potential of killing 7 billion people because the aliens get ticked off by hearing ‘I Love Lucy’ and send their interstellar battlewagons here to wipe us out, just in a fit of pique… If you really think that, then you better turn off all radars — not for the weekend, not for this year, you better turn them off forever.”

And then there’s Douglas Vakoch, the president of Messaging Extraterrestrial Intelligence (METI), a nonprofit group which has splintered off from SETI and is already transmitting intentional signals to nearby stars. The first message, sent in October, was a series of pulses meant to show the aliens something about music on earth, co-created with the Spanish Sónar music festival. The group plans to follow it up with more transmissions next April.

And both Voyager probes carry a gold-plated copper disk containing a collection of earth culture that was curated in 1977 by Carl Sagan. (It includes 115 images, recordings of natural sounds like the ocean, wind, birds, and other animals, as well as spoken greetings in 55 languages, including greetings from the Secretary-General of the UN, Kurt Waldheim. and nearly two dozen music selections.)

On September 5th, NASA even broadcast a new message into space: “We offer friendship across the stars. You are not alone.” It was chosen from more than 30,000 messages submitted online, and NASA created a special video where the message is first read out loud by William Shatner. (He jokingly asks “are the hailing frequencies open?” then playfully calls the Voyager probe — the message’s first recipient — an advance messenger “to all the little green people out there.”)

But in a poignant flourish, NASA also revealed all ten of the finalists — a remarkable collection of the best messages that humanity had wanted to send to the aliens who may live on the other side of outer space. Long after this century has vanished into the past, these messages, they’d hoped, would still be traveling across the cosmos to our fellow lifeforms yet unseen:

When we work together, we can do great things.

We began as wanderers, and we are wanderers still.