China vs. the World: A Kubernetes and Container Perspective 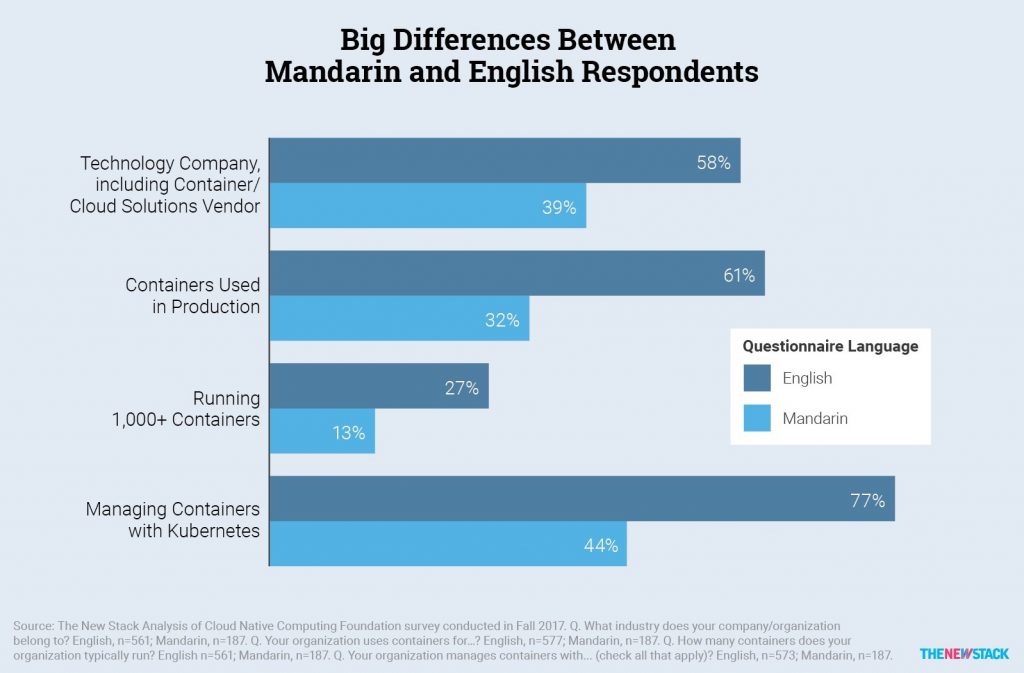 New data released from the Cloud Native Computing Foundation’s Mandarin-translated survey of the cloud-native community show that the respondents from China are, in general, less far along in their deployment of containers and Kubernetes. They are also much more likely to deploy containers to Alibaba Cloud and OpenStack cloud providers, compared to the English survey respondents. The Mandarin respondents were also twice as likely to cite reliability as a challenge.

In the CNCF’s 2017 survey, 764 respondents were recruited directly through outreach to CNCF participants, their social networks and a larger community of cloud-native leaning companies. An English version of the questionnaire was distributed worldwide, garnering 577 responses. In addition, CNCF received an additional 187 responses from a questionnaire that was translated into Mandarin. The CNCF has just published the data for those Mandarin responses and this article provides an independent analysis of the data by The New Stack. 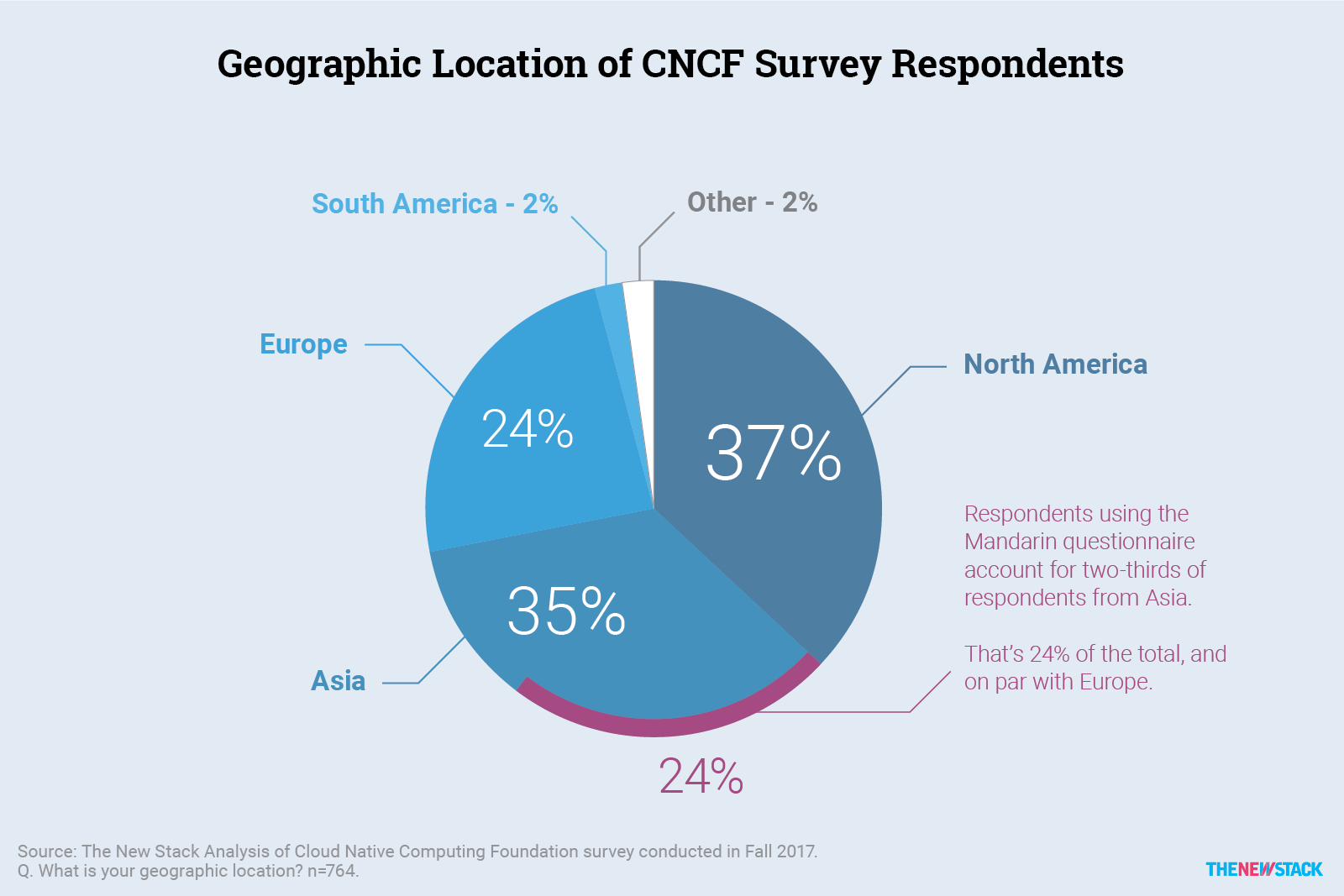 Among Kubernetes adopters, Microsoft Azure outperforms in the Chinese segment, moving ahead of GCP for adoption among the American Big 3 cloud providers. Note that several prominent Chinese cloud providers were not asked about in the survey.

Administering the survey in Mandarin meant that, unlike other surveys, CNCF’s was not dominated by respondents from North America. Respondents from Asia and Europe represented 59 percent of the sample. Due to the survey’s translation into Mandarin, the Asian sample was tilted towards China as opposed to India or Japan. Although the survey questions were identical, the data had to be transformed because of slight variations in how the research instruments were programmed. In addition, the specific responses for “other, please specify” options were not translated from Mandarin to English.

As mentioned in our earlier coverage of the combined survey data, 97 percent of the sample use containers to some degree and 61 percent do so in production environments. That figure drops to 32 percent in production for the Mandarin language respondents.

The New Stack believes that although China’s adoption may be several months behind compared to its Western counterparts, differences also arose for two other reasons. First, the Mandarin sample was much less weighted towards tech companies, with only 39 percent of respondents working in the tech sector compared to 58 percent for the rest of the sample. Second, the English questionnaire may have been completed more by early adopters that have been regularly attending CNCF and Kubernetes conferences. 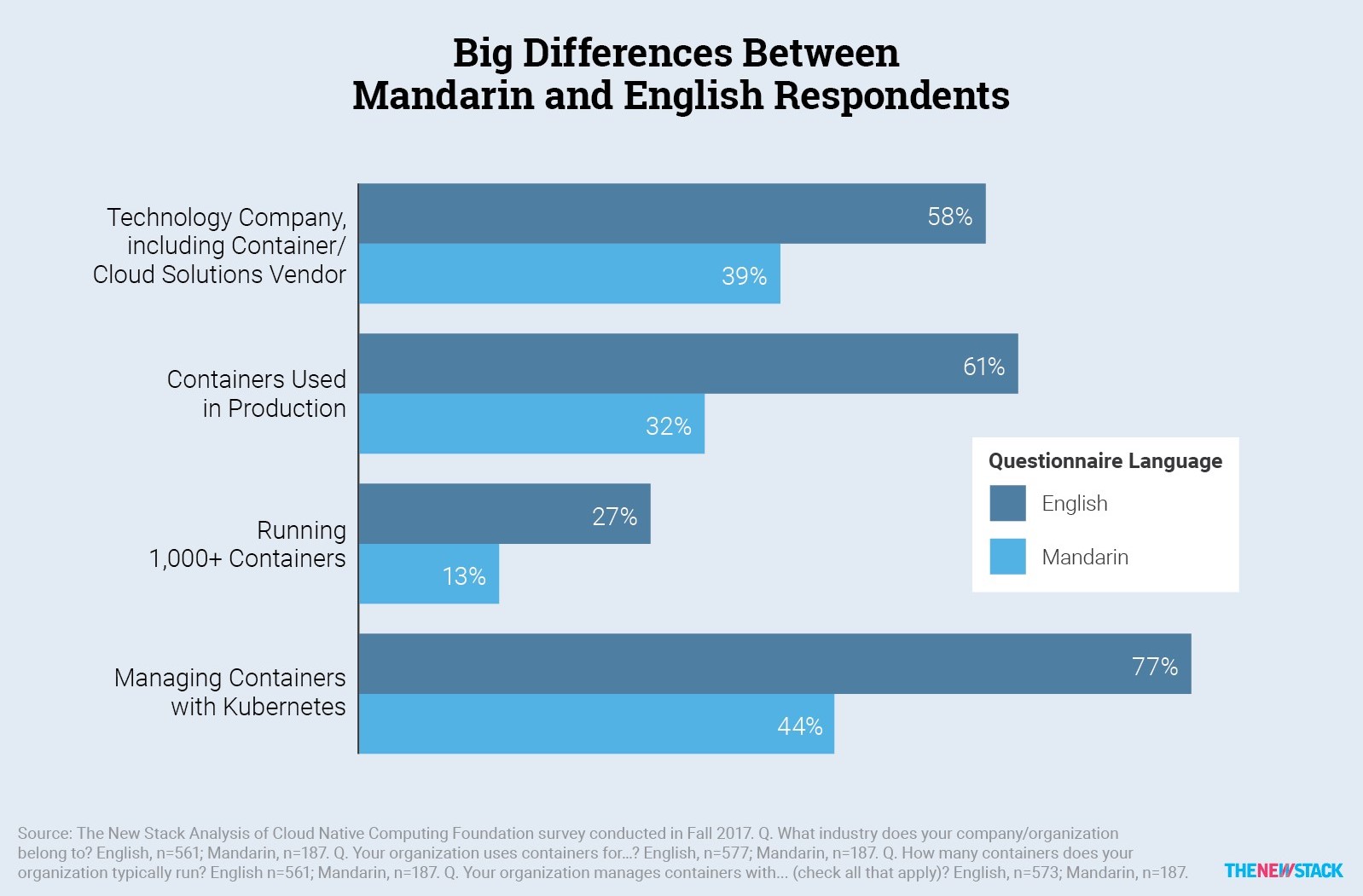 In general, geography does play a part in cloud adoption trends as AWS adoption is stronger in North America and South Asia. This trend is also visible in the CNCF data, but what is even more notable is the variation in the environments based on whether the questionnaire was in Chinese or not. At 46 percent, Alibaba Cloud was by far the leading vendor environment for the Mandarin speakers but only 1 percent of the remaining participants were deploying Kubernetes there.

It is possible that Alibaba promoted the survey to its customer base, thus affecting the results. However, use of other cloud providers was also significantly lower among this group. For example, while AWS was the overall leader among the rest of the world at 63 percent, only 26 percent of Mandarin speakers were deploying Kubernetes there. The drop off was also dramatic for Google Cloud Platform, going from 35 percent to just 7 percent.

Another significant difference is that 44 percent of Mandarin speakers were deploying Kubernetes to OpenStack, while only 19 percent were doing so in the rest of the world. This phenomenon was likely both because OpenStack is more adopted in China and because OpenStack-using vendors may have promoted the survey. 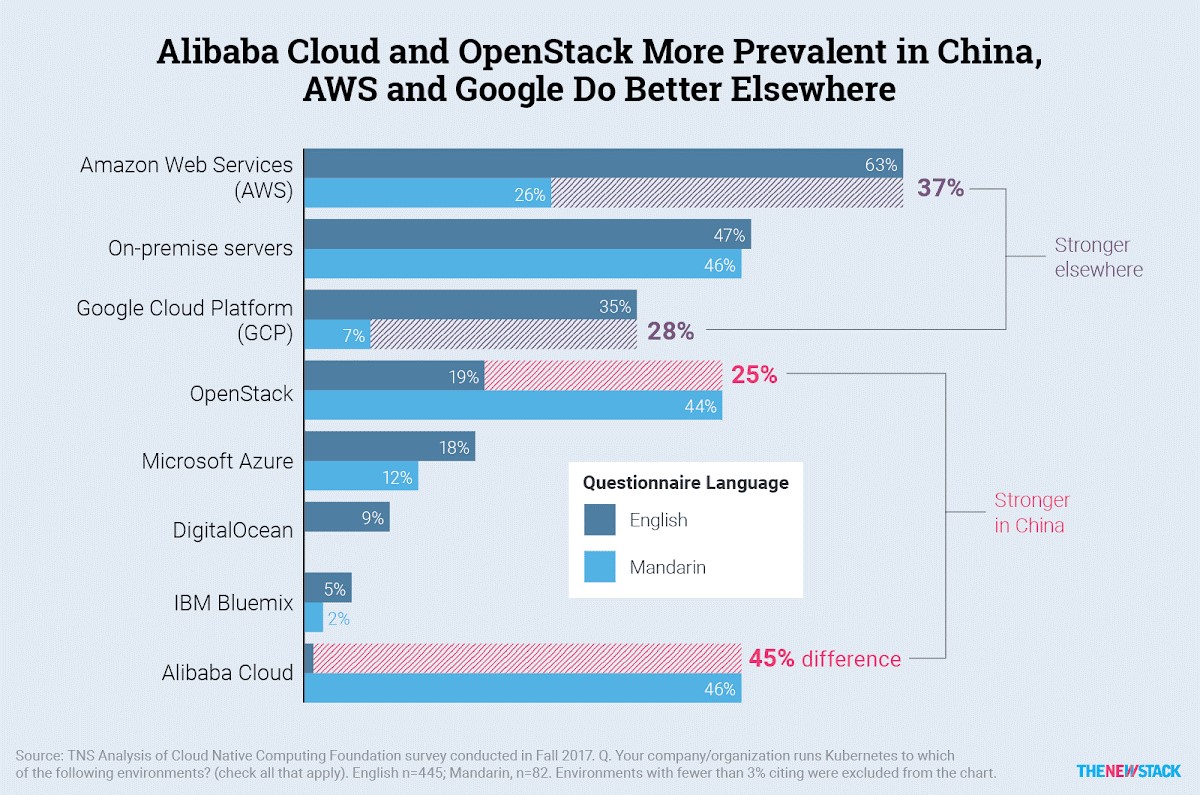 It is noteworthy that 46 percent of Mandarin-speaking respondents are challenged in choosing an orchestration solution, which is 20 percentage points more than the rest of the study. It is likely that these respondents are either early on in their Kubernetes adoption or are still questioning their decision to use it because few of them are as far along in container adoption and maturity. In addition, the Mandarin respondents were twice as likely to cite reliability as a challenge. It is worth further investigation to determine if they are facing specific reliability issues or if perhaps there is a different cultural perception around the subject. 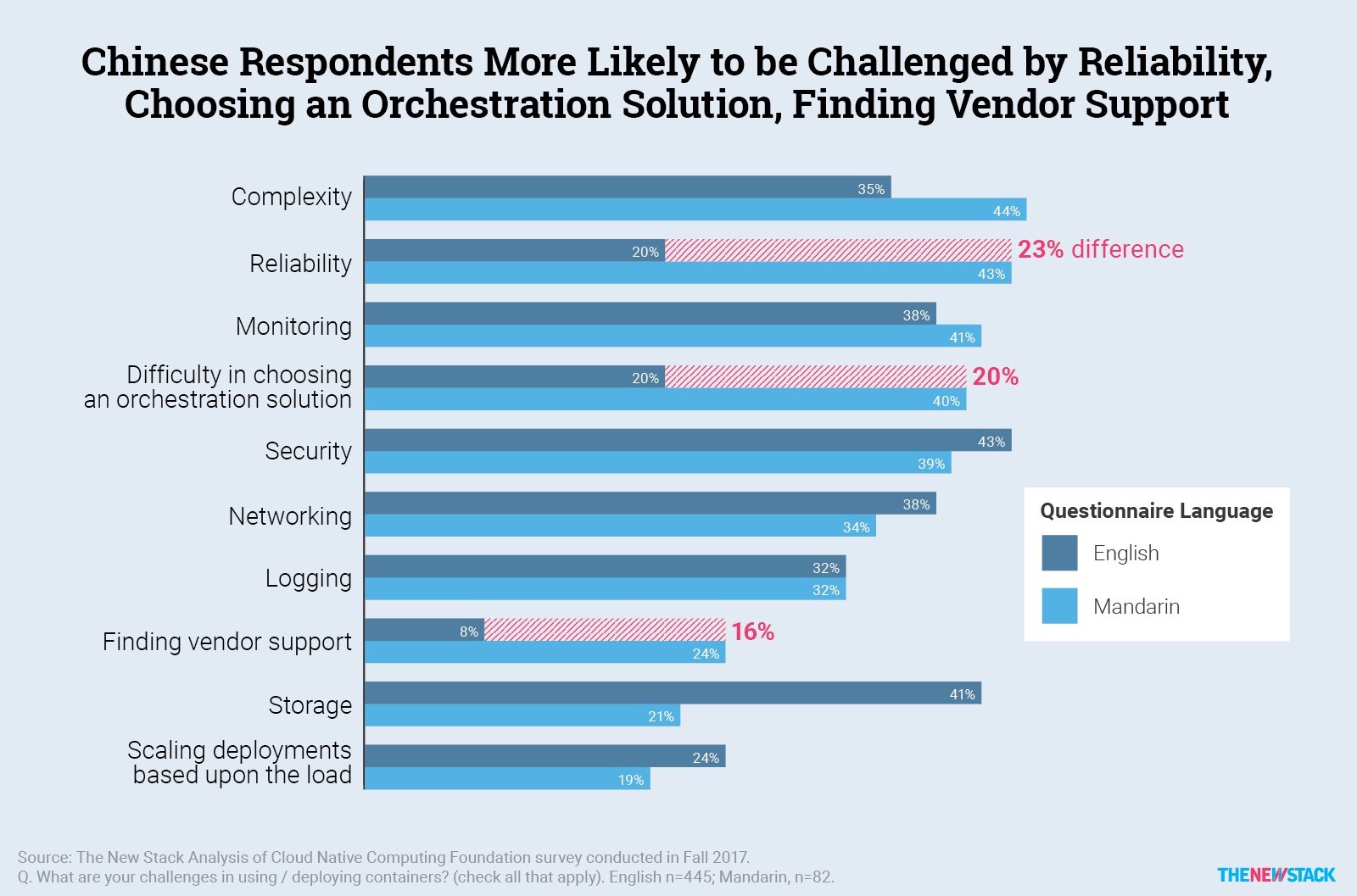 Below are two more charts that show how China technology adoption is different.

For monitoring, Grafana and Prometheus are monitoring tools used much more often among Kubernetes users outside of China. For logging, the Chinese respondents were much more likely to use Fluentd and Graylog. 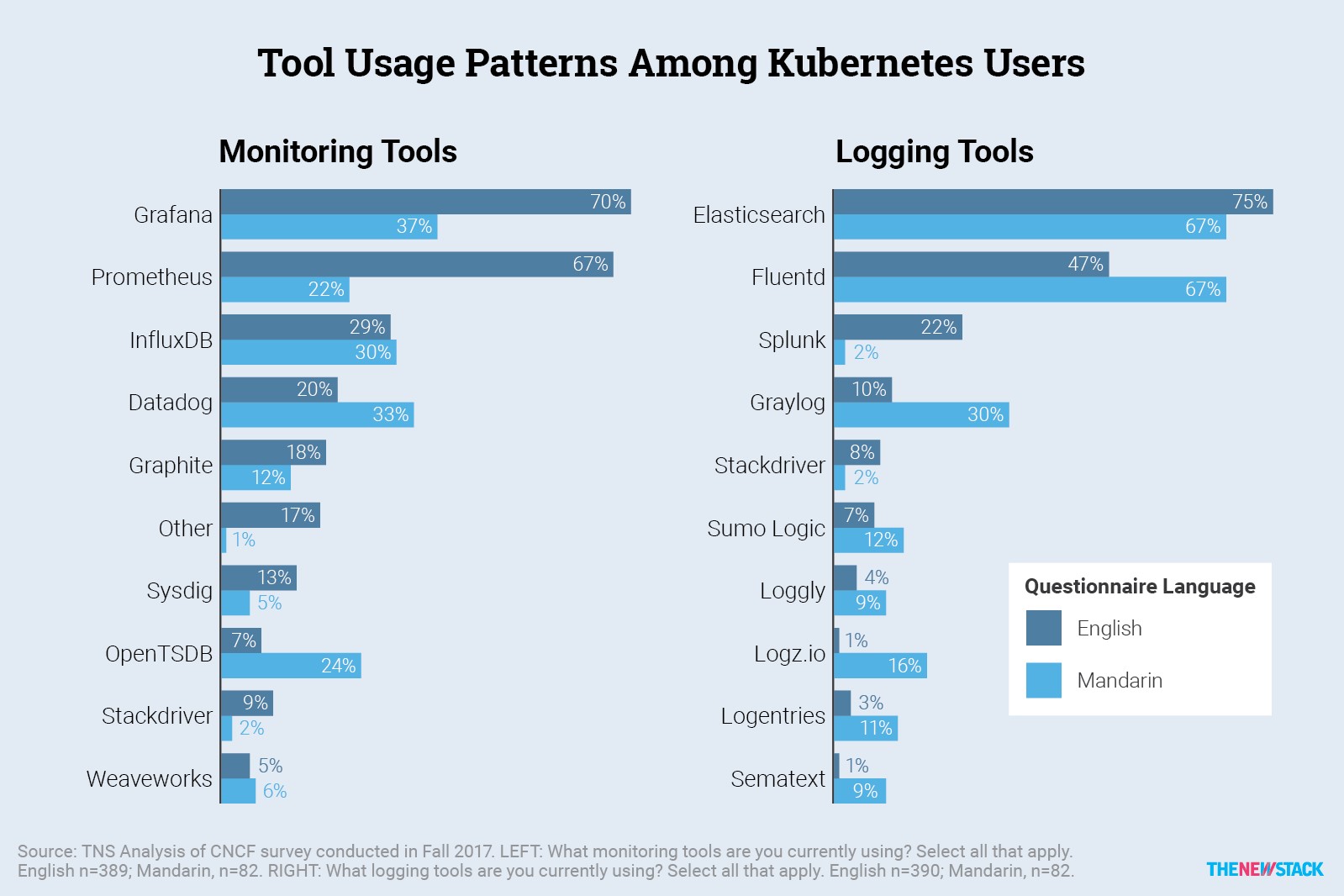 Partly because it is not open source, Splunk is not used as widely in China (2 percent vs 22 percent).

Several networking-related technologies were favored by English language respondents. For network plugin providers, Flannel and Calico underperformed in China, while Kubenet adoption was almost double that of the rest of the study (32 percent vs 14 percent). For Kubernetes ingress, NGINX was used far less in China compared to the rest of the world. 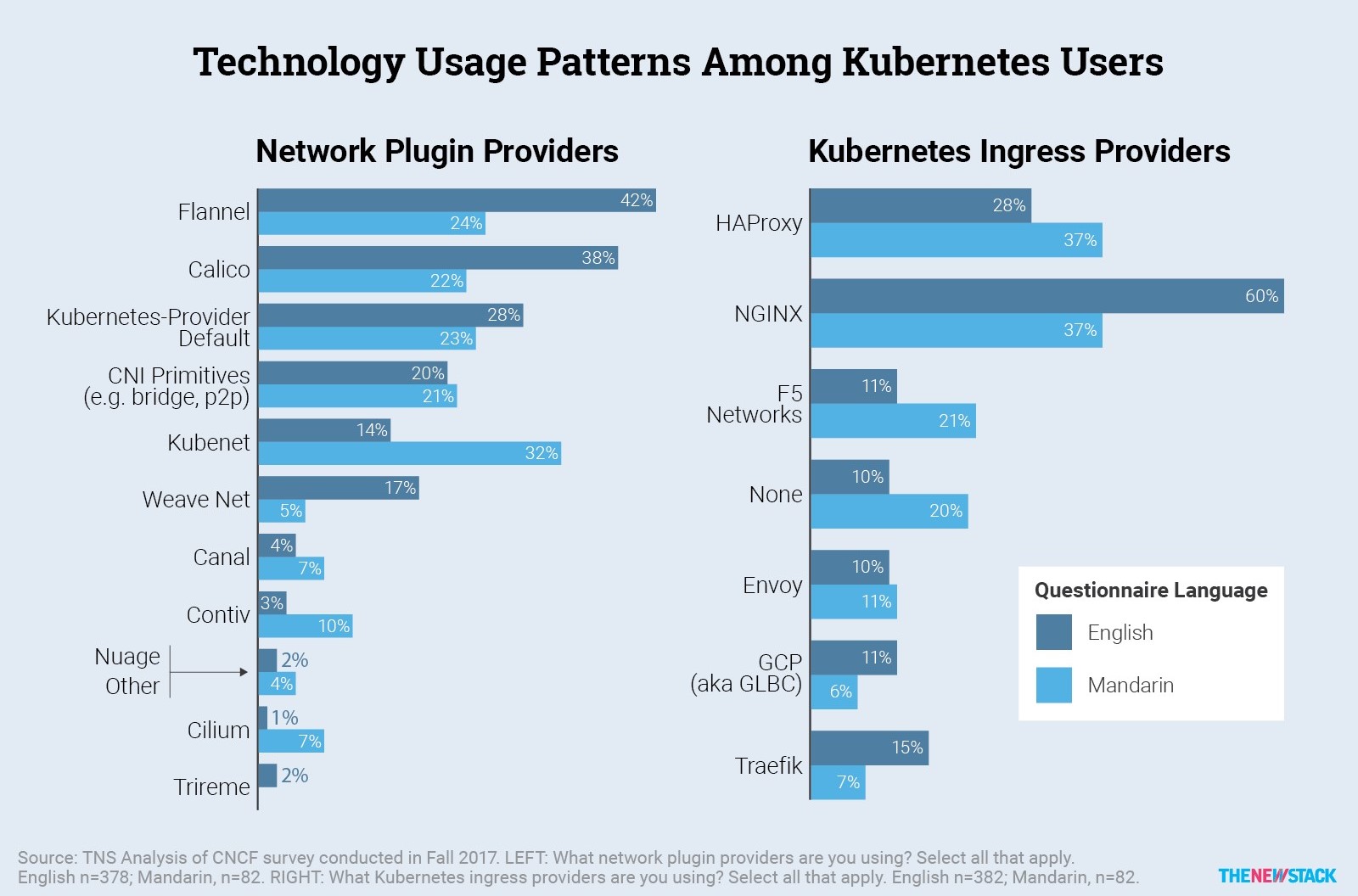 Chinese respondents were less far along their container journey, but are likely to benefit from the trial and error that their Western counterparts have already gone through. Without the uncertainty about who is going to win the container orchestration wars, Chinese companies can focus on the details of implementation. In fact, there are already a wide array of companies helping with running Kubernetes, with Caicloud, DaoCloud, Huawei and Wise2C already in the market as China-based Kubernetes certified services providers. Other Chinese companies with Kubernetes offerings include Alibaba Cloud, Baidu Cloud, Easy Stack, Harmony Cloud, Tencent Cloud, TenxCloud and ZTE. With eight CNCF Meetups in China, we expect that Kubernetes deployment will become more common every day.

Lawrence has generated actionable insights and reports about enterprise IT B2B markets and technology policy issues for almost 25 years. He regularly works with clients to develop and analyze studies about open source ecosystems. In addition to his consulting work,...
Read more from Lawrence E Hecht
SHARE THIS STORY
RELATED STORIES
Why the Castle and Moat Approach to Security Is Obsolete How to Fight Kubernetes Complexity Fatigue What Is Zero Trust Security? Why Access Management Is Step One for Zero Trust Security Intelligent Orchestration: the Key to the Future of DevSecOps
TNS owner Insight Partners is an investor in: The New Stack.
SHARE THIS STORY
RELATED STORIES
What Do Authentication and Authorization Mean in Zero Trust? LogDNA: Observability Enables DevOps Security Teams Need a Higher Appetite for Risk Why Cloud Native Systems Demand a Zero Trust Approach Cloud Native Observability for DevOps Teams: an Introduction
THE NEW STACK UPDATE A newsletter digest of the week’s most important stories & analyses.
The New stack does not sell your information or share it with unaffiliated third parties. By continuing, you agree to our Terms of Use and Privacy Policy.