Chrome Dev Summit: The Web is Closing the Gap on Native Apps

At the Chrome Dev Summit, we got a glimpse into Google’s web priorities and it was clear that Google is expanding the web’s capabilities vs native apps.
Dec 14th, 2020 11:39am by Richard MacManus 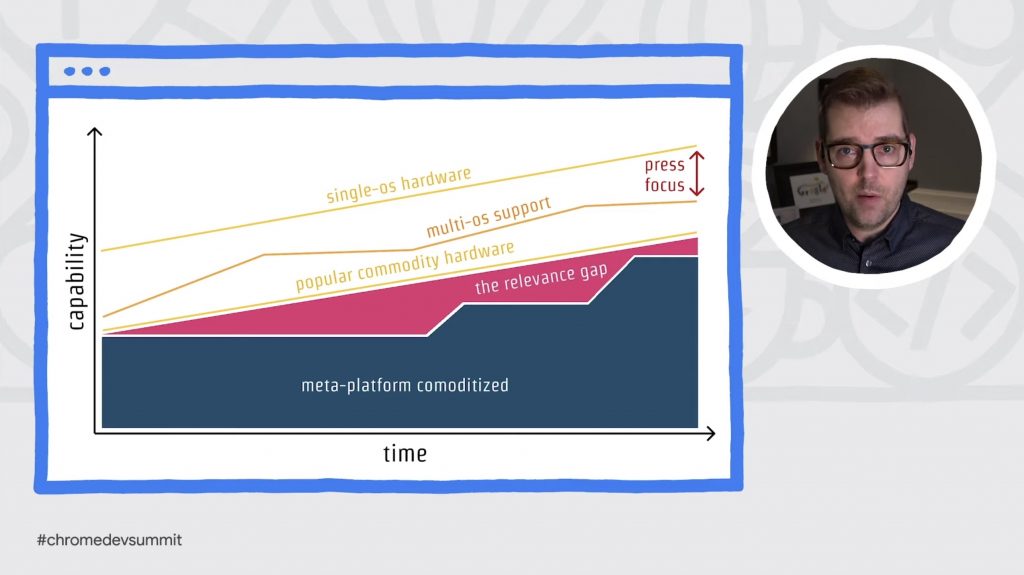 At the two-day Chrome Dev Summit last week, we got a glimpse into Google’s web technology priorities heading into 2021. While much of the event focused on the Chrome browser’s continued improvements to performance, security and privacy — which were positioned as three key pillars — it also became clear that Google is making good progress expanding the web’s capabilities too, particularly with modern cloud apps like Google Meet and Stadia, the continued growth in third-party browser extensions, and the state-of-the-art experiments happening with Progressive Web Apps (PWAs).

Ever since the launch of Apple and Android app stores in 2008, native apps on iOS and Android have siphoned off attention from the web platform. But as Google engineer Alex Russell explained in the final keynote of the Summit on Day 2, the web is a “meta-platform” that is gradually catching up to native apps in capability. So while the “press focus,” according to Russell, has been on native OS apps over the past decade or so — in particular, smartphone apps — the web platform has in fact closed the capability gap in recent years.

To further explain this, Russell first noted that the web has had certain capabilities from its early years: 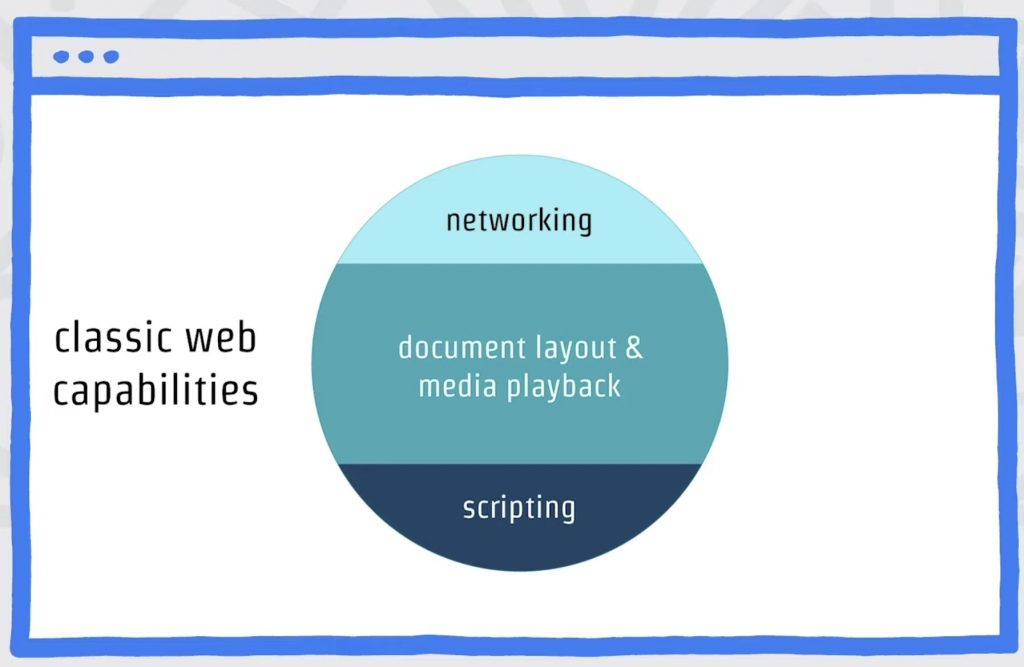 Over the years, the web expanded those capabilities. To illustrate, Russell used the example of video conferencing.

“It wasn’t that long ago that the web’s historic strengths weren’t enough to make video conferencing work well in the browser,” he said. But then, “browsers got good at video [and] next, we learned to talk to cameras and mics and speak low latency networking protocols.”

This innovation over time eventually enabled video conferencing apps like Google Meet to be built in the browser (at least on the desktop). Although it must be said that the most prominent video conferencing app of 2020 — Zoom — has a relatively poor web client that has limited functionality. So the advanced web capabilities that Russell is talking about aren’t necessarily widespread yet, outside of Google’s own services. 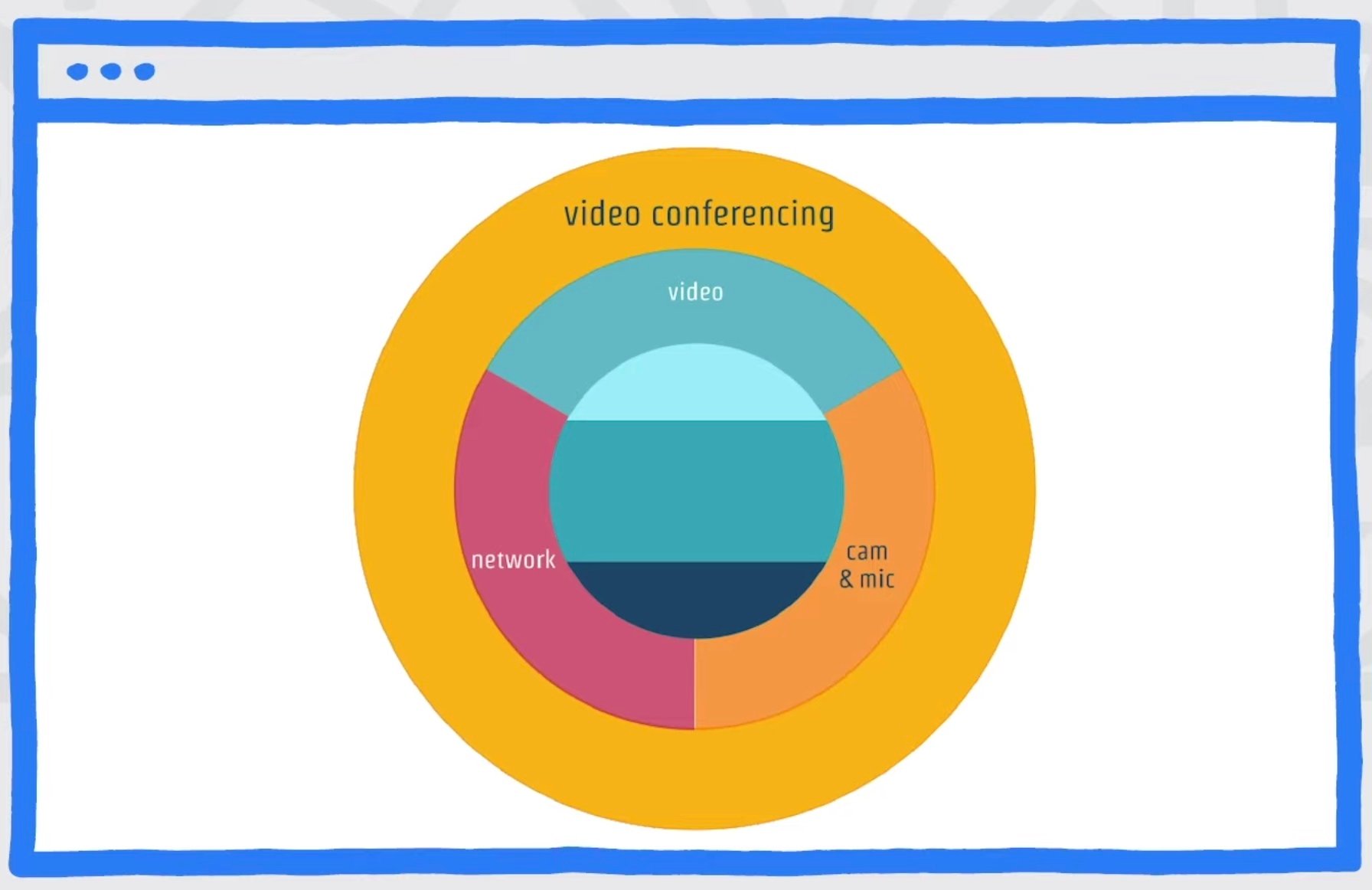 Finally, Russell noted that the technologies that allowed video conferencing and other recent web applications to flourish (for example, productivity apps) are also enabling “a whole new class of applications.” He cited “desktop sharing and streaming games,” with Google’s cloud gaming service Stadia as one example.

The theme of extending the web’s capabilities was also touched on in the opening keynote of the Chrome Dev Summit. In the words of Google Director of Engineering Dion Almaer, the Chrome team is focused on “adding more capabilities to the web, enabling richer and more diverse applications on the platform.”

Almaer highlighted the extensions platform, which received a big update during the event — Manifest V3 for Chrome Extensions “makes extensions more secure, performant, and private-respecting by default” (according to the blog announcement). As 9to5Google noted, “it’s the first major revision to the spec since Manifest V2 launched in 2012.” 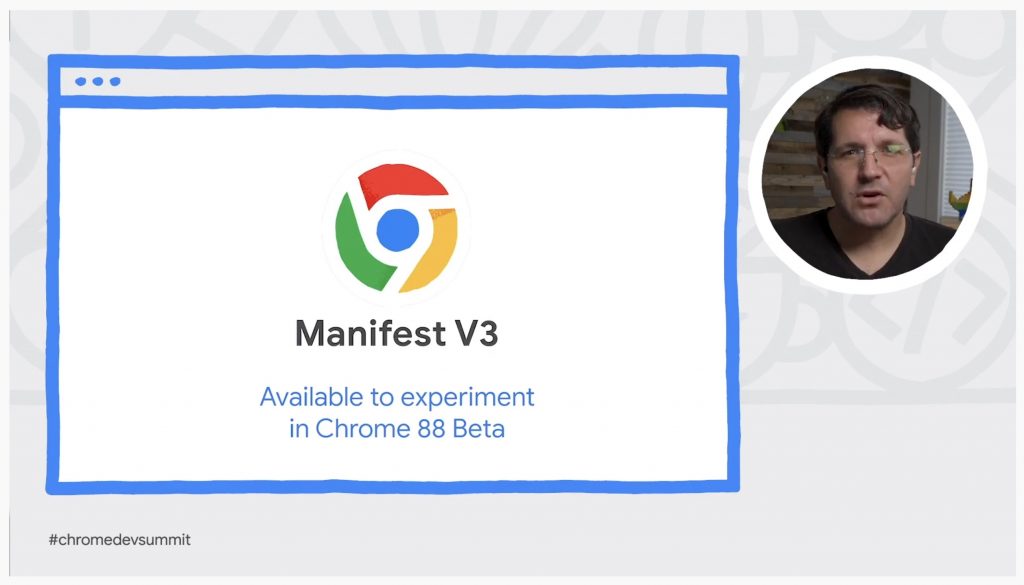 Almaer called extensions “a superpower for the web” and “an aftermarket that allows first and third parties to add rich capabilities that can enhance a site, or the entire experience of the web.” He noted that there are now over 250,000 extensions in the Chrome Web Store and over 200,000 active developers. They’re very popular with Chrome users, too.

“We estimate that users have installed over 20,000 extensions, just in the minutes since this keynote began,” Almaer said.

As a sometime user of a Chromebook, I have to say the availability of extensions for apps I regularly use can be spotty. Evernote has a good Chrome extension, for example, but writing apps I like (such as Bear and Scrivener) do not currently offer extensions.

But 250,000 available extensions is nothing to sneeze at, so it’s positive news for the web that Chrome Extensions is a growing platform.

Progressive Web Apps (PWA) is another way Google is trying to make the web as powerful a platform as Android or iOS. The definition of a PWA is somewhat fuzzy, but Mozilla says it is a “design pattern” and that PWAs are “web apps that use emerging web browser APIs and features along with traditional progressive enhancement strategy to bring a native app-like user experience to cross-platform web applications.” Google goes for a simpler definition: “Websites that took all the right vitamins.”

In a presentation entitled Next-level web apps on desktop, Google Project Manager PJ McLachlan gave a whirlwind tour of the latest PWA developments in Chrome. McLachlan said that PWAs are “on the cusp of another transformational moment,” similar to when AJAX (Asynchronous JavaScript And XML) revolutionized web email in the early 2000s with the launch of Gmail.

McLachlan listed some of the functionality now viable in a web application, which previously had been mostly the domain of native apps: 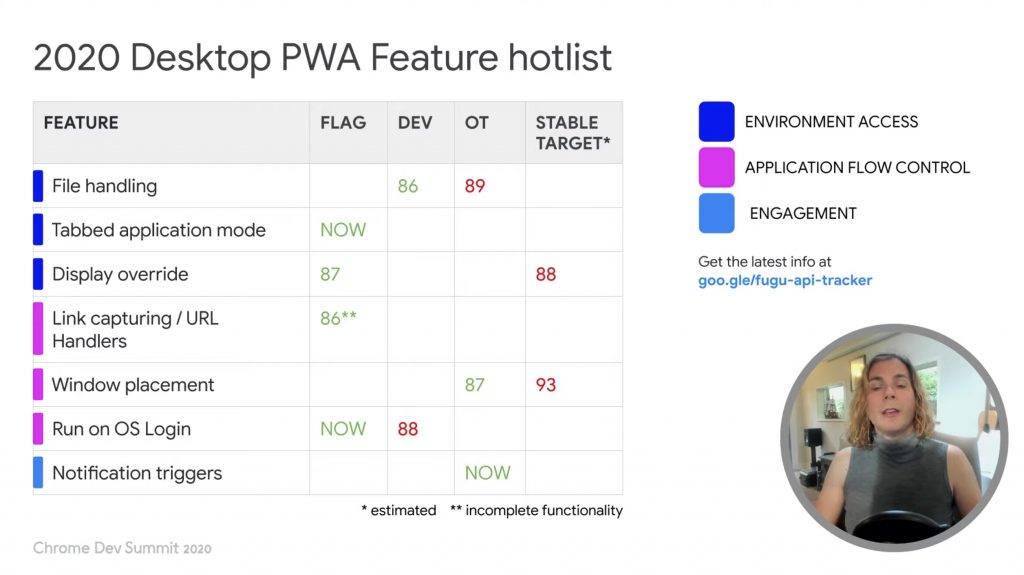 While expanding web capabilities via PWAs and extensions were perhaps the most intriguing things to come out of this year’s Chrome Dev Summit, I was also impressed by the various technical enhancements that have been made in the Chrome environment over the past year. For example, in the keynote it was noted that Gmail saw an approximately 45% improvement in memory management just this year. 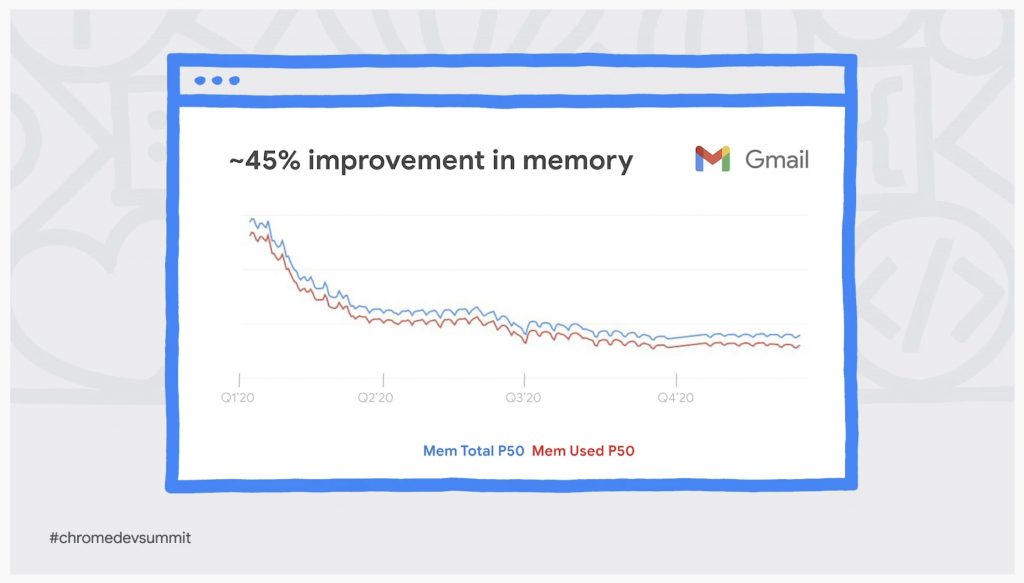 There are also great strides being made in privacy. Ben Galbraith, senior director of product at Google, described in the opening keynote a “a major initiative called the privacy sandbox” that will address the long-running problem of internet platforms and advertisers using cookies to track people across the web. This was actually announced early in 2020, but it was good to see an update on it here in December. 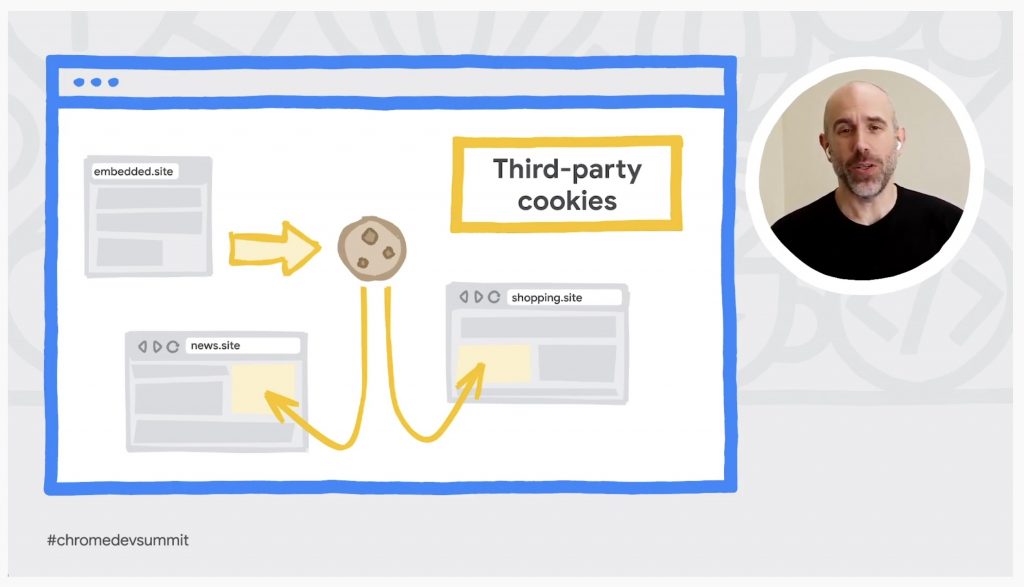 “We’ve made cookies more secure for websites and users today,” he continued. “This year, Chrome finished rolling out a new policy known as ‘same site’, which limits cookies to first-party access by default — requiring developers to declare which cookies can be sent to third party domains.”

What became clear over the two days of Chrome Dev Summit is that the web as a platform is not in stasis: it’s actually expanding quite nicely, thanks in large part to Google’s stewardship via its market-leading Chrome browser. We can also thank continued innovation from Mozilla, Apple and others in the browser market — and indeed Microsoft, whose new Edge browser is also pushing the web forward.

It feels strange to say it in an online world still dominated by smartphone apps and Walled Garden platforms … but, the web is alive and well!

Richard MacManus is a Senior Editor at The New Stack and writes about web and application development trends. Previously he founded ReadWriteWeb in 2003 and built it into one of the world’s most influential technology news sites. From the early...
Read more from Richard MacManus
SHARE THIS STORY
RELATED STORIES
Pro Coders Key to Stopping Citizen Developer Security Breach JavaScript or WebAssembly: Which Is More Energy Efficient and Faster? Prepping for 2023: What's Ahead for Frontend Developers Core Wars Shows the Battle WebAssembly Needs to Win How to Work with Protocols and Get Started with ActivityPub
TNS owner Insight Partners is an investor in: The New Stack.
SHARE THIS STORY
RELATED STORIES
An Inside Look at What GitLab’s Web IDE Offers Developers Why a Twitter Founding Engineer Is Now All-in on Mastodon Angular vs. React: How to Choose the Right Framework for You Anil Dash on Mastodon Joining Fastly’s Open Source Program Google Brings Rust into Chromium Project
THE NEW STACK UPDATE A newsletter digest of the week’s most important stories & analyses.
The New stack does not sell your information or share it with unaffiliated third parties. By continuing, you agree to our Terms of Use and Privacy Policy.