Organizations looking to add a new piece of cloud infrastructure don't believe running workloads at the edge is an essential requirement. Nor is running individual applications across multiple clouds ("multicloud"), according to our recent Infrastrcuture-as-a-Service survey of tech executives.
Nov 12th, 2020 8:00am by Lawrence E Hecht 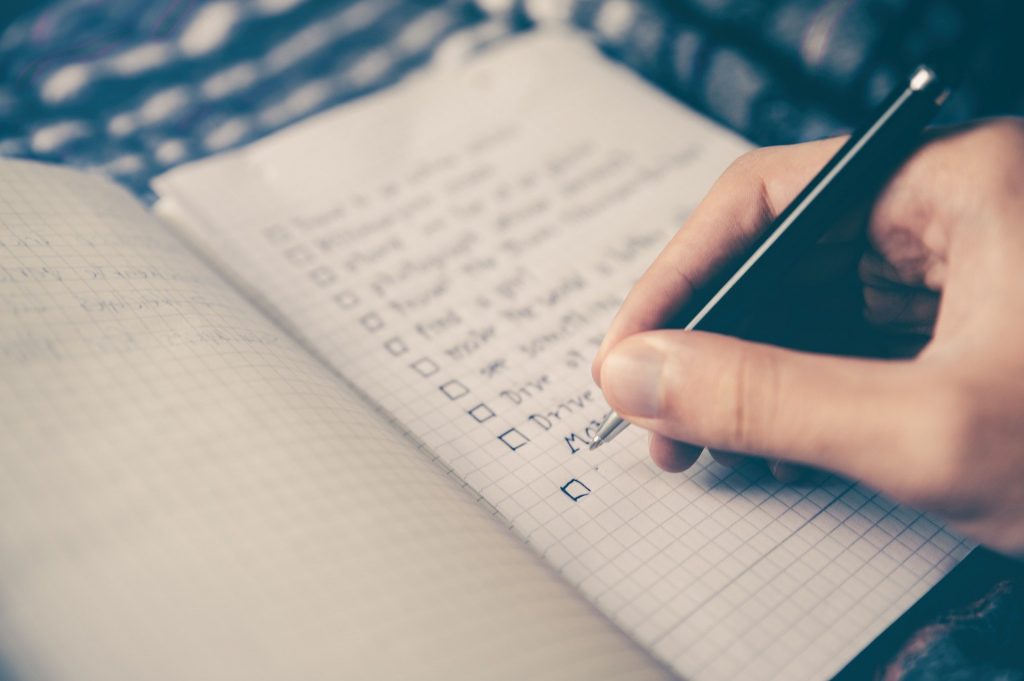 Organizations looking to add a new piece of cloud infrastructure don’t believe running workloads at the edge is an essential requirement. Nor is running individual applications across multiple clouds (“multicloud”).

Instead, security, scalability, cost, and performance are the most essential criteria when assessing net-new cloud infrastructure, according to respondents in The New Stack’s Next Generation Infrastructure-as-a-Service study, which consisted of both a survey and in-depth interviews conducted in August and September 2020. 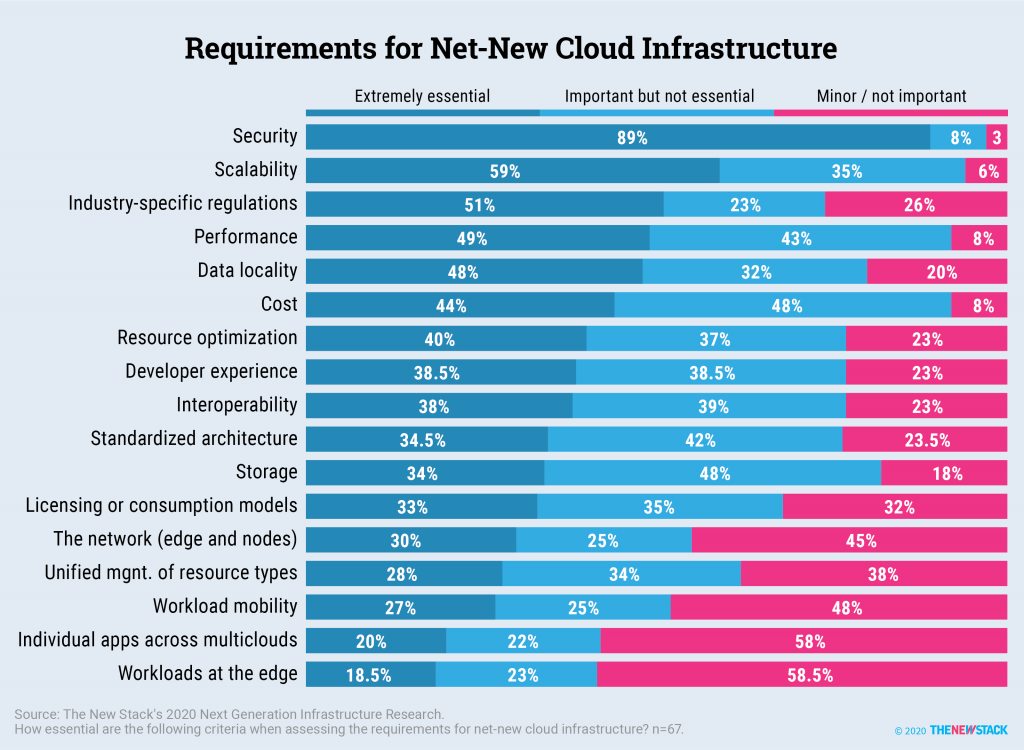 Just like the broader IT community, the people we talked to believe artificial intelligence, data management workloads, and cloud infrastructure are having an impact on long-term IT requirements. However, application development workloads for things like integrated Development Environments (IDEs), continuous integration and deployment (CI/CD) and testing gets mentioned most often in terms of what is affecting IT decision-makers’ organizational plans looking out beyond the next five years.

The respondents best able to discuss their organization’s current and future IT requirements were C-level technology management or cloud architects. These job roles represent more than two-thirds of the 67 respondents that rated the importance of 17 criteria when assessing and selecting cloud infrastructure. Reflecting the fact that actual adoption of edge computing use cases is rather low, 59% believe that running workloads at the edge is either not at all important or at most a minor consideration.

At least based on one definition, multicloud is not important either. Yes, companies are using private and public clouds at the same time, and clouds are regularly operated across multiple datacenters. Even though microservices, serverless, and event-based architecture make them easier to deploy, relatively few individual applications regularly utilize services across multiple clouds at the same time. In fact, when asked about these criteria, 58% don’t consider this to be an important requirement, while only 20% see it as essential. Workload portability is somewhat more important, but still, only 27% say it is essential.

In other words, decision-makers are not particularly worried about portability and migrating workloads from one cloud provider to one another if given enough time.

Compared to running an app across multiple clouds, interoperability is twice as likely to be considered an important or essential requirement. Interoperability also deals with hardware compatibility ensuring that services based on a common open source project can work with each other. Defining how business and developer-related automation processes interoperate with each other also appears to be something that needs to be considered alongside more IT-centric requirements.

The study paid special attention to cloud architects. This group is notably more interested in scalability requirements as compared to other technologists. On the other hand, cloud architects were half as likely to believe that storage, standardized architecture and interoperability are essential when picking new cloud infrastructure as compared to the CTOs and other technology executives decision-makers surveyed. Because of their job role, the people designing and integrating cloud platforms understand that there is little black and white in the world of compatibility. Don’t be surprised when a pre-sales engineer or solutions architect from a cloud provider downplays interoperability issues. There are probably workarounds. At the same time, the people we talk to continue to express interest in common open source projects and standardization efforts that can reduce reliance on any one or two commercial cloud providers. 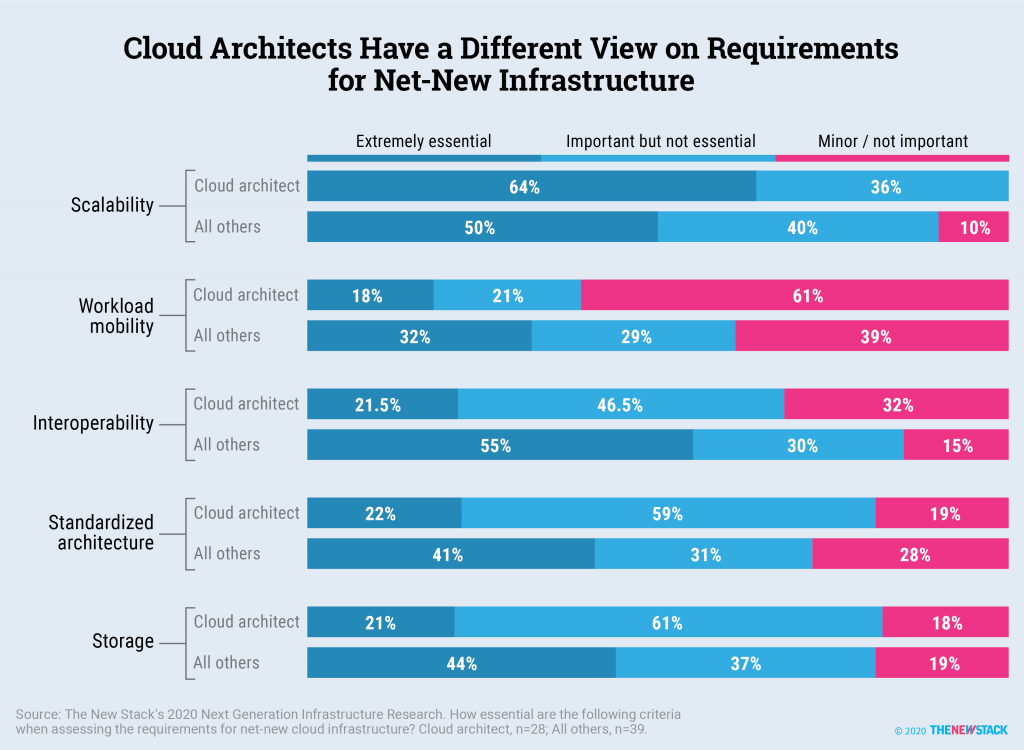 Lawrence has generated actionable insights and reports about enterprise IT B2B markets and technology policy issues for almost 25 years. He regularly works with clients to develop and analyze studies about open source ecosystems. In addition to his consulting work,...
Read more from Lawrence E Hecht
SHARE THIS STORY
RELATED STORIES
Is Low-Code Development Better for the Environment? Coherence Strives to Streamline Cloud Developer Experience It Happened to Me: How I Suddenly Owed AWS $13,000... Data 2023 Outlook: Rethink the Modern Data Stack It Doesn’t Matter How Much You Spend on AWS
TNS owner Insight Partners is an investor in: The New Stack.
SHARE THIS STORY
RELATED STORIES
AWS Code Catalyst: A 'Low-Code' Approach for the Dev Lifecycle Why Trust and Autonomy Matter for Cloud Optimization Coherence Strives to Streamline Cloud Developer Experience AWS Inf2: A 12-Chip System for Large-Scale ML Production Private SaaS, a New Paradigm
THE NEW STACK UPDATE A newsletter digest of the week’s most important stories & analyses.
The New stack does not sell your information or share it with unaffiliated third parties. By continuing, you agree to our Terms of Use and Privacy Policy.