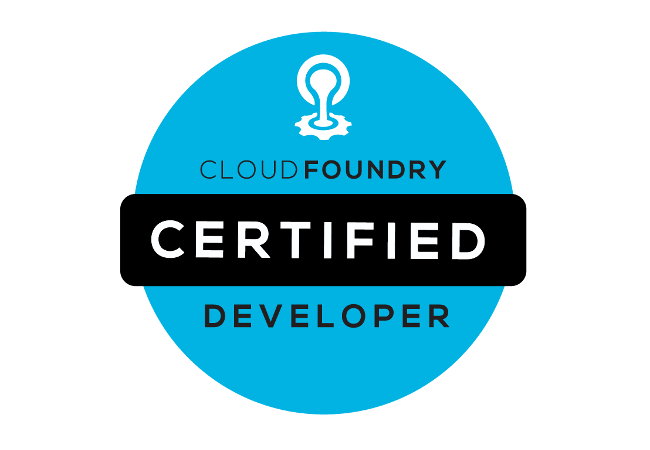 In the current job market, being a software developer is like being the birthday boy or girl at your own personal birthday bash: you’re the center of the party, and everybody wants to give you presents. Given that right now there are half a million tech jobs going unfilled in the US alone — a number predicted to grow to over a million in the next decade — the job market is only going to party on and on.

Businesses around the world need more skilled developers, period. But, as companies increasingly shift operations to the cloud, they also need those workers to have solid and demonstrable cloud skills and expertise. Responding to an impending critical shortage of developers, the Cloud Foundry Foundation has just announced a cloud-native developer certification initiative, the “Cloud Foundry Certified Developer” program.

The certification program will be delivered in partnership with the Linux Foundation, itself responsible for training and accrediting more developers on open source software than any organization in the world. The program starts with a free massive open online course (MOOC), offered via the edX platform, introducing the material — this comes online in early May. The intro is followed by a self-paced “Cloud Foundry for Developers” course, which will cover the cert test specifics and cost $500. The certification exam itself, which takes up to four hours to complete, can be taken online for $300. (Both the course and the exam infrastructure are provided by the Linux Foundation). Anyone who passes the performance-based assessment will be awarded the official Cloud Foundry Certified Developer diploma.

“This program helps overburdened developers, caught between increased workloads and shorter timelines to produce, an effective way to upgrade skills — and keep up with new industry practices,” said Abby Kearns, Cloud Foundry CEO, just before the initiative was announced on March 29th. The training, she added, is designed to offer “hands-on, practical experience building software that runs on Cloud Foundry” while allowing developers more freedom in how they respond to their companies’ internal and client requirements.

Candidates for the certification exam should have hands-on practical experience building software that runs on Cloud Foundry. Topics covered in the exam include:

It’s a hefty list but, said Kearns, eminently do-able even for those relatively new to tech. While experienced devs can jump directly to the review course and certification exam, Cloud Foundry is offering support for those still early in a software career. Newcomers can start with the free intro MOOC, followed up with some hands-on practical experience in the Cloud Foundry platform and continuous delivery methodologies, before tackling the exam.

“I met a developer who was an intern, recently a student, who is using Cloud Foundry but hasn’t quite mastered it,” reported Kearns. “He said the training materials from our site proved really useful as he was getting up and running.”

More than a dozen leading technology, education and systems integration organizations around the world — including EngineerBetter, IBM, Pivotal, Resilient Scale, SAP, and Swisscom — will be offering the training for their employees to move toward Cloud Foundry Developer Certification. Kearns said that many more companies are eager to adopt the certification as an industry benchmark for knowledge and competency.

The certification initiative was driven in part, she said, by the results from a November 2016 Cloud Foundry survey that queried 900 IT workers worldwide. The report showed a widening gap between supply and demand for qualified cloud developers, driven by continued rise in non-tech companies’ need to hire in-house developers. And that discrete (i.e. cloud) technologies are in the greatest demand, over second and third place demand for mobile app developers and coders proficient in certain specific languages.

In both cases, Kearns said, “Companies indicated training is the preferred solution to address the skills shortage, with over 60 percent proclaiming that training existing staff is better than hiring new talent and outsourcing.”

Brian Gregory, director of engineering and cloud strategy for Express Scripts — a Fortune 100 healthcare company — could not agree more. “The Cloud Foundry Certified Developer program will be a huge value to the community,” he said. After Express Scripts moved to Cloud Foundry, he continued, the company saw “a massive uptick in productivity and business results.” So much so, in fact, that they can’t hire developers fast enough — and, indeed, have a current goal of hiring 1,000 new developer positions.

Other companies, including some truly behemoth corporations, have enjoyed similar accelerated growth curves after adopting Cloud Foundry technologies. The Cloud Foundry Foundation reported, for example, that Comcast was able to speed time-to-market for its apps by 75 percent. HCSC, a huge customer-owned health insurance company, was able to reduce app development lead time by an order of magnitude. It “Took us 15 months to build a mobile app the old way; new way took 14 weeks,” an HCSC engineering team manager reported to the foundation. 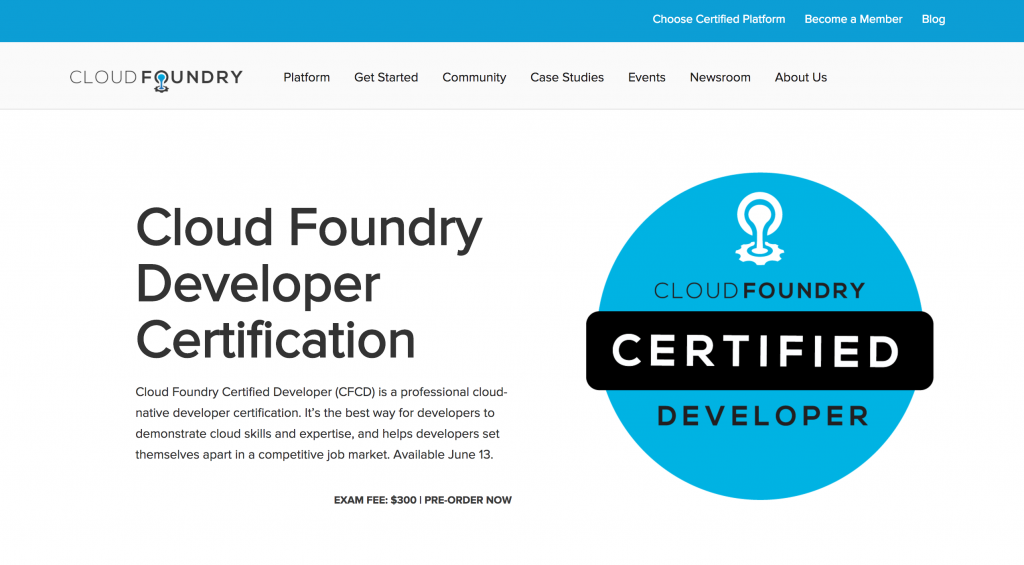 So, ultimately, Cloud Foundry Certified Developer status holds serious value for both employer and developer. The skills-based certification, while not exactly a cakewalk to obtain, shows that a software dev can jump on board and get straight to work. And companies can verify that a job candidate has practical Cloud Foundry across any distribution. (The cert covers 2017 Certified Platforms, including Huawei FusionStage, IBM Bluemix Cloud Foundry, Pivotal Cloud Foundry, SAP Cloud Platform and Swisscom Application Cloud). The training material can also be licensed, allowing Cloud Foundry Foundation members to offer the content through their own employee and customer training channels.

Kearns compared the changes to business made possible by open source and cloud models to the unprecedented growth unleashed in earlier centuries first by railroad and then national highway infrastructure.

“Just as these project transformed the country, so the cloud in general, and Cloud Foundry, in particular, are transforming businesses and by extension entire industries,” said Kearns. “And developers are now the primary engines of this change.”

The Cloud Foundry Developer Certification exam will be available online beginning June 13th. The exam will also be offered in-person at the Cloud Foundry Summit Silicon Valley on June 13-15. Those registering for on-site certification when signing up for the conference will receive a discount. Discounts are available for bundled and bulk pricing purchases. To find detailed information on the suite of offerings, visit the certification home page.