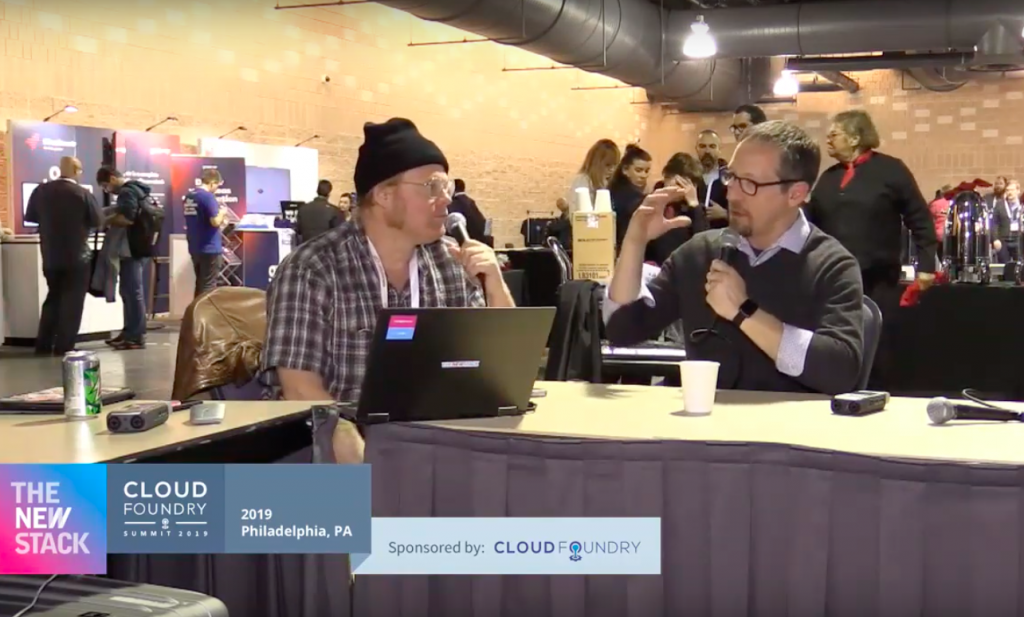 “Building bridges” and forging partnerships,” at face value, might seem like marketing speak. But put into context, these concepts can mean a lot. To wit, during a podcast hosted by The New Stack’s Joab Jackson, managing editor, at Cloud Foundry Summit North America last week in Philadelphia Cloud Foundry CTO Chip Childers had a lot to say. Among other things, he articulated how Cloud Foundry has worked to remove silos and boost collaboration for the development of new cloud native technologies for the open source community during the past year.

Indeed, Childers explained how the theme of the show is building the future. “That really applies in two ways: it applies, of course, — and I think, we spend a lot of time talking about this — to the contributors that build the Cloud Foundry platform. But it also equally applies to the end users, Because the whole reason why companies like American Airlines or Charles Schwab or Comcast or DICK’S Sporting Goods… are really focused on cloud native platforms,” Childers said. “They’re really trying to use software as a competitive advantage in the market that’s extremely technology-centric now. You know, every market becomes technology-centric. So, they’re building the futures of their companies using these technologies, using these open source platforms that they can build off of, right? So dual meaning.”

Collaboration is also the theme at the conference, Childers said. “Last year, I spent time talking about the notion of building bridges between communities and I did a little bit of a call back to that because it’s this idea that we’re building bridges is all about how do you collaborate more?” Childers said.  “And that happens in the open source communities — they need to build bridges between each other and that that collaboration is what we heard from…American Airlines. That’s what the customers and the end users want because they want everything to work well together.”

But building bridge must also take place inside organizations — and more work must be done, Childers said. During a study Cloud Foundry completed, for example, it was revealed companies are struggling to use software effectively as a strategic thing. “The number-one challenge — and this is by orders of magnitude — is culture,” Childers said. “So, if you think about building bridges, the open source community has a lot to share with companies about how they deal with internal silos and rethink the way that they operate as an organization to becoming a learning organization.”

Cloud Foundry’s core mission is also about facilitating technology adoption in the open source community, and to that end, Cloud Native Buildpacks (CNBs), a major project the Cloud Foundry recently introduced, was much discussed during the conference. As defined by the Cloud Foundry, CNB buildpacks offer a “platform-to-buildpack API contract” allowing developers to add source code that is then outputted as Docker images for cloud platforms (that also support OCI images).

Childers described how buildpacks represent the logic and “get it turned into a container so they’re able to detect to whether they have the responsibility for it.” Using code written with Ruby as example, the buildpack is responsible for “compiling, joining down dependencies and packaging this thing up so then a platform can run it,” Childers said: “What’s important to understand about buildpacks is that and this also applies to this next generation buildpack project, buildpacks have both developer as well as operational value.”

For the developer, this means he or she can just produce the code and the CNB does most of the rest as is integrated into a cloud native platform. “You don’t build a Docker file and you don’t have to go to a container build service — the platform itself will take that responsibility for you.”

For operations, that means the platform recreate the containers. “So, where does that become valuable?” Childers said. “Well, it becomes valuable, for example, if you need to patch the underlying root file system because there’s another… vulnerability.”

Open Highlighting the Need for Digital Accessibility with Chip Childers on YouTube.

1:22: What’s going on at Cloud Foundry? How are you expanding and evolving?
5:09: So what do buildpacks do?
12:41: What is Eirini based on?
17:06: So it sounds like at some point in the near future, Kubernetes will have feature parody with Deigo, as from the perspective of Cloud Foundry
18:25: Do you expect that there will be additional capabilities that Kubernetes will offer for end users down the road?
19:56: What are Istio and Envoy bringing to the table here?


The New Stack is a wholly owned subsidiary of Insight Partners, an investor in the following companies mentioned in this article: Docker.