Cloud Foundry’s Past, Present and Future Discussed Over Pancakes

In this episode of The New Stack Analysts podcast, we recorded a panel discussion held during our pancake breakfast at Cloud Foundry Summit North America earlier this month in Philadelphia with Cloud Foundry as the featured topic.Hosted by The New Stack’s Alex Williams, founder and editor-in-chief, and co-hosted by Joab Jackson, managing editor, panel invitees discussed Cloud Foundry’s evolution over the past few years and the key role it continues to play in the open source community.
Apr 11th, 2019 5:00pm by B. Cameron Gain 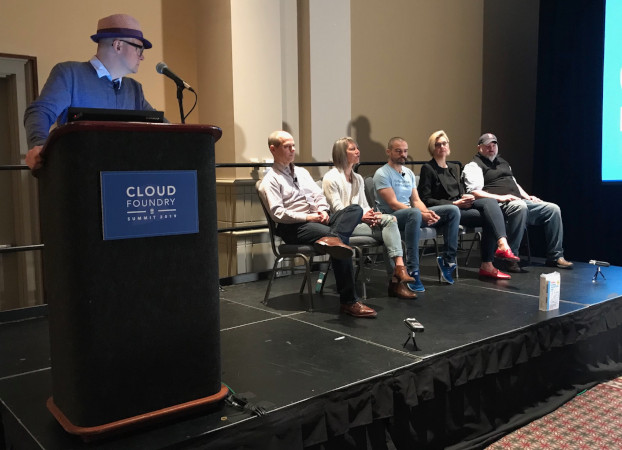 Cloud Foundry’s Past, Present And Future Discussed Over Pancakes

For many, it is hard to believe that Cloud Foundry has existed for more than a decade after it was founded in 2008. Since its beginning, it certainly has more than established itself as a platform as a service (PaaS) of choice for developing, deploying and scaling open source applications. It has also certainly played a role in the growing momentum in the adoption of Kubernetes, microservices, cloud native and other new technologies as well as many other open source tools that continue to help transform DevOps practices.

In this episode of The New Stack Analysts podcast, we recorded a panel discussion held during our pancake breakfast at Cloud Foundry Summit North America earlier this month in Philadelphia with Cloud Foundry as the featured topic.

Hosted by The New Stack’s Alex Williams, founder and editor-in-chief, and co-hosted by Joab Jackson, managing editor, panel invitees discussed Cloud Foundry’s evolution over the past few years and the key role it continues to play in the open source community. The panelists were:

Davis opened the discussion by describing how Pivotal was “largely behind the original Cloud Foundry and you will see at this conference that our customers have been hugely successful with Cloud Foundry, with the open source and with our commercial distribution as well.

“And that has been kind of our flagship product for the last four, five and six years — we just turned six two or three days ago and you’ll see those stories of success all over the conference.

But one of the things that’s really interesting that’s happened in the last couple of years is particularly driven by those hugely successful customers,” Davis said. “They’ve come to us and said, hey, we’ve been hugely successful with cloud native applications or in refactoring some of our existing applications. Can’t you help us with more?”

The underlying code used for open source deployments have also changed over the course of Cloud Foundry’s use as a PaaS, O’Grady said “I think that the biggest change for me, from a project standpoint, you know, obviously much has changed in the project. You know, portions have been written in Ruby, portions have been written in Go,” O’Grady said. “The actual line source code itself has changed many times over the years. It certainly has evolved from a functional capability standpoint.”

Docker, of course, has had a huge impact, O’Grady said. “When Docker dropped in 2013, the project has had this sort of re-imagine itself and evolve in a world where it was born into a world where containers were not a thing and had to sort of find its way in a world in which container is very much were a thing,”  O’Grady said. “So, I mean, that change alone has sort of redefined the way the people view the project and the way that the project viewed itself. So to me, it’s one of the biggest adaptations said to make.”

“And I feel like now, there’s a lot less time spent on explaining how these things work but more of how do you tie this to value. The foundation over the last three years has evolved to where interoperability and adaptation are very much front and center of our strategic initiatives,” Kearns said. “The technology, the community and the ecosystem continue to evolve because the industry around us, the cloud native industry is changing and changing quickly. And as a key technology in that, we have to do the same or risk being left behind.”

Jones said that, as of late, he has observed an emergence of cultural growing pains when organizations opt to shift to Kubernetes. “All of a sudden, people are getting very distracted with the hamster wheel of changing VMs for containers and not necessarily with an eye on the value,” Jones said.

“I’m not sure necessarily that the size or the number of people focusing on improving with deliberate delivery of use value has diminished but there’s certainly a lot more noise around this other stuff.”

At Comcast, Rioboli described how after becoming CIO about two years ago, his “world has changed a lot.” “And so we’ve been doing a lot of work and a lot of the change we’ve gone through as an IT organization in the last two years is really, it’s probably less about the technology and more about the culture and the way we interact with the business,” Rioboli said. “And the way that I think, a lot of IT organizations are set up as I’ll say, it’s a negative way but somewhat order takers where the business comes and says, ‘do this, do this, do this,’ and the IT organizations do each of those things in individual projects. And so we’ve really tried to shift towards thinking in terms of platforms and we think in terms of platforms and reusable capabilities and how do we do things once and then get to use it over and over again.”