CloudBees Connect Summit: Let DevOps Get on with Their Work

The road to DevOps for your organization will lead to success, survival, or in most cases, both.  Your organization's digital transformation will also almost invariably not be easy.
May 27th, 2020 3:00am by B. Cameron Gain 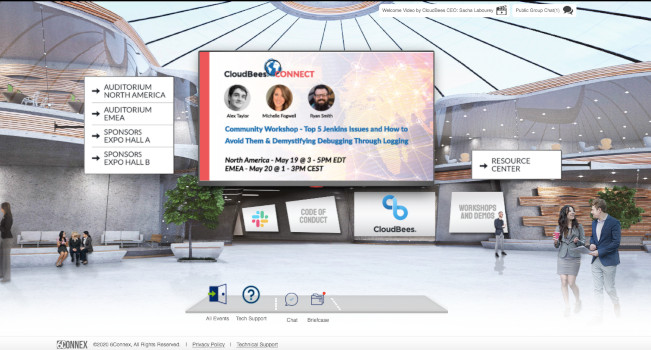 One of the main challenges of DevOps since its inception over a decade ago is still about the basic mechanics of its adoption. This applies to whether an enterprise is a Fortune 500 company or a group of hooded hackers who have divided to build a business around an application.

Established organizations face the additional struggle of having to port existing monolith and often data center software to port to cloud environments. They also very often have a prevalent dinosaur-like culture less attuned to DevOps and agile practices.

The act of breaking down and dissecting DevOps into its integral parts and how organizations can overcome the challenges associated with the different individual components were the main themes of the CloudBees Connect virtual summit held last week.

In other words, many, and likely most, DevOps teams have yet to master the basics.

During the summit keynote, Brian Dawson, CloudBees’ director of product marketing and DevOps evangelist, reflected on this back-to-basics theme by comparing DevOps to a virtual car.

“It’s like when you go on any test drive, we’re going to start by covering a few basics that might seem like common knowledge, but it’s like punching in your commute into the GPS — you know where you want to go,” Dawson said during his keynote. “You know the roads, but GPS helps us find the best way to get there.”

In this post, we cover some of the key takeaways of CloudBees Connect Summit, including insights into DevOps culture, continuous integration/continuous delivery (CI/CD) and technologies, Jenkins (and why Jenkins X is not the same thing) and other tools and a word on the summit’s virtual design.

What It Takes to Get There

The road to DevOps for your organization will lead to success, survival, or in most cases, both. Your organization’s digital transformation will also almost invariably not be easy, Bob Kelley, director delivery engineering, InterContinental Hotels Group (IHG), said during this CloudBees Connect keynote. He noted how “there was a lot more to deal with than we expected” after IHG began its digital journey.

CloudBees’ Brian Dawson said today at CloudBees Connect that Capital One’s DevOps is “outpacing some competitors” that are “two to three times as large.” Capital One’s Jennifer Hansen said during a panel discussion DevOps is “about people and culture.” @CloudBees @thenewstack pic.twitter.com/FcP7v80wMG

However, success stories abound. On the first day of the summit for the North America during the panel discussion “Reality of Delivering Modern Software in an Enterprise,” CloudBees’ Dawson used Capital One’s DevOps as an example of an enterprise that, thanks to its digital transformation, is “outpacing some competitors” that are “two to three times as large.”

“We have been focused on delivering high-quality working software in a consistently safe, reliable and efficient manner,” Hansen said. “So that’s a lot. To really get to this, we’ve transformed how we work across the software delivery lifecycle.”

At the same time, empowering engineers “to build great products for our customers” has involved “people and culture,” Hansen said. “We have been building a culture of continued learning and development. We’ve been reimagining our operating model,” Hansen said. “We want to have designers, engineers, product managers and business partners. They all work together,” Hansen said. “We’re trying to continue to create the shared experience across the board and shared responsibility and accountability. Because, ultimately we’re all in this together, trying to create a better customer experience.”

Hansen described how her DevOps team made the shift from “waterfall to agile and DevOps” and  while aligning “on RESTful APIs.” It moved to a microservices architecture and containerization in the cloud.

“Actively contributing to and using open source software” has also played a key role, Hansen said. “We have a cloud-first mindset. So, ultimately our goal is about speed and automation while remaining secure and applying all those, the best practices of what it means to be well managed on the cloud,” Hansen said.

CloudBees’ Brian Dawson said today at CloudBees Connect that Capital One’s DevOps is “outpacing some competitors” that are “two to three times as large.” Capital One’s Jennifer Hansen said during a panel discussion DevOps is “about people and culture.” @CloudBees @thenewstack pic.twitter.com/FcP7v80wMG

DevOps teams also often struggle with business stakeholders that might second guess or thwart technology decisions. Even when the business objective and mission are clear, there remains the risk that management might post restraints or hinder DevOps’ progress to meet these goals. On the second day of the summit for the EMEA region during the panel discussion “Reality of Delivering Modern Software in an Enterprise DevOps,” an attendee asked during the Q&A session about “overcoming C-suite resistance” to DevOps and getting “getting management to support your DevOps initiatives.”

While it is easy to blame management for just not “getting it,” one solution is to simply state how a particular technology or investing in DevOps can deliver specific business results that can also be measured.

“If you have any executive sitting in any organization, and you’re presenting them something that they could potentially leverage themselves to improve their own organization and meet their own goals, most, if not all people are going to be very supportive of that,” Jimmy McNamara, software engineering product manager, Fidelity Investments, said. “So, it’s about articulating a vision value, and then ideally demonstrating that in a very tangible way with these sorts of data.”

DevOps must be left alone to do its work, said Aoife Fitzmaurice, a DevOps principal architect at Fidelity Investments. DevOps “needs to have the control to be able to make those changes… allowing them to be able make the transformation and applying that culture into their teams,” she said.

“Obviously there are other kinds of fundamental things that they need to work with, but within those kinds of constraints, allowing them” to make the shift is key, Fitzmaurice said.

CloudBees’ Viktor Farcic: “Jenkins X is not better or worse than Jenkins” and is not a new and improved version of Jenkins. “It is a completely different solution.” Live at CloudBees Connect’s Community Workshop -”Introduction to Jenkins X” @CloudBees @thenewstack @vfarcic pic.twitter.com/db7VmVzJg4

The summit featured a number of workshops and demos that were intended to be both practical and hands-on. The workshop “Introduction to Jenkins X” CloudBees,” for example, helped to stave off confusion between Jenkins and Jenkins X.

In a nutshell, Jenkins X was designed for deploying code from continuous delivery pipelines to Kubernetes and cloud native environments, which Jenkins can be used for that process as well, of course. However, Jenkins X also does not need to replace existing Jenkins configurations as it is compatible with Jenkins and is applicable for Jenkins pipelines for on-premise deployments.

That said, CloudBees’ Viktor Farcic, principal software delivery strategist and developer advocate, who hosted the workshop, said: “Jenkins X  is not better or worse than Jenkins” and is not a new-and-improved version of Jenkins, either.

“It is a completely different solution,” Farcic said.

For CI/CD, Josh Grant, a solutions architect for Sauce Labs in his workshop ”Building a CI/CD Pipeline,” described, among other things, how critical the testing environment is for application development, deployments and management. In other words, you can’t just have test automation — it must also be good. “CI/CD requires good test automation” and you must “have a good test-automation strategy,” Grant said.

Introduced in parallel during the week of the summit, CloudBees said its software delivery management (SDM) platform now offers integrations to include Google Cloud Build and Tekton pipelines. The release is seen as a helpful move by CloudBees to offer developers the option to extend their deployments — in this case with CloudBees SDM — on Google Cloud.

Earlier this month, CloudBees introduced Feature Flags to help developers manage production deployments with what it said was tighter control with an on-premise feature manager.

CloudBees Connect also featured two virtual exhibit halls, signalling a possibility that virtual summits and conferences could evolve into MMORPG-like experiences, devoid of streamed-from-home talking heads on Zoom that pervades so many COVID-19-era meet-ups. While many may miss the human contact, there are also likely many conference-goers who prefer to avoid sensory overload and travel, not to mention the social exhaustion of real-world events. CloudBees Connect Summit’s exhibit halls, for example, allowed attendees to interact directly with company representatives virtually in order to learn more about a software tool or to get other information.

What more do developers want?

BC Gain’s obsession with computers began when he hacked a Space Invaders console to play all day for 25 cents at the local video arcade in the early 1980s. He then started writing code for very elementary games on the...
Read more from B. Cameron Gain
SHARE THIS STORY
RELATED STORIES
Argo CD and Flux Are CNCF Grads: But What Now? A Look at Kubernetes Deployment Building a To-Do App using GitHub Actions, Playwright, Next.js DevPod: Uber's MonoRepo-Based Remote Development Platform Top 5 Considerations for Better Security in Your CI/CD Pipeline
TNS owner Insight Partners is an investor in: The New Stack.
SHARE THIS STORY
RELATED STORIES
How Yarn Workspaces Accelerated LinkedIn Code Delivery EngFlow Harnesses Google Bazel for Faster Monorepo Builds CircleCI to Customers: Change All Secrets and API Tokens NOW! Coherence Strives to Streamline Cloud Developer Experience 4 Tips to Avoid Downtime Risks and Start the New Year Strong
THE NEW STACK UPDATE A newsletter digest of the week’s most important stories & analyses.
The New stack does not sell your information or share it with unaffiliated third parties. By continuing, you agree to our Terms of Use and Privacy Policy.