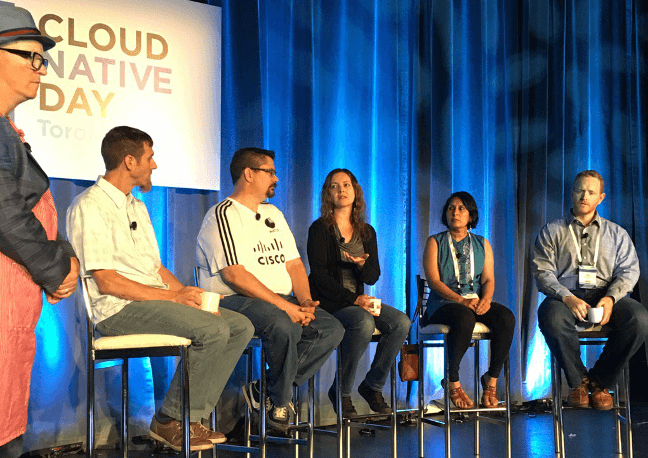 Owens began the panel with a brief introduction to Mantl, including how the platform aids developers in working with containers at scale. “It’s not too difficult to get containers and orchestration deployed, but to try to run and operate that at scale over a long period of time is a lot more complicated. You have things that fail within that ecosystem, and you don’t have any notification that it failed.”

Where there were once clear designations between parts of the developer community, many roles are now embracing DevOps practices, or having System Administrators get more involved with projects. “The biggest thing I’m seeing now in the ecosystem is the communities are a lot more integrated. You have this mix of developers and system administrators, which on one hand makes the community stronger, but on other hand creates friction because the things that developers want are not necessarily things system admins want,” Foster noted.

Determining what the community wants for a project can be a pain point in and of itself. Handling contributor rejections alongside long-term project management in open source communities requires extreme attention to detail. “One of the things that helps me in the way I work is, I focus on technical details and say, ‘Where does this make sense for the project and system I’m making?’ Everybody coming in, you have to realize they are trying to do what they think is the right thing for the project,” said Khan.

When working with containers in production, Wright notes that developers should be aware of the potential shortcomings of the ecosystem. Rather than focusing on overly-marketed demonstrations, Wright asks the community as a whole to slow down and reflect on the practicality of adopting containers en masse. “A flashy demo shows the concept, but it doesn’t necessarily bake in the experience and time it takes to build a robust system. We’re in this internal tension where we see the potential, we see where we want to go, and we’re lured by the bright shiny object. We really as an industry need to meter our thinking about how are we going to adopt these things and make them work in a production environment,” Wright said.

As the conversation drew to a close, Owens highlighted a focal point to how today’s cloud solutions will continue to change with the advent of open source: “I think open source will change a lot in all the public clouds, including Amazon. It will be more externalized and open for people to access and get data out over time. Containers will be part of that.”

Cisco and Red Hat are sponsors of The New Stack.