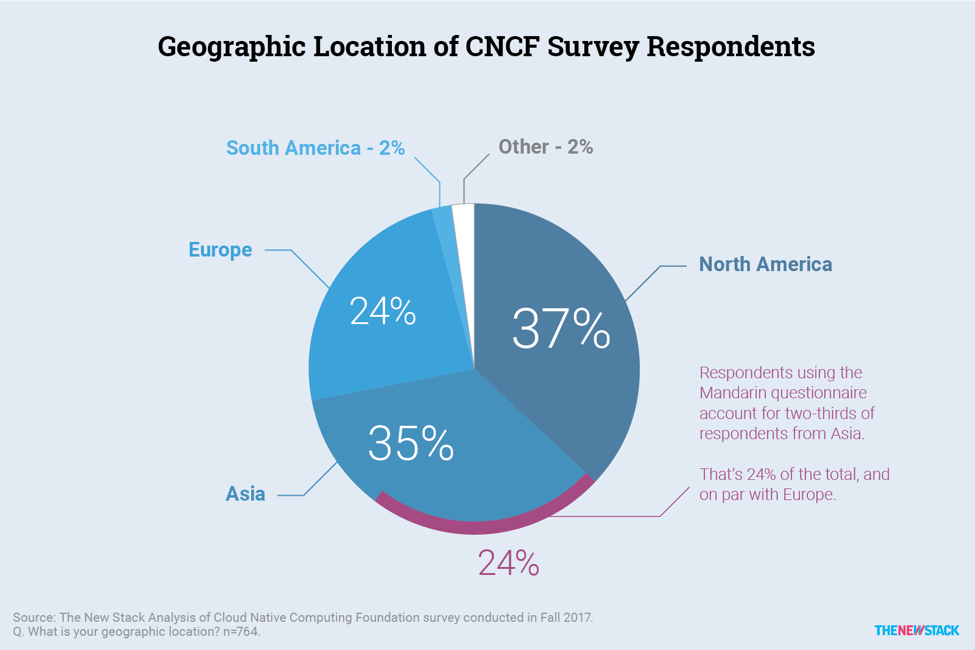 Last year, the Cloud Native Computing Foundation (CNCF) conducted its first Mandarin-language survey of the Kubernetes community. While the organization published the early results of the English-language survey in a December blog post, the Mandarin survey results will be released on April 5 in a webinar with Huawei and The New Stack.

Many of China’s largest cloud providers and telecom companies — including Alibaba Cloud, Baidu, Ghostcloud, Huawei and ZTE — have joined the CNCF. And the first KubeCon + CloudNativeCon China will be held in Beijing later this year.

The Mandarin survey results, when they are released, will help illuminate container adoption trends and cloud-native ecosystem development in a growing market segment for distributed infrastructure technologies in Asia — and China, in particular.

The New Stack got a sneak preview of the data as a subset of the combined English and Mandarin language datasets, which our Research Director Lawrence Hecht used to compile the findings in our recent ebook on Kubernetes Deployment & Security Patterns. In the upcoming webinar, The New Stack Editorial Director Libby Clark will share what we learned about how Kubernetes is deployed and the infrastructure powering those deployments, including storage and networking.

Huawei cloud platform chief architect Dr. Ying Xiong and CNCF Vice President of Marketing Dee Kumar will also discuss their latest research, analysis and perspectives on how the container ecosystem is evolving in China. Please join us for the CNCF’s webinar at 10 a.m. Pacific time on Thursday, April 5, 2018, to learn more about container adoption and Kubernetes use in China.

SHARE THIS STORY
RELATED STORIES
Meet SIG Cluster Lifecycle and Cluster API Maintainers at KubeCon How Boeing Uses Cloud Native How Donating Open Source Code Can Advance Your Career 3 Ways an Internal Developer Portal Boosts Developer Productivity What Do 'Cloud Native' and 'Kubernetes' Even Mean?
SHARE THIS STORY
RELATED STORIES
Spotify's Backstage: A Strategic Guide The Latest Milestones on WebAssembly's Road to Maturity How Intuit’s Platform Engineering Team Chose an App Definition 10 Essential Practices for Building Software for Cloud Scale  Driving Digital Experiences via Cloud Native Applications
THE NEW STACK UPDATE A newsletter digest of the week’s most important stories & analyses.
The New stack does not sell your information or share it with unaffiliated third parties. By continuing, you agree to our Terms of Use and Privacy Policy.