CNCF's Cheryl Hung largely spoke of her lifework before and after her stint at the search engine giant during a podcast Alex Williams, founder and editor-in-chief of The New Stack, recently hosted at  KubeCon + CloudNativeCon 2018 in Shanghai.
Jan 28th, 2019 3:00pm by B. Cameron Gain 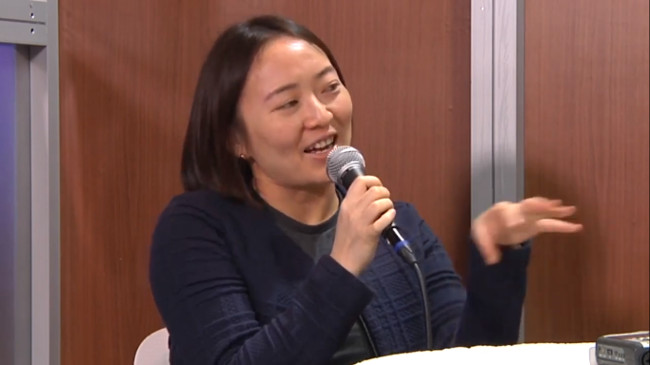 Cheryl Hung, currently the director of ecosystem for the Cloud Native Computing Foundation (CNCF) was already intent on working for Google as a young teenager.

It was “a cool startup,” Hung said, where it seemed everyone wanted to work, with all kinds of fun and perks — including free food and even on-campus massages. Her career track did indeed take her to Google, where she worked as a software engineer and held other roles for over five years. Now, for the CNCF, she spends a lot of time traveling and helping organizations to learn about how they can take advantage of cloud native platforms.

While Google and its obvious connection to containers and Kubernetes represent a focal point in Hung’s career, Hung largely spoke of her lifework before and after her stint at the search engine giant during a podcast Alex Williams, founder and editor-in-chief of The New Stack, recently hosted at KubeCon + CloudNativeCon 2018 in Shanghai.

Besides her early aspirations to work for Google, Hung says she always wanted to work directly in software development and deployment  at a young age.

“I’ve always been good at math, but I didn’t want to become a mathematician,” Hung said. “Computing and coding to me seemed to be something that was very logical, understandable, and also, very interesting.”

On a root level, Hung described how “there’s not many professions out there where you think for the most part like you solve puzzles.”

“That’s how you actually make progress. And I decided at that point that I was going to go in computer science and to go get a computer science degree and to become a software engineer,” Hung said.

Hung said she was in her early 20s when she joined Google. “So, I got there earlier than what I expected for my life dream goal,” Hung said. “But after about five years there, I was like, ‘okay, I probably need to figure out what’s next.’”

While Google is obviously a great company to work for with its famous campus and technical infrastructure and “they treat their employees really nice,” Hung said. “People tend to speak to other Google people a lot.”

“I’ve been thinking in containers ever since 2010, but there are also lot of interesting problems that are outside Google and the rest of the industry, while inside Google, it’s hard to see,” Hung said.

Hung described her fascinating work at Google as a backend engineer working on Google Maps and search-and-ranking infrastructure, but at the same time, she said “those kinds of problems are not really problems that you get for most of the rest of the world,” Hung said. “So, it was like, ‘I’m 26, I’ve been at Google for more than five years, I’ve been in two different offices, five different teams and it’s time for me to go and see what else is out there.”

After her stint at Google, Hung worked for a while at StorageOS, applying her experience to help enterprises manage databases with containers and then Kubernetes. Now, at the CNCF, Hung has direct access to those working with cloud native deployments — and the community.

The more I progress in my career, the more I realize that it’s the relationships and the people that really matter, and that’s what gives the longevity and the sustainability which is why I did move into the CNCF,” Hung said.

During the past six weeks leading up this podcast interview, for example, Hung said she had served as an active speaker and has been heavily engaged with educating the community while attending several conferences. “My core focus is really on cloud native end users — so, that’s about companies that are using Kubernetes or other cloud native tech but they’re not necessarily selling cloud services themselves,” Hung said.

6:07: What was the most technically challenging aspect of it that you saw?
8:23: How you do follow your love of performing and being on stage when you’re talking about technical subject matter?
12:45: Who are the people you’re starting to get to know in your work?
15:37: What are the end user’s pain points and how do you help them get through them? How do you communicate that back internally to the community?
20:29: Are there tools that you like to employ at all in the practice of developing ecosystems themselves?
22:34: What are you looking forward to in 2019?

Raygun sponsored this post, which was produced independently by The New Stack. The Cloud Native Computing Founation and KubeCon + CloudNativeCon are sponsors of The New Stack.