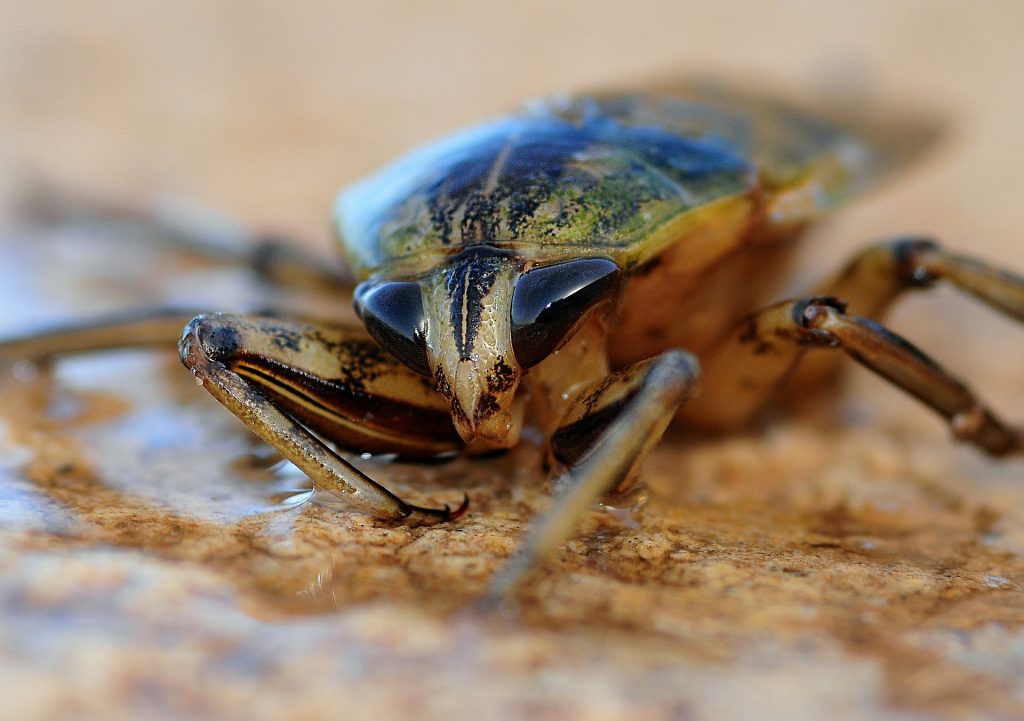 Editor’s Note: Does the world need another database system? Only if it answers some fresh requirement unmet by existing technologies. For CockroachDB, the aim is to be both highly scalable and transactional. We first heard about Cockroach Labs last June when the startup scored a $6.25 million round of investment led by Benchmark Capital, so we asked company to share the technical details of its alpha-stage, open source, distributed SQL database:

The goal of CockroachDB is to make data easy. If you could take all the energy wasted wrestling with database shortcomings, and invest that time, money and engineering into making your company stronger and your product better, everyone would be better off.

Databases are the life-blood of every modern business, yet despite nearly 45 years of evolution, developers are left with a small range of options:

The biggest frustration with these options is that if a company succeeds, and especially if it succeeds wildly, it will be extremely expensive to scale, both in financial and engineering resources. None of these solutions are scalable, transactional, and available, which is why we were inspired to build CockroachDB.

CockroachDB is a distributed SQL database built on top of a transactional and consistent key-value store. The primary design goals are support for ACID transactions, horizontal scalability and survivability (hence the name). CockroachDB implements a Raft consensus algorithm for consistency and aims to tolerate disk, machine, rack and even data center failures with minimal disruption and no manual intervention.

So how does CockroachDB work? Let’s start with a look at the architecture.

CockroachDB’s architecture is structured in layers that make complexity an easier task to manage. Each higher level in the architecture treats the lower levels as functional black boxes, while the lower layers remain completely unaware of the higher ones. 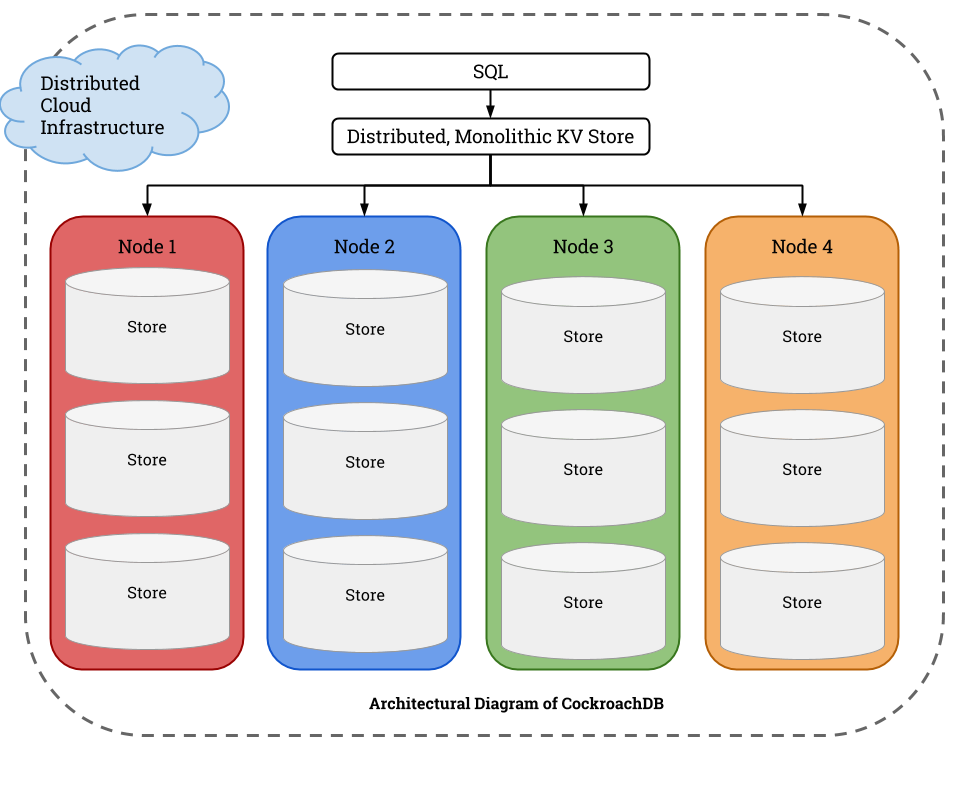 From here, we’ll walk through the design of CockroachDB starting at the lowest level and working our way up to show how it achieves three key properties: Transactionality, Scalability, and Survivability.

Let’s consider CockroachDB at its lowest level, running on a single machine. Even though the data is logically organized into tables, rows, columns, etc., at the lowest level, individual pieces of data (think of a single column value) are stored on-disk in a sorted key-value map.

CockroachDB starts off with a single, empty range of key-value data encompassing the entire key space. As you put more data into this range, it will eventually reach a threshold size (64MB by default). When that happens, the data splits into two ranges, each of which can be accessed as a separate units, each covering a contiguous segment of the key space. This process continues indefinitely as data is added (see figure below).

The monolithic sorted map in CockroachDB is made up of the sorted set of all ranges —  one at the start of the alphabet, the next in the middle of the alphabet, and so on. We opt for small ranges as they’re easily moved between machines when repairing or rebalancing data. As new data flows in, existing ranges will continue to split into new ranges, aiming to keep a relatively consistent range size somewhere between 32MB and 64MB.

When our cluster spans multiple nodes and stores, newly split ranges are rebalanced to stores with more capacity available.

This design gives you a scalable database that can run across many different nodes. To make the database survivable, CockroachDB has to replicate the data. 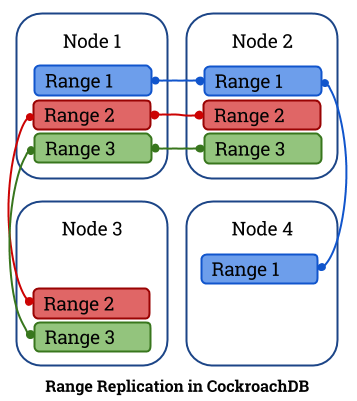 When you have data that is stored across multiple machines, it’s important that the data be consistent across replicas. CockroachDB uses Raft as its consensus protocol. Each range is an independent instance of the Raft protocol, so we have many ranges all independently running Raft. This allows a considerable degree of flexibility, including arbitrary replication configurations for different segments of the key space.

In any group of replicas, one of the nodes will be elected the leader, which then coordinates the decisions for the group. Whenever you want to write something to the database, it goes to the leader to be proposed to the cluster, and is committed as soon as it has been acknowledged by a majority (either by 2 out of 3 or by 3 out of 5 of the replicas).

We actually share this implementation of the Raft protocol with the etcd team, but add another layer for scalability. In CockroachDB, each Range corresponds to a Raft instance, and their number is much higher than that of the physical nodes hosting them. To help scale Raft we built MultiRaft, a layer on top of Raft which groups messages sent by the replicas.

One of the foundations of CockroachDB is strong consistency and full support of distributed ACID transactions. CockroachDB provides distributed transactions using multi-version concurrency control (MVCC). MVCC data is stored and managed on each local storage device with an instance of RocksDB. Mutations to MVCC data are consistently replicated using Raft.

CockroachDB provides snapshot isolation (SI) and serializable snapshot isolation (SSI), allowing externally consistent, lock-free reads and writes, both from a historical snapshot timestamp and from the current wall clock time. SSI is provided as the default isolation level; SSI eliminates some rare anomalies which are present with SI, but suffers worse performance in the event of contention. Clients must consciously decide to trade correctness for performance.

For more information on how CockroachDB approaches transactions, read this blog post.

CockroachDB’s SQL implementation leverages the distributed transactions and strong consistency provided by the monolithic sorted key-value map to consistently encode, store, and retrieve the SQL table data and indexes. The SQL grammar supported is a derivative of PostgreSQL with some modern touches, and supports any Object-Relational Mapping (ORM).

For more information on CockroachDB’s SQL implementation, read this blog post and check out our SQL branch on Github.

We built CockroachDB to have a simple deployment that fits well with the container model. Nodes are symmetric and self-organize — there’s no single point of failure, no complicated configuration (in fact, only a handful of command-line options), nor is there a tangle of different roles to be managed. All that’s required is a single binary (easily put into a container) which runs on each node in order to join the cluster and export the local stores for accepting new writes and rebalances.

CockroachDB self-organizes by using a gossip network, which is a peer-to-peer network where nodes communicate with each other. A new node can join the gossip network as long as it can talk to any other node which has already joined. The gossip network continually balances itself to to minimize RPC traffic and the number of hops required to communicate new information to each node in the network. Nodes exchange their network addresses as well as store capacity information. If a node discovers that it has more capacity than the mean of its neighbors, it will start to rebalance the range to the other nodes. Similarly, if a node goes down, the replicas of its constituent ranges will notice its absence and look for another node to which they can re-replicate.

CockroachDB is currently in alpha, and we are actively building out features in preparation for our beta launch. If you’re interested in contributing to or using an alpha version of the product, check out our Github repo.

CockroachDB aims to make data easy, and it does so by hitting the sweet spot: combining the transactional guarantees ad query language of traditional SQL databases with the scalability of NoSQL solutions. In addition, synchronous replication via Raft provides strong consistency, even across wide area deployments, leading to new levels of survivability and disaster recovery. Plus, of course, it’s open source.