Collaborative Robots Will Help Human Workers, Not Replace Them 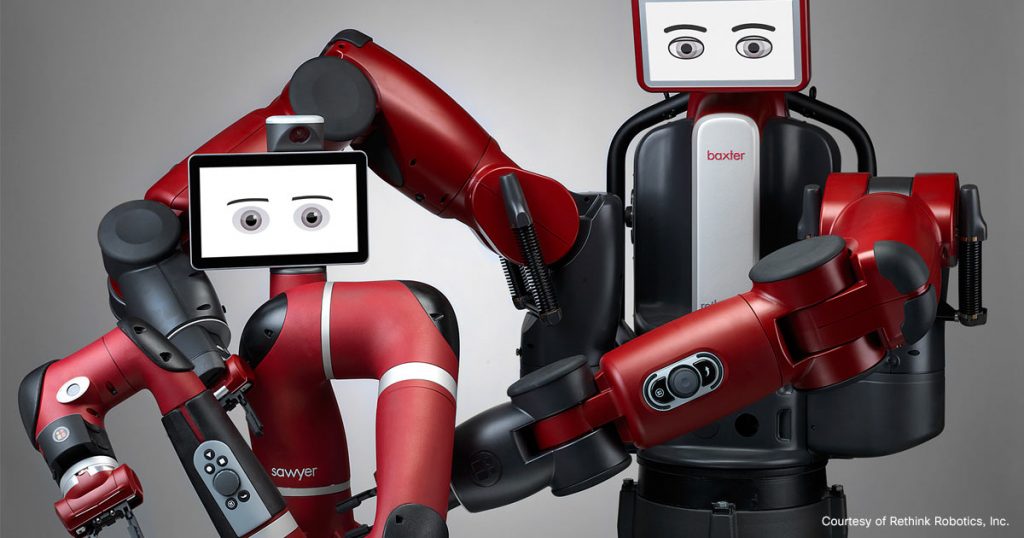 With all the news of grocery-delivering robots, wandering telepresence ‘bots and crop-planting drone swarms, one would be forgiven for believing there is a robot takeover afoot. Well, you may be right. Some industry observers are predicting that the next big growth trend in robotics is the collaborative robot, a smaller, smarter and more lightweight version of older and more dangerous industrial-sized robots. They are designed to safely work alongside humans, rather than being sequestered in a safety cage, helping people out in various tasks while increasing productivity. But how do these machines work, and what might a collaboration between human and robot look like?

Collaborative robots — also called “co-bots” for short — come in a variety of shapes, sizes and functions. But their draw comes primarily from their ability to work in tandem with humans, in comparison to industrial robots and service robots, which often require safety cages or a wide buffer zone around them in order for them to operate. Co-bots also don’t need highly skilled technicians, and can be easily programmed via tablet or smartphone apps. Frank Tobe of The Robot Report explains why co-bots are the next big wave for small to medium-sized businesses:

“There are many reasons for the emergence of collaborative robots: companies are using them because they can be placed alongside humans in small-spaced electronics assembly lines, because they are affordable and easily trainable, and because they are flexible to handle short runs, repetitive and boring jobs, and ergonomically challenging tasks,” Tobe wrote. 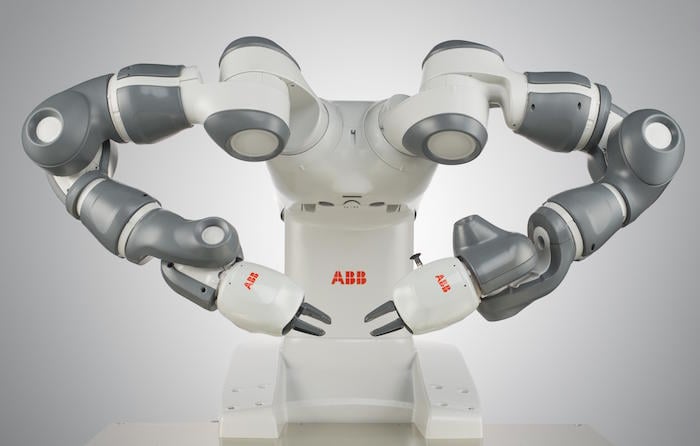 But will its steely robot arms crush me?

Many of the built-in safety features in collaborative robots come from integrated sensors and having appendages and surfaces that are specifically rounded, padded and programmed to minimize the risk of human injury from getting pinched or worse. This is what separates lightweight co-bots from their heavy, industrial counterparts, says Tobe: “The biggest safety feature of collaborative robots is their force-limited joints, which are designed to sense forces due to impact and quickly react.”

Broadly speaking, companies are taking two different tacks when it comes to safety. One is a sensor-based approach that’s more suited to quicker and heavier applications in manufacturing, where sensor-equipped co-bots can determine the presence and location of a human nearby, and immediately respond by taking measures like slowing down, stopping or going around a person. On the other hand, safety can be built into robots themselves, meaning that any contact with a human arm or hand will stop the robot in its tracks. While certainly safer and more suited for close-range interaction, this latter approach means that these co-bots are limited in their maximum loads and speeds.

Regardless of approach, co-bots have to be designed with versatility and safety from the get-go. “No discussion of robot safety can ignore the end-of-arm tooling (EOAT),” said John Henry, an engineering and manufacturing machinery consultant. “If the robot and operator are handing parts back and forth, the tooling needs to be designed so that, if the person gets their fingers caught, they can’t be hurt.”

Robots that do delicate tasks

Companies are now differentiating themselves by offering innovative end-of-arm tooling designs can add extra value to co-bots, ranging from servo grippers to hybrid tooling that combines multiple grippers in one, to advanced tool changers and even intelligent control modules that facilitate quicker feedback between the robot and the end actuator. The result: a robot who is able to perform delicate and relatively complex tasks like folding a paper airplane, as this video of ABB Robotic’s YuMi  demonstrates.

Robotics companies are also integrating other advanced technologies like 3D vision into their robots to help them complete tasks like unpacking pallets of merchandise. The heavy-payload CR-35iA co-bot by FANUC is one instance of this, but a human operator also stands by to guide the robot, but no longer has to do the dangerous and repetitive job of heavy lifting.

It looks like it’s only going to go up from here: according to market research firm ABI, the co-bot industry is projected to grow from $95 million in 2015 to $1 billion by 2020. The next-generation designs of these collaborative robots means they are poised to bust out of the confines of manufacturing to assist humans in places like hospitals, research laboratories, offices, homes and warehouses, and for tasks like automated assembly of electronics, packaging, handling materials, organization, inspection and more — all in close proximity to people.

While there is understandable concern that this may mean a loss of jobs for humans, the positive aspect is that these robots will no doubt end up undertaking dirty, dumb or dangerous jobs that aren’t the best use of human potential anyway. New roles for humans will be created, like robot inspection and supervision. “We’re starting to see robot supervisors, where their job is to orchestrate and oversee robots’ tasks on a daily basis,” says Jim Lawton, chief product and marketing officer at Rethink Robotics. Either way, collaborative robots will redefine what we think of work, and how it gets done in the next few years.

SHARE THIS STORY
RELATED STORIES
Golden Paths Start with a Shift Left SRE Housekeeping: Where to Get Started for New Hires The Power and Ethical Dilemma of AI Image Generation Models Wellspring of Creativity: Why Public Domain Matters How We Manage Incident Response at Honeycomb
SHARE THIS STORY
RELATED STORIES
Why Your Code Sucks: Common Excuses for Bad Programming Watch Out, Attackers Have Their Heads in Your Cloud! Snack Stack: Turning Winter Comfort Food up to 11 A Brief DevOps History: The Road to CI/CD How We Manage Incident Response at Honeycomb
THE NEW STACK UPDATE A newsletter digest of the week’s most important stories & analyses.
The New stack does not sell your information or share it with unaffiliated third parties. By continuing, you agree to our Terms of Use and Privacy Policy.