Coming in September: The Banana Phone 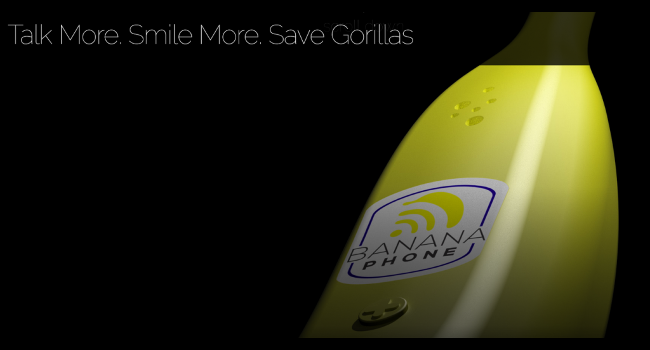 It sounds like a bad vaudeville skit, but it’s really happening. There’s now an Indiegogo campaign to manufacture the world’s very first batch of banana phones.

In a promotional video, the originators of the San Francisco-based Banana Phone project assures you that they really are funding the manufacturing of “a Bluetooth-enabled mobile handset that connects to your smartphone so you can talk to your friends and family. On a banana.”

Their video also takes a look at the inauspiciously-named Banana Labs, where “We’ve engineered a robust banana handset with you in mind,” the promotional material reads.

“Show the world your wild side — and that you stand for endangered mountain gorillas.”

Yes, in a stroke of marketing genius, Banana Phone has also already arranged for 1 percent of their sales to go to Gearing Up 4 Gorillas, a non-profit that protects the rare mountain gorilla in the eastern Democratic Republic Congo. 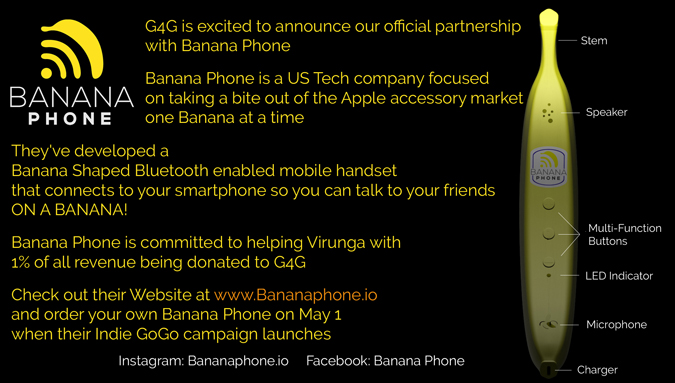 The official site for Gearing Up 4 Gorilla now acknowledges its new internet benefactors on its home page, with a shout-out to “a U.S. tech company focused on taking a bite out of the Apple accessory market.”

But as much fun as it is to say “banana phone,” let’s take a look at the device. The campaign’s page describes it as “a beautifully designed mobile handset that wirelessly connects to your smartphone.” And of course, it’s shaped like a banana…

The first thing you notice is there’s no touchpad (because it’s a banana!). It’s voice-enabled, summoning Siri or Google Assistant (through its Bluetooth connection) to complete the call on your smartphone. It can idle for up to 70 hours without a recharge — there’s actually a USB charging port built into the bottom of the banana. An ear-level speaker and a mouth-level microphone are built into the banana’s inner side, and the other buttons are apparently a volume control and a “home” button which answers (or initiates) a phone call.

The whole contraption will be made from “environmentally conscious” recycled plastic, and in just four months — sometime this September — Banana Labs expect to begin shipping them. “We’ve now selected our manufacturer of choice and have vetted their ability to deliver high-quality Banana Phones in a timely manner,” reports their Indiegogo page.

So who is behind Banana Labs? One member of the management team is a senior account manager for Visa Inc. Brian Brunsing specializes in global e-commerce payments (and is “a major Banana enthusiast.”) Founder and Chief Technology Officer Charlie Katrycz and is a former artist in residency at AutoDesk (and also an “incredibly big fan of bananas.”) And CEO Max Brown is the director of sales for Garrett Leather. And — of course — a “gigantic supporter of all things bananas.”

In their promotional video, he’s the one wearing fake gorilla-paw gloves…

The three have been best friends for 15 years — they all worked in Ontario, Canada as guides for canoe trips, according to the campaign page. But it’s important to remember that they’re serious about bringing their product to market. “Over the last 5 months, we’ve worked with 10 manufacturers, reviewed proposals from 7, and received fully functional prototypes from 3.”

It’s the kind of crazy passion that the internet seems to love. Four days into the campaign, Banana Phone had already raised $12,000, reaching 40 percent of its funding goal. It’s a “flexible goal” campaign — so it doesn’t have to reach its $30,000 goal to receive funds. But by Thursday Banana Phone had racked up over $23,000 in pre-orders — presumably helped by some prominent media coverage. The lure of writing about a Banana Phone proved irresistible to reporters at CNET, Mashable, The Verge, and even Food & Wine (“The next time your dad picks up a banana, puts it to his ear, answers ‘Hello?’ then hands it to you and says ‘it’s for you,’ you might want to reconsider rolling your eyes and take him seriously…”)

The campaign inevitably provoked some more silliness at Fark.com. “Clearly, we are still not near the promised pinnacle of phone technology,” joked one commenter — posting a picture of 1960s TV detective Maxwell Smart, talking into his shoe… Other posters shared a succession of tangentially-related banana videos:

The Indiegogo campaign succinctly describes the value proposition of a fruit-shaped phone: “Live a little! Banana Phones put smiles on faces and start great conversation.” But the campaign’s video suggests it’s also a great way to go back to a retro-world where a phone was only used for voice calls. “Are you sick and tired of push notifications, emails, text messages and Snapchats…?”

As the Indiegogo campaign puts it, “Use your voice, not your thumbs, and help us make talking cool again.”

For going to market with a banana-shaped phone, these entrepreneurs seem to have the right spirit. “From the beginning, this project has been outrageously fun, rewarding, and inspiring,” they conclude on their campaign page — adding one last pitch which sounds both enthusiastic and sincere.

“We’re incredibly excited to get a Banana Phone in your hands.”

SHARE THIS STORY
RELATED STORIES
Java's James Gosling on Fame, Freedom, Failure Modes and Fun 2023 Will Be the Year FinOps Shifts Left Toward Engineering Golden Paths Start with a Shift Left It Happened to Me: How I Suddenly Owed AWS $13,000... How We Manage Incident Response at Honeycomb
TNS owner Insight Partners is an investor in: Indiegogo.
SHARE THIS STORY
RELATED STORIES
How Will Working in Tech Change in 2023? Why Your Code Sucks: Common Excuses for Bad Programming The Power and Ethical Dilemma of AI Image Generation Models Java's James Gosling on Fame, Freedom, Failure Modes and Fun Snack Stack: Turning Winter Comfort Food up to 11
THE NEW STACK UPDATE A newsletter digest of the week’s most important stories & analyses.
The New stack does not sell your information or share it with unaffiliated third parties. By continuing, you agree to our Terms of Use and Privacy Policy.