Concern About ‘State’ Lessens as More Applications Use Stream Processing 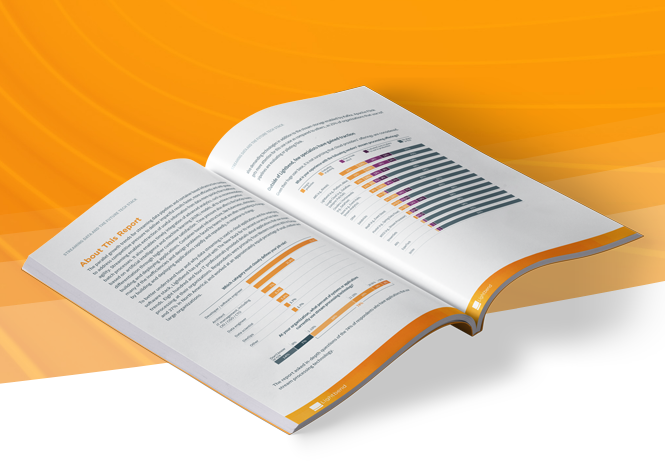 Persisting data in a microservices architecture becomes less of an issue as users gain more experience with containers, microservices and modern databases, according to a survey about stream processing conducted by The New Stack in partnership with Lightbend.

Let’s be clear, 68% of respondents said handling state is at least to some extent an obstacle to deploying more applications within microservices architectures. This is not a permanent barrier though, and many of the issues are mitigated once developers actually get experience with newer technology.

Source: Streaming Data and the Future Tech Stack. n=560. Fifty-eight percent of respondents use microservices in production. That figure jumps to 74% among those with more than a quarter of their applications utilizing stream processing.

Only 18% of respondents believe state is not at all an obstacle to microservices adoption. However, among those using streaming in more than half of their applications, 41% say state is not at all an obstacle. This is because advanced users of stream processing are using design patterns and databases that are better able to handle data in movement. In other words, new applications designed so that they can utilize both batch and real-time data processing are less likely to have problems with state management.

Many concerns about handling persistent storage are due to existing applications being designed for older databases and architecture. Users of modern data stores like Cassandra, MongoDB and Redis are less likely to believe state is inhibiting adoption of microservices. Since 71% of respondents were extremely or somewhat comfortable with refactoring an application for microservices, connecting new stream processing use cases to these cloud-native databases should not be a problem. 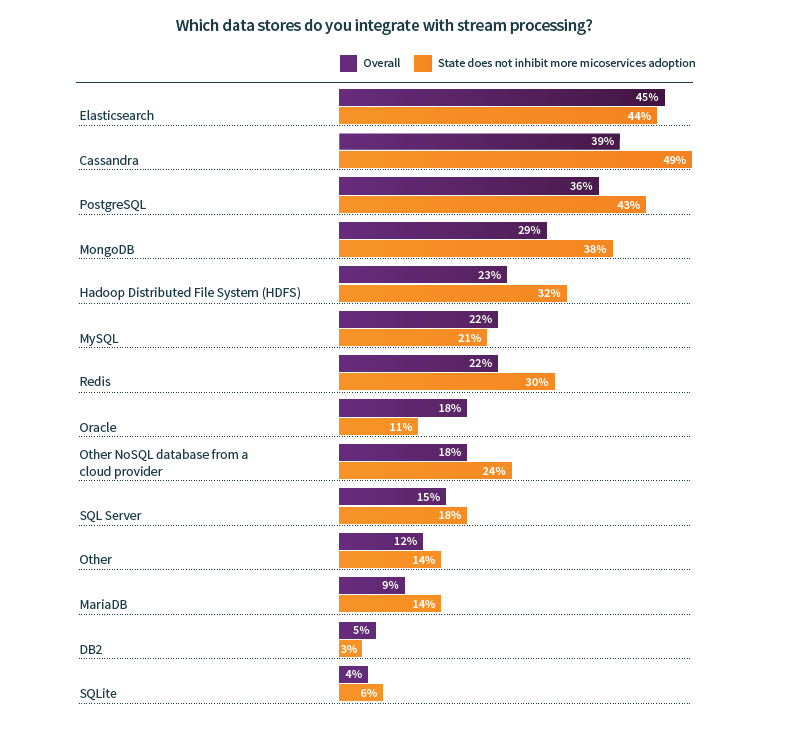 Source: Streaming Data and the Future Tech Stack. n=342. Elasticsearch and Cassandra are central to current stream processing use cases.

In 2018, we reported that usage of Kafka to preserve and communicate state microservices architectures had risen dramatically, at least according to a survey of Kafka users. In 2019, we just narrowed the focus of the question so that Kafka’s core storage and messaging capabilities were distinguishable from its streaming engine. Using this approach, we found that early adopters of some stream processing technologies are more likely to be troubled by state. Among those that think state is greatly inhibiting further microservices adoption, production-level adoption of Apache Kafka, Apache Spark Streaming and Elasticsearch was on average 36% higher than the sample as a whole.

People who did not use the right tools to address the right problems are a reason why persisting state continues to be cited as a concern. However, these concerns appear to abate as the adoption of new design patterns associated with stream processing and modern databases take hold.

More Data from the Report

Lawrence has generated actionable insights and reports about enterprise IT B2B markets and technology policy issues for almost 25 years. He regularly works with clients to develop and analyze studies about open source ecosystems. In addition to his consulting work,...
Read more from Lawrence E Hecht
SHARE THIS STORY
RELATED STORIES
Choosing the Right Container Native Storage for AWS Public Cloud Platform Engineering Won’t Kill the DevOps Star Kubernetes Needs to Take a Lesson from Portainer on Ease-of-Use Kinsing Malware Targets Kubernetes What Trouble Awaits Cloud Native Security in 2023?
TNS owner Insight Partners is an investor in: The New Stack.
SHARE THIS STORY
RELATED STORIES
What LaunchDarkly Learned from 'Eating Its Own Dog Food' Why CIEM Plays a Key Role in Your Cloud Security Strategy Data, Analytics and AI: What Will Happen in 2023 Entrepreneurship for Engineers: Building for Customers’ Love Choosing the Right Container Native Storage for AWS Public Cloud
THE NEW STACK UPDATE A newsletter digest of the week’s most important stories & analyses.
The New stack does not sell your information or share it with unaffiliated third parties. By continuing, you agree to our Terms of Use and Privacy Policy.