Confluent has added a number of new features to its platform for its Confluent Q2 ‘22 cloud bundle release, including enhanced role-based access control (RBAC) and Grafana-metrics support.
May 5th, 2022 6:50am by B. Cameron Gain

Confluent has added a number of new features to its platform for its Confluent Q2 ‘22 cloud bundle release, including enhanced role-based access control (RBAC) and Grafana-metrics support. The release represents its latest effort to expand on data streaming support and services built on open source Kafka for organizations requiring streaming to maintain real- or near real-time access to data at scale. These organizations also often rely on in-cache memory to improve data-connection latency and the use of a shared data layer that is continually refreshed as the data associated with distributed systems of records is updated (a process also described as change data capture (CDC)). 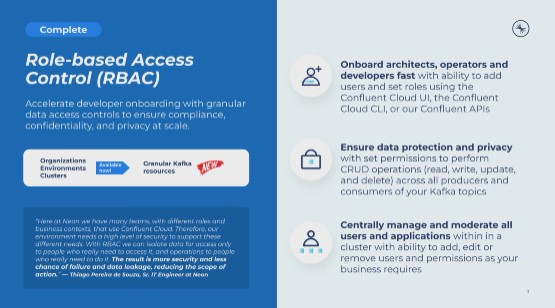 Confluent’s RBAC control for individual Kafka resources now extends to Kafka topics (which describe the different data systems of record), consumer groups and transactional IDs. While this tighter RBAC control for onboarding can always be done manually, the process of ensuring the right users have access to the right data “all the way down to individual Apache Kafka topics requires time and resources that most enterprises don’t have,” Dan Rosanova, head of product for Confluent Cloud, told The New Stack. Enterprises can set clear roles for those accessing data giving them visibility into only those areas specifically required for their work with the new RBAC capability.

Beyond helping to solve the challenges associated with access control when scaling databases, RBAC also enables organizations to quickly onboard development teams and hand over the responsibility of managing specific Kafka resources to them, Rosanova said. “This ensures that Kafka resources are managed by the true owners, which was very complex to manage in the past due to the complicated scripts that needed to be written,” Rosanova said.

Other streaming capabilities on offer include:

These and other enhancements Confluent is developing for the future are part of its mission to rebuild its offerings in the cloud to make them “truly cloud native,” Rosanova said. “This has resulted in many enterprises starting their data streaming journey in Confluent Cloud, and existing customers adopting Confluent to manage hybrid and multicloud environments,” Rosanova said. “Having a consistent experience across cloud provides with all the security and manageability that enterprises need makes Confluent the base option around.”

Confluent also has not changed its bet that streaming and, especially, services built for streaming that are based on Kafka, will play a key role in the development of CDC in the future, as organizations seek to scale their databases and operations dependent on them, often across disparate geographical zones.

“We believe data streaming is at the center of the next major wave of technology innovation companies are undergoing,” Rosanova said. “The ability to harness it will be a key factor in determining the competitiveness of every company, especially as real-time experiences and operations become table stakes. Open source Apache Kafka started with movement, and saw tremendous adoption with over 80% of the Fortune 100.”

For organizations that are just getting started with streaming, adoption usually begins with a single-use case that harnesses streams of data using open source, Rosanova said.  However, a key aspect of this platform is that these data streams are meant to be shared, and these streams attract new applications.

“This is a virtuous cycle that drives the adoption of the platform: apps bring streams, which, in turn, attract more apps. As use cases grow, the cost and time associated with managing Kafka increases too,” Rosanova said. “For organizations that want to offload the operational burden, we offer a fully managed Kafka service. We provide streaming ‘as a service’ that doesn’t require you to learn about the underlying infrastructure. Instead, you can focus on the data and the value you derive from it.”

BC Gain’s obsession with computers began when he hacked a Space Invaders console to play all day for 25 cents at the local video arcade in the early 1980s. He then started writing code for very elementary games on the...
Read more from B. Cameron Gain
SHARE THIS STORY
RELATED STORIES
Data 2023 Outlook: Rethink the Modern Data Stack Data, Analytics and AI: What Will Happen in 2023 AWS Inf2: A 12-Chip System for Large-Scale ML Production Wix Tackles Application-Level Security with Custom Detector Why Trust and Autonomy Matter for Cloud Optimization
Confluent, AWS, Oracle and InfluxData are sponsors of The New Stack.
TNS owner Insight Partners is an investor in: The New Stack.
SHARE THIS STORY
RELATED STORIES
It Happened to Me: How I Suddenly Owed AWS $13,000... Why Trust and Autonomy Matter for Cloud Optimization Data 2023 Outlook: Rethink the Modern Data Stack It Doesn’t Matter How Much You Spend on AWS Serverless vs. Kubernetes: The People's Vote
THE NEW STACK UPDATE A newsletter digest of the week’s most important stories & analyses.
The New stack does not sell your information or share it with unaffiliated third parties. By continuing, you agree to our Terms of Use and Privacy Policy.