Does the Container Ecosystem Need a Map? 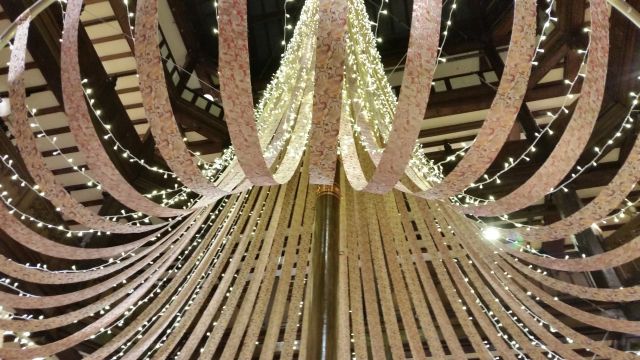 At last month’s KubeCon in Seattle, members of the Cloud Native Computing Foundation put forth a chart depicting the various projects, both commercial and open source, that either individually or collectively contributed to its perception of the “cloud native” ecosystem. You might call it, for lack of a more original phrase, a new stack.

It’s being called the Cloud Native Landscape (CNL), its version number of 0.9.2 suggesting it’s close to finished, but not quite. It looks like a chart one might print up of the various vendors at a gaming conference, or of the vendor charts at one of the early computer shows. Remember when hotel meeting rooms were divided into aisles, and the first software developers shouted over one another to get attention?

Or, as Alexis Richardson — the CEO of WeaveWorks, the chairman of the CNCF’s Technical Oversight Committee, and a long-time friend of this publication — described it for us, it’s like a shopping mall directory. 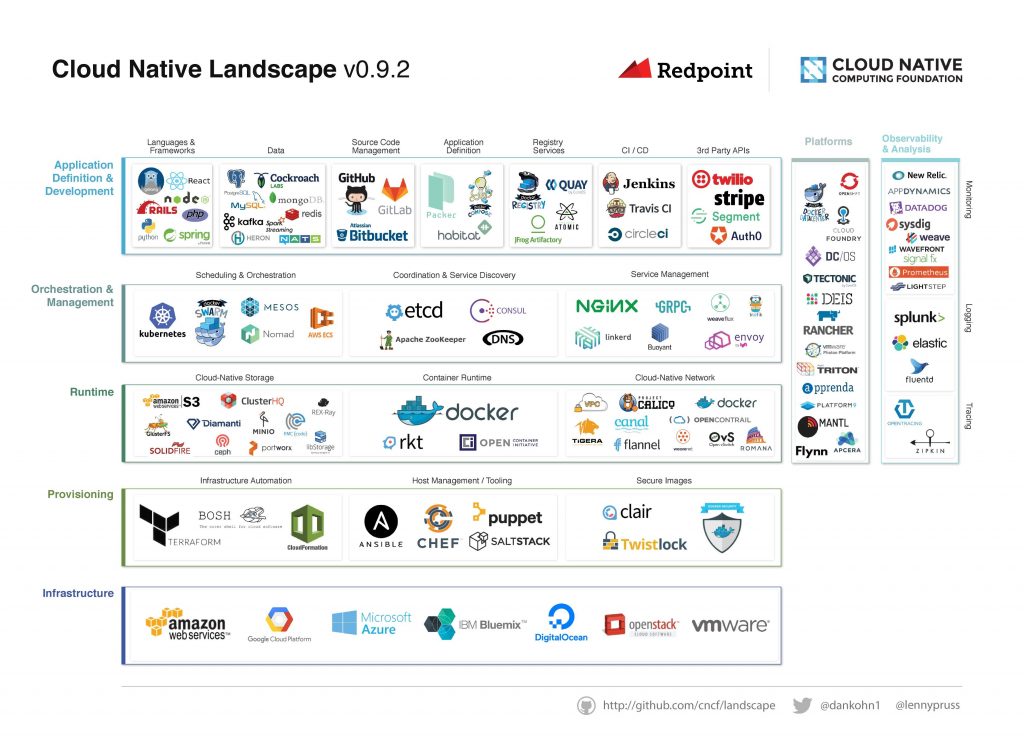 “When you walk into a superstore, like a Macy’s — which has seven or eight floors, all selling you lots of goods,” said Richardson, “you often gravitate towards the map, and it shows you what’s available on each floor.”

There’s a sense of delight, certainly at first, in seeing how many different projects pertain to this new realm of computing. It gives one hope for the future of this industry, similar to what a new crop of contenders would bring to a certain governmental institution were people bold enough to send them there. It denotes a sense of activity and growth, and speaks of a certain underlying ambition to achieve something great. If you’re a developer in the containerization space, it’s a place where all your friends have been invited.

But then reality, as it has a tendency to do, sets in. You notice that there’s a place for everything, and everything in its place. One real-life example of inviting everyone’s friends into the same room is a wedding reception. If you’ve had one yourself, then you know the unspoken purpose of seating charts. It’s the tool you use to bring everyone you love together in one place, but ensure that they all like one another once they leave.

No, Better Yet, You’re Over Here

Everything has its place in the CNL chart. That’s why there are multiple versions — because the places are still being sorted out. And it’s in deciphering the strategy behind that sorting that one begins to wonder if there’s a subtle message.

“I think the goal with this project was fundamentally to help guide the conversation,” stated Lenny Pruss, a principal at Redpoint Ventures. His VC firm partnered with the CNCF in producing the chart, in large part because it’s looking to introduce startup firms into the cloud-native ecosystem — to find a place for them to grow and thrive.

To guide that conversation, Pruss continued, the CNL will “help establish some more rigid taxonomies of where some of these products and projects might lie, and what they’re most closely associated with.”

So there is a logic to the seating arrangement, beyond just gathering everyone in one place. It’s not just a building directory, like you’d find on the ground floor of an office building. If drafting the CNL chart were as simple as finding the right logos to go with the project names, it wouldn’t need a version number. Unless, as may be the case with any wedding reception planned simultaneously by agents of the bride and groom, there’s more than one voice arguing in favor of who goes where.

Pruss acknowledged that some project leaders and vendors may make valid arguments that their work spans multiple categories. (Indeed, Docker’s various logos appear multiple places in the CNL.) But perhaps the subtle message here is that no single project should emerge as the “center of gravity” in this ecosystem — that each project is a planet unto itself.

Am I right, Alexis Richardson? Apparently not.

“I think that’s a false dichotomy, Scott,” he told me. “Everybody’s entitled to put themselves at the center of their own universe. In some sort of Cartesian sense, that’s true of everybody,” he continued, probably fully aware of to whom he was speaking.

“We have to have one center of one picture, for there to be a landscape. In this picture, we put containers at the center. So anybody who has a container-based platform can argue that they are aligned with that, and they can put themselves next to them in the middle, if they want to.”

There’s a special grouping of sorts along the right side, which I’ll call the “bench,” where multiple-component platforms are specially listed. Vendors will undoubtedly continue to make the argument that their platforms span all these categories, and that their respective ecosystems do revolve around them. Rather than contest those viewpoints, the CNL makes its own case that platforms exist and should be acknowledged, but their respective bases form individual points in this constellation, just as much as any startup project. If there’s a case to be made that they can consume more space than others, perhaps they belong on the bench.

Let’s See, You Were Over There

The term “ecosystem” was first applied to computer software in the late 1970s, as a way of portraying the curious phenomenon triggered by the popularity of the Apple II. A group of tinkerers — some of them circuit board makers, others the first independent software developers — began packaging, selling, and supporting their own products, as part of a self-supporting community that appreciated the support of Apple Computer, but did not require it. I first heard the term uttered in that context during a computer conference, by someone outside of the Apple community who was seeking guidance as to how and why it worked the way it did.

Having been an editor at various points of my career, I’ve been very selective in my use of the word “ecosystem,” and in other projects that I’ve led, fairly strict as to how my authors should use it. Like a real ecosystem, I’ve professed, an ecosystem in computing is self-sustaining and self-nurturing, even when elements of that system compete with one another. Like in the real thing, the members of a computing ecosystem have a natural leader, but are not solely dependent on that leader for their sustenance.  A leader may be a vendor, or a consortium of vendors, or a strong association of well-minded people.

In the open source community, a leader can be assembled artificially. Though as the Linux Foundation knows full well, that’s an extremely difficult task that doesn’t always yield results.

Tell You What: How About You Sit Here for Now

Indeed, the CNCF has been recognized as the organized body of leaders in the Kubernetes space, especially as the co-proprietors of KubeCon. So one might think that the CNL might be a subtle mechanism to curb the influence of Docker, to give the progenitor of this space the best seat in the house but also make sure it stays there — and in so doing, making sure Kubernetes keeps a clear space for itself.

Am I right, Alexis Richardson?

“This chart is not trying to privilege one element in a box over others,” he told me rather emphatically.

“Let’s say that a company like Amazon released a new open source project today, and called it, ‘Amazon Orchestration for Containers.’ We would put it in the Orchestration box. That does not mean that it is of equal adoption to Kubernetes or Docker Swarm. It just means that the core responsibility of Kubernetes and Docker Swarm, and this potential other project, are focused on one set of features: scheduling and orchestration.

“So it would be wrong to say,” Richardson went on, “just because Kubernetes has more users than a new project, it should have a bigger icon. That’s not the intention of the Landscape. The Landscape is to help you navigate the ecosystem.”

“Ultimately, this chart helps to ground and define the conversation,” remarked Redpoint’s Pruss. “But I would advise companies to use caution in thinking of it as a foundation of how they should map their strategies.

“In general, what we’re seeing is, the stack is sliced-and-diced, with many components and many layers. The business value and the technological value you’re bringing forward today is thin, or it’s thinner than what it may have been in a monolithic app world, where you’ve got your database from one vendor, your servers from another, your networking gear from another. That world doesn’t really exist today. So how we invite companies to think is to think strategically about, what is the day-zero problem they solve, and then what are the adjacent problems that they can go on to solve tomorrow?”

The message Pruss believes the Cloud Native Landscape chart sends boils down to this: As a startup, you can find your place in the seating arrangement. The other players will welcome you and not shove you to one side. You can contribute just as much to the new industry of cloud-native computing as anyone else, regardless of how long it’s been established.

That’s a wonderful ideal to aspire to. It’s the goal of every successful wedding reception: to make every family member feel welcome and important. The subsidiary goal of that is to set aside everyone’s passive-aggressive arguments and plays for superiority and dominance, at least for now. On this chart, everyone is equal, especially those who insist they’re not.

CNCF is a sponsor of The New Stack. Intel sponsored this story.

Title image of a Christmas display through the stairwell of Liberty’s of London, December 2015, by Scott M. Fulton, III.