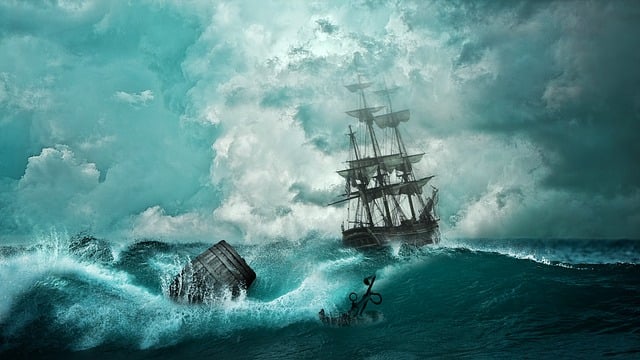 Should the Docker container image format be completely standardized? Or should Docker not be held back from evolving the format ahead of the open specification? This was the topic of a heated Twitter tussle last week between Google evangelist Kelsey Hightower and the creator of the Docker itself, Solomon Hykes.

Hightower wants to see the Docker format image be completely standardized, so companies, including Docker, can build additional functionality atop of the specification. Hykes, however, balked at full standardization, asserting that the format is still too new and evolving too quickly.

The debate centers around how much Docker should donate of its container technology to the Open Container Initiative (OCI), an initiative to build a vendor-neutral container image and runtime specification. The image is the package, or the container itself, which users can fill with their apps. The runtime is the engine that runs the container, providing all the support of the underlying OS.

Last week’s release of Apache Mesos version 1 had seemingly kicked off the debate, when Hightower, commenting on the release, wondered which company was the first to release third-party software that could run Docker containers (Joyent was, he later reported).

Ideally, he argued through Twitter, running a container image should not be limited to any specific runtime. “The Docker Image format has been a great unifier in the container space, but will only reach its maximum potential if they can run anywhere,” he wrote.

Hykes then chimed in, in a series of Tweets that any third-party companies that claim to support the Docker container format only offer a subset of the full capabilities, and that users relying on these third-party applications may have some functionality go missing. 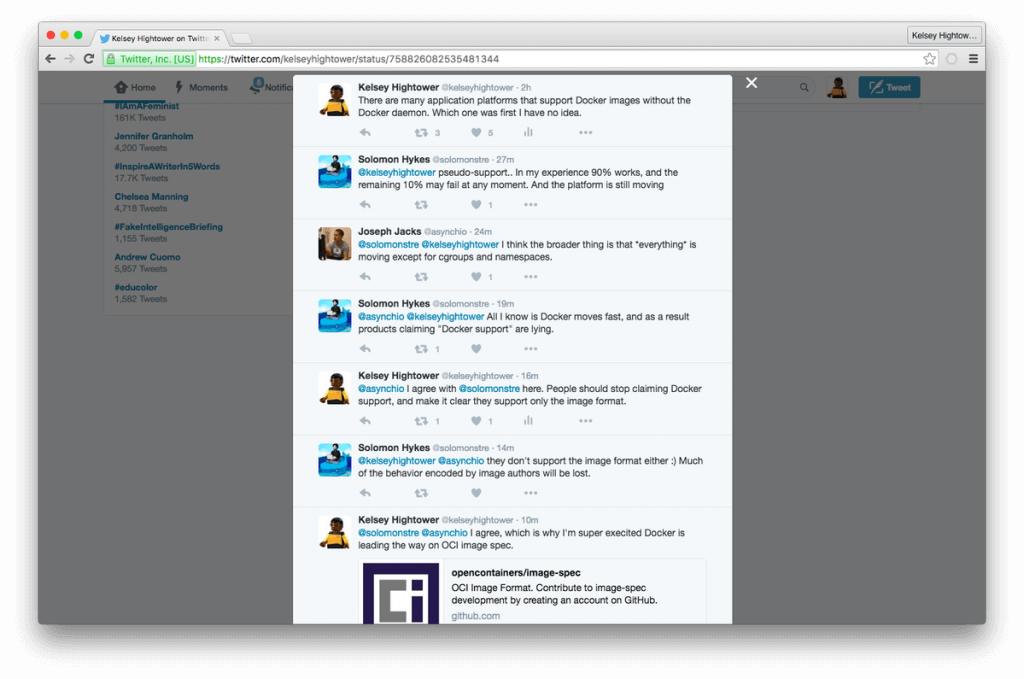 Hykes also dismissed the OCI container format as a “fake standard,” one that, at best, could only act as an intermediate format. To Hightower, this was a surprising admission given that to date, Docker has supported the OCI work, and has been public in doing so. But Docker is iterating on the Docker format so quickly that standardizing the work would slow innovation, Hykes argued. 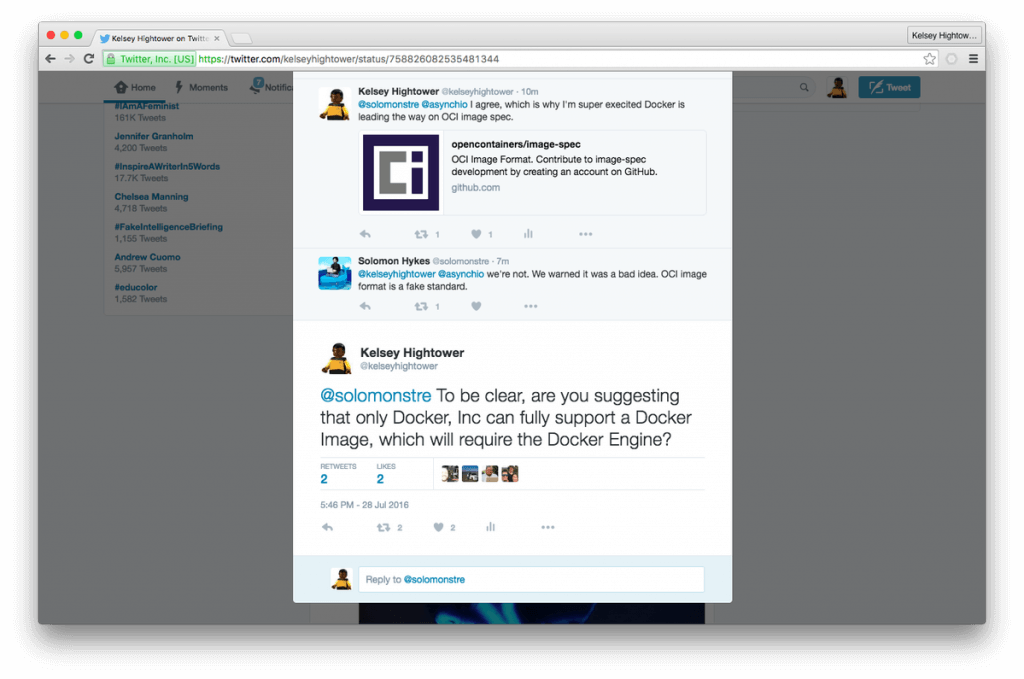 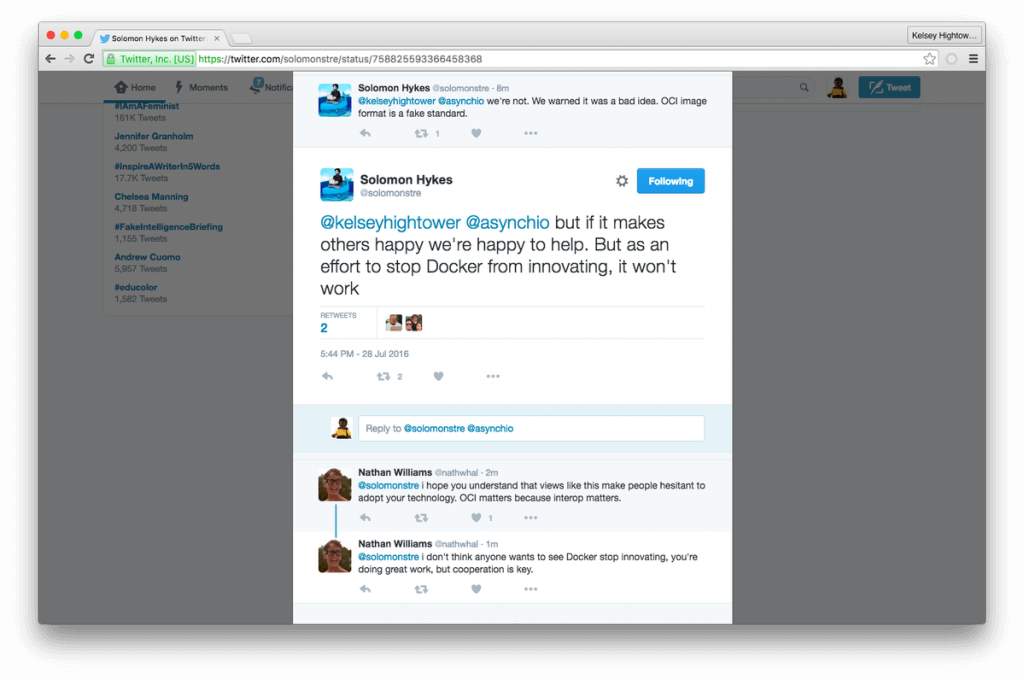 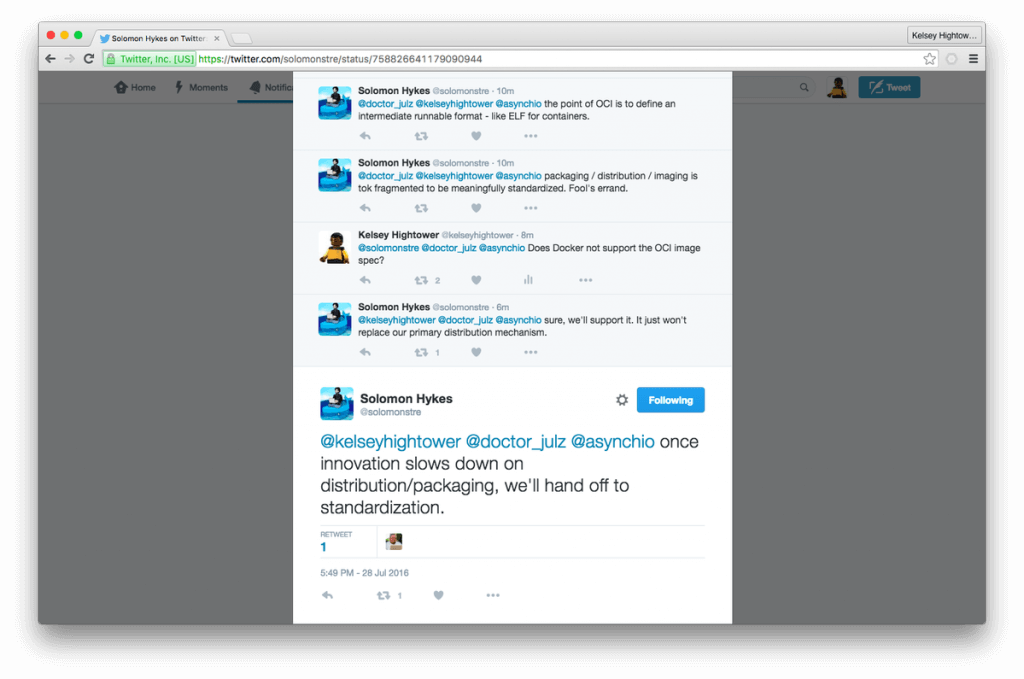 The response appeared to disappoint Hightower, “I’ll always give credit to Docker for bringing containers to the masses, but it worries me that a single person wants this much control,” he wrote after the Twitter exchange,

The problem is third-party vendors building on top of the Docker are left to work with incomplete standards.

“At the time most people sought to build on top of Docker, they didn’t necessarily have all these features like service discovery, cluster management. A lot of the stuff wasn’t there. It felt like, at the time, Docker was the common denominator,” Hightower said, in a subsequent interview on the Cloudcast podcast. “All the interesting things would be built on top.”

Although Hightower stipulated on Twitter that he was not talking on behalf of his employer, Google, where he works as an evangelist for a number of Google open source technologies, including the Go language and Kubernetes, a container orchestration tool that supports the Docker format. Google released Kubernetes to encourage large-scale work with containers, in part to encourage the use of Google own cloud Kubernetes-based container-based cloud platform.

Cloudcast host Brian Gracely warned in the episode that if Docker too closely controlled the image, it could very well resemble VMware’s control of its virtual machine format, limiting third-party vendors to supplying only auxiliary tools. Some work was done to standardize a VM format, in the Open Virtualization Format (OVF), though to date it has not been widely deployed.

“This thing we are asking everyone to package their apps in, the reason why no other platforms are attempting to build their image specs or container runtimes is because we are in belief that Docker and OCI will be that thing we can rally behind,” Hightower said in the podcast. ” If we can only get 90 percent there … then that opens a different conversation about what are going to do with that 10 percent, and what is that 10 percent.”

This uncertainty could be detrimental for the container format, the enterprise adoption of which appears to have stalled.

This is not a new issue. Even last year, CoreOS CEO Alex Polvi had publicly worried that the OCI image specification was far too narrowly defined. The issue was also discussed with Vincent Batts, Red Hat principal software engineer, in a TNS podcast recorded at OSCON earlier this year.