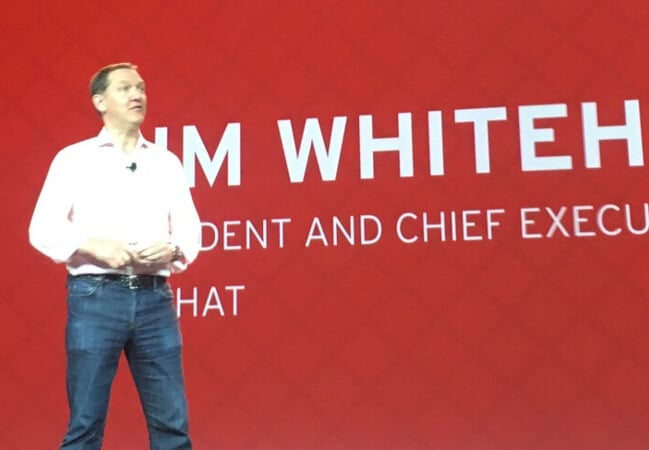 While containers are quickly becoming the new standard in many development pipelines, challenges remain to using them in production environments, according to Red Hat president and CEO Jim Whitehurst.

“With the recent bash buffer overflow bug, that impacted literally every container in production. Unless you have a Linux security response team that is fixing that, and you have capability to pull those containers, fix that bug and push it back out, you really don’t have a production grade container management system,” Whitehurst said, in an interview with The New Stack founder Alex Williams during Red Hat Summit 2016.

In this episode of the New Stack Makers podcast, Whitehurst noted that containers are going to be where the majority of where application development will be taking place in the future. And this means, aside from Windows-based containers, much of this activity will take place on Linux.

“Containers are a Linux phenomenon, but that doesn’t get over the fact that you still need someone to life cycle manage the kernel space which is the host and user space inside the container. That doesn’t mean there won’t be hundreds of competitors and innovations to solve components of that problem. I don’t see that as replacing Linux, it actually augments Linux and continues to make the ecosystem more effective and efficient.”

Whitehurst stressed that competing container formats could potentially be an issue, which Red Hat hopes to address via its participation in the Open Container Initiative. “In the container world, I think it’s pretty vibrant there. There’s great innovation,” he said.

“You frankly have the Potemkin village,” he said. “A vendor marketing consortium to basically talk about a set of technologies that really are vendor technology, nothing user-driven. Foundations have become kind of a marketing tool. There’s still a role for foundations around governance and code, but you have to split the wheat from the chaff there.”

SHARE THIS STORY
RELATED STORIES
Docker versus Kubernetes: Start Here 3 Ways an Internal Developer Portal Boosts Developer Productivity What Do 'Cloud Native' and 'Kubernetes' Even Mean? .NET 7 Simplifies Route from Code to Cloud for Developers Livin’ Kubernetes on the (Immutable) Edge with Kairos Project
TNS owner Insight Partners is an investor in: The New Stack.
SHARE THIS STORY
RELATED STORIES
What Do 'Cloud Native' and 'Kubernetes' Even Mean? How Paylocity Scaled Up Community in the Cloud with MongoDB Retrospective: Why Was Cloud Foundry at KubeCon? The Rise of the Kubernetes Native Database Do You Need a Managed Database?
THE NEW STACK UPDATE A newsletter digest of the week’s most important stories & analyses.
The New stack does not sell your information or share it with unaffiliated third parties. By continuing, you agree to our Terms of Use and Privacy Policy.