2016-05-11 07:49:27
From Containers to Container Orchestration
analysis,ebook3-automation-and-orchestration,

From Containers to Container Orchestration 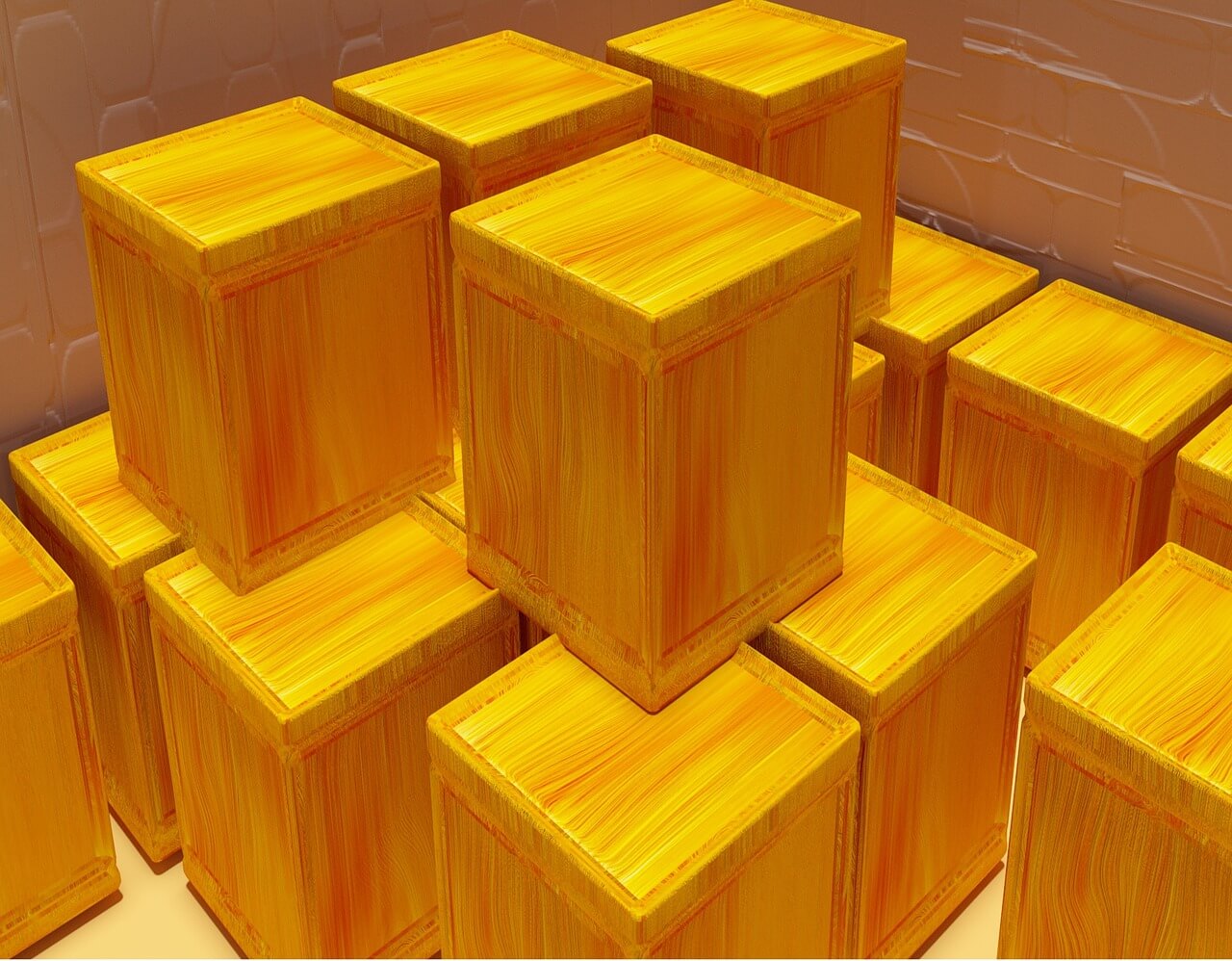 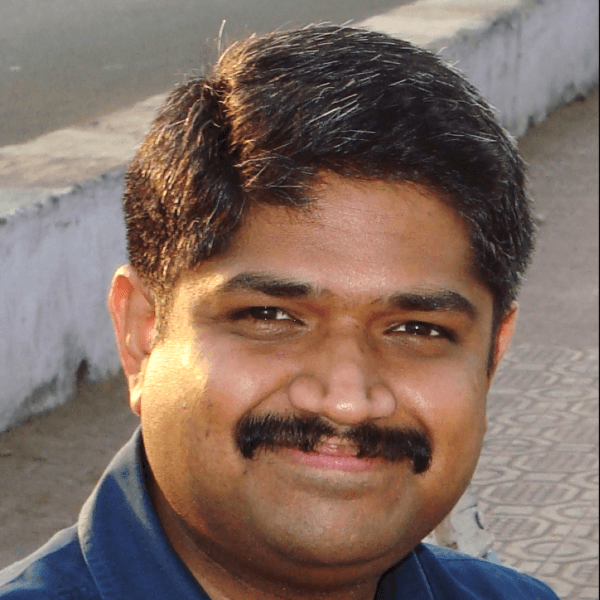 The Docker platform and surrounding ecosystem contain many tools to manage the lifecycle of a container. Just one example, Docker Command Line Interface (CLI) supports the following container activities:

While the CLI meets the needs of managing one container on one host, it falls short when it comes to managing multiple containers deployed on multiple hosts. To go beyond the management of individual containers, we must turn to orchestration tools.

By abstracting the host infrastructure, orchestration tools allow users to treat the entire cluster as a single deployment target.

The process of orchestration typically involves tooling that can automate all aspects of application management from initial placement, scheduling and deployment to steady-state activities such as update, deployment, update and health monitoring functions that support scaling and failover. These capabilities have come to characterize some of the core features users expectations offer modern container orchestration tools.

Orchestration tools provide an option for DevOps teams to declare the blueprint for an application workload and its configuration in a standard schema, using languages such as YAML or JSON. These definitions also carry crucial information about the repositories, networking (ports), storage (volumes) and logs that support the workload. This approach allows orchestration tools to apply the same configuration multiple times and always yield the same result on the target system.  It also allows the tools to accept different configurations for the same application during the various stages of development, testing and production for different target environments.

Workloads often have special policies or requirements for host placement, performance and high availability. For example, it’s pointless to provision the master and slave database container on the same host; it defeats the purpose. Similarly, it may be a good idea to place in-memory cache on the same host as the web server. Orchestration tools support mechanisms for defining the affinity and constraints of container placement.

Provisioning, or scheduling, deals with negotiating the placement of containers within the cluster and launching them. This process involves selecting an appropriate host based on the configuration. Apart from a container-provisioning API, orchestration tools will invoke the infrastructure APIs specific to the host environment.

The objective of Docker Swarm is to use the same Docker API that works with the core Docker Engine. Instead of targeting an API endpoint representing one Docker Engine, Swarm transparently deals with an endpoint associated with a pool of Docker Engines. The key advantage to this approach is that the existing tools and APIs will continue to work with a cluster in the same way they work with a single instance. Docker’s tooling/CLI and Compose are how developers create their applications, and therefore, they don’t have to be recoded to accommodate an orchestrator. 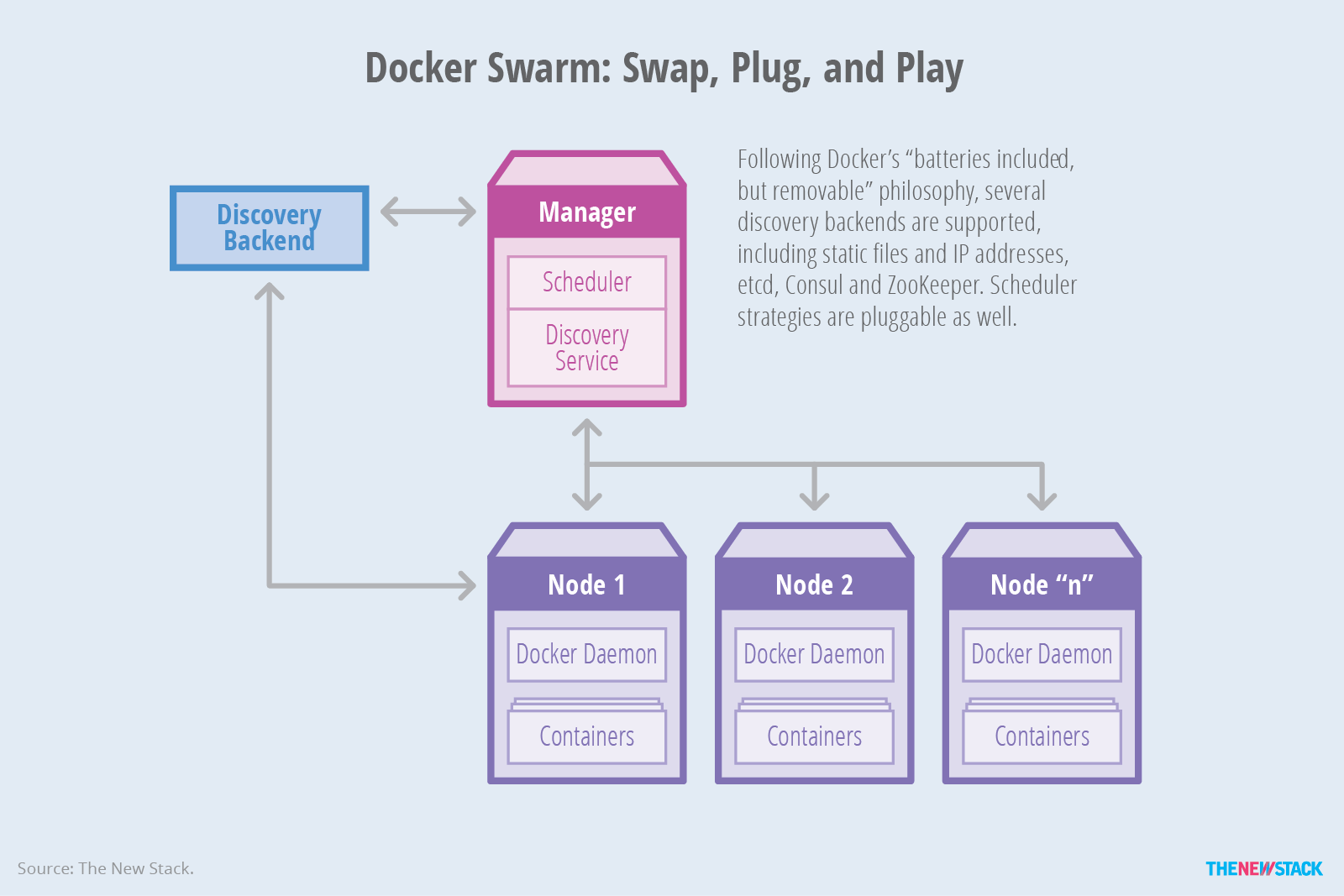 Docker Swarm comes with several built-in scheduling strategies, giving users the ability to guide container placement so as to maximize or minimize the spread of containers across the cluster. Random placement is supported as well.

Docker seeks to follow the principle of “batteries included but removable,” meaning that while it currently ships with only a handful of simple scheduling backends, in the future it may support additional backends through a pluggable interface. Based on the scale and complexity of a given use case, developers or operations staff might choose to plug in an appropriate alternative backend.

Docker Swarm supports constraints and affinities to determine the placement of containers on specific hosts. Constraints define requirements to select a subset of nodes that should be considered for scheduling. They can be based on attributes like storage type, geographic location, environment and kernel version. Affinity defines requirements to collocate containers on hosts.

For discovering containers on each host, Swarm uses a pluggable backend architecture that works with a simple hosted discovery service, static files, lists of IPs, etcd, Consul and ZooKeeper.

Coming from Google — a company that claims to deal with two billion containers every day — Kubernetes enjoys unique credibility. 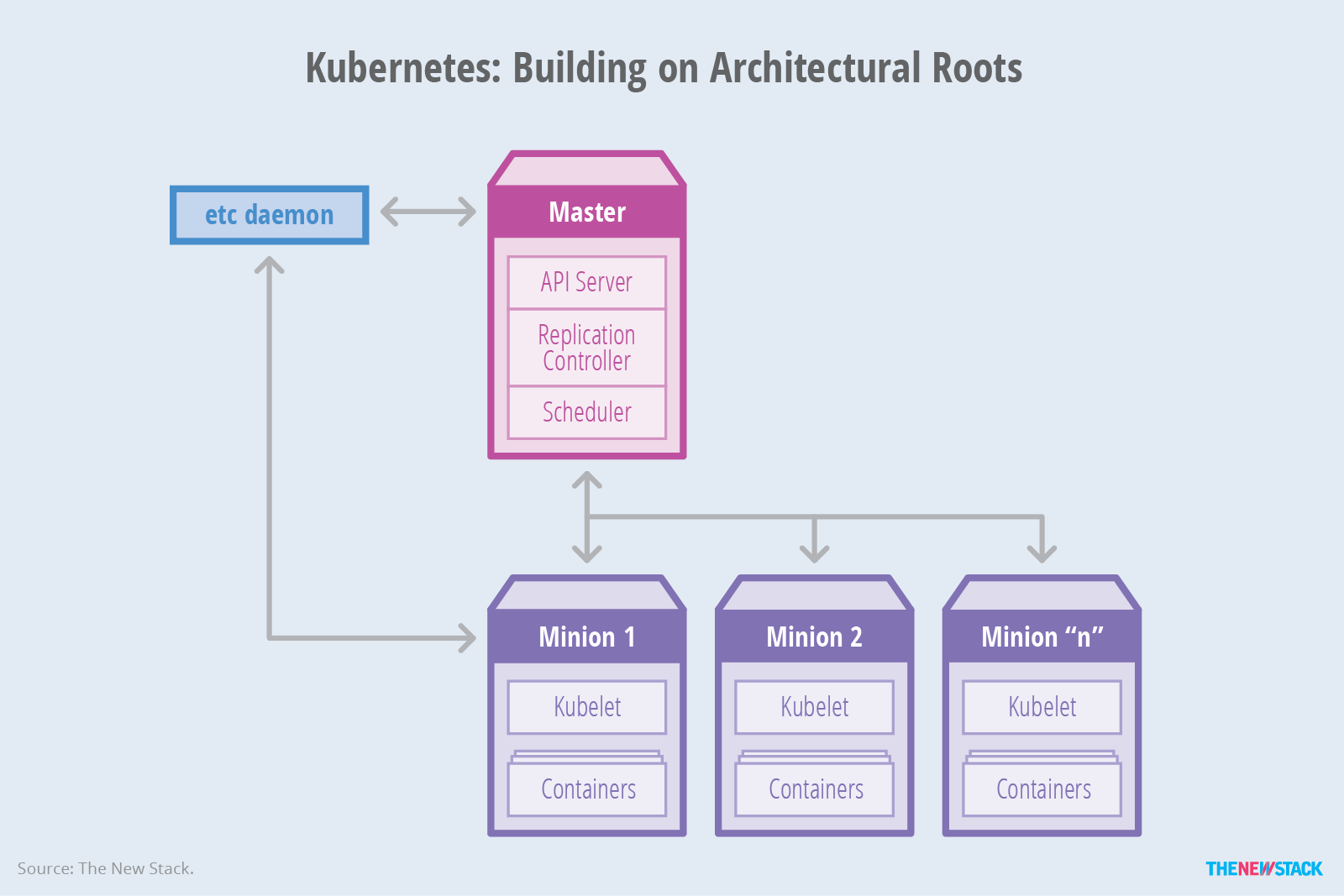 Kubernetes’ architecture is based on a master server with multiple minions. The command line tool, called kubecfg, connects to the API endpoint of the master to manage and orchestrate the minions. Below is the definition of each component that runs within the Kubernetes environment:

The service definition, along with the rules and constraints, is described in a JSON file. For service discovery, Kubernetes provides a stable IP address and DNS name that corresponds to a dynamic set of pods. When a container running in a Kubernetes pod connects to this address, the connection is forwarded by a local agent (called the kube-proxy) running on the source machine to one of the corresponding backend containers.

Apache Mesos is an open source cluster manager that simplifies the complexity of running tasks on a shared pool of servers. Originally designed to support high-performance computing workloads, Mesos added support for Docker in the 0.20.0 release. 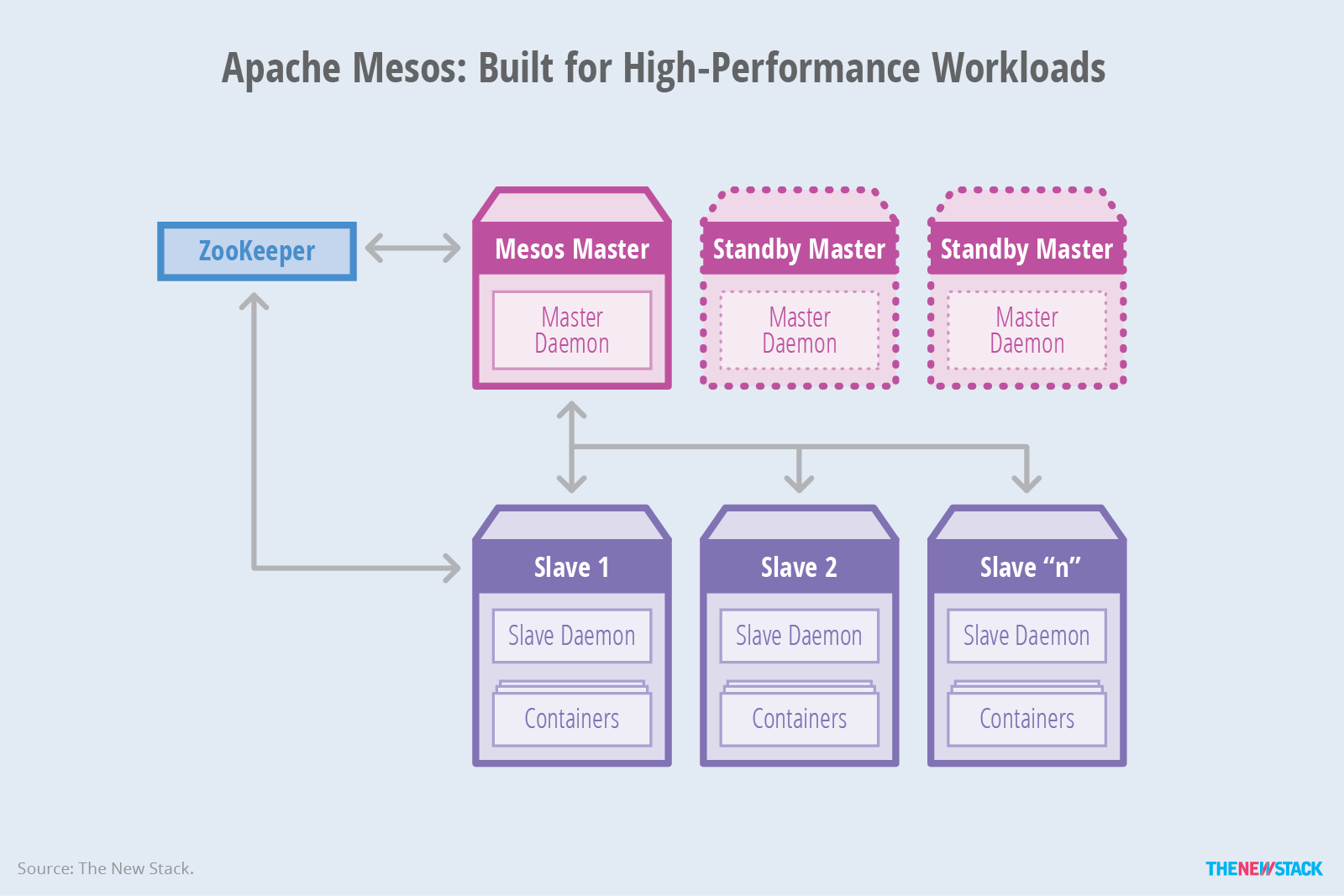 Unlike other tools, Mesos ensures high availability of the master nodes using Apache ZooKeeper, which replicates the masters to form a quorum. A high availability deployment requires at least three master nodes. All nodes in the system, including masters and slaves, communicate with ZooKeeper to determine which master is the current leading master. The leader performs health checks on all the slaves and proactively deactivates any that fail.

When Mesos is used in conjunction with Marathon, service discovery can be enabled based on the HAProxy TCP/HTTP load balancer, along with an assistant script that uses Marathon’s REST API to regenerate a HAProxy configuration file periodically. Alternatively, Mesos-DNS, a DNS-based service discovery mechanism, has recently been released in beta.

The container ecosystem is growing rapidly. From major infrastructure companies to PaaS vendors to early-stage startups and even in serverless computing, everyone is clamoring to stake out their place in the ecosystem. There are many contributors working on container orchestration tools, as these are essential for deploying real-world applications, thus driving the adoption of Docker and containers. We attempted to highlight some of the key contributors building orchestration tools, but there is more to it than just explicit orchestration tools — it’s also important to look at the build, deployment, CI/CD, PaaS, and other tools that orchestrators interact with, which we cover at great length in the Automation and Orchestration Directory. 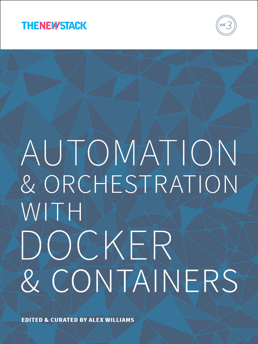