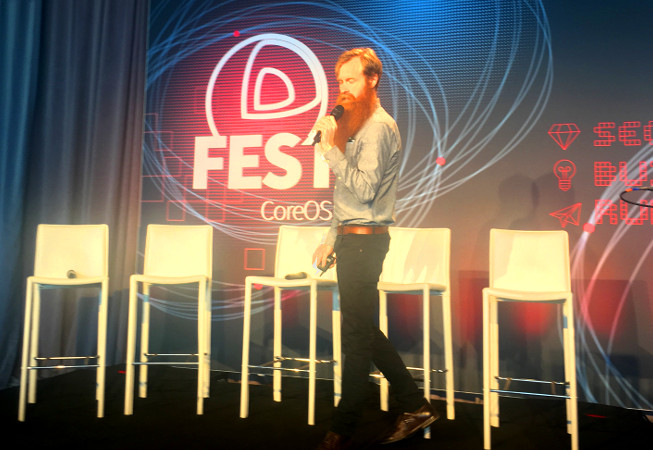 CoreOS wants to help the enterprise treat their cloud providers as commodity suppliers, with the help of the Kubernetes open source container orchestration software.

At the company’s CoreOS Fest user conference, being held this week in San Francisco, the company took the wraps off the latest version of Tectonic, its enterprise-ready distribution of the Kubernetes.

CoreOS is spinning up a new set of services, based on Tectonic, designed to help organizations use cloud services, without being locked into them. Instead of using provider-specific hooks, users can rely on Tectonic to manage operations. This approach would allow organizations to easily move their cloud-native workloads to whatever provider offers the best, or most cost-effective, service.

“We’re providing software that closes the gap between what running these things yourself would be like, and using a fully managed cloud service,” said Alex Polvi, CoreOS CEO. “Typically services are always tied to the hosting. But we are giving you both the choice and freedom of open source software, and also giving you what the cloud providers can offer around fully-managed services, but decoupled from the infrastructure.”

Over the past several years, enterprises have started voicing concerns about being locked into the services of cloud providers such as Amazon Web Services, Microsoft Azure or the Google Cloud Platform. Each platform offers a wealth of new features and utilities, though they require the end-user hard their operations into the specific feature, in effect making the application dependent on the specific cloud service.

About 71 percent of Kubernetes users are looking to the technology as a way to support multi-cloud or hybrid operations, a recent survey conducted by 451 Research on behalf of CoreOS had found.

CoreOS’ approach is different than just users themselves setting up Tectonic or Kubernetes; CoreOS will act as a service provider for the software, updating it, and troubleshooting issues should they arise. The only thing that CoreOS is not providing, Polvi explained, is the hosting: The compute and storage could be handled by any cloud provider, or in an in-house data center.

While the company is still a ways from offering a complete cloud package for Tectonic, CoreOS is prepping its software to make this happen.

As a first step, Tectonic 1.6.4 will offer the distributed etcd key-value data store as a fully managed cloud service. “It’s the logical one to offer first because it is everything else gets built on it,”  Polvi explained. The data store “guarantees that data is in a consistent state for very specific operations,” he said, referring to how etcd can be essential for operations such as database migrations.

Kubernetes is one of the fastest growing open source projects #CoreOSFest pic.twitter.com/S2NE5FfYha

“It’s pretty low-level but it is required to build any high-order distributed system. Things up-stack always need something like etcd in order to be done well,” Polvi said.

To render Kubernetes and its related components as services, CoreOS is relying on the Kubernetes Operators, an extension also developed by CoreOS that allows for Kubernetes to control the actions of applications. Released as a beta, the etcd Operator can be used to provision etcd, eliminating the need to manually scale, recover from failure, and update the software.

With these Operators, administrators can automate updates to the Kubernetes cluster control plane, worker node operating systems, and etcd service instances. “The Operators close the gap between you just deploying the software itself and actually turning it into a managed service,” Polvi explained.

Creating and viewing an etcd cluster in the Tectonic Console.

The etcd Operator is the first step in what will be multiple Operators covering all aspects of running Tectonic as a service, Polvi said. In addition, the company also released a Container Linux Operator, which automates updates to the CoreOS Linux distribution, run natively with Tectonic. CoreOS keeps Tectonic itself updated to the latest production version of upstream Kubernetes, which is managed by the Cloud Native Computing Foundation.

Polvi doubts customers will see any fiscal downsides or performance latencies on top of cloud provider services, rather than using the in-house services directly. Because of its open nature, the market for supporting open source software will be more competitive than that for proprietary cloud services, the prices for which tend to be locked by the providers, he asserted. Tectonic requires only raw the raw virtual machines from each provider, not any upstream services.

CoreOS Tectonic is free to use for up to 10 nodes and is priced per node for larger deployments. To learn more about the newest features, join CoreOS for a June 22 Webinar.

Share this story
RELATED STORIES
Getting Started with NoSQL and Java CDP One Takes Cloudera into the SaaS Analytics League How to Make SQL Easier to Understand, Test and Maintain A Way to Replicate Data at the Edge Low Code Versus Developer Freedom for Data Visualization
Share this story
RELATED STORIES
Nvidia Shaves up to 30% off Large Language Model Training Times Monitoring Air Quality with InfluxDB and Telegraf More Data Engineers Crave FAANG Jobs How to Cut through the Noise with Decision Intelligence Obtaining and Storing Time-Series Data with Python
THE NEW STACK UPDATE A newsletter digest of the week’s most important stories & analyses.
We don't sell or share your email. By continuing, you agree to our Terms of Use and Privacy Policy.