Corn-Tracking Robot May Save Us from Starving in the Future 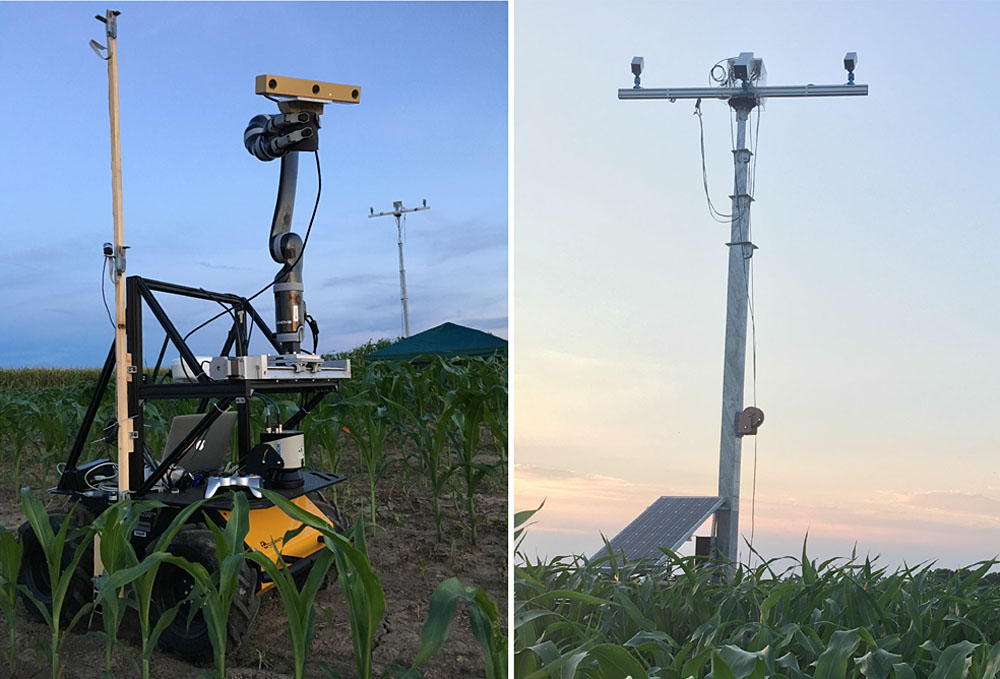 Can robots help save us from food shortages that have been brought on by changes to global climate? It’s hard to say, but we are already slowly coming around to the idea of having robots in almost every corner of life: industrial robots in our factories, collaborative robots in our offices, and even delivery robots roaming around our streets. So the concept of robot-assisted agriculture — or at least robot-aided agricultural research — isn’t that far-fetched.

With the aspirations of developing a drought-tolerant species of corn, researchers from the University of Missouri are using an autonomous robotic system to study how corn plants adapt to changing climatic conditions, such as hotter temperatures or reduced rainfall. Watch a video of this corn-watching bot in action:

The multidisciplinary team consisted of researchers from the university’s Vision-Guided and Intelligent Robotics (ViGIR) lab, its College of Agriculture, Food and Natural Resources, and the non-profit Danforth Plant Science Center. The team’s study, recently published in the journal Sensors, describes the development of Vinobot, an autonomous robot, and Vinoculer, a mobile observation tower, which work together in tandem to collect mass amounts of corn growth data in the field, both from individual plants, as well as the entire field as a whole.

One of the big advantages of such a robotic platform is that a lot more data can be gathered around the clock, compared to conventional methods of data collection like aerial monitoring. Researchers can also start up the system and download the information in the comfort and convenience of the lab. With the observation tower Vinoculer, which is equipped with a 360-degree robotic vision system, the team can identify specific areas of the field that might be affected by certain environmental or biological stresses, and send in the Vinobot for a closer look. 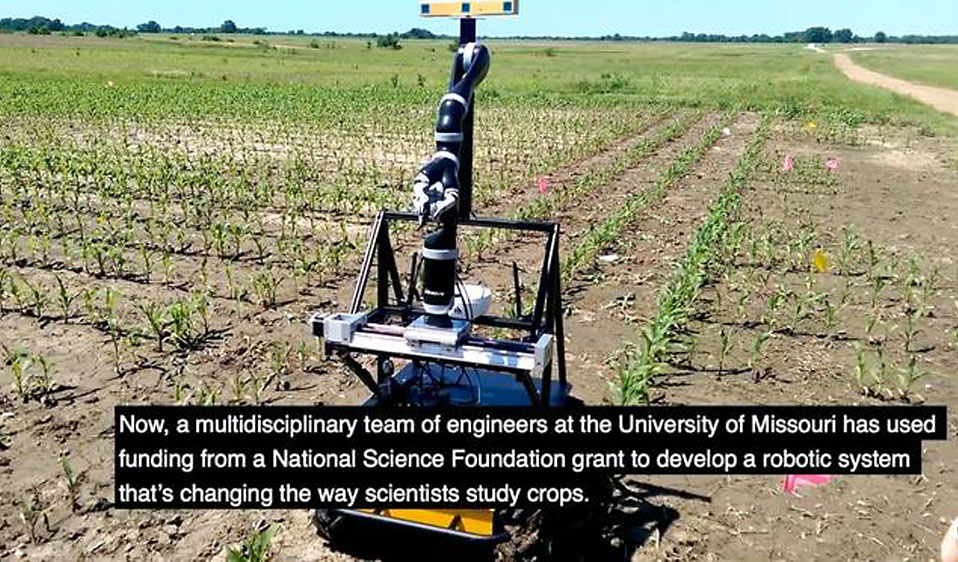 “Measurements taken from the tower alert us if any of the plants are under stress, such as heat or drought,” said Gui DeSouza, an associate professor of electrical engineering and computer science, who also heads the ViGIR lab. “The tower then signals the mobile robot, which we call the Vinobot, to go to a particular area of the field and perform data collection on the individual plants.

The Vinobot has three sets of sensors and a robotic arm to collect temperature, humidity and light intensity at three different heights on the corn plant. This is called plant phenotyping, which assesses growth, development, yield and items such as tolerance and resistance to environmental stressors by correlating these to physiology and shape of the plants.” 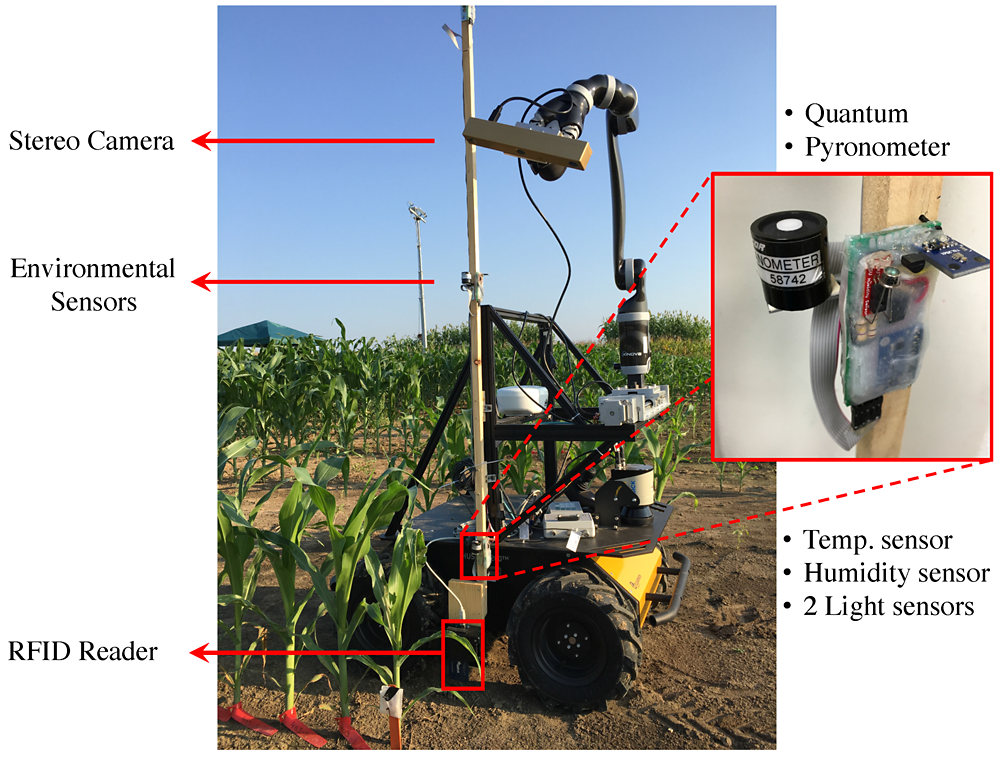 Phenotype refers to the combination of observable characteristics found in any living organism — in this case, plants — which are an expression of their genetic makeup but can be influenced by environmental factors like changing temperature or decreasing water levels. By monitoring these environmental factors and how they affect the plants’ growth, researchers are able to use that information to potentially develop hardier strains of staple food crops such as corn.

Of course, this kind of selective breeding is nothing new: it’s been practiced in agriculture for millennia by farmers, often through a slow process of trial and error in order to gradually enhance desired traits in plants. But with today’s digital tools and the incorporation of machine learning to help analyze the massive amount of data that’s collected, the process can be refined and made much more efficient. In addition, automated platforms such as the one covered in this study permit the gathering of information from either a selected part of one plant or a group of plants — something that regular aerial monitoring can’t do.

For DeSouza and his colleagues, the development of this robotic platform represents an extension of earlier research that focused on 3D imaging technology.

“I’ve been working with CAFNR assisting them in experiments where we helped to create 3D images of root growth in the laboratory,” DeSouza said. “Now, we’re creating robotics to assist in creating images of corn shoot growth out in the field.” 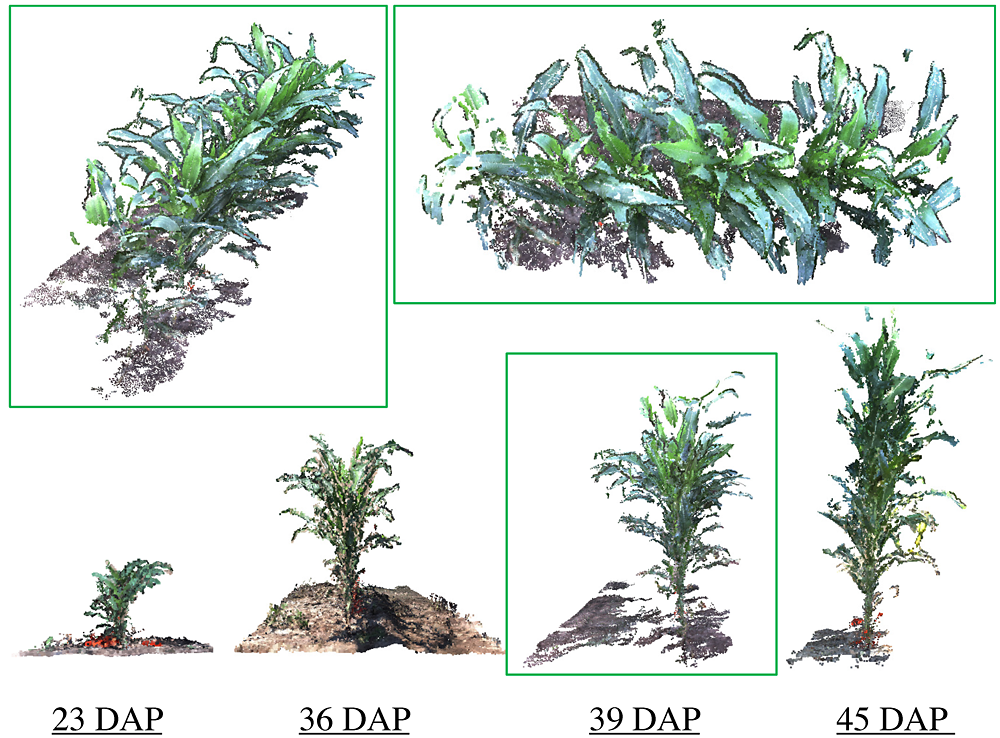 The Vinobot platform has a few big advantages over other automated field monitoring systems. Unlike its cousins, which often perform best in structured environments like a greenhouse, Vinobot and Vinoculer are designed to collect more data in the field while maximizing accuracy. The system’s architecture also minimizes cost and downtime, compared to similar but much more costly systems in the emerging agricultural automation industry.

While it may seem paradoxical that automation is now coming to one of the last few activities that still help connect humans to the land, it seems that the very real urgency of developing more resilient food crops will no doubt help to reinforce the idea that robots may become a necessary tool in agriculture — at least for the time being.

SHARE THIS STORY
RELATED STORIES
OpenSSF Aimed to Stem Open Source Security Problems in 2022 GPTZero: An App to Detect AI Authorship How New Sony AI Chip Turns Video into Real-Time Retail Data State of the API: Monetizing API Deployment Is on the Rise Generative AI: How Companies Are Using and Scaling AI Models
SHARE THIS STORY
RELATED STORIES
Why Trust and Autonomy Matter for Cloud Optimization Learning Storage and Retrieval with a Hash Function A Platform Team Product Manager Determines DevOps Success Azure Went Dark Improve the Quality of Your APIs with Spectral Linting
THE NEW STACK UPDATE A newsletter digest of the week’s most important stories & analyses.
The New stack does not sell your information or share it with unaffiliated third parties. By continuing, you agree to our Terms of Use and Privacy Policy.