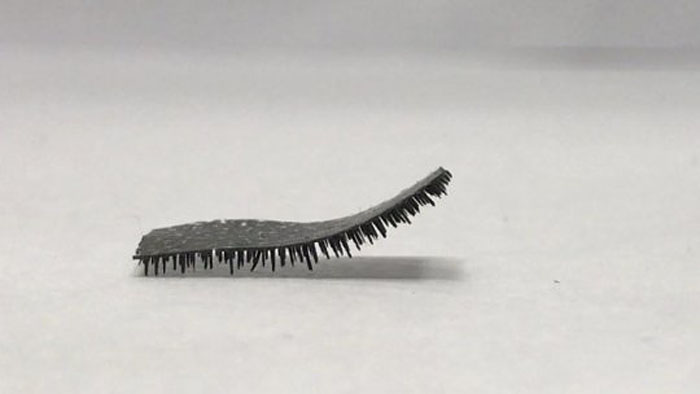 Small robots are gaining more attention as researchers find new ways to implement them, whether it’s in high-speed precision manufacturing on the millimeter-scale; or using microfluidic robots for precision surgery, or cancer-fighting bots made out of algae.

Now researchers over at City University of Hong Kong have engineered a tiny, millimeter-scaled soft robot that looks a bit like a caterpillar and which is designed to crawl around in harsh environments — both wet and dry — such as inside the human body, in order to deliver drugs or perform medical procedures. Take a look:

As one can see, this creepy-crawly bot gets around thanks to its multitude of pointy little legs that measure about 1 millimeter long. Coming in at 17 mm long, 7 mm wide and about 1 mm tall (0.7 x 0.3 x 0.03 inches), the robot’s size is deliberately designed to emulate the leg structures of multi-legged, ground-hugging animals, especially how these legs are in proportion to the body, as well as the proportional gap in between them.

“Most animals have a leg-length to leg-gap ratio of 2:1 to 1:1. So we decided to create our robot using 1:1 proportion,” explained the paper’s lead author Dr. Shen Yajing, an assistant professor of biomedical engineering, on ScienceDaily.

In particular, this biologically inspired design eliminates friction up to 40 times less compared to similar legless robots by significantly reducing the areas of surface contact.

The squishy device is made out of a silicon material called polydimethylsiloxane (PDMS), which makes the robot repel water, using a “modified magnetic particle-assisted molding approach.” The silicon is mixed with hexane and magnetic particles and put into a mold. During the curing process, an external magnetic field is used to “pull” out and form those tiny legs, and the object is then separated from the substrate. 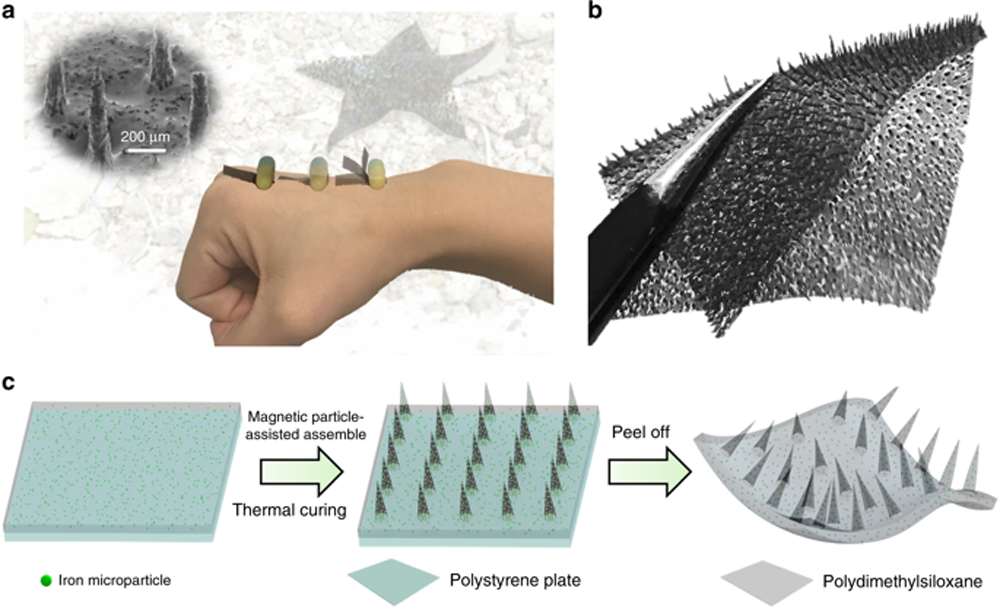 In order to make it move, a magnetic force is applied in different patterns to make this magnet-embedded device move in specific ways. For instance, a magnetic force can be applied in a “flap propulsion” pattern to compel it to move forward in a flapping motion, while a magnetic force done in an “inverted pendulum” pattern will cause it to ‘swing’ itself forward by alternating steps to one side, and then the other.

“When a magnetic field is applied, both magnetic torque and pulling force will be generated,” the team wrote in their paper, published in Nature Communications. “Thus, the tapered feet are deformed and align with the direction of magnetic flux, and the robot moves forward displaying various postures, in response to the combined action of the magnetic [forces].”

This robot was specifically made in a way that will address potential issues when it is deployed in places such as those found within the variegated interior landscape of human anatomy.

“The rugged surface and changing texture of different tissues inside the human body make transportation challenging. Our multi-legged robot shows an impressive performance in various terrains and hence open wide applications for drug delivery inside the body,” said mechanical engineering professor Wang Zuankai, who assisted in the project’s conception. 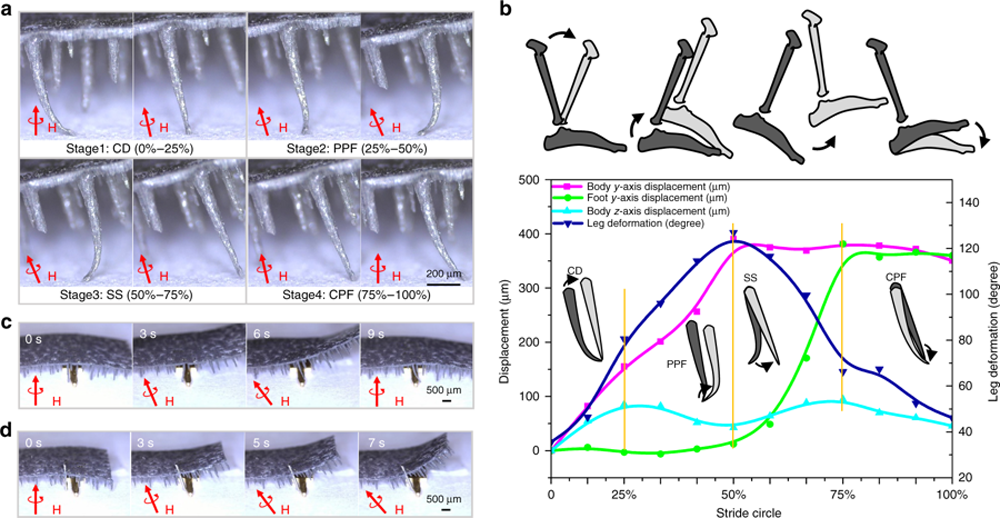 Interestingly, the robot’s design has given it versatile powers that help it to overcome seemingly insurmountable obstacles. For example, it’s able to bend itself up to a 90-degree angle in order to cross over an obstacle that’s ten times larger in size than its leg length. Also, when the frequency of the applied electromagnetic field is increased, the bot can also speed up its movements in response. In addition, the robot has a much larger carrying capacity than its tiny size would suggest: according to the team’s experiments, it can hoist a weight up to 100 times heavier than itself (to give you a better analogy, it’s like a human lifting up a mini-bus).

According to the team’s paper, compared to previous small-scale soft robots, this robot demonstrates an exceptionally strong load-carrying and self-supporting capabilities, relative to its soft body, even in troublesome environments where it might be wet or full of barriers. In comparison to similar millimeter-sized devices, this bot moves with greater degrees of freedom, but requires less energy to do so. In the future, the team plans to work on creating the robot out of biodegradable materials, as well as testing different designs for the form and features.

SHARE THIS STORY
RELATED STORIES
Devs Most Likely to Learn Go and Rust in 2023, Survey Says OpenSSF Aimed to Stem Open Source Security Problems in 2022 Streamline Event Management with Kafka and tmctl 5 Security Principles to Guide Your DevSecOps Journey GPTZero: An App to Detect AI Authorship
SHARE THIS STORY
RELATED STORIES
Anil Dash on Mastodon Joining Fastly’s Open Source Program Azure Went Dark Entrepreneurship for Engineers: Avoiding Feature Bloat Boost Customer Engagement with Real-Time Data 5 Security Principles to Guide Your DevSecOps Journey
THE NEW STACK UPDATE A newsletter digest of the week’s most important stories & analyses.
The New stack does not sell your information or share it with unaffiliated third parties. By continuing, you agree to our Terms of Use and Privacy Policy.