Crowdfunding a ‘Theory of Everything’ 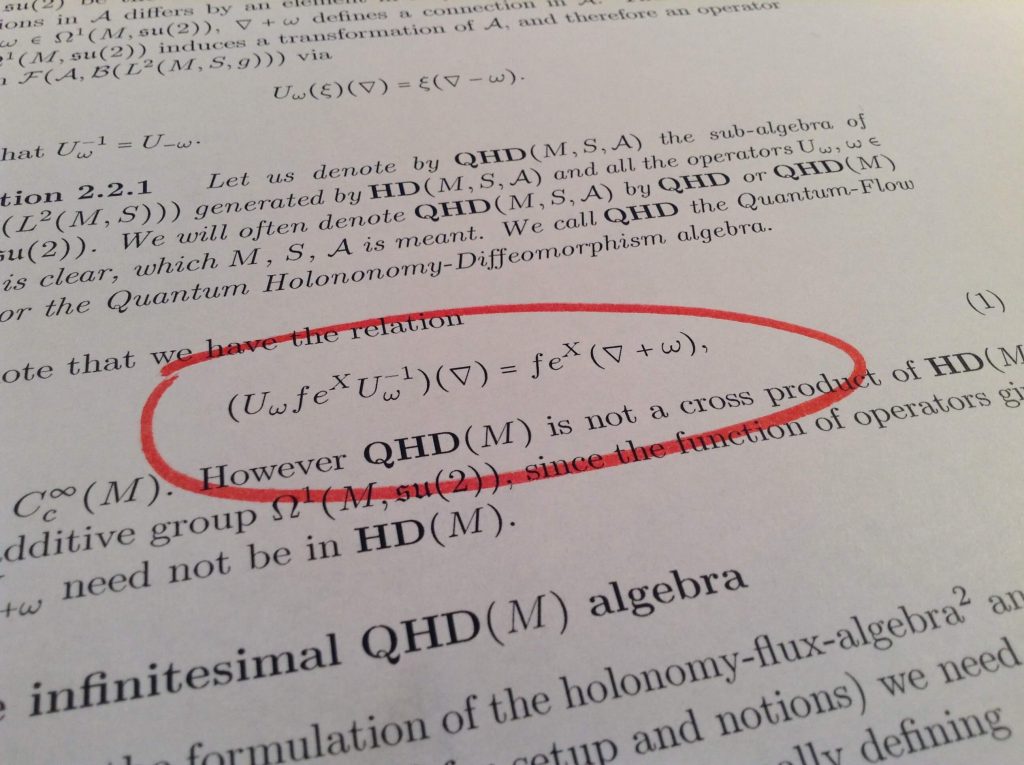 Albert Einstein “spent the last 30 years of his life searching for an answer to the deepest question about the universe: does a fundamental principle, that governs all of reality, exist?” according to two Danish academics. Einstein formulated the general theory of relativity while subatomic particles seem affected by electromagnetism and other forms of attraction. But current scientific wisdom has it that general relativity and quantum field theory “cannot both be right.” Usually, one theory is applied to molecular transactions, while another to massive masses. But that still leaves some things that simply can’t be explained — like black holes (and parts of the big bang theory).

Calling it “the holy grail of modern physics,” theoretical physicist Jesper Moller Grimstrup and mathematician Johannes Aastrup spent 10 more years researching the question, and in 2013 discovered a rich but simple mathematical principle which they believe could finally provide that elusive answer. Their “quantum holonomy theory” has never been investigated, and they believe that “If our hypothesis is true it will revolutionize not only physics but science in general and beyond.”

Now they hope to bring together the forces of the universe — if they can bring together a crowd of donors on the internet. They’ve launched a campaign on Indiegogo to raise $30,000, and 251 donors have already kicked in nearly $27,000 (with another month left to go).

Almost equally as interesting as their theory is the possibility that the next chapter in theoretical physics may require a crowdfunding site. But Jesper Møller Grimstrup says on the page that he’s already sold his flat in Copenhagen to fund a continuation of their research — and also tapped his personal savings. “We believe very deeply in our research,” reads the campaign page, “and in the aspiration towards a final theory. We have given everything we’ve got to get this far.” They explain that it may take up to five years to complete their work, and it’s difficult to secure funding for such a long-term project that’s outside the mainstream of theoretical physics. “This leaves us in the unusual situation where we have obtained very strong results while at the same time are running out of money.”

It’s similar to a problem reported by astronomers who turned to Kickstarter after realizing that the projects being funded were “usually ‘safe’ ones with certain and immediate returns.” And this campaign’s page even quotes one Caltech professor who predicts we’ll see more crowdfunding of theoretical physics projects, “given the current menacing trend that is transforming universities into corporate business machines, grade factories, and shopping malls, with fast disappearing funds for fundamental research (and for anything of intellectual value).”

But it’s still a little jarring to see cutting-edge researchers going online to hawk mentions in scholarly publications. One donor has already pledged $10,000 to receive the campaign’s top perk — having their contribution acknowledged on the title page of future publications while two more donors have pledged $1,000 to be acknowledged elsewhere in the publications. And three donors pledged $500 for acknowledgments on the cover of a book to be written about the research.

Of course, there’s always the possibility that their research turns out to be a dead end, but their campaign’s page says “We are however certain that no matter what happens this project will generate a steady flow of scientific output.”

But, in the end, there’s a common curiosity that’s driving both the donors and the researchers. “The reconciliation of quantum mechanics with Einstein’s theory of relativity is the most important unsolved problem in modern theoretical physics,” they write on the campaign’s page, adding that the theory “is believed to hold the key to some of the deepest mysteries about the universe and its origin.”

And you get a sense from the campaign’s official video that this quest is a very personal journey. “All these questions I think are different manifestations of our basic human curiosity,” Jesper explains in the video. “I mean, this is a part of our DNA. We simply seek knowledge. We want to know. We want to understand…

The New Stack is a wholly owned subsidiary of Insight Partners, an investor in the following companies mentioned in this article: Indiegogo.