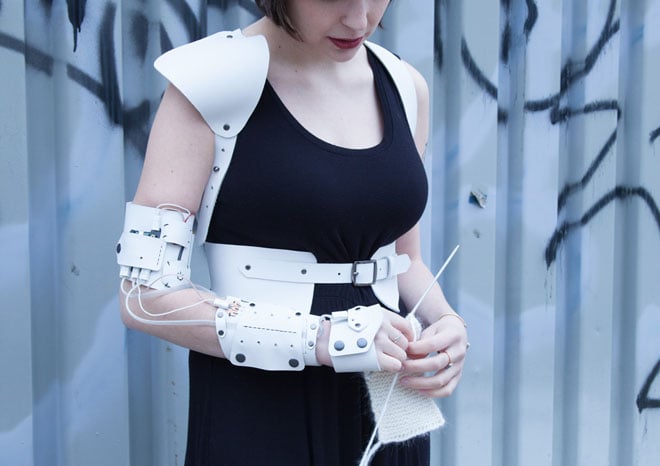 Knitting by hand has long been a craft necessary to not only self-sustaining households making their own garments. In recent years there’s been a resurgence of interest in the craft, thanks to the maker and DIY movements. Though it’s mostly considered a low-tech hobby with a refreshing lack of gadgets in a world inundated by them, Brooklyn-based interaction designer and self-professed “circuitry seamstress” Teresa Flour Lamb has created Cyberknitics, a wearable harness that translates the rhythm of knitting into audible music. 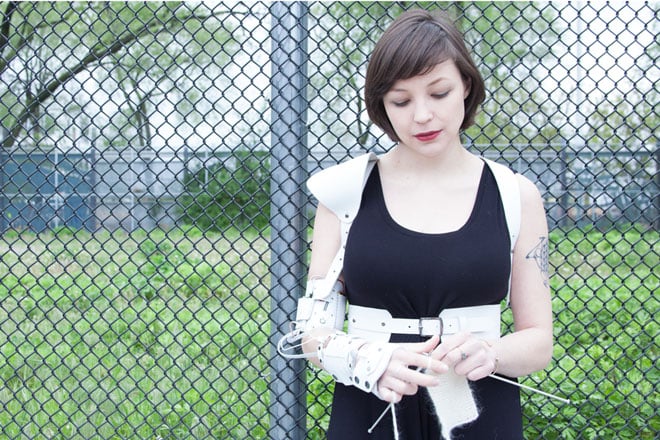 The Cyberknitics wearable (an appropriate play on the word “cybernetics,” of course) consists of leather coverings which wrap around the user’s arm. The portion that covers the hand is stitched with an accelerometer and gyroscope, which tracks the subtle movements of the hand. This interfaces up to the forearm component, which  includes a Teensy, a USB-based microcontroller and a lithium polymer battery charger.

These assemblies are then connected to a thick leather band wrapping around the upper arm, which houses a Teensy audio adapter board, which goes on further up to connect to a small speaker hidden behind a shoulder pad. The entire system of circuit boards — some of them premade and some of them designed by Lamb herself — is stitched by hand with conductive thread, and is made to be modular, flexible and comfortable. Watch Cyberknitics in action: 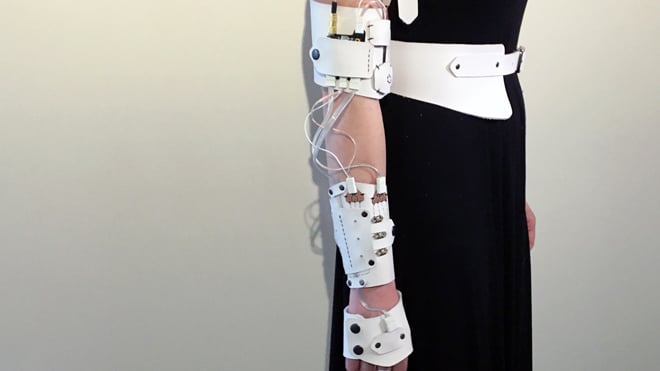 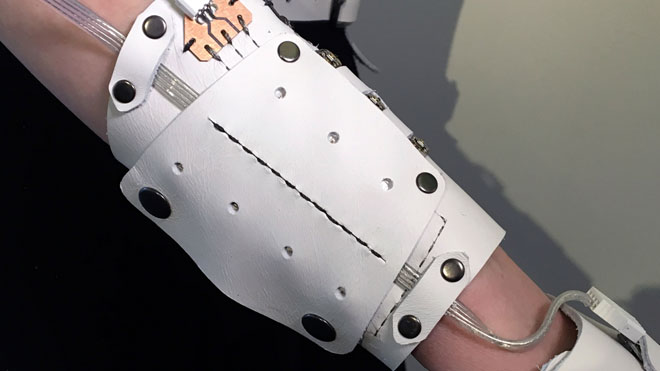 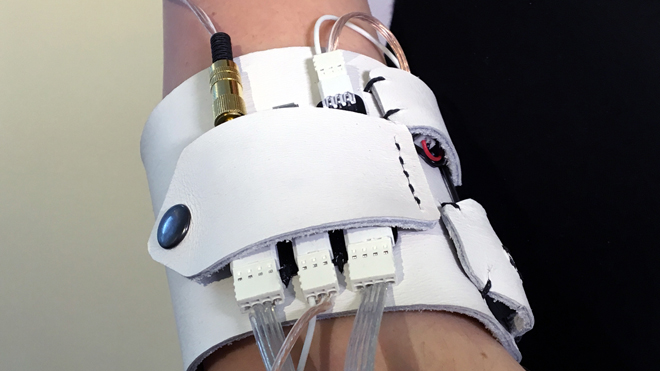 The idea here is convert hand movements made during knitting into ethereal electronic music that is heard by the knitter. “As the wearer knits, they can hear their own rhythm and respond to it,” said Lamb. “Buttons on the forearm allow the user to alter the sound. The sound produced can be heard through a speaker or headphones.”

While it may seem like a neat gizmo, there’s something deeper here than merely making of music out of knitting motions. As in cybernetics, which studies processes of communication, regulation and feedback, the Cyberknitics project attempts to make users even more conscious of the dynamic movements generated by knitting, explains Lamb: “The music is meant to inspire a stronger connection between the knitter and their process, and to invite the audience to engage with the spiritual practice of creating something from nothing.”

The depth of the project comes when one sees the act of knitting in its context, as Lamb learned. Surprisingly, Lamb is a newcomer to knitting, and became interested in the practice out of necessity. After having moved from Florida to attend New York University, she took up knitting to make her own winter clothes. In joining a knitting circle, she discovered a new sense of community, as well as the calming, meditative effects of knitting itself. She also saw similarities between the process of knitting and coding.

“When I started learning to program at [NYU’s Interactive Telecommunications Program] I discovered a strong connection between knitting and programming,” she writes. “There was a very similar logic, with arrays, algorithms, and shorthand.”

As Lamb continued to learn more about coding and user research, she wanted to apply these new perspectives to the aspects of knitting that she found most appealing: the way it promoted mindfulness and relaxation, communal sharing and empowerment in the sense that knitting is a form of expression that is also quite practical. “[Knitting] fills a basic human desire that transcends its utility,” said Lamb.

Lamb’s thesis behind Cyberknitics also probes into the future evolution of knitters: who will they be? What will be the identity, motivations and tools of future crafters?

That question prompts yet another question: will cyborgs and other augmented humans of the future still find solace in the clicking and harmonious melodies made by sound-generating knitting systems such as this? Lamb envisions that like today’s knitting communities, the cyborg knitting circles of tomorrow could use something similar to the Cyberknitics system to knit together, generating melodious, communal experiences that will continue to soothe and empower.