Cycloid is a hybrid cloud management platform to help smooth the path between dev and ops teams and enhance DevOps skills with existing employees.
Feb 1st, 2022 9:04am by Susan Hall 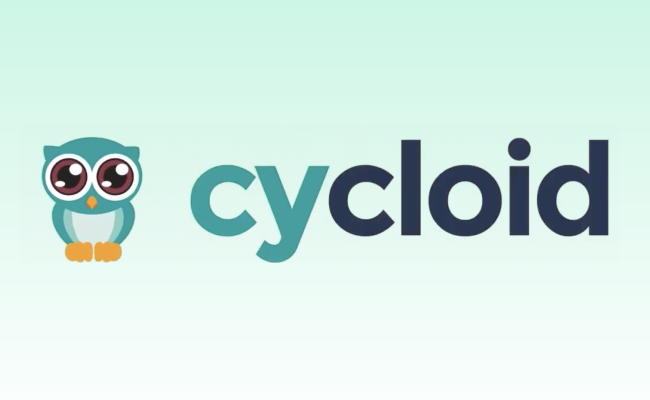 There was so much frustration because the developers kept opening tickets and the ops team was afraid to give developers access to automation for fear they would break things.

At the same time he discovered he really loved Kubernetes, though the managed provider’s customers would just plunk their applications on the cloud provider without any refactoring.

“When it comes to migrating on the PaaS (platform as a service), which was an OpenShift back at the time, we always saw the same situation. They always had a reason to [not] move on Kubernetes, you know: ‘We don’t have the people that made the application anymore.’ Or ‘it’s too complicated.’ ‘It’ll take too long.’ And finally, ‘it’s working on the cloud provider [as it is],’ even if they pay more. … Because they do lift and shift. If you don’t refactor, then you pay more than your traditional hosting,” he said.

“I saw that we really need to have these people working together, in a more smooth way, in this kind of DevOps world that nobody understands. You know, there is one person that is working on DevOps and the 99% of the rest of the world doesn’t understand what happens.”

Brial, the former Red Hat EMEA cloud manager, created Paris-based Cycloid in 2015, a hybrid cloud management platform to help organizations smooth the path between dev and ops teams and enhance DevOps skills with the employees they already have.

In Puppet’s 2021 State of DevOps Report, a survey of 2,650 IT, development and information security professionals, found that 83% are implementing DevOps practices, to a degree. However, only 18% of respondents were working for organizations with highly evolved, automated DevOps processes in place.

In fact, 80% of organizations are failing to scale DevOps adoption, a number that hasn’t changed for four years. And the biggest hurdles to DevOps adoption continue to be cultural more than technical.

Among its findings were that the most highly evolved organizations in Puppet’s DevOps models are adopting a platform model that enables self-service and existing automation for developers and curates the developer experience.

The Cyloid platform consists of service catalog where the DevOps professional define the infrastructure for various environments and the governance applied to workloads on those sites. It enables self-service for developers planning to deploy to those sites, though they don’t have to understand all the nitty-gritty details underneath those deployments.

Cycloid uses the concept of stacks, which are a way to build and organize your infrastructure as code. You create a generic description of your application that you will use across all projects and environments. This is a sort of service catalog in which users employ only a few configurable parameters based on their needs.

Associated with a stack, a config or configuration spells out the details to be used with a particular environment. It uses the example of a LEMP stack (Linux, NGINX, MySQL, PHP) in which the stack outlines all the common elements between all the environments in which it will be used, for instance, IaC servers on which you install an Nginx web server and PHP, connected to a database.

A pipeline is core to a stack, describing its workflow, how to create the application and how to automate and orchestrate the deployment of new releases.

Meanwhile, the config YAML file spells out the details for a specific environment, such as dev, staging, prod, which in the LEMP example might vary in the number and the size of the servers to create.

Projects might all use the same stack, but the config might vary. The stacks and configs are stored as git repositories, either public or private.

This creates a catalog of options addressing various needs that can be applied consistently across projects and teams to ensure best practice. Its Service Catalog feature offers a selection of stacks that have been created by its community, as well as a place to store reusable resources that you’ve created for your team. 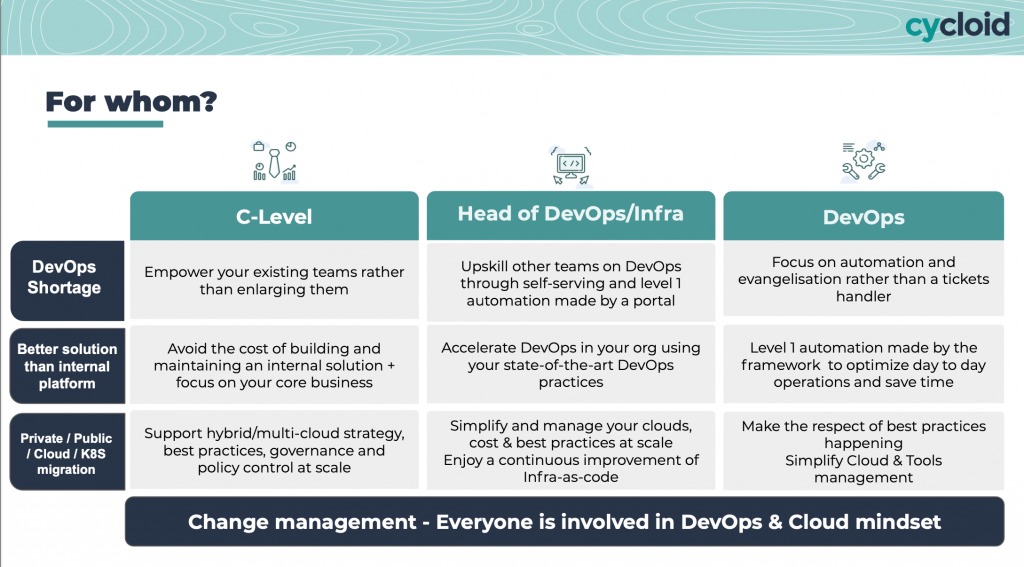 It created StackCraft, a WYSIWYG cloud visualization tool that lets you drag and drop your desired cloud configuration and see and interact with abstract resources. Once you’ve got it all to your liking, StackCraft will generate a Terraform file of infrastructure as code (IaC) that can be used to create infrastructure in your cloud provider of choice.

Stackforms provide DevOps engineers and solution architects a way to conceal governance while providing users self-service options for basic environments with HCL or YAML-based customizable widgets. Users see only what’s relevant to their work without having to deal with the preset nuts and bolts underneath.

It enables project managers without specific IT production skills to create and configure the IT environments according to governance rules predefined by IT: preferred cloud(s), regions, type of virtual machine, size, etc.

“By offering a catalog of configurable resources via a one-stop-shop, the CIO provides the means to fully control IT and the associated costs”, concludes Guillaume Renaud of Orange Business Services told JDN.

TerraCognita automatically reverse engineers existing cloud infrastructure into Terraform code based on Terraform providers built by the community. So far, it works on AWS, GCP and Azure but integrations for Alibaba, VMware and OpenStack are in the works.

It’s the basis for Cycloid’s Infra Import tool, an infrastructure-as-code generator that converts manually deployed cloud infrastructure into Terraform files and related Git modules. Once it’s converted, you can create stacks to reuse and enforce governance on the technology with Terraform’s best practices.

InfraView presents the infrastructure in a visual way to help people without specialized knowledge see the various resources and how they relate to each other. It uses tfstate or HCL files to generate a graph specific for each provider, showing only the most relevant resources. 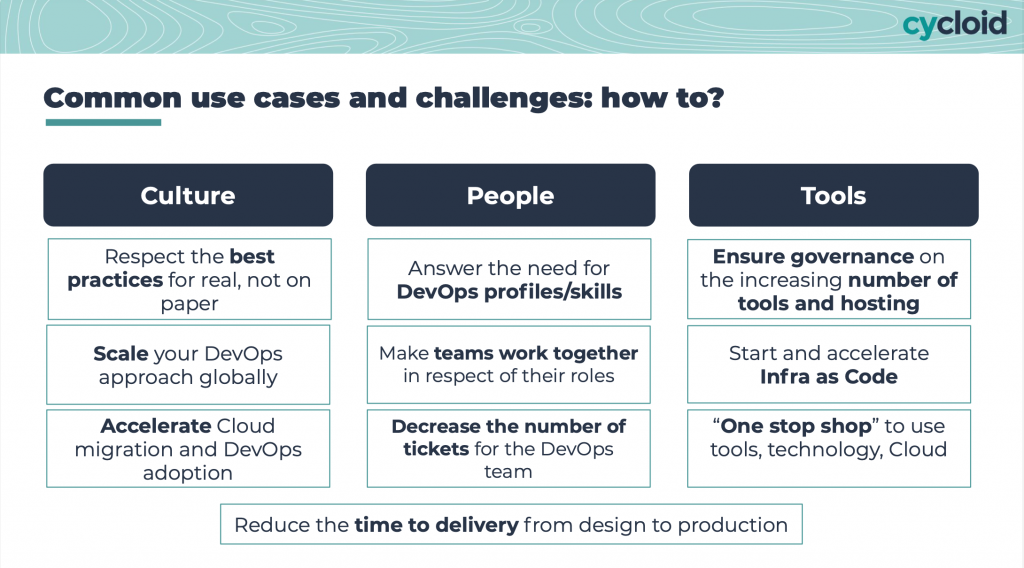 Using a command-line interface, InfraCost uses a Go library to estimate cost for cloud projects before they go live. It is intended to be imported and used by programs (APIs or standalone) with access to a MySQL-compatible database and the internet.

Too often IT leaders discover the cost of projects in the cloud when they get the bill. Companies like Harness and Unravel Data have rolled out cost-estimation tools, as well as the providers, like the Amazon Web Services‘ AWS Cost Explorer.

“With your solution architect or your DevOps, you design your application, and then maybe you will know how much it cost. But it takes a lot of time, a lot of effort for everyone,” Brial said.

Cycloid uses the service catalog to set costs according to the pattern being deployed, a cost that will change as variables change.

“We wanted to bring in this world, the capability to have some cost estimation before you deploy the project in a simple way,” he said.

Though there are various hybrid cloud management platforms out there, including CloudBolt, Morpheus Data, VMware vRealize and Cisco CloudCenter, Brial said Cycloid’s closest competitors are those do-it-yourself platforms that companies build internally. Those take a lot of work and maintenance and generally end in frustration, he said.

Customers or potential leads tend to compare Cycloid to GitHub or GitLab, though Brial contends they are not direct competitors. His problem in particular with GitLab is its path toward replacing the tools that companies are already using. He maintains that won’t work because nothing is better than open source. And enterprises especially want to talk about federation — incorporating what they already have.

“They may have [just taken] three years to integrate Jenkins, with the good and the bad things with Jenkins. You can’t arrive and say, ‘I will replace the Jenkins because I made something better.’ It’s not possible. You don’t just close the topic; they don’t want to reopen it,” he said.

One of its big projects for the next quarter is developing an inventory manager to be a single source of truth, in terms of what is being used on the cloud provider. That’s not as simple as it sounds, he explains. It’s also working to integrate with major IT service managers like ServiceNow to define workflow and project management.

“We have a strong organization where we believe that traditional top-down doesn’t work anymore. If you want to have committed people … we do prefer to empower them, and work together rather than they work for me. And this is a big difference, which I do believe, [but] it’s also a challenge,” he said.

“With over 120,000 virtual machines under management, 2,400 DevOps experts on the books, and 70 data centers over five locations, our situation was a delicate, time-consuming puzzle,” explained Pierre-Emmanuel Klotz, head of managed services at Orange Business Services.

“Cycloid acts as a cornerstone for all our tools, bringing the visibility to show us things we didn’t know before, and the frameworks to get the most out of things we hadn’t mastered previously. Using Cycloid, we can move four times faster on projects and accommodate existing tools, or whatever tools our customers want to use, instead of forcing them to adapt to a new set of tools, standards and solutions.”

Susan Hall is the Sponsor Editor for The New Stack. Her job is to help sponsors attain the widest readership possible for their contributed content. She has written for The New Stack since its early days, as well as sites...
Read more from Susan Hall
Share this story
RELATED STORIES
Turbocharging Ruby on Rails with 'HTML Over the Wire' Unqork Opens Marketplace to Third-Party Developers How Optic Detects NFT Fraud with AI and Machine Learning When Wasm and Docker Work (and Do Not Work) Together 25 Most Popular Programming Languages Used By DevOps Pros
Share this story
RELATED STORIES
Monitoring Developer Metrics: Team Approach Is Best Do Your Cloud Apps Need a CNAPP? First Line of Defense: Developer Security Tools in the IDE Key Metrics for DevOps Teams: DORA and MTTx Scribe Security Releases Tools for Integrity Validation
THE NEW STACK UPDATE A newsletter digest of the week’s most important stories & analyses.
We don't sell or share your email. By continuing, you agree to our Terms of Use and Privacy Policy.
Amazon Web Services, Red Hat and VMware are sponsors of The New Stack.